The magic of SimCity has returned

The connection between the design and implementation of the sidewalks and streets we use on a daily basis requires a huge mental leap for me. Walking down the cobblestone in my city and looking up to see the sky framed with highrises inspires my sense of awe. It’s as if they represent humanity’s dominion over the natural world, and seem to stand as a testament to our species’ tenacity. It’s as if their monolithic forms are a raised fist against all the devastation and hardship we’ve experienced as a whole since we left the fertile crescent over 60,000 years ago.

To make a city of our own, to imitate and create the spaces in which we live our lives is quite alluring. The nurturing and planning that goes into creating your own little virtual metropolis is naturally stimulating to the desire to solve problems that most of us find so innate. For more than a decade, Maxis’ SimCity series was the go-to for a city-building fix. However, the changes in the latest iteration of the series were very unpopular, and begged the question, “Is the city-building simulation genre dead?” Cities: Skylines answers with an emphatic, “No,” and goes beyond what even the venerable SimCity series had to offer. 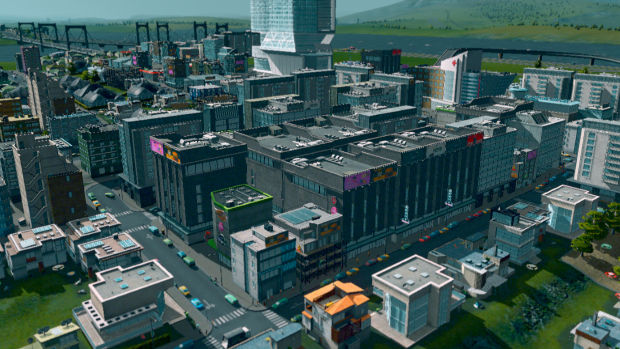 For those who are fans of the SimCity series, Cities: Skylines is an easy jump as far as game mechanics go. The initial actions to create each city will be much the same. You are mayor of a burgeoning village and there is a specific set of requirements to ensure the initial happiness of your townsfolk. First a connection must be made to the road system, then a simple power system and water supply must be routed to the site of your future homes and businesses, and finally you can zone your first residential area and watch all the little houses start popping up.

From there you’ll engage in the delicate balancing act between residential zones, industrial zones, and commercial zones. Citizens need jobs and goods to buy. Commercial businesses need employees and citizens to sell to. Industrial facilities need workers and businesses to supply. Take one of these out of the equation and you’ll begin to see unhappiness spread throughout your city. It all seems so simple, until you start adding the myriad of other components that slowly show themselves as your city ages.

Running out of money is an ever-present danger in Cities: Skylines. If you spend too much you may run into the red and never recover. If you spend too little, you run the risk of slowing the growth of your town. I loved the unforgiving budget dynamic. It added so much challenge without being unfair, and making the hard choice between my citizen’s happiness and the need to tax so the coffers would remain full was always a struggle.

Making sure that people can get where they need to go in a timely matter is a major concern for any city planner. I made the mistake of going the cheap route in the early days of my mayoral career and connecting the core chunk of my township with simple two-lane roads. As I expanded, I neglected to go back and upgrade to four or six lanes, and by the time I was expanding into newly annexed territory to begin laying high-density residential and commercial areas, and offices, my core industrial complex was rapidly filling with abandoned buildings. As my industry output grew with my population, I failed to realize that the narrow roads kept products from getting where they needed to go, and because they couldn’t sell anything, my factories shut down one by one.

Keeping an overall plan in the back of your head during the entire life of your city is essential to success in Cities: Skylines. Although my overall grid-style layout served to make zoning simple, my failure to cope with my traffic problem ended up costing me major tax profits when I had to tear down almost every one of my factories to widen the roads. I ended up eventually running out of cash, and although I was able to take out several loans, I couldn’t recovery and my city slowly stagnated and population started declining. 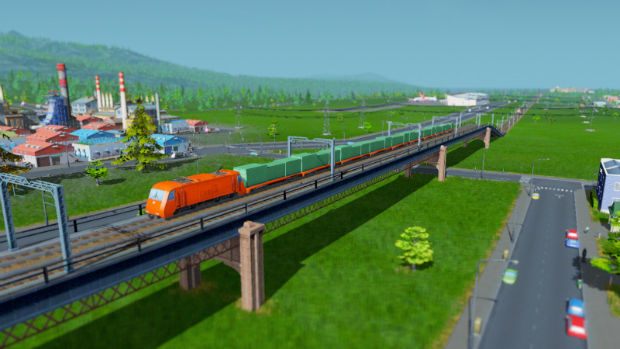 This is but one scenario that could lead to many hours of time lost. However, the difficulty is one of the things that makes the game feel so good. Seeing your city grow from a few houses to a skyscraper-filled megacity is extremely satisfying. Even more so because Colossal Order added something Maxis dreamed of for years: integrated citizen simulations. Your citizens are not just random background blobs.

Clicking on them gives you a name, where they live, where they work, and parts of their background, and it’s all dynamic and real. You can watch your citizens actually go to the same home, go to work, shop, and go about the minutiae of life each day. Also, there is a spoof Twitter feed at the top of the screen that is the primary way citizens communicate with you. Seeing their opinions on my actions lent an interesting twist to what could have been a generic adviser panel.

Unfortunately, with my hands full building and managing the city, I did not get a chance to see just how persistent these citizen simulations are, or if they’re capable of producing offspring. In the next city I build, though, I will take time out to just watch my citizens and their lives as opposed to jetting around the map.

As is natural for a title with this scope, there are a few bugs and frustrations. When building roads and train tracks, I found that if I had to come back to expand a current path or finish an incomplete one, sometimes it was a pain to get the new paths to connect to the old ones without stating “there is already an object here.” Eventually I was able to overcome any problems with that, but it can be a little too time consuming to have to wrestle with the whole thing. 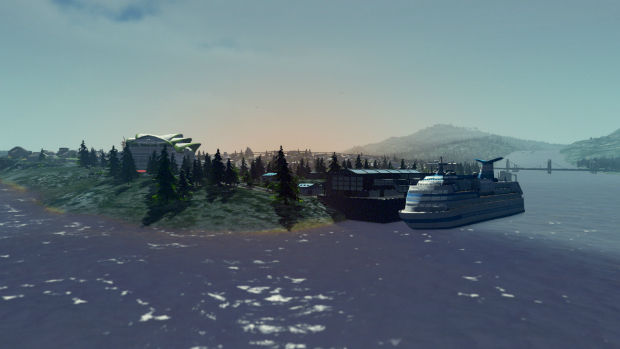 Citizens’ tweets can be inaccurate as well. I had the same person tweet me that they were having water problems and upon checking the water availability overlay, there were no areas that weren’t receiving clean water. This was another bug that wasn’t a huge deal in the long run. However, with a game that depends so much on your inhabitants’ happiness to assure your success, it caused me to freak out a little too much.

Cities: Skylines not only returns to the ideals which made the city-building genre so popular, it expands them. I enjoyed every minute I played this title, and the planning, building, and nurturing of my city brought forth imagination and creativity from me like few titles ever have. If you’re a long-time fan of the genre, or just wanting to try it out, you can’t go wrong with this game.

There’s a bit of universal appeal that comes with building and maintaining your own virtual city, and for a while I thought that magic had left the industry. I was wrong. Cities: Skylines is a title that will eat up hours of your time, and with a commitment from the developers to continue support for the title in the future, and Steam Workshop integration, the huge amount of replayability the base game has will become even bigger. I wholeheartedly recommend this game and can’t wait to see what modders and Colossal Order have in store for us in the future.