Ever since a badly-dubbed lady popped out of a dumpster on the moon, sending a weird computer-man to seek “teenagers with attitude,” geeks of a certain age have been on the lookout for a game that can capture the essence of what it means to be a Power Ranger, and more broadly, a fan of Japan’s tokusatsu superhero genre.

Well, it’s here now, and after playing it, I can say that about the only thing Behold Studios could’ve done to make Chroma Squad even more authentic in the love it shows for Super Sentai and tokusatsu is put a fat clock in the corner of the screen.

Not that they really needed to, of course. Such a “feature” would interfere with play, and there’s plenty of service in the game as it is for fans. The play, in this case, is of the turn-based tactical variety, as if Behold took XCOM and ran it through the parodic, pixelated filters of Knights of Pen and Paper.

Like the former, players will manage a small squad of combatants, with unique classes and abilities, running them up against groups of goons and the occasional boss, one turn at a time. Like the latter, every mechanic serves as a distillation of tokusatsu‘s essence through heavy referencing and a clear, almost palpable appreciation of the source material.

The premise alone is ripe enough with potential that it’s baffling more games haven’t taken advantage: Players manage a fledgling production studio, with each mission treated as an “episode” of an upstart spandex superhero show. Names, casting, and even catchphrases are up for customization, as well as the requisite selection of bright primary colors to outfit the roster with. If players want to commit sentai sacrilege and name a non-red-colored character the “Lead,” no one can stop them but their inevitable guilt (guilt, I say!). Cast members can also be selected from a pool of actor candidates, each with their own special qualities.

When the cameras start rolling and the minions exit wardrobe, the fight is on. The goal of any given mission is to amass as much “audience” as possible, by performing flashy attacks, fancy stunts, and of course, winning the fight. Additionally, optional “Director’s Instructions” add extra conditions, such as finishing off boss monsters with a screen-filling finishing move, or not killing off the boss before dispatching the cannon-fodder minions. Such extra goals help introduce variety to the combat, which is more simplistic than one might find in XCOM or other dedicated tactical titles.

Enemies follow simple patterns and lack much in the way of extra abilities, so most of the tactics devolve to crowd and ability cooldown management rather than more elegant stratagems. Chroma Squad‘s main mechanical wrinkle comes in the form of “Teamwork,” which allows squad members to leapfrog over each other to boost their movement range, or carry out simultaneous attacks with adjacent teammates. This, alongside somewhat simplistic giant-mecha boss battles, give the game enough of a unique flavor to override its otherwise thin tactical substance. 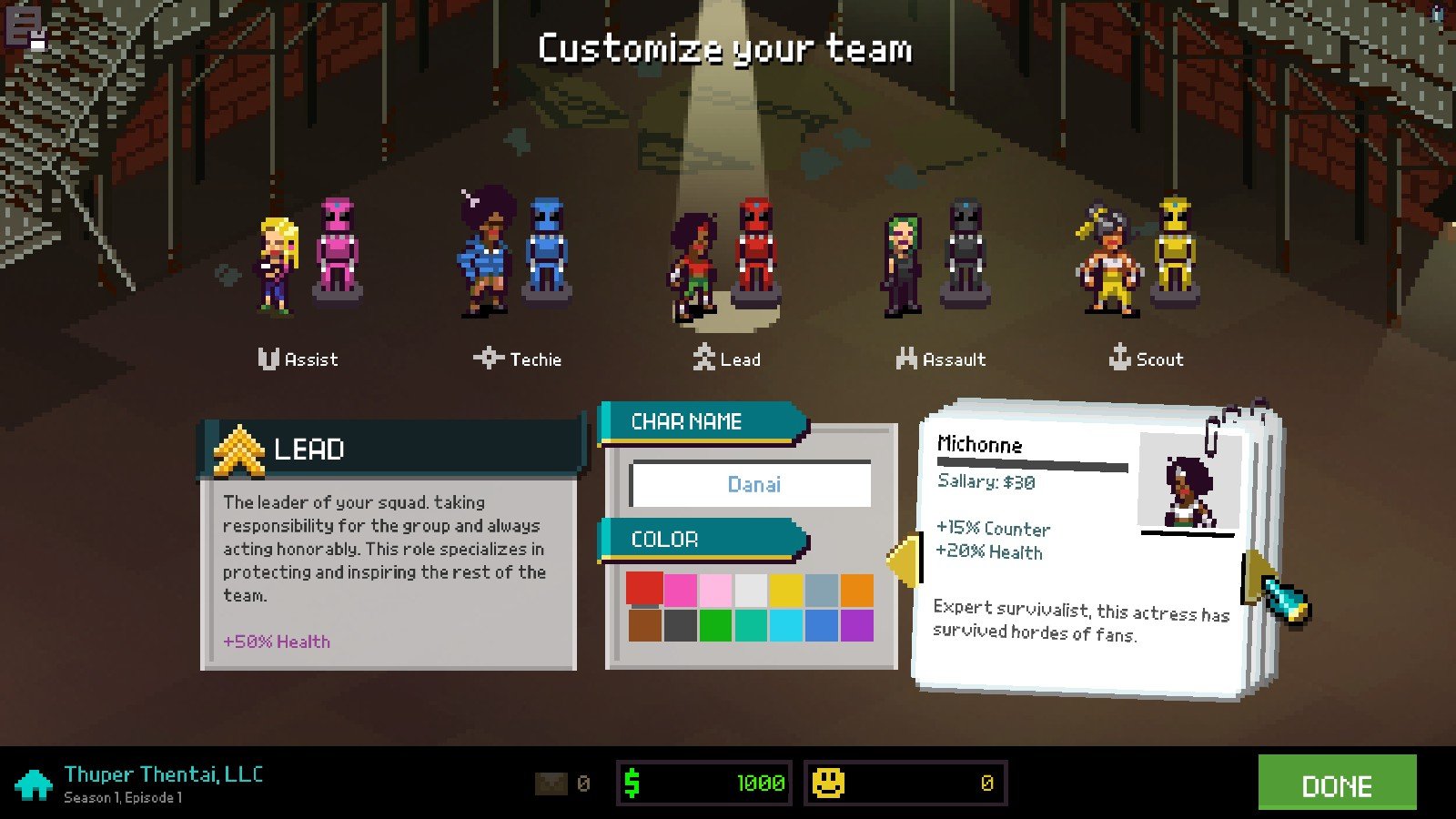 Following the mission, gained audience is converted into “fans,” and also into increased studio funding, the better to buy one’s way out of Papier-mâché costumes and into some real spandex duds. Behind the scenes, the studio itself can be outfitted with various upgrades that improve performance in each episode. Buying health care for the actors improves their health in combat, and improving the lighting on set reduces enemies’ chance to dodge or counter blows.

Materials dropped in combat can also be used to craft customized gear with semi-random statistics, a useful (and cheap) alternative to costly store-bought costumes and weapons. Fan mail can be answered for flavor and smaller benefits, and players can even choose marketing agencies to confer more benefits. Going with a niche-market enthusiast firm might increase the amount of fans gained after an episode, but will likely lack the mass-audience-gathering benefits of a more mainstream advertising push. Tradeoffs like that characterize much of Chroma Squad‘s meta-game. 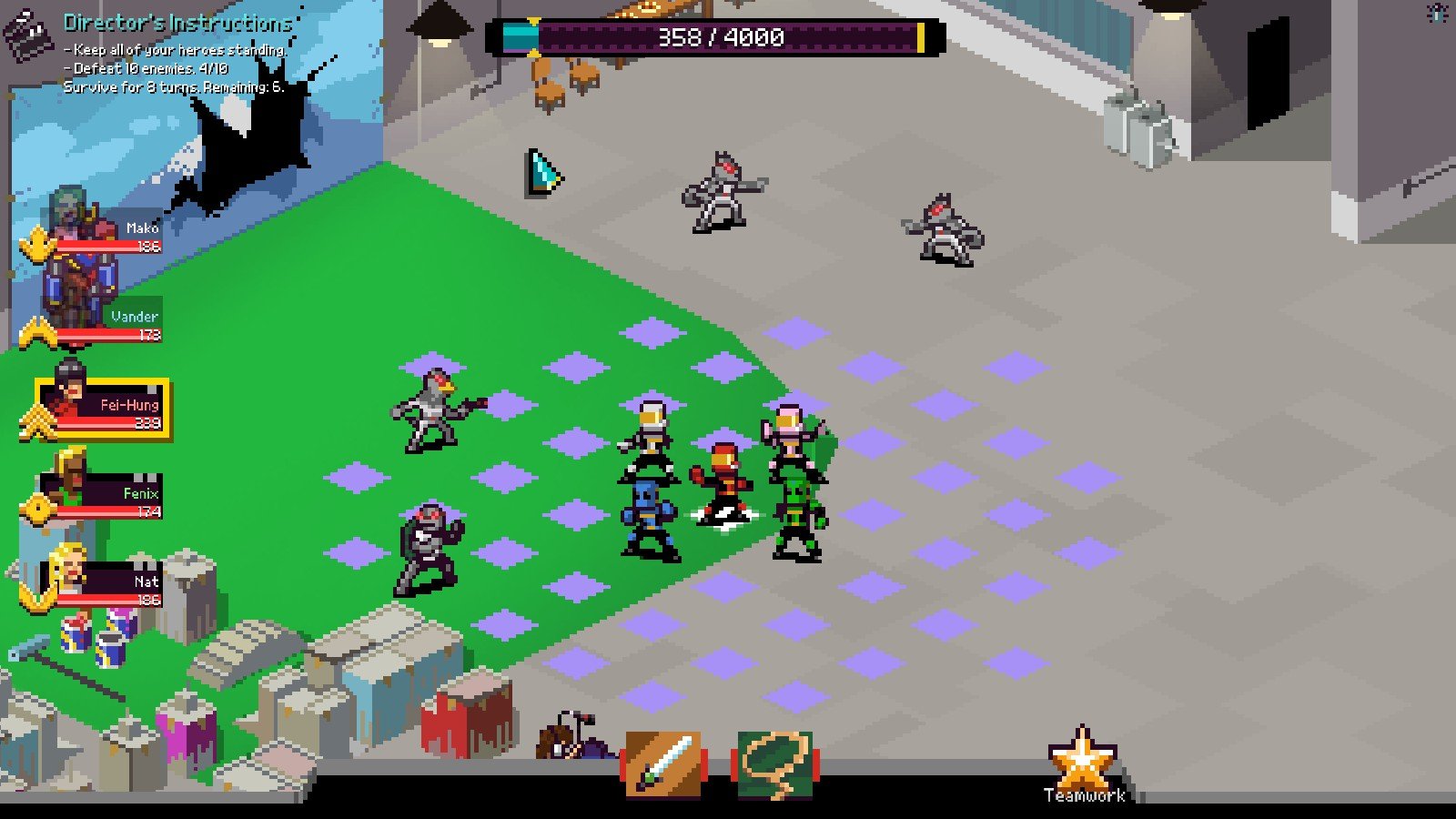 Speaking of meta-things, the game’s narrative and missions regularly break the fourth wall, and form one of the game’s potentially divisive aspects. While the self-aware script and obvious understanding of tokusatsu‘s many conventions and tropes lend it an endearing level of charm, some players might be turned off by references to dated Internet memes and other metahumor. Personally, I found the story hit quite a bit more than it missed, but I will admit that at times the dialog read more like a forum chat log than a script, and wasn’t always helped by rough spots in the localization and editing. Then again, it’s not like tokusatsu attracts its fans for complex plotting and characterization, so it may balance out in the end for players in the right mindset.

What isn’t as easy to let by are some unfortunate, if minor, technical and design blemishes on Chroma Squad‘s pristine pixelation. Mission scripts would occasionally freeze in “cutscene” mode, forcing me to start the mission over. A nasty little bug accidentally equipped low-level equipment on my giant robot, making some late-game boss battles much more tense than I’d have liked them to be. One bug even gave me control of an enemy unit rather than my own squad members for a few turns! Thankfully, dev posts on the forums appear to indicate that Behold is aware of most of the bugs I encountered, and a patch is in the works at the time of this writing.

Beyond that, the lack of a mid-mission checkpoint or save, or a mission-select option is inconvenient for players wanting to explore the game’s branching story paths (especially for those curious to see what Behold has to say about Kamen Rider). That said, the team has stated a New Game+ option may yet be in the cards for a future update, so repeated playthroughs may become more appealing in the future. 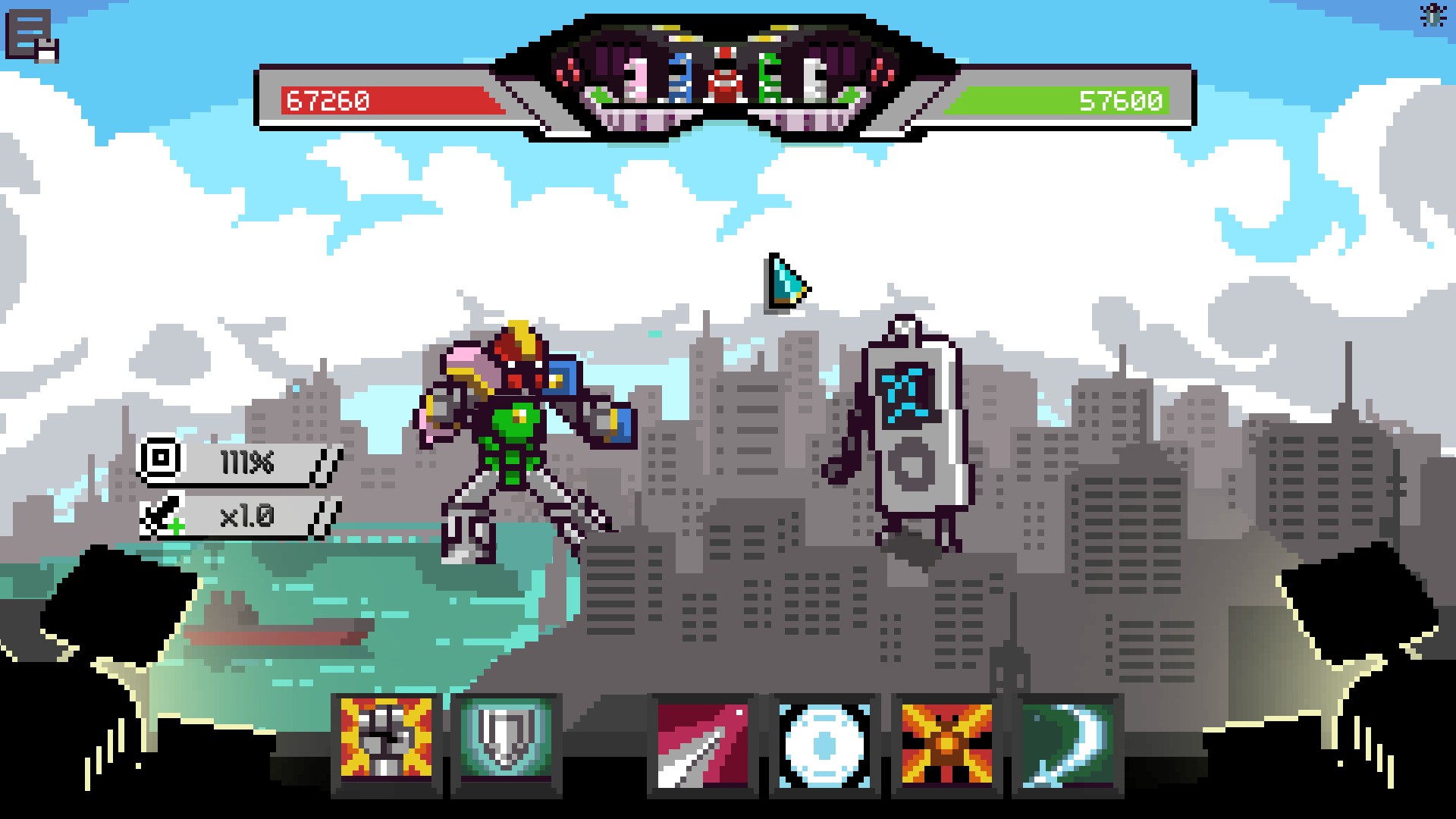 Zordon may have wanted “teens with attitude,” but Chroma Squad and its unabashed, utterly geeky love-in for all things tokusatsu shows something even harder to find: A game with heart and soul. That heart shines through the rough edges, and in some ways even turns them to its advantage. It might have taken quite a while in getting here, but fans of spandex-clad superheroic finally have the videogame to help them fill that little fantasy.