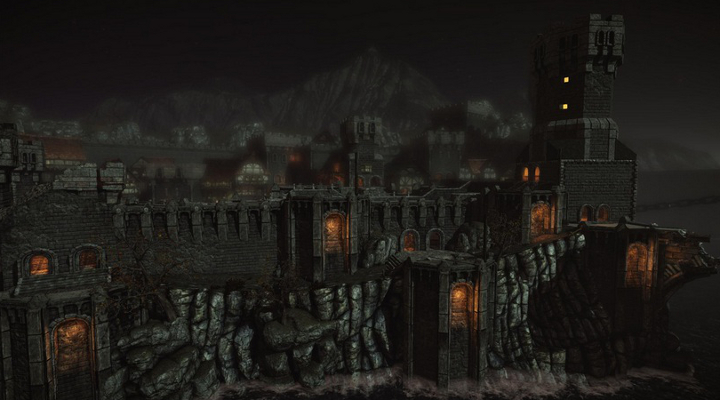 I was surrounded by the dreadful din of battle. Men roared as they charged at their foes, called out for help when they became surrounded, and shrieked as they burned alive. This was my faction’s last ditch attempt to secure victory. Succeed or fail, this would be our final push.

Arrows shot past me, yet somehow, none found me. A fellow soldier standing next to me wasn’t so lucky, and I saw him grasping his throat and gurgling, inhumanly, before crumpling to the ground. Knights challenged me, but I ignored them all as I ran to my objective; a broken door and a lone enemy. The guard yelled at me and brought down his sword, which I deflected with my shield. Both of us staggered backwards. I raised my own weapon, he blocked, I feinted, and then I ran past him like a desperate mad man.

Past the broken door was a cowering man, whimpering in a poorly lit corner of a dirty room. I switched to my axe and cut him down, slicing into his shoulder and cutting off his entire arm. A second later, my head tumbled from my shoulders and landed on top of my victim — I had forgotten about the guard. I was dead, but I’d managed to murder the last of the Royal Family and win the round. There’s a serious lack of actual chivalry in Chivarly: Medieval Warfare, and a lot more decapitations, murder, and screaming. It’s all the better for it. 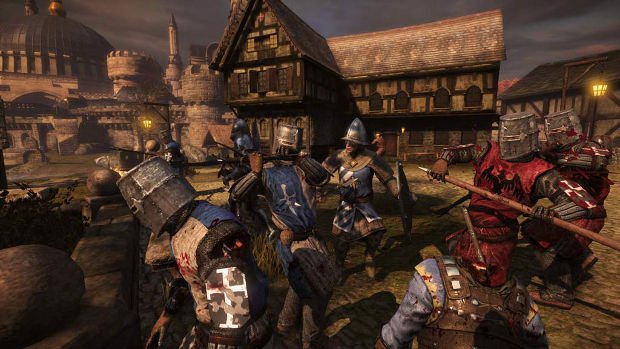 A battle in Chivalry is made up of countless memorable clashes and moments of the sort one could imagine being recited by grizzled veterans around a camp fire. In one battle, I witnessed a lone maniac guarding a bridge from a whole squad of foes, knocking them down onto the rocks and icy cold water below. He took out three men that way, killing a fourth with his mace. I didn’t relish challenging him, but I had no choice, so I charged and let out a roar. Just before I reached him, he jerked forward, and then collapsed. A hidden archer had finally ended his reign of terror.

While there’s no real plot, and no single-player campaign, the chaotic flow of each battle creates a narrative filled with tense duels, dramatic sieges, the destruction of villages, and the murder of innocents. The objective-based maps have this in spades, especially, but not exclusively.

There are five game modes in total: Free-For-All, Team Deathmatch, King of the Hill, Last Team Standing, and Team Objective. The latter is where I got most of my kicks. Objectives are simple things like killing villagers, besieging or defending castles, or assassinating people. The goal is dependent on your faction, Mason or Agatha, though with four sprawling maps made up out of the smaller maps used in the other modes, both factions get to test their mettle by being defenders or attackers. 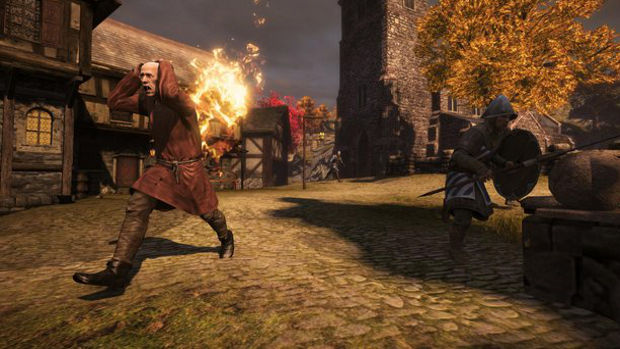 The maps are filled with open fields for huge pitched battles and catapult bombardments; sturdy castles for ponderous sieges and classic duels on battlements reminiscent of a plethora of scraps from literature and cinema; narrow valleys perfect for ambushes; and even burning villages complete with screaming villagers. Fatal obstacles like spike pits, perilous drops from bridges, and fire all add another element of risk to a chosen battlefield. Selecting where you attack is just as important as the method you utilize to dispatch your foes. The maps are all designed with the brutal spectacle of combat in mind, like theme-park versions of medieval encounters.

I found the most striking one to be Hillside, where one team is attempting to aid a massive invasion fleet — seen off in the distance — by lighting signal fires and destroying trebuchets, while the other team attempts to stop them and halt the invasion. The objectives are simple, but the setting makes for an incredibly dramatic battle. Fires light up the crumbling cliff fortress while men shriek as they get trapped in the castle’s many narrow corridors and are unable to swing their weapons, eventually finding a dagger stuck in their chest. Massive trebuchets punctuate the screams with thuds and the sound of rocks cutting through the air; below is the ever present fleet, imposing and vast.

It’s all rather flashy and cinematic, and is more 300 than The Hundred Years’ War. Yet, amid the slightly jerky animations, the lunatics running around like drunk berserkers, and the cheesy oaths and curses that players can have their warrior utter, the game can still be quite serious. Combat and weapon variety tie everything together with a grim, skill-based, blood-splattered bow. 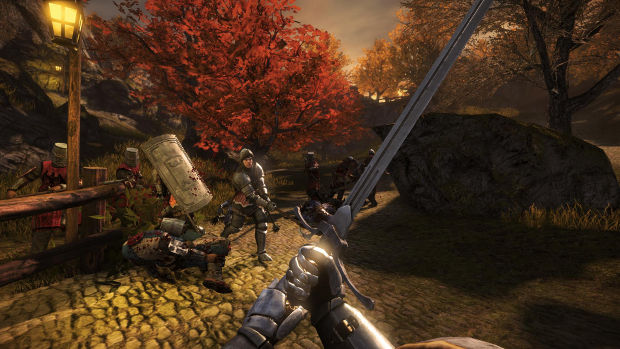 Players have a choice of four classes, all with different weapon loadouts, armor, and skills. The Knight is a lumbering steel-clad menace, slow, but very powerful. He can wield both a gigantic shield, and weighty who handed weapons, perfect for crushing his opponents. The Vanguard is a master of damage; faster than the Knight, though hardly nimble, he can rush his enemies with his deadly polearm, using his momentum to unleash a devastating strike. Far quicker than his melee chums, the Man-at-Arms is able to dodge attacks, and get in close for some fast strikes. Finally there’s the sneaky archer, the least chivalrous of the lot. He’s fast and has the greatest range, but is often at a disadvantage against heavily armored behemoths.

Each class has different builds based on their loadouts, however, so my descriptions of them are hardly definitive. Knights can wade into battle with sword and shield, while archers can use large body length shields to create temporary barricades, making them rather heavily armored. Players can choose three pieces of equipment: two weapons and an extra item like a shield, explosives, or a throwing weapon. Getting kills with the initial weapons unlocks another one in its category, encouraging both focus and experimentation. These unlocked weapons are not necessarily better than the early ones, so, ultimately, new players are not hampered by crap equipment, and more experienced players still have to use skill instead of relying on higher-tier gear. 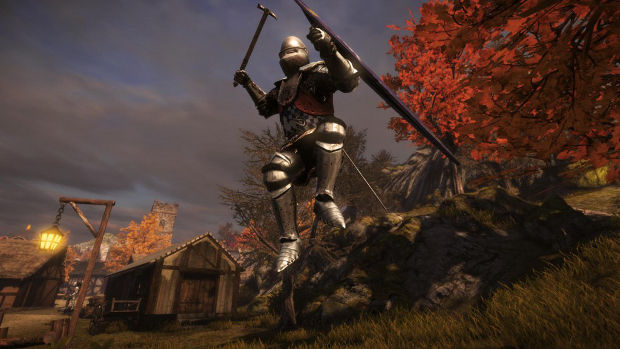 For all the interesting maps and bounty of weapons, it is the precise hit detection that is most impressive. Attacks are mapped to the left and middle mouse buttons. Left click unleashes a swing, scroll up and you jab or stab, scroll down and you bring down a powerful overhead smash. Fancy footwork and a good aim are paramount if you actually want your stylish attacks to do any damage, though, and is one of the reasons for the first-person perspective. Players need to keep their opponents off-balance with feints and pushes, while trying to find a gap in their armor. Without the element of surprise, a fight can go on for some time, with players backing away, taking up defensive postures, and trying to goad their enemy into attacking and perhaps revealing a weakness.

Blocking is equally involved. Shields obviously offer the best protection, but defenders still need to take into account the type of attack so they can defend appropriately. Covering your body won’t do much good if you’re about to get your head caved in. Defending with weapons is a lot trickier, as you need to actually aim your block at the tip of your enemies weapon; so mistiming blocks is always something one worries about.

Despite the ever present cries of “OP!”, weapons seem well-balanced, and combat is definitely a skill-based affair. The slower, more powerful weapons are certainly deadly tools of destruction, but an Archer or Man-at-Arms can still dance around the swings. Every weapon requires practice and familiarity to really exploit its strength, and they all have logical weaknesses — nothing feels particularly overpowered. 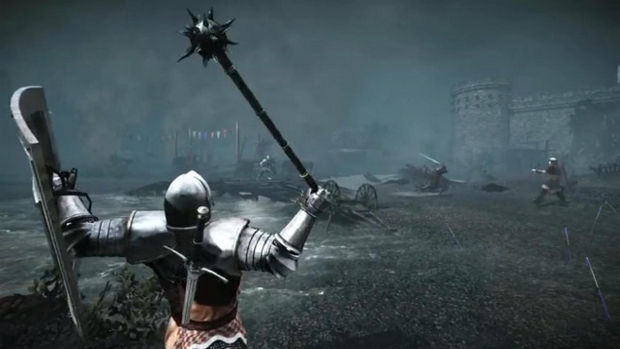 Every hit, parry and block feels real. The sound, the knockback, the weight of the weapon — it all goes towards making duels seem like a struggle. Combined with the shouting and cursing of enemies and comrades, the press of bodies in crowds of combatants, and the cries of the dying, the game is elevated beyond its initial arcade-like free-for-all feel. It starts to become a simulation of battle, rather than a mere fun slaughter-fest. Add in lots of inexperienced players, however, and it comes crashing down back to earth.

It is rather easy to just go mad and swing your weapon wildly like some alcohol-fueled Woad Raider. You’ll die quickly, but there’s a good chance you’ll take a few enemies with you first. Stamina is not a particularly punishing mechanic, which certainly enhances the fun, but it also creates situations where tactics just get thrown out of the window. Two skilled warriors perform graceful dances, but if someone is trying to dance when another person thinks they are in a mosh-pit, they aren’t particularly compatible.

That said, experienced players will know how to deal with such situations, so it’s certainly not a case of the game being too easy. That’s demonstrably not the case. If anything, it’s extremely challenging. But in the chaos, people can get carried away. The arena-style map is a perfect example of this. Loads of angry men, testosterone bubbling, stuck in an small space, tearing away at each other with no regard to their surroundings — it all looks a bit silly. Importantly, though, it’s still a lot of fun. 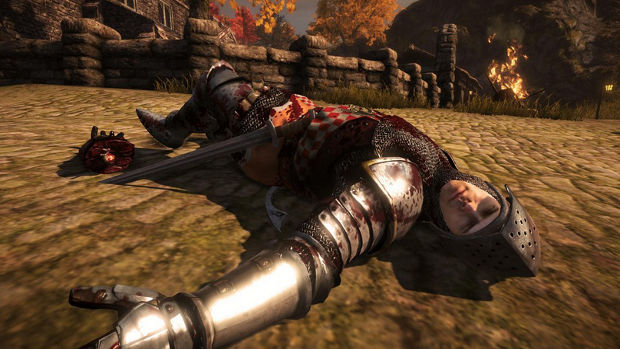 The unfortunately small number of maps, and the disparity between the skill-based swordplay and wanton hacking and slashing can cause a certain degree of frustration. The absence of armor options also seems remiss, especially when compared to the robust selection of weaponry. The animations and interactions with siege weapons are absolutely dismal and unpolished, and while they were forgivable during the beta, they are far more noticeable now. Yet when one’s blood is up, and you’re charging into the fray, it’s an exciting experience that I feel cannot be matched by its gun-totting peers.

Comparisons between Chivalry and War of the Roses are inevitable. Both medieval melee-focused multiplayer titles; both coming out in the same month. The similarities are superficial, though. The difference in perspective, pace, and customization means that they can both be enjoyed for different reasons in the same way that people seem to be capable of enjoying both Battlefield and Call of Duty. When it comes down to the grisly joy of killing, however, Chivalry does edge ahead.