Tetsuya Mizuguchi’s Rez is a cult classic, but was never a hit with a mass audience or at retail. That a follow-up was even greenlit by publisher Ubisoft, nearly ten years after the release of the original, is something of a mystery.

Well, fans wanted it, and now they have it with Child of Eden. A sequel to Rez in everything but name, Child of Eden is a short-but-sweet journey through five awe-inspiring worlds, and one of the best Kinect-enabled experiences to date. 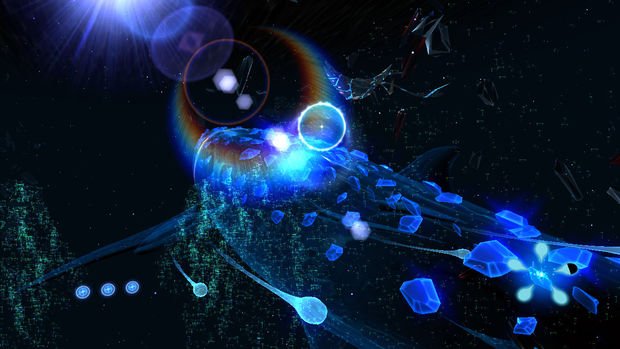 If there was ever a game that didn’t really need a story, it’s Child of Eden, but Q Entertainment has managed to include one nonetheless. You’re tasked with purifying various Archives of corrupt information that threaten to destroy Project Lumi, which is being designed to create an archive of human memories. Fans of Q Entertainment’s previous work and the music of the Mizuguchi-produced Genki Rockets will recognize the female face (and voice) of Lumi as Nami Miyahara. Cleansing the archives and saving Lumi (the “princess” in Child of Eden‘s “castle,” so to speak) directly leads players into the events of Rez, which takes place inside that the Project Lumi artificial intelligence. So that’s happening, right?

Child of Eden isn’t only linked to Rez in the narrative sense, it’s basically Rez through and through. From a gameplay perspective, things have remained largely unchanged. Players “paint” up to eight targets, unleashing a burst that destroys them all in a single blast. A second weapon comes into play for Child of Eden, a rapid-fire attack that can be used to more easily dispatch purple-colored targets. This second means of attack may be Child of Eden‘s only real gameplay innovation over the ten-year-old Rez, but it’s one that I found made for a tighter gameplay experience.

While I always found threats in Rez to be bit on the ambiguous side, Child of Eden highlights them quite nicely. Simply put, if you see purple stuff flying at you, you’ll have to shoot it down with your secondary fire. While this arguably makes the game easier than Rez, it also serves to make it more enjoyable by making sense of sights and sounds that otherwise might over-galvanize your grey matter.

Completing Child of Eden‘s five archives isn’t a particularly difficult task, but doing it well can be both tricky and wholly satisfying. The skill is in locking on to eight targets and then releasing your blasts on the beat, which is easier in theory than in practice. Doing so in rapid succession holds your combo, helping you rack up higher scores based on your performance.

Sure, it’s possible to simply blast your way through each of the game’s stages, but the beat-based gameplay hook requires some finesse for high scores, and can be extremely satisfying.

While Child of Eden‘s gameplay is solid, it naturally shines when its matched with its music and visuals. In this regard, Child of Eden manages to trump the efforts of Rez on all accounts. While the vector stylings of its forerunner are still outstanding to this day, the colors and variation of Child of Eden’s Archives are simply breathtaking. Each has its own theme, the worlds and sights as imaginative and awe-inspiring as the next.

If the core point-and-shoot on-rails gameplay gets stale on its own, there’s no way of knowing for certain. The game’s audio and visuals are in many ways directly tied to your actions, with hi hats, crashes, and crescendos you’ll trigger based on your performance. And while the trance-like, electronic pop sounds of Genki Rockets may not be up everyone’s alley taken alone, it’s difficult not to appreciate the ways in which the music is impeccably woven into the experience. 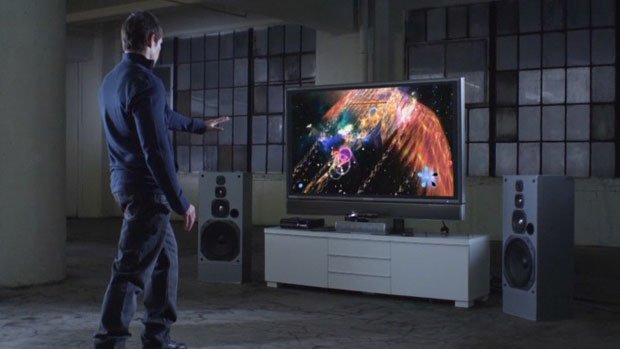 Played with a standard controller, Child of Eden doesn’t feel all that different from Rez save for the minor gameplay tweaks I mentioned earlier. Considering how polished and enjoyable that experience is, that’s not a bad thing at all. Using the game’s other control option — the controller-free Kinec sensor — delivers an entirely different experience, however.

It’s important to note that I’m using the word “different,” despite the declaration on the box (as with many Kinect-supported games) that Child of Eden is “Better with Kinect Sensor.” It’s not better or worse, it’s simply different. You’ll use your right hand to move a reticle on the screen, painting targets; to unleashed a blast, you’ll simply push your hand forward. To use your rapid fire, you just raise your left hand and move the reticle to fire in that direction.

While I went in skeptical, Q Entertainment has found a control scheme that works surprisingly well with Kinect. There’s still some lag in the movements, with the guide reticle seemingly floating about as you move, versus the smoother motion of the analog sticks. Even still, it was quicker to directly target enemies with my hands once I was oriented, as opposed to having to move a reticle with the analog sticks across the length or height of the screen.

What makes the controller-less Child of Eden experience such a dream, however, isn’t something I can easily pin down like faster targeting or more accurate control. By simply freeing the player’s hands, the experience with Child of Eden‘s worlds changes quite drastically. Standing in front of the screen and merely using my body to target enemies, it was only a few minutes into the first Archive that the real world around me (i.e., my living room) simply drifted away. 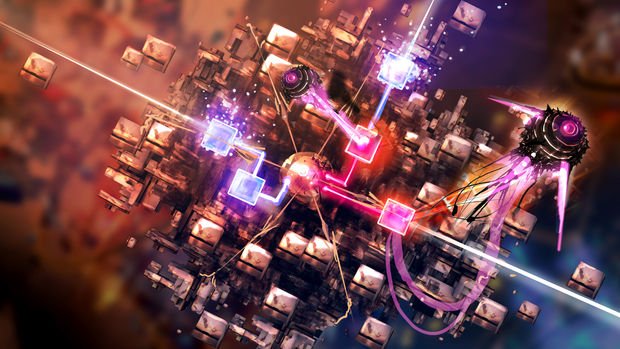 I’m completely accustomed to pointing and shooting with a controller in my hand, be it a dual analog controller or a pointer like the Wii Remote, a mouse, or PlayStation Move. But Child of Eden‘s Kinect controls are the first time I completely understood how a controller-less gaming could break down the wall between the game and the player.

I wasn’t simply manipulating things on the screen with sticks and a pad, like a god pulling the strings on a marionette — I was part of the experience, completely and fully. If that sounds like some kind of intangible hippie, spiritual mumbo jumbo to you, I won’t argue. But it’s utterly undeniable once you’ve experienced it for yourself.

Despite that level of connection and immersion with the world, it’s difficult to say that one control method is better than the other. The game keeps track of your scores across two separate leaderboards dedicated to each of the schemes and for good reason — you can’t really, and shouldn’t, compare the two. If you’re keeping score of the benefits and drawbacks of the two systems, it ends up a wash, and maybe even a matter of preference at the end of the day.

While I liked ditching the controller for a more direct experience with the game, I ran into some frustrations when the Kinect sensor picked up on me “pushing forward” and would accidentally trigger my attack, breaking a combo. Ultimately, I played through the Archives a number of times using both control schemes, though; it was almost like playing a completely different game in many ways.

Child of Eden‘s biggest shortcoming is that it’s over before it really begins. There are only five main archives, each of which can be completed in roughly ten to fifteen minutes a shot. Do the math on that and you’re looking at what some may consider a game that’s far too short for a $50 retail experience. Depending on where you stand on the “length as value” debate, that may seem criminally brief.

Certainly, Child of Eden features an abundance of unlockables, including Genki Rocket music video clips, game art, and other extras. And if you factor in playing it with both Kinect and a standard controller, along with focusing on leaderboards and scores, there’s more replayability than what’s apparent on its surface. That said, score-based competition isn’t for everyone and only completists will care to take the time to uncover all of the game’s treasures.

With Kinect, Child of Eden may be one of the most unique, beautiful, and hypnotic shooter experiences the medium has ever seen. With a controller in hand, it isn’t much more than an evolution of its predecessor, which will probably be enough for admirers of the cult classic. That its core campaign is so short may rightfully give some gamers some pause, but the value of the Child of Eden journey itself is unquestionable.

Filed under... #Child of Eden#Kinect#Ubisoft