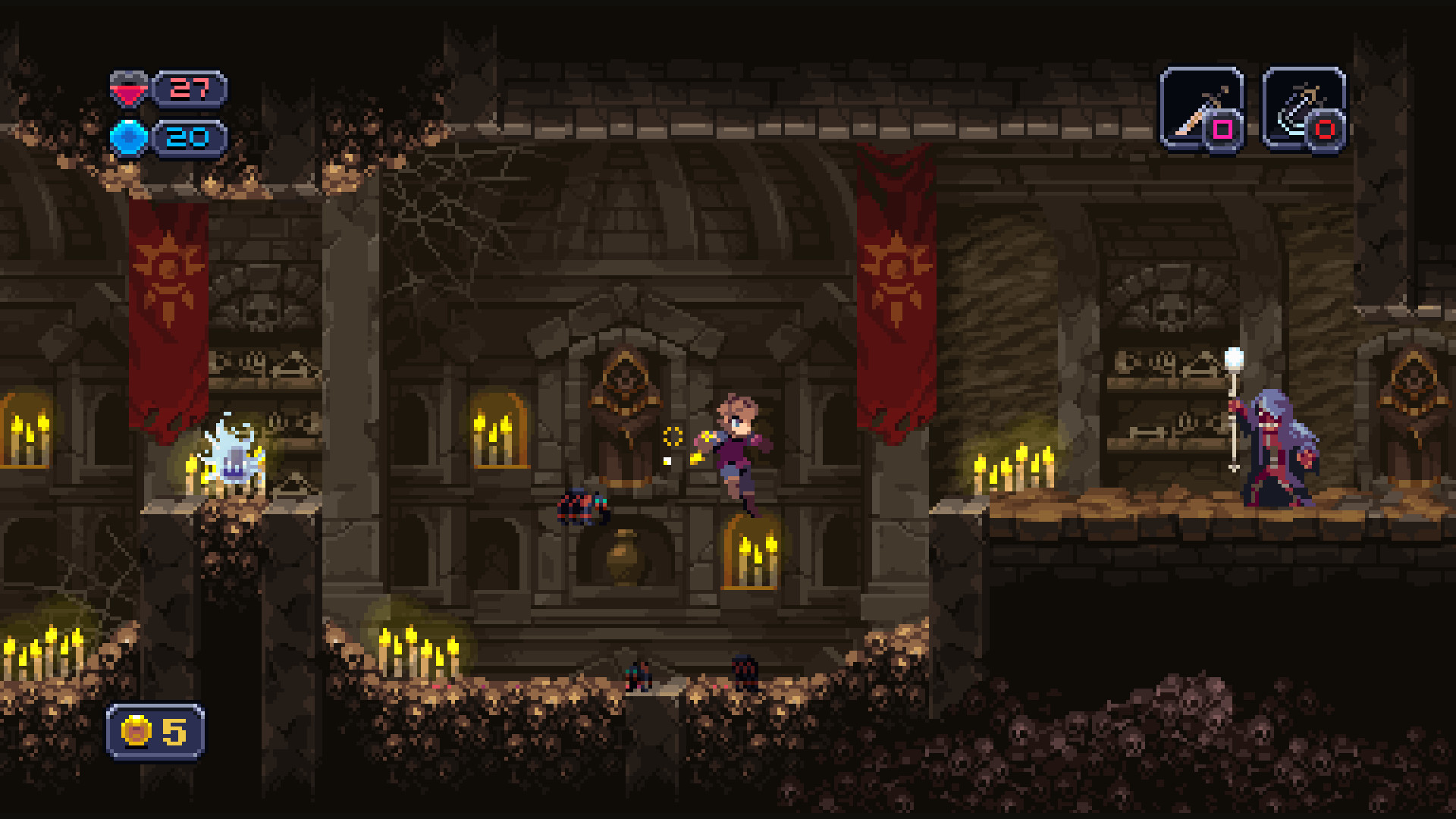 Let your light shine down

It feels like we’ve been waiting forever for Chasm, and that’s because we have. Riding the second post-Banner Saga wave of Kickstarter, the project launched in mid-2013 and was fully funded in less than a month.

Since then studio Bit Kid has enjoyed a relatively blow-back-free development cycle, taking its time to release Chasm when it was ready. Over five years later, here we are.

In case you’ve been sleeping in a cave for the past five years: Chasm bills itself as a metroidvania with procedural elements, and it delivers on that promise. As a new knightly recruit your goal is to investigate a troublesome mine in the Guildean Kingdom, which as it turns out…is evil (dun dun dun)! In all seriousness there’s plenty of lore to dive into, mysteries to unravel, and people to meet, mostly told by way of optional journals (also known as data logs in modern vernacular). It all flows rather quickly as the spirit of Chasm is exploration and coming to terms with genre familiarity, not breaking new ground.

Its Symphony of the Night influences are as plain as day — perhaps more so than the competition. There’s a back-dash button from the start, it has knife and axe subweapons (among other homages), combat flow feels relatively similar to how Alucard operates, attacks can crit, you level up on the spot in a dungeon, damage numbers are scrawled across the screen, there’s some religious iconography, it sports a save system that also fully heals the player, and there’s a full equipment menu with loot.

None of these facsimiles are complaints, as Chasm doesn’t feel like a carbon copy in the slightest. The development team slipped in a few unique spins including light puzzle solving and plenty of original animation that seems like it took up the bulk of their lengthy development time. When the hero swings a sword he has an elaborate follow-through motion where he leans back — details like that help Chasm pop in screenshots and in practice.

It also doesn’t have any real bloat. Maps are segmented into themed realms (gardens, catacombs, and the like), and if you want to fully comb each of them they’re bite-sized enough where it doesn’t feel like a chore. Once you start getting into the fourth or fifth area though this is the type of game you will want to take notes (or screenshots) for. As in, a critical path item might be unlocked by visiting an innocuously placed hovel (that’s indiscernible on the map) in an early area with a new ability.

It can get really frustrating at times, especially after you’ve already ran through the mines (the first zone) four or five times to spot something required to press on. Because of all this meandering backtracking the RPG progression system works against Chasm, as you’re just going through the motions with your badass weapons and armor, smoking all of the early enemies in your wake. Even with permadeath on you’re not likely to break a sweat returning to previous locales.

Another small issue I have is the bland nature of a handful of enemy types. Midway through Chasm the chaos ramps up a bit and you start getting foes with several different abilities or attack animations, but a few early baddies are far too static for their own good — it’s not just that they move mindlessly back and forth, they don’t have any personality. The same principle extends to several minibosses, a few of which are basically just big versions of existing enemies.

Some of this frustration can be blamed on the procedural system that can implement vastly different arrays of enemy combinations; which isn’t an excuse as the mechanic works in its favor more than to its detriment. After finishing my first run in eight hours I immediately sprang for a new run, and here’s the thing — it’s different enough. What I really dig about Chasm is that I don’t have to take the time to explain any provisos or anxiously wait for someone to dismiss it because of phrases that don’t apply here such as “roguelike” or “hardcore.” Each run is generated anew as you play them, garnering usage of the typically scary phrase “procedural,” but that particular run is more grounded because of the way Chasm‘s level design adheres to the tried-and-true pillars of the genre.

It gives you what you want without straying too far from the path: a path that’s not inherently bad, just occasionally more convoluted. If you want, Chasm can be a roguelike with its “mortal” option (that’s off by default), or you can share the exact same world with a friend from day one with the same numeric seed value. It succeeds in providing a slightly different feel for everyone to the point where a generic walkthrough couldn’t work as a catch-all guide (unless everyone uses the same seed), but explaining general concepts will.

Chasm was worth the wait regardless of its shortcomings. It’s gorgeous, it sounds wondrous, and even though I’m not quite at the point where I can call it a “classic,” it honors the genre. I hope the follow-up doesn’t take nearly as long.