Late last month, I reviewed Tokyo Dark, an independent supernatural investigation point-and-click. People sacrificed themselves for religious cults, I had a great time. In early October, I spent most of my free time playing and speculating about the fantastic Danganronpa V3, where talented teenagers kill each other to escape the prison they’re stuck in. And now, as October is coming to an end, here I am reviewing Chaos;Child, a science-fiction murder mystery visual novel. 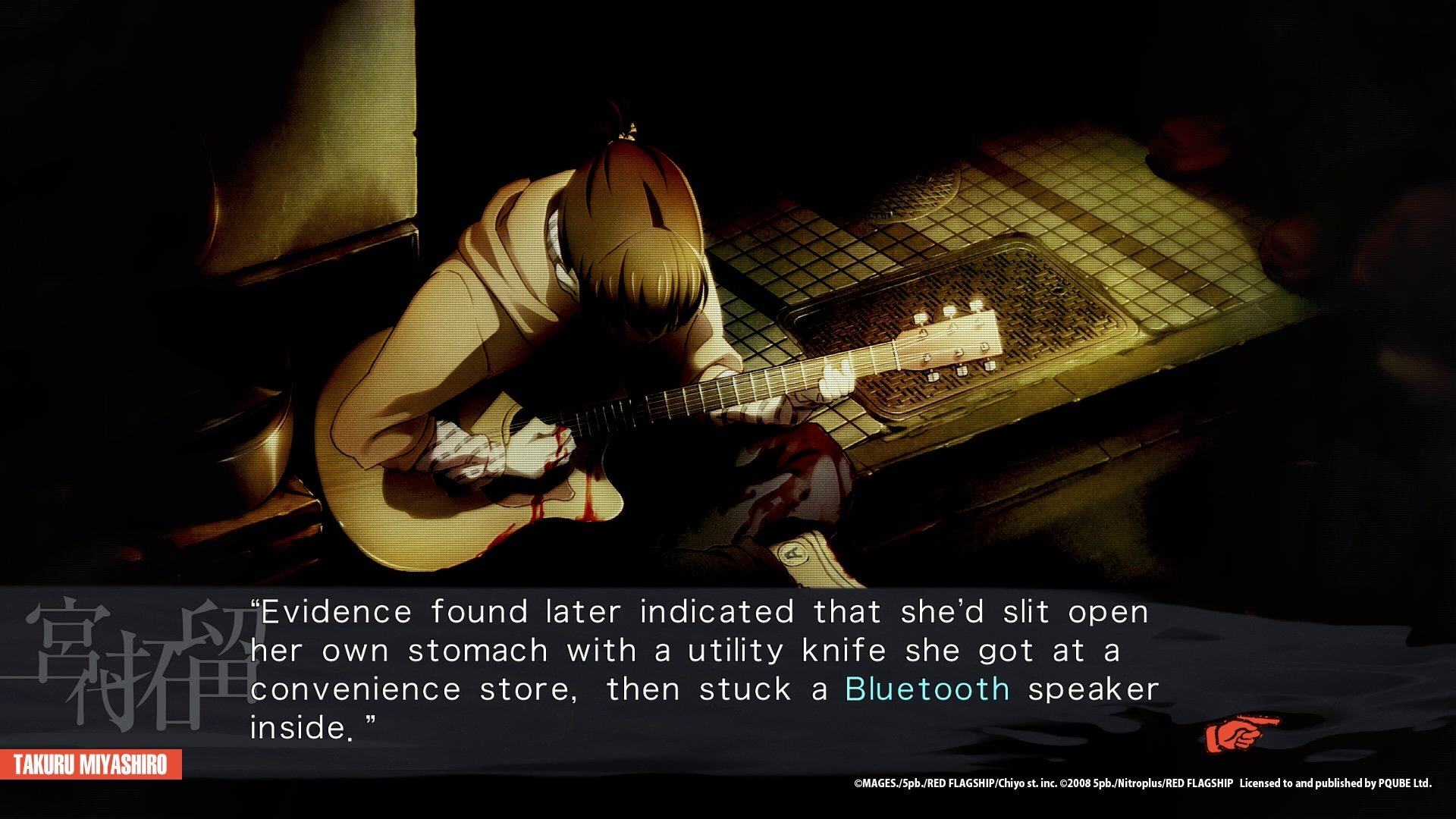 Sorry, spaced out a little there. Chaos;Child is kind-of, sort-of in the same world as the ever so popular Steins;Gate. The year is 2015, and a series of grotesque murders happens in Shibuya. You play as Miyashiro Takuru, an anti-social Japanese teenager. As a member of your high school newspaper club, it’s obviously up to you to solve the case. You don’t get a scoop like that any day, after all, and the wrong-siding masses would never find leads like you can. 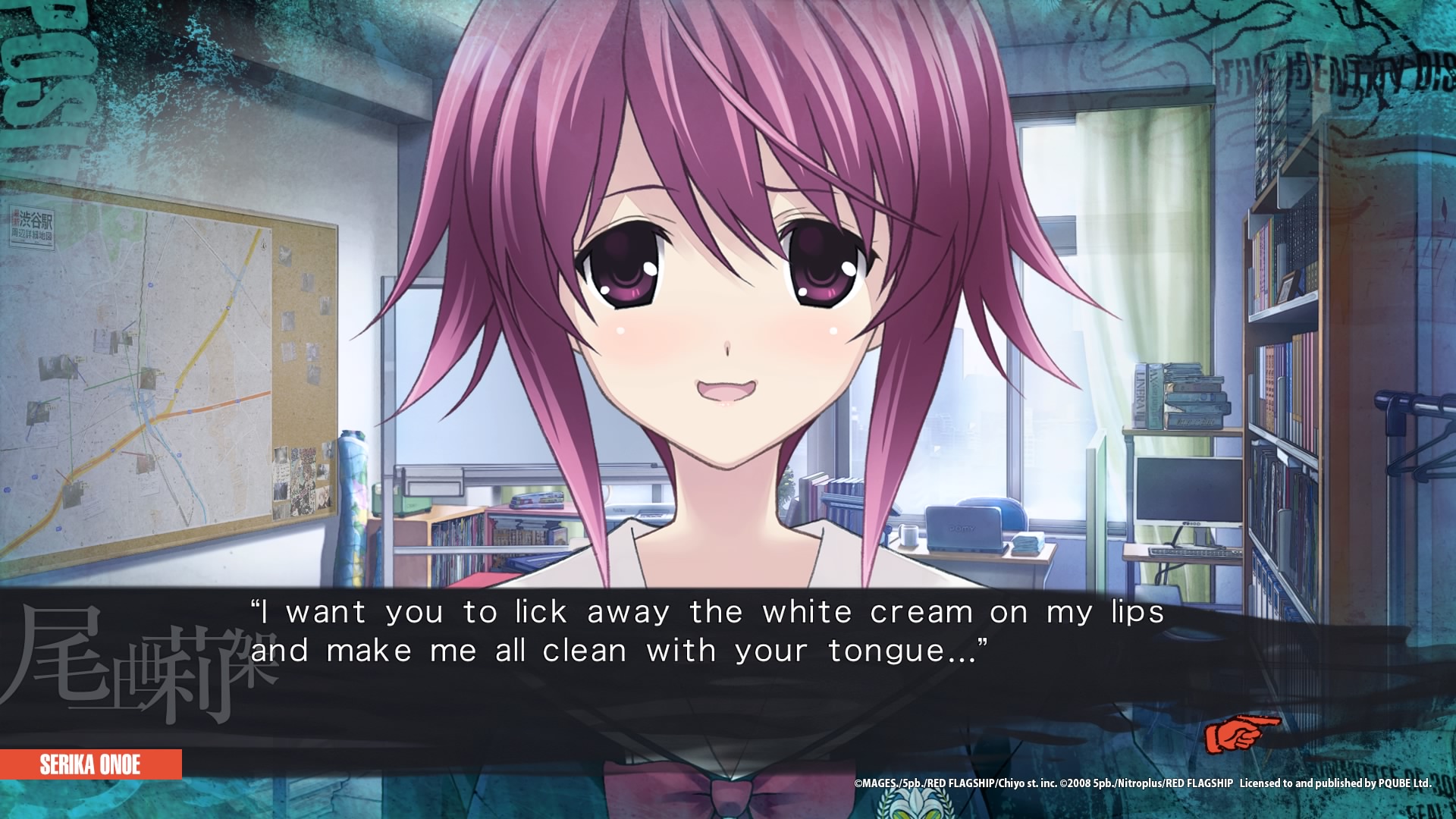 The main gimmick of Chaos;Child, and its predecessor Chaos;Head, is the main character’s delusions. During conversations, you can decide to imagine a more pleasant outcome, or a more negative series of events. Of course, you can also stick to reality. While this was fun to mess around at first, I couldn’t help but feel like this mattered very little in the whole scheme of things. After all, you will always get the neutral ending first no matter the delusions you choose. If you’re looking for a quick wank, you might enjoy the events that happen in positive delusions (be careful around family!), but I couldn’t see the appeal of negative delusions. Creeping me out works a lot better when it’s not something I deliberately choose the timing of. I ended up sticking to reality a lot.

Chaos;Child references Chaos;Head a lot. That’s natural for a sequel, but the problem here is that the latter was never officially localized. While a lot of the references land through explanations from the characters, not all of them do. As a whole, it felt like the reader was expected to know about the circumstances surrounding the New Generation Madness murders of Chaos;Head, and the visual novel was trying to play with the resulting expectations. I feel like there would have been a lot to gain by releasing an official translation of Chaos;Head first. I ended up filling in the blanks with bits and pieces of Chaos;Head‘s fan-translation and its animated adaptation, which is hardly ideal. 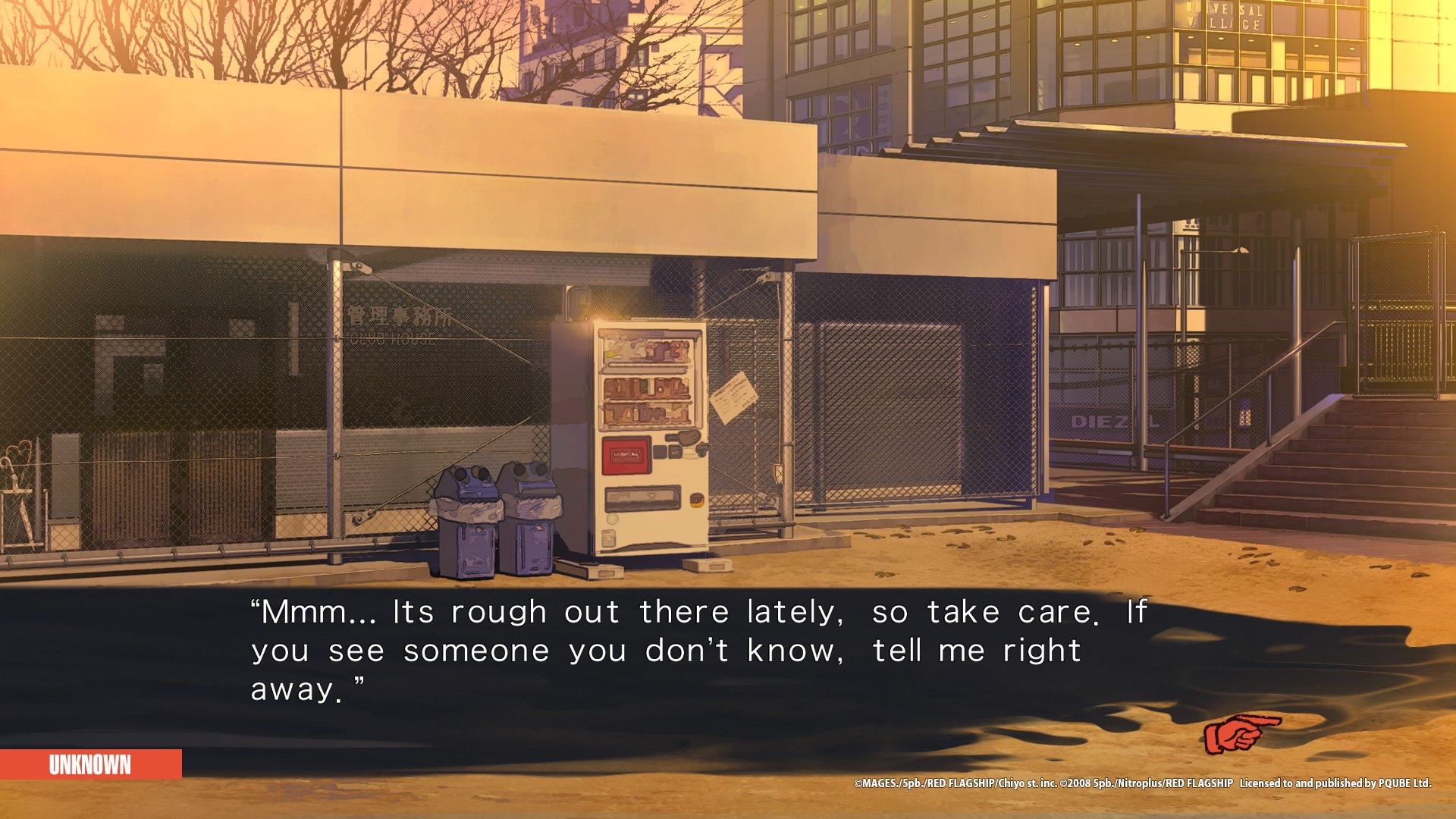 Let’s talk localization. That’s everyone’s favorite part, right? The best way I’d describe it is a strong foundation that lacks polish. Characters talk in a hip, young lingo that doesn’t feel too stereotypical. It’s in general quite pleasant to read… A very modern visual novel with references to internet culture aplenty. The TIPS system, which offers a dictionary for uncommon or fictional words used, can also greatly help if you’re ever confused. The issues I have with the localization are mostly technical. Chaos;Child has a number of typos and odd spacing issues that hurt the experience. Words sometimes went beyond the text box, and the text bubbles appearing in the virtual lobby were all around completely messed up. It’s a rough overall package.

Visually, on the other hand, Chaos;Child is a very clean. Character portraits are nicely improved over Chaos;Head in detail and quality. CG is as a whole more consistent than Steins;Gate‘s art under Huke…  But in most scenes, you’re going to spend a lot of time looking at backgrounds that aren’t anything special. It’s a visual novel! Imagination is your greatest weapon. 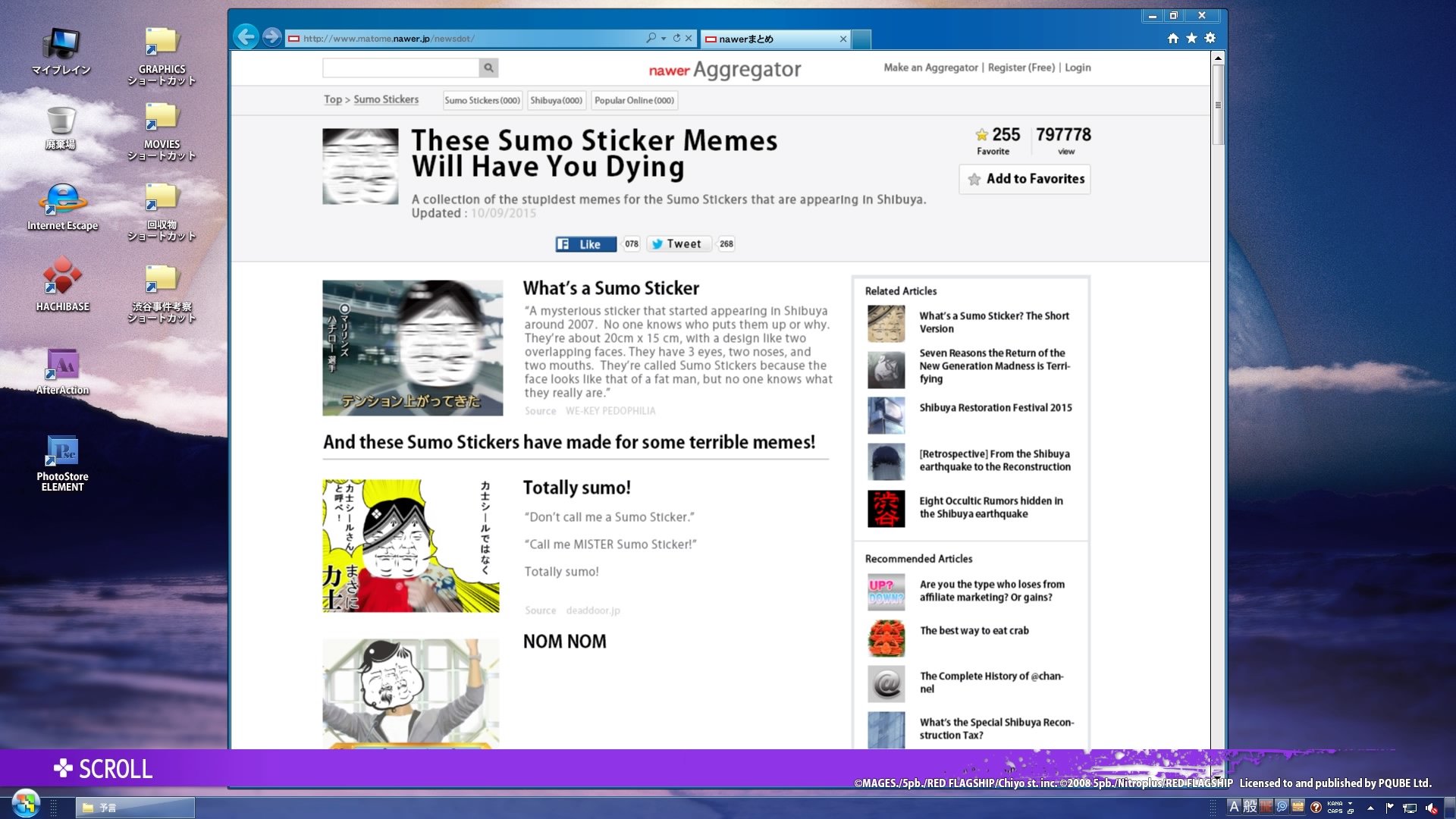 Now, the elephant in the room. Chaos;Child is slow. It is very, very slow. It’s so slow that despite my best efforts to format this review in a way that emulates how slow Chaos;Child felt, I couldn’t even come close to the original material. Most of your time is spent in school talking to other students. In-between murders, you’ll fantasize about swapping bodies with a female character while preparing a school festival. Maybe you’ll visualize yourself accidentally kill your best friend when making her drink eye drops, or you’ll lift skirts with your psychokinesis.

Some of these scenes do help flesh out the characters, and they were never a complete chore to read. But it just felt like there was too much down-time between moments where the plot actually goes forward. It took me significantly more time to finish my first ending in Chaos;Child for this review than to get a platinum trophy in Steins;Gate 0. And yet, reaching the true ending requires you to get every heroine ending beforehand. Chaos;Child is almost comically long, and not all of this length felt deserved. That’s a real shame because the main mystery was quite engaging. 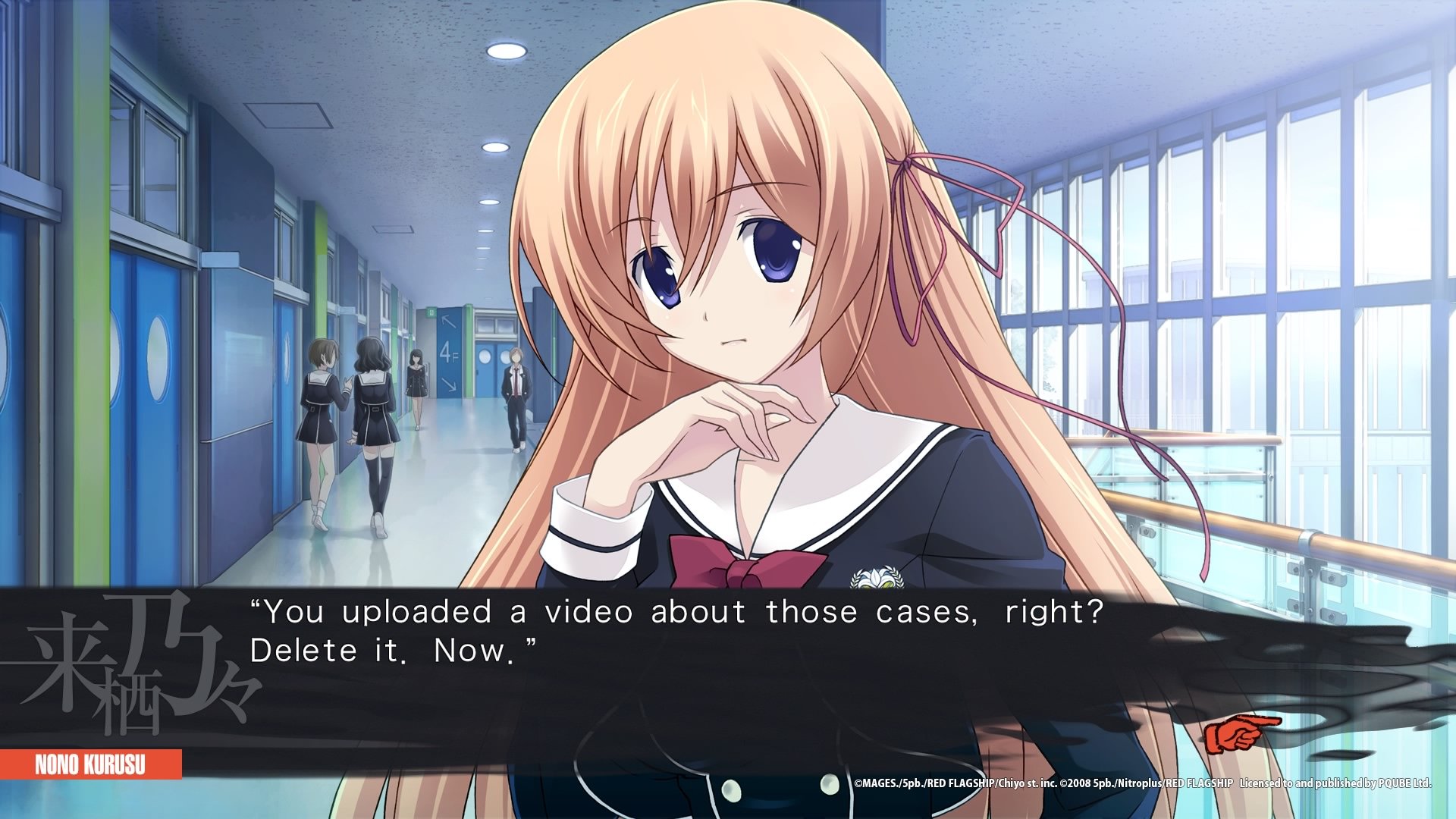 Curious to see if the animated adaptation that condenses all that in a properly digestible 13-episodes-plus-OVA format was a good alternative, I watched that as well. It ended up going too far in the other direction… While the visual novel stretched the filler sequences thin, the anime blazes through the key scenes like it has to catch a bus in five minutes on the other side of town. The most important moments happen too quickly and are too impersonal without the protagonist’s thoughts. If you’re picking between either of them, definitely stick to the visual novel. 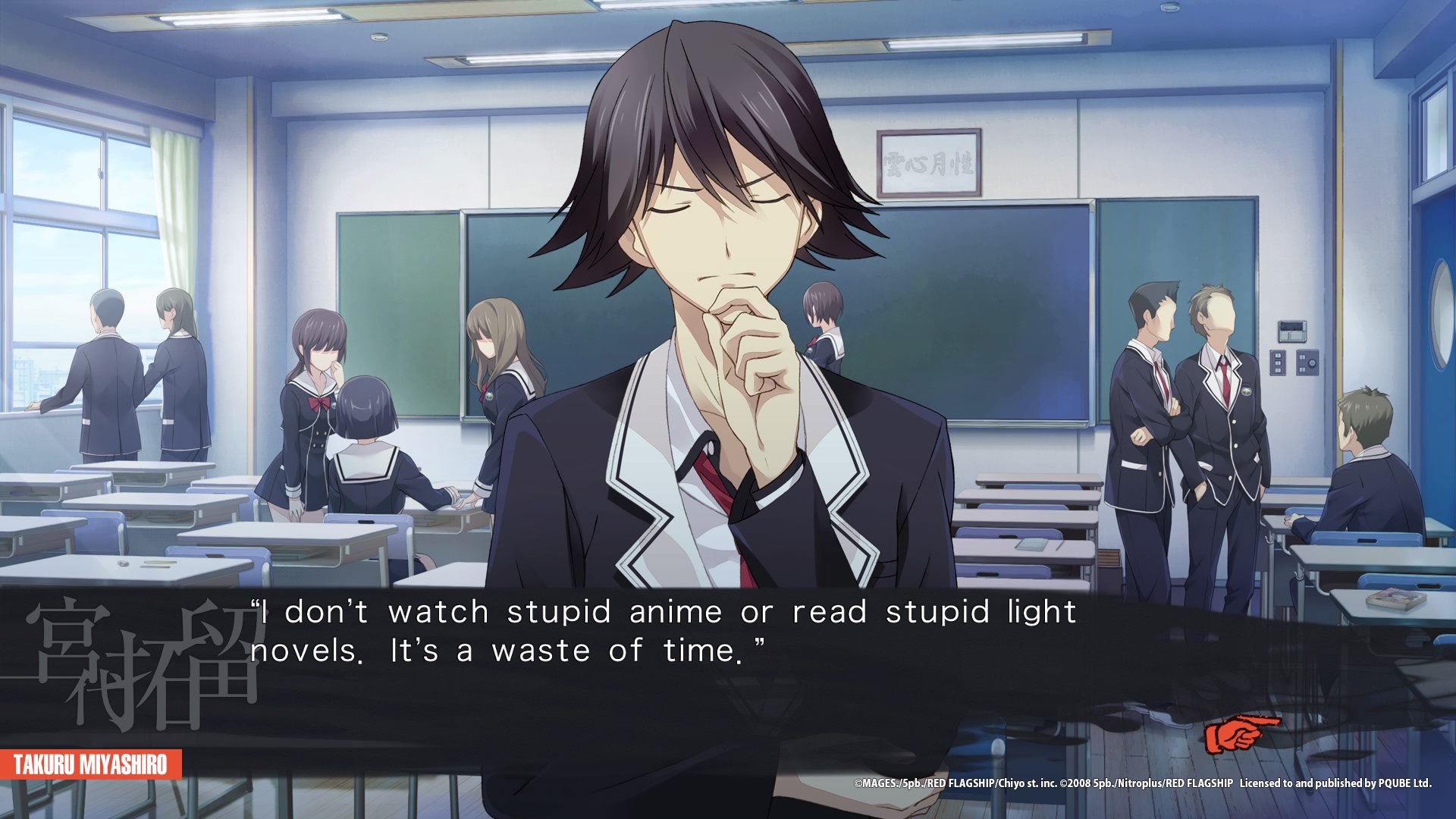 I’ve complained a lot, right? And yet, I do feel like there’s a strong core underneath all the issues I had with Chaos;Child. With fixes to the localization oddities and a more condensed game mode, I believe the fun character interactions and the thrill of the murder cases wrapping themselves around the main character would shine a lot more. It would only require fine-tuning to make this a visual novel I can highly recommend like Steins;Gate and Steins;Gate 0.

As it is currently, however, Chaos;Child did not make me feel under either a positive nor a negative delusion.