A confederacy of dunces

Deponia ended right when things were getting good, and so that’s where Chaos on Deponia begins. Despite the first reaching the West in January — or August, really, for us Steam-lovin’ folks — a full, bona fide sequel is already upon us.

Even though the game features new characters, locations, and many improvements over the original, there are some nagging issues that keep Chaos on Deponia from being what the previous entry hinted the series could become. 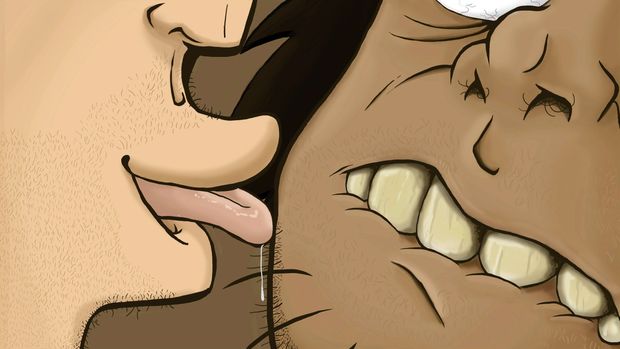 Chaos on Deponia starts with a repeat of the first game’s tutorial. Deponia’s anti-hero, Rufus, immediately complains and points this out, making me feel that Rufus and I are on the same page. It’s a nice beginning but what follows is even better.

The true opening of CoD (the non-shooting-dudes CoD) is one of the most knee-slappingly funny and creative intros I’ve seen in an adventure game. It brilliantly plays upon the tropes of the genre and established fiction of Deponia. Rufus is brought into the home of an elderly couple, who bicker and talk about Rufus’ as the player kills their pet, breaks their plumbing, and burns their house down. If only all of CoD’s puzzles were so humorous and self-contained. 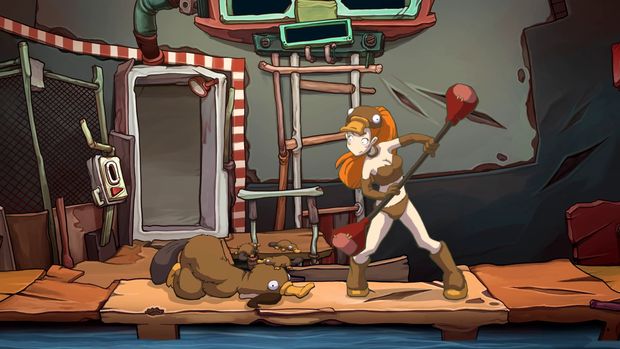 I would actively steer clear of giving spoilers, but CoD would have to have some significant plot reveals and progression first. For a sequel to a game that ended on a cliffhanger, CoD’s plot goes absolutely nowhere. Correction: It goes backward. The plot of CoD mirrors that of the debut: Rufus has once again damaged Goal’s memory implants and must traverse a large city hub to solve puzzles and piece her back together. There is a twist, however. Goal has been split into three personalities: spunky, lady, and child. All of the puzzles in the city progress Rufus in convincing each side of Goal to merge together again. It’s a good concept but I often grew tired of navigating the same dialogue options with all three versions of Goal.

If the opening city hub of Deponia made you fall to your knees, you’re going to faint when you enter CoD’s main city that is double, if not triple, in size. CoD is not for the novice adventurer, since there are always so many locations, people, and items to factor into a puzzle. This is not the game’s problem. Its problem is that it frequently does a poor job in directing the player and subtly dropping hints. Perhaps something is lost in translation from the game’s original German, but I often felt lost and frustrated. Grim Fandango has a similar structure but I always thought it was my fault upon discovering a solution. I either wasn’t paying attention or listening to dialogue close enough. This is rarely the case in CoD and considering the game’s large world, that’s unfortunate. 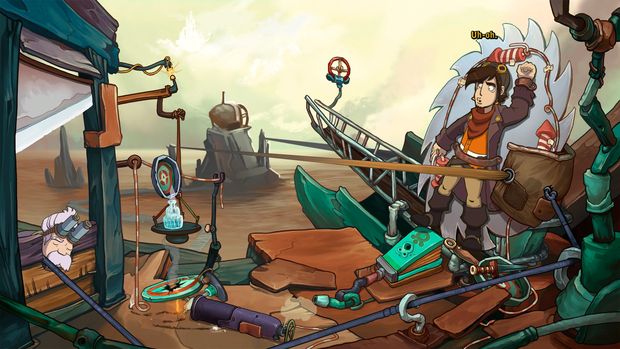 The structure of CoD can be frustrating, but the puzzles themselves are often fun and just challenging enough. As with other Daedalic titles, you can always skip a puzzle. But why would you want to skip battling as a platypus? Not all of the game’s puzzles and minigames are great, but they are interesting and nicely tie into the story. You’ll occasionally come across one that will drive you nuts. I feel almost obligated to give the solution to what is one of the most obtuse puzzle solutions ever put in a game. It gives Psycho Mantis a run for his money, that’s for sure. I’ll just say this: Don’t count out the options screen in your puzzle-solving. I nearly went nuts, so you don’t have to.

Where CoD fails as a sequel, it succeeds with flying colors as a stand-alone, comedic adventure. Curb your expectations and you’ll discover a great cast of characters that are much better written and voiced than anything else Daedalic has put out. From Rufus’ hard-to-please father to the deluded renegade leader, CoD strives on the strengths of its outlandish characters and gorgeous world. As unlikely as it sounds, CoD manages to look even better than the first title. Secret of Monkey Island-style close-up dialogue scenes add some much needed variety and personality to presentation, and the large city hub is fantastic, full of color and detail. The backdrops still lack animation, though. 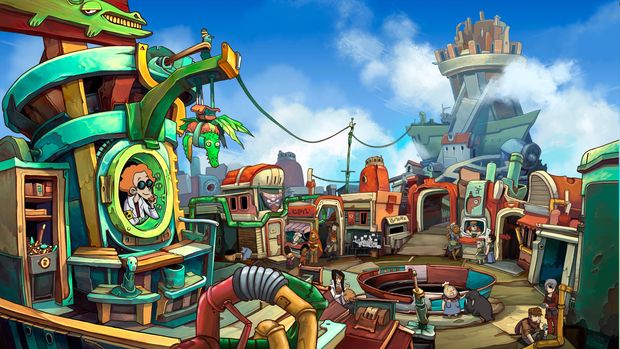 The early press build I played features some typos and glitches but nothing game-breaking. As disappointed as I am that CoD isn’t more progressive in its design or storytelling, it managed to win me over with its characters, dialog, and slapstick comedy. There are few revelations and twists in CoD, to the extent that I’d recommended it to those that haven’t played the first. Although I loved the comedy and characters of this entry, I miss the scale and sense of adventure that the original game contained.

In contrast to the first game, Chaos on Deponia leaves me a little less excited for the next entry, but it also leaves me a little more satisfied with the adventure I just had. If you are up for a serious challenge and some hearty laughs, you won’t be disappointed.