Konami should just keep doing this

So I guess this is where we’re at. Konami is just going to re-release old games and do a decent or better job at it. If that plan continues to involve games like Castlevania Advance Collection, fair enough! 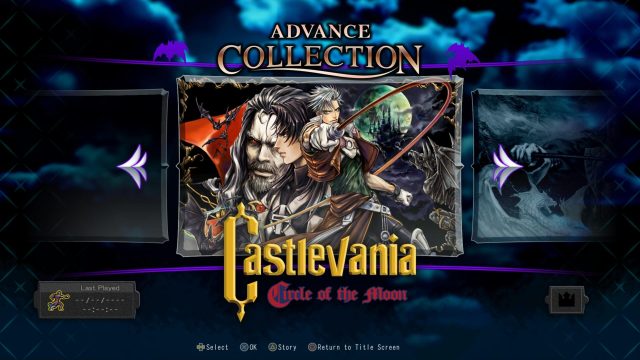 It’s really important to understand why a lot of people are freaking out over the Castlevania Advance Collection: price and convenience.

So all three Game Boy Advance Castlevania entries are kind of legendary in their own right. They’ve racked up a hefty amount of retro cred over the years since they were released (roughly two decades for the lot, more for Dracula X), and are generally worth a good chunk of change even as loose old carts. Aria of Sorrow is the prince of precious — it can still sell for over $100 for legit copies as recently as this past week.

The collection, which also features (the more often re-released) Dracula X, is 20 bucks. And although Konami already has a decent track record with re-releases, it’s shockingly good. This is pretty much an on-point retro release, as all four games are preserved very well, feature responsive controls, and benefit from some extras.

Let’s talk about the games, because let’s face it, not everyone got to play them at launch.

Circle of the Moon is a fascinating Castlevania because you can see the light bulbs go off at nearly every turn. As Nathan Graves (in one of the few departures of playing as a Belmont, just like Aria of Sorrow), you’ll traverse Dracula’s Castle once again in the Metroidvania format that would, at this point, define the series. Released just four years after Symphony of the Night changed the face of the franchise, Symphony DNA is all over Circle of the Moon.

While the early game is fairly basic (kind of like Symphony of the Night with a whip-wielder), it really opens up. Nathan is a great mix between a classic vampire slayer archetype (with subweapons to boot), but he also sports the equipment system from Symphony, as well as some tricks of his own.

As a magic wielder, Nathan can combine cards (earned by defeating enemies), which provide different power-ups and passive abilities. It’s really addicting, because the more you earn the more you can customize your build. While the level design isn’t as flashy as its successor, it’s still very much worth playing based on its own merits.

Next up is Harmony of Dissonance, which steps things up in several regards and gets us back to the Belmont clan with protagonist Juste. The maps are a little snappier and more varied, and Juste can do some really cool things with his whip as you progress, which heightens the combat system. As another magic-sensitive hero, Juste wields special books that are more traditionally located throughout the map, which bestow abilities. There’s plenty of debates as to which is better (Harmony or Circle), but Aria of Sorrow puts a stop to any discussion regarding all three: as it generally wins without incident. 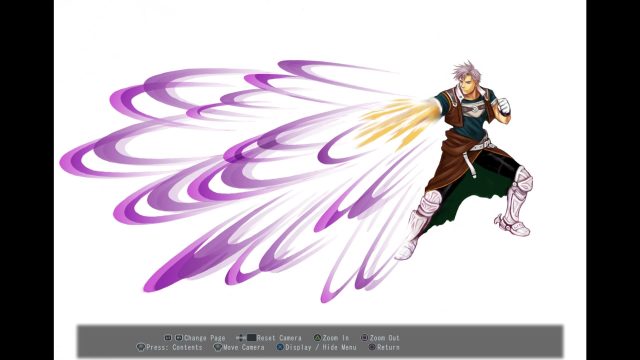 Aria of Sorrow, simply put, is worth the entry fee by itself. Featuring fan-favorite Soma Cruz, the narrative is turned on its head, as Soma is an unsuspecting teenage transfer student and an unlikely lead. It makes for a more engaging story, as we’re experiencing the world alongside of Soma (not someone who was trained as a killing machine). All to the tune of a bizarre 2035 backdrop.

We also get the “soul” system —  a natural progression of the magic mechanics of the prior two GBA entries — and it applies to multiple facets of Soma’s build. In short, it has one of the most fun and open-ended build systems in any Castlevania, on top of fantastic level design. Between Soma, the foundational gameplay, and the castle itself, Aria of Sorrow has it all.

Dracula X is the odd-game-out here, as it’s a purely traditional level-based platformer with some extreeeeme twists. It’s kind of like a super-charged classic Castlevania (fitting given that it was released on SNES), with stylistic intense music, plussed-up subweapons, and “supers,” akin to a fighting game. Reception to Dracula X has been historically positive, but many consider it infamously difficult. Your mileage may vary, but I consider its inclusion a bonus.

All four titles benefit from an emulation menu that’s both uniform and useful. You can save and load up to 10 states on top of the baked-in save features (Dracula X has passwords, and I love it for that), tweak the screen a bit, toggle extra information (like which card [ability] an enemy can grant you when killing them), change the wallpaper, check the encyclopedia for info, and swap your controls around.

The latter two are paramount in grasping why this compilation rules. The encyclopedia is extensive for the Metroidvanias, providing at-a-glance info for every single item or enemy in the game. You can pore over it for minutes at a time and not get bored, and it serves as a fantastic tutorial for total newcomers; given how there’s some inside baseball afoot, it’s for the best. 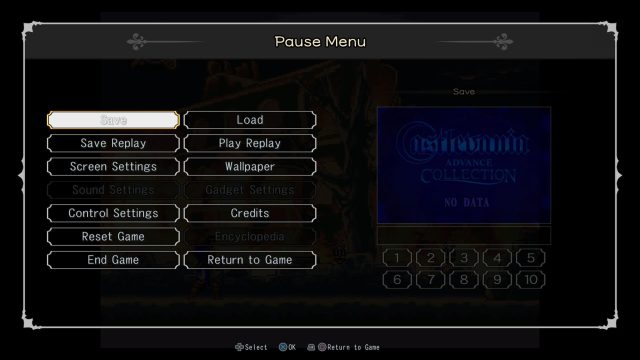 The control swapping option is also much appreciated. Every single button can be changed to something else, and it’s immensely helpful for the GBA games that have limited buttons. It essentially adds functionality to those games if you can trigger quick shortcuts with a more helpful button you’re comfortable with.

You can also rewind the game with a quick button combo while you’re playing (no clunky separate menus). It’s very streamlined and can be done instantly, to save a run and/or a boss fight; without annoyingly interrupting your game. One really neat trick, which our own Jordan Devore pointed out recently, is that you can use the rewind mechanic to farm and grind for ability-granting cards in Circle of the Moon.

So you have three lengthy Metroidvanias and a platforming classic to take up your time, on top of a few other extras. If you’re keen to listen to some tunes you can queue up the music player, which is especially rad on the portable Switch. Each game also has American, European, and Japanese edition toggles (with separate saves), and there’s a gigantic image dump to scroll through. That dump really is something, as Konami packed in a ton of concept art as well as full-on manuals in multiple languages. If you ever played or rented these games during their original release eras, the nostalgia will hit you like a truck.

Castlevania Advance Collection really showcases a side of Konami we don’t see very often anymore. On one hand, they trot out old franchises with low-effort projects and try to essentially trick people into buying them. On the other, they are capable of putting out old games in a format that’s not just well crafted, but also seeks to preserve classics that you can’t easily find. The company is an enigma.