It’s good to be bad

On a daily basis we get notices for a host of mobile game launches — usually the week of. Most of them are unassuming, and since there are so many titles, it’s tough to sift through the pile and find the real gems that are worth covering.

When Destructoid CEO Hamza Aziz sent Castle Doombad across my desk, even with the Adult Swim name, I wasn’t drawn to it. Six hours later I lost track of time — it was 2AM, and I had been playing Castle Doombad nonstop.

This is a gem, folks. 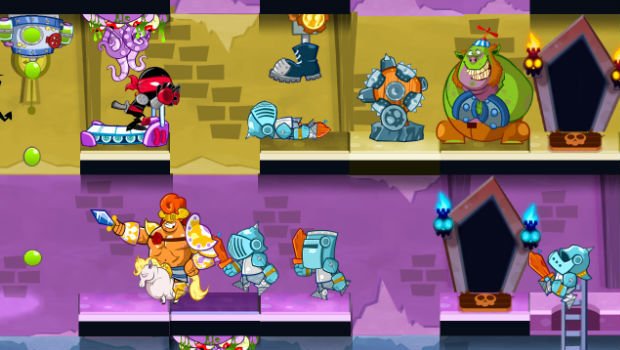 As you may have heard, I’m a huge fan of the trap genre. The only problem is, even throughout all of gaming history, there aren’t that many of them around. That’s where Castle Doombad comes in, and it’s a perfect place for newcomers to acclimate themselves to the style. You play the role of Dr. Lord Evilstein — a sort of cross between Skeletor and Dr. Doom — and it’s your job to stop any do-gooders from rescuing the princess.

That’s right, you’re the bad guy, and you’ll have an entire castle at your disposal filled to the brim with traps. The amount of gadgets you can place is dictated by your “scream” currency, which periodically fills as your captured princess shouts for help — think Monsters Inc., and you’ll have an idea of the amount of charm that’s present in Doombad.

The action takes place on a giant board in a grid-like fashion with multiple floors, with enemies coming in at any point — usually the front door. At any time your rivals may throw a ladder up to a window or dig a hole into your fortress though, so you also need to be on your guard at all times. One of the best parts about this being on mobile devices is that you can instantly touch and place traps or objects, or just drag them. Other than a few camera issues on giant towers I didn’t have much trouble, and the way the controls are implemented here are brilliant. 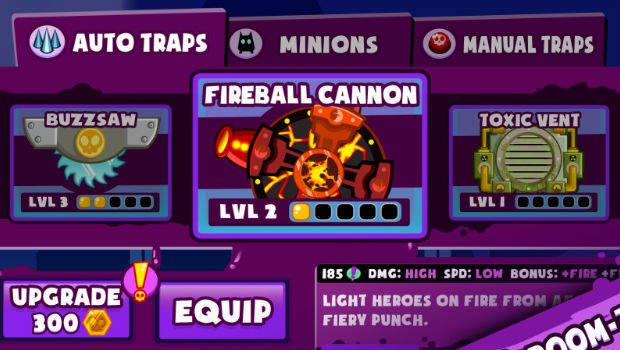 There are three fundamental families — automatic tools, minions, and manual traps. You can pretty much custom tailor any combination to your liking (for instance, it’s possible to beat levels with only manual cues), but you will need to bust out a few staples occasionally, like the ceiling tentacles that pry shields and helmets from a hero’s grasp. The sheer variety of traps present is pretty insane, ranging from your typical spike floors to James Bond-esque laser beams, to slow-inducing AC units, to cuddly demon minions.

There’s even a few out-there additions like a slot machine and a giant oversized troll that just sits there and blocks hallways. Each trap is upgradeable, and after putting some coins into them, they change their appearance and function, sometimes providing all new tactics to account for. I went in expecting a pretty shallow experience but came out theory-crafting the possibilities even when I wasn’t playing it — kudos to the team for giving the traps so much depth.

You’ll need all those evil devices too, as enemies range from Rambo parodies with knives in their mouth to super heroes, to good old fashioned medieval themed foes. The AI isn’t particularly smart, but there is strength in numbers, and enemies like the Indiana Jones themed auto-mechanics can destroy your traps. The gun-toting and eye-beam blazing hero units can be a hassle as well, as they can target and destroy organic traps and minions. 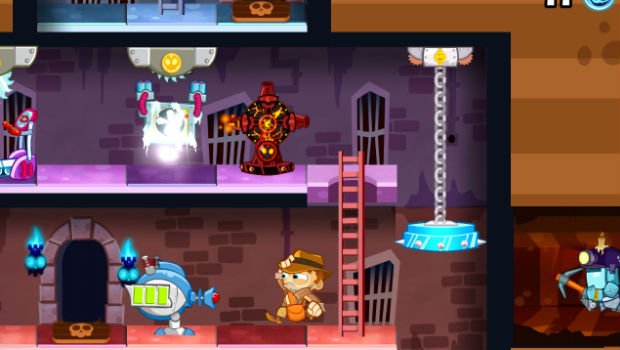 There’s tons of content in Doombad — I’m talking 10 hours, minimum. In addition to 45 levels strewn about over three worlds, there’s an Endless Mode that’s unlockable after you complete the campaign, and a few “challenge” stages that will put all of your skills to the test. It’ll take you much longer to earn everything and “crown” every level (earned by completing a stage without anyone touching the princess), and I’m still working on my 100% rating as we speak.

The dreaded IAP (in-app-purchases or microtransactions) — the bane of PC and console gamers — is present, but thankfully, it doesn’t ruin the experience. Not only did I make it through the entire game without spending a dime, but it also isn’t intrusive in the slightest. First off, unlike many Adult Swim games, Castle Doombad is ad-free (so far so good). There are also two currencies — gold, and “Evilness” Tokens.

You can earn gold by completing a stage, and the better you do, the more you earn. In this regard, it’s just like any trap or simulation game ever made. If you want to spend $1.99 on a coin doubler you can (even $5 is a steal for Castle Doombad), but I still completed the questline without one. If you want to earn everything you will most likely have to do some grinding in existing stages, but you can easily finish every level without a lick of tedium. 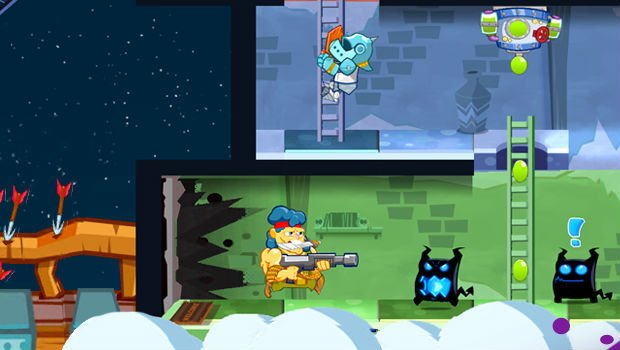 Doom points are accrued by completing challenges, like “slay 50 knights” or “fry five ninjas.” They can be used as “cheat codes” basically, allowing you to use extra super powers while in a level, but you won’t need them if you’re up on your game and start learning the ins and outs of your traps. In short, I didn’t feel the need to buy anything, and I didn’t buy anything — win-win.

Castle Doombad is one of the best games I’ve played on the mobile platform — full stop. It’s charming, the visuals are likable and sleek, and it suits a touch-based interface perfectly. For a mere few bucks Doombad simulates the experience of many full-on retail priced trap games, and that’s a pretty rare accomplishment. So long as you’re willing to take the time to learn the ins and outs of each individual trap and fine-tune your tactics (you will fail more than once), buying this one is a no-brainer.