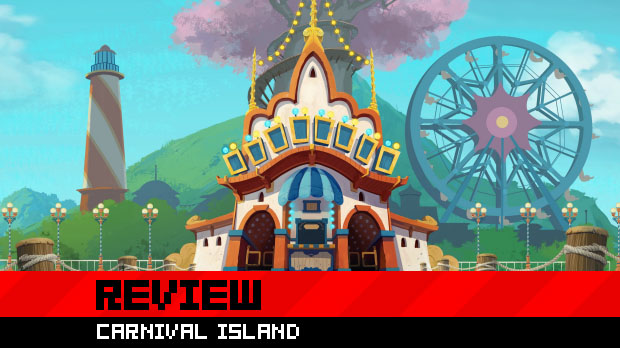 A year removed from the PlayStation Move’s launch, one should expect that tech demos and minigame compilations would be out of the door to make way for the kind of genuinely rich experiences that were promised.

Carnival Island is a compilation of minigames that demonstrate the technology of the PlayStation Move. 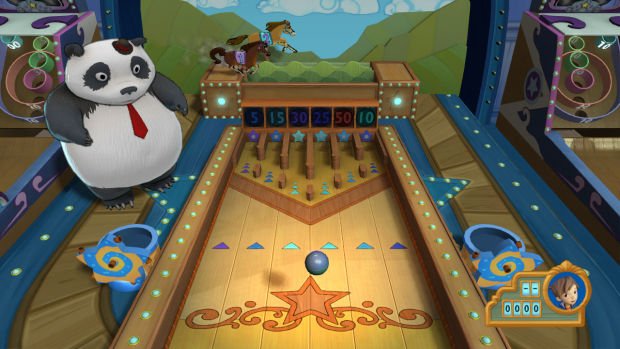 Carnival Island has a name that really does say it all. One look at the cover, with its illustrations of vapid funfair chicanery, lets you know exactly what you’re getting. Following on from titles like Carnival Games, which have permeated the Wii’s library since 2007, Carnival Island aims to do nothing different while providing its range of familiar festival-based motion exercises.

The contrived “story mode” will see players exploring the tiniest carnival in the world as they play games and bring life back to an empty fair. Broken into four distinct realms, the titular island provides various stalls that contain a series of themed games. Each game has a set of nine challenges. If you successfully complete one challenge, you’ll bring an animal to life, which will act as a mascot and cheer for you during games. If you complete two challenges, you’ll unlock the next stage of the minigame you’re currently playing.

For example, coin toss is a simple game in which you flip coins onto markers and score points. Completing a challenge, such as scoring a certain amount of points, will unlock a cartoon zoo creature which will sit on the screen and make gibberish noises while you play. If you complete a secondary challenge, such as getting one coin each on every score marker, you’ll unlock the next coin-themed game, Nom Nom, which puts an extra spin on the coin toss format by introducing a mechanical yeti that will spit out extra coins when you hit flashing markers. 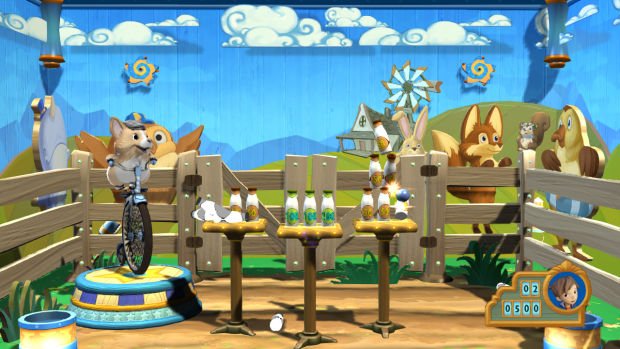 This is the structure the entire game follows. Each stall contains multiple variants of its specific game, with varying degrees of difficulty, and every map location has up to two stalls each. There’s some decent variety in the games, with some variations that border on clever (piloting frogs onto lily pads is a particularly interesting idea), but nevertheless many of the games feel incredibly similar to each other in terms of input. There are only so many ways you can throw balls, hoops and coins, so the entire game starts to feel rather mundane and old pretty quickly, save for the occasionally interesting game variant.

Extras include spending tickets earned in games to unlock costume pieces for one’s avatar, but since the island is actually little more than a series of animated menus, there’s barely any point. The player’s character is barely seen and is never directly controlled, so outfitting him or her seems rather pointless. There are also balloons to buy and a “hall of mirrors” in which players distort images of themselves as seen by the PlayStation Eye, but again the entertainment value here is shallow at best, and hardly unique to this experience.

Despite boasting over 35 games, Carnival Island can be beaten in about two hours, with players more than able to see everything the game has to offer within that time. As well as the main story mode, up to four players can compete in the various attractions using multiple or single Move controllers. Still, the games are not engaging or unique enough to really encourage spending too much time on the island. 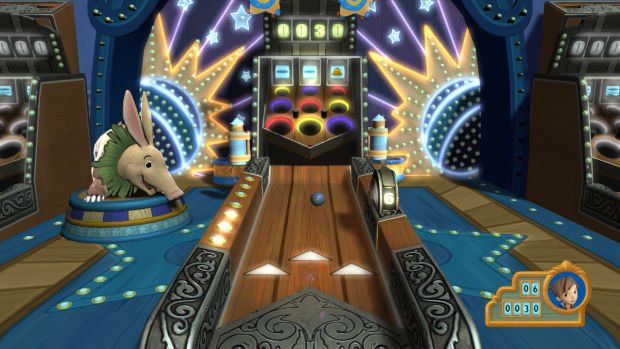 As a launch title, Carnival Island might have been an interesting demonstration of how precise the PlayStation Move is. It’s certainly an excellent showcase for the technology and how accurate its mimickry of player movement is. The catch is that we know what the PlayStation Move can do, and we know how accurate it is by now. With its bunch of mindless minigames and saccharine carnival aesthetic, Carnival Island is nothing we haven’t seen before. It’s quick to show everything it has, and it shows very little of value; there’s simply not much point in a game like this anymore.

Those players who don’t have any minigame compilations but need something to shut their kids up might find worth in Carnival Island, as it’s at least good at being a shallow selection of hackneyed diversions. Anybody who has played any other motion-based carnival adventure, however, will find nothing remarkable at play with this one — not unless they really want to see animated raccoons screaming incomprehensible drivel at them.