Sega doesn’t really have the best track record when it comes to its licensed Marvel videogames. Gamers shouldn’t be surprised, as these are titles put through the virtual ringer. It’s like a game of IP telephone: we’re talking legendary comic-book icons paraphrased for film, and then later re-translated for an interactive medium.

The results are rarely pretty. Sega’s last attempt, Thor: God of Thunder for PlayStation 3 and Xbox 360, was an outright tragedy. While attempting to play though it, I oscillated between shouting and uncontrollably sobbing. So when Sega’s latest, Captain America: Super Soldier, landed on my desk last week, my stomach literally dropped.

Imagine how shocked I was to find that, while it doesn’t do anything original or extraordinary, Captain America is a competent and fun experience from start to finish. 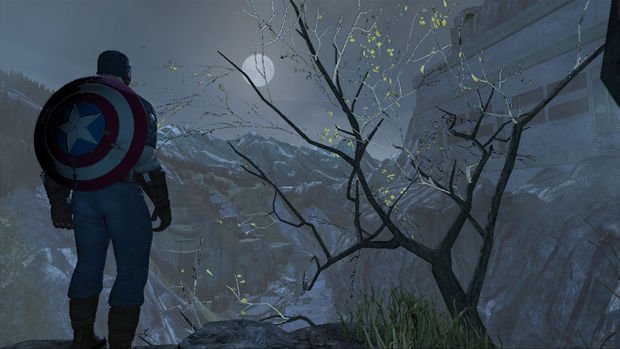 As you’d expect, the release of Super Soldier is carefully timed to coincide with that of the First Avenger film that releases in the same week. Even so, Super Soldier isn’t a film-to-game adaptation, thankfully. Instead, it borrows bits (including character likenesses and design) from the film, while leaning on the comic book source material to flesh out the experience.

Written by veteran comic book writer Christos Gage, Super Soldier finds Captain America romping around a castle, punching HYDRA terrorists and associated mechanical beasts in their HYDRA and mechanical beast faces, respectively. The plot weaves in familiar faces from the comic books and the film, including Red Skull, Arnim Zola, and the viridescent-haired Madame Hydra. Fans will appreciate the nods to the comics, and those looking for a pick-me-up will love the “there’s a hero in all of us” message, but it’s nothing to write home about. There certainly aren’t any real twists, and nothing out of the ordinary or particularly shocking happens. 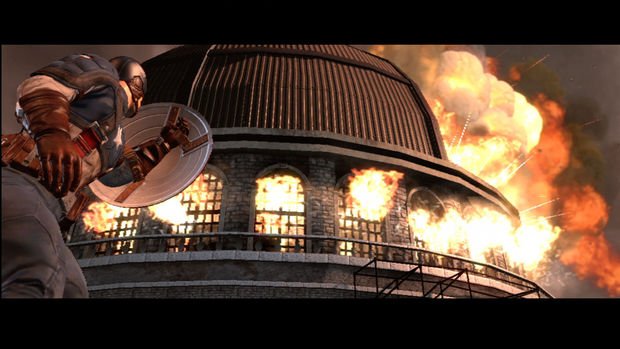 The shadow of Rocksteady’s Batman: Arkham Asylum looms heavy over Super Soldier, and developer Next Level Games cribs many of that game’s ideas shamelessly for its own title. Particularly when it comes to combat, Captain America’s single-button, timing-based brawling seems inspired heavily by Arkham Asylum. Of course, if you’re going to pilfer concepts from other titles, you could do worse than drawing from an industry-wide “Game of the Year” nominee. Super Soldier‘s combat is simple, yet effective, designed in such a way that Cap can easily dispatch enemies from any angle. The Star-Spangled Avenger flips and rolls around foes with ease, delivering stylish and acrobatic justice with fists, feet, and trusty shield.

Next Level Games doesn’t re-write the rules of combat as penciled by Arkham Asylum, and that’s mostly fine. The flow of the game’s combos looks good on-screen, with Cap’s agility a major focus, and a satisfying counter system (which also seems borrowed flagrantly from Arkham Asylum) tying things together. Performing specific moves in combat — deflecting a bullet with your shield, or countering and dodging attacks — will build up a special meter that, once full, lets you unleash a single, ferocious slow-motion attack. Their animations seemingly vary at random and from enemy to enemy, each delivered with a gratifying crunch.

Given that so much of the game is built around this combat system, it’s not surprising to learn that after a few hours, you’ve likely seen it all. There are few combat upgrades to be earned, a total of only six, and I found I didn’t even have to use some of them. Battling foes always felt good and was entertaining enough, but it became difficult to ignore the monotony in the final few hours of the adventure. 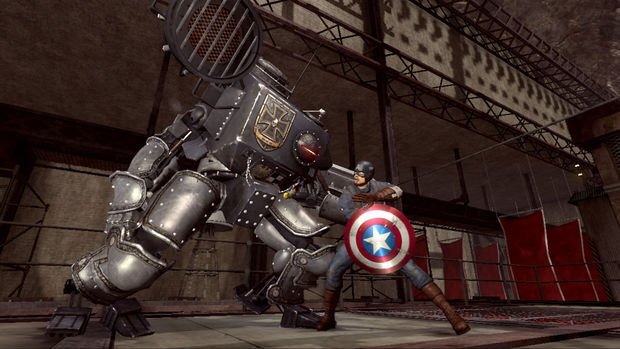 Super Soldier isn’t all combat; there’s a sprinkling of platforming and castle exploration to mix things up. In many instances, Captain America must climb, wall-run, swing and hop to reach new areas. Where and when you can do this have all been determined ahead of time — there are only one or two paths you can take, and the game will highlight where you can climb or swing. As Cap leaps to a pole and swings, tapping the button a second time will cause him to smoothly transition to the next platforming point. If you miss your timing, you won’t fall, but your progression won’t go nearly as smoothly. Outside of using your “Tactical Sense” to see where to go next, there’s no challenge in the platforming to speak of. Timing your button presses to swiftly and fluidly navigate a series of traversable objects can be fulfilling, but ultimately feels a bit empty.

Broken up into 18 chapters, Super Soldier feels like a linear experience unless you choose to deviate from critical story paths. The castle and surrounding areas beg to be explored, with an underground sewer system connecting key areas for quick travel, but the game offers no compelling reason to do so. Outside of the collectibles scattered all over the damned place, that is.

As it turns out, Captain America is somewhat of a kleptomaniac. This guy picks up everything he sees, and he’s got a peculiar fondness for ceramic eggs, it seems. And film reels. And dossiers. And beer steins. And whatever else he can get his hands on. Outside of the game’s main objective (which is “beat things up until the credits roll”), there are collectible goodies tossed about everywhere. Unless you’re into concept art and extra costumes, some of which offer up bonuses beyond changing Captain America’s look, there’s no real reason to explore every nook and cranny of HYDRA’s fortress. 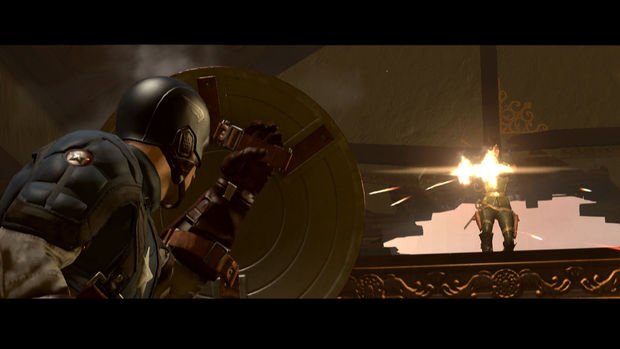 It’s regrettable that Super Soldier is technically inconsistent, but not surprising given the likely “get this out the door before the film hits theaters” production mentality. To its credit, I didn’t run into any game-breaking bugs or glitches, which is more than can be said about Sega’s Thor title. But on the other hand, the game’s framerate sometimes dips when simply shifting the in-game camera, and nothing else in the world looks quite as good as the game’s detailed hero.

What’s so shocking about Super Soldier, despite my various issues, is that it’s not entirely awful. In fact, missed opportunities and the reality that it doesn’t bring anything fresh to the table aside, I actually had quite a bit of fun. If you’re seeking a challenge, look the other way — on the game’s default difficulty, I finished the game in about eight hours and saw fewer than five “game over” screens. But going through the motions, particularly the flashy combat, was certainly enjoyable.

Side note for those into earning Xbox 360 Achievements or PlayStation 3 Trophies: Captain America: Super Soldier is a complete pushover. By the time I had finished the 360 version of the game, I had earned more than 70% of the game’s Achievements without even going out of my way to do so. Putting another half an hour into the game’s additional one-off challenge modes earned me a handful more. Looking at the rest of the list, almost everything seems like “give me” if you want to put in just a modicum of work.

In a post-Arkham Asylum world, comic book and videogame fans know that they deserve more than sub-standard shovelware carelessly pushed to retail to capitalize on a popular license. Captain America: Super Soldier manages to slightly transcend mediocrity by delivering a solid, yet derivative experience that could have ended in disaster. By no means is it “must-play” summer gaming, and that’s pretty much to be expected given that it’s based on a “must-see” summer feature. But those looking for an inoffensive third-person weekend romp could do a lot worse.