Best in the West

Call of Juarez is a series I’ve always wanted to enjoy. It’s hard not to admire its attempts at clever storytelling, and the commitment to creating a wild west first-person shooter in an age where everything’s about blasting terrorists with shotguns. Sadly, it’s a series that never lived up to its potential.

The last game in the series, The Cartel, was the worst by far, to the point where I was legitimately shocked another game in the series was coming. So utterly atrocious was The Cartel, I was sure Gunslinger would be no better, and Ubisoft’s near-silent promotion of the game wasn’t instilling much confidence.

Just goes to show that you can never predict a damn thing. Call of Juarez: Gunslinger is the best damn game in the series. 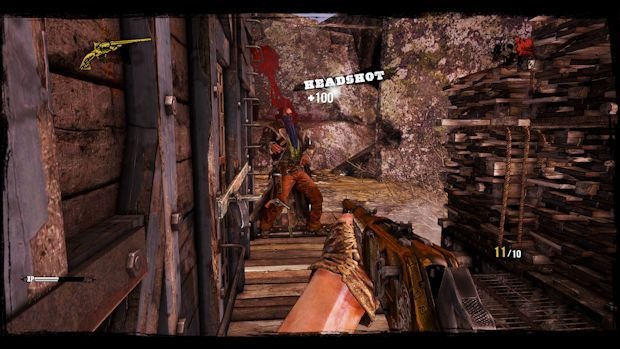 Call of Juarez: Gunslinger may be a downloadable title with a modest asking price, and it may be a short experience at just a handful of hours, but it packs more entertainment into its humble package than all the other Juarez games combined. Telling the tall tale of Silas Greaves, Gunslinger is a tale of revenge, bounty hunting, and good old fashioned American justice.

This latest installment takes inspiration from some unlikely places, one of the strangest being Supergiant Games’ Bastion. The story unfolds from the perspective of a grizzled bounty hunter relating stories from his past in a saloon, and as such, he constantly narrates the tale while the player is fighting through levels. This leads to some cool stylistic events, with the world changing around Silas as he remembers more details, and sometimes the entire level rewinding as it’s revealed players just spent five minutes playing through one of Greaves’ hypothetical tangents. Time often slows as Silas banters with those listening, and the question of whether or not you’re playing through nothing but lies constantly hangs overhead. 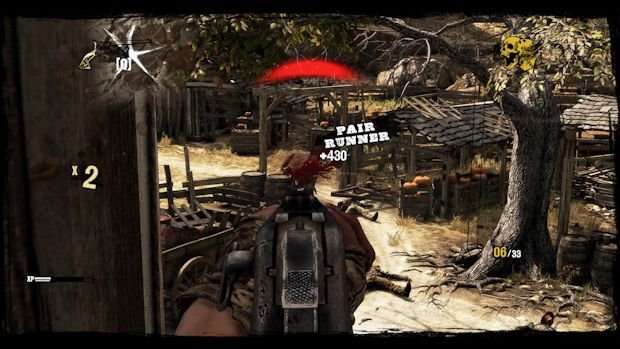 At times, the narrative interruptions, especially when the gameplay slows down to a crawl, can get a bit exasperating, but those moments where he starts arguing with another character, stops telling the story to go to the bathroom, or straight up invents scenarios that suddenly change the way the game is played, more than make up for it. While the whole “quasi-dynamic narrator” thing has been done as far back as A Bard’s Tale, I have to say Gunslinger‘s done it better than most, adding some genuinely clever and original ideas to the premise.

Gameplay is similarly inspired, with shameless nods to Borderlands throughout. It’s not just in the new, cartoon-like graphics. Enemy bosses are introduced in montages ripped straight from Gearbox’s shooter series, while Silas’ three upgradable skill trees and the tone of the violence all appear to be heavily influenced. This influence, however, only works in Gunslinger‘s favor, leading to a game with more energy and soul when compared to the flavorless, creatively barren Cartel. 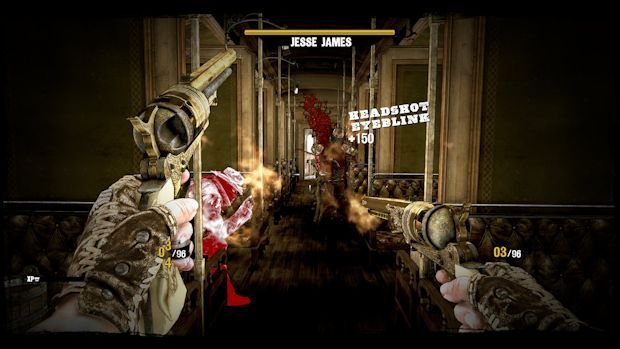 Despite all this, there’s a core familiar to Call of Juarez fans. As a Wild West shooter, the guns are limited to pistols, shotguns, and rifles, and the skill trees allow players to boost their prowess with each — becoming either a dual-wielding handgun expert, a long-range marksman, or a close-quarter beast. Players rack up experience points by chaining together kills, going for headshots, shooting moving targets, and performing other such feats, the game providing dynamic on-screen feedback for such kills in a manner similar to Bulletstorm. The effect leads to a more arcade-like experience, albeit one still very rooted in the more precise, less guns-blazing, action of the series.

As Silas takes down foes, he fills a Focus meter which can, like previous games, allow him to see enemies more clearly and drop them in bullet time. There’s also a second meter that, when full, gives Silas one last change to avoid a fatal bullet, letting players dodge from left to right when their health is at zero to cheat death and regain HP. As well as helping the player out tremendously, it looks very cool indeed to swerve out of a bullet’s path with Matrix-like grace. 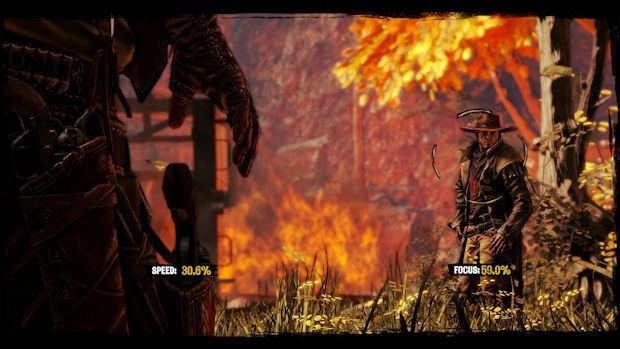 Duels naturally make their return, with players having to keep a reticule focused on single targets while keeping their hands near a weapon to increase the chances of shooting first. Players get the option to draw before the enemy is ready, or wait to react to their movements, leading to either a dishonorable or honorable kill. It doesn’t really change things too much, but the honorable path definitely leads to more satisfying duels.

Gunslinger‘s action is remarkably tight, well paced, and polished to a shine. The guns feel great to use, each of them powerful in the right range, but weak in the wrong. Enemies pour out regularly, and each shootout is pleasantly intense, with the kill feedback providing a ton of encouragement to keep the bullets flying. Add to that some really excellent levels, like the brilliant rampage on a train or the bizarre battle against native Americans, and you’ve got a terrific little campaign. 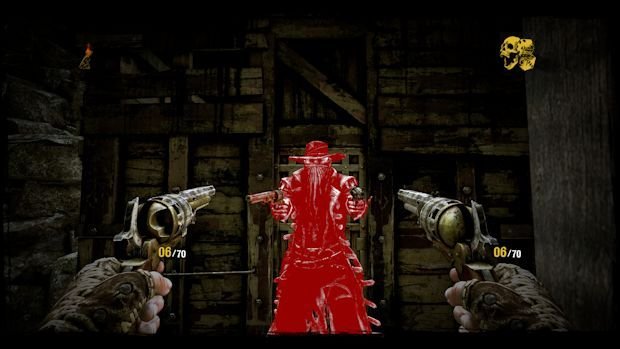 The biggest criticism would have to be that, at times, the game can get repetitive, even with such a short campaign length. Limited to pistols and one other weapon — either some form or rifle or shotgun — it grows tiresome to duke it out the same old way every single time, with little weapon variety, or even a need to switch between rifle and shotgun if you’re working on a particular skill tree. The game’s general wit and clever ideas do enough to keep one invested, but indeed combat will be a slog at times.

If you’re eager for more when the campaign’s over, there’s a New Game + mode that allows Silas to retain his skills and unlocks in a harder difficulty, as well as a score-attack Arcade mode and a duel rush mode. None of it is content that will keep you coming back forever, but there’s enough to justify the asking price. 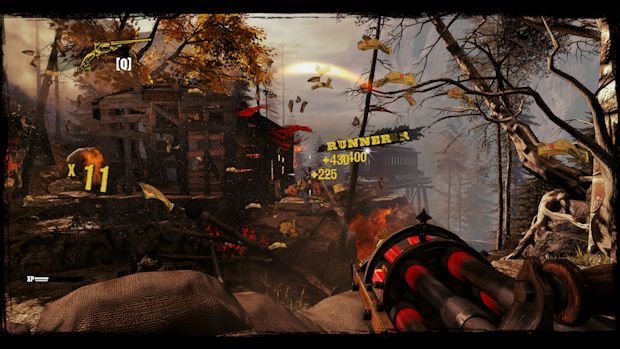 It’s funny that a downloadable title can be so visually superior to any of Call of Juarez‘s retail counterparts, but the new illustrative art style is absolutely lovely. Characters are bold, environments are colorful, and the comic book stylings of the HUD and on-screen text give it a confident and eye-catching design. The voice acting is decent, with Silas’ narration giving us a crucially affable character to enjoy, while the soundtrack is an easy highlight, with music that captures the Old West feel while being contemporary enough to get one in the mood for some videogame violence.

Above all else, however, it’s the polish that really surprises me. Techland is not exactly known for visually pleasant, stable experiences. Its biggest game, Dead Island, is ugly and glitchy, while previous Juarez games have had no shortage of bugs and issues. The Cartel in particular was riddled with visual and audio problems, and yet Gunslinger played smooth, looked beautiful, and didn’t give me any sort of trouble. I was actually shocked to see Techland’s name in the credits, as the difference between this and The Cartel could span the breadth of our galaxy. This is what one could call “AAA” production values, all wrapped up in a little downloadable side-story. 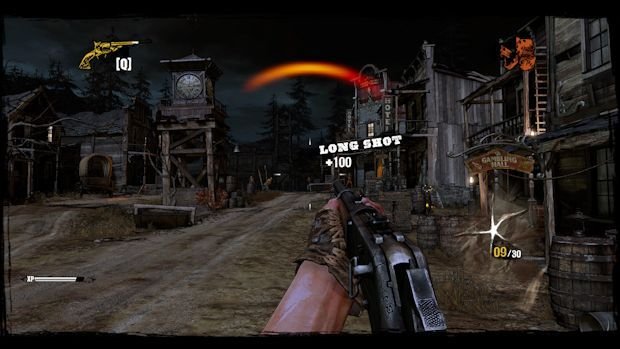 Call of Juarez: Gunslinger is a funny game and a satisfying romp, with clearly influenced ideas that all have their own unique little spins. I’ll fully admit that I went into it expecting another damp squib, but came away thoroughly impressed. While it sadly won’t get much attention, given the fact it launched quieter than a church mouse with its mouth stapled shut, I wholly recommend it to fans, newcomers, and those who felt burned by the last awful game in the series.

Not only is Gunslinger the best Call of Juarez game, it’s a damn fine and worthy shooter in its own right.

Filed under... #Call of Juarez: Gunslinger#PSN#Techland#Ubisoft