[Update: We originally said that you couldn’t swap Ally/Friend Codes as in Black Ops. Turns out you can, so that line has been corrected.]

Since Internet winner Jim Sterling has already published Destructoid’s official review of Modern Warfare 3, this article is strictly looking at how successfully the game has been ported to the Wii. Assessment of the game’s content is therefore off the menu, except when differences to the 360/PS3/PC versions alter the gameplay in some noticeable fashion. There are a few such cases, making the Wii iteration slightly distinct from its HD counterpart not only in how it looks but also in how it plays.

You will also notice that every image contained in this review is a generic screenshot from the HD version. Activision has had some success in quietly releasing Wii versions of their previous Call of Duty games, with each comfortably selling over a million copies despite being downports with zero marketing presence. “Quietly,” in this case, might be exaggeration of the decade. Screenshots of the game are virtually impossible to find, and I lack the equipment to grab my own from my console.

Nevertheless, after Treyarch did respectable work porting Black Ops to the Wii last year, can they pull the same trick with Infinity Ward’s game this time around? 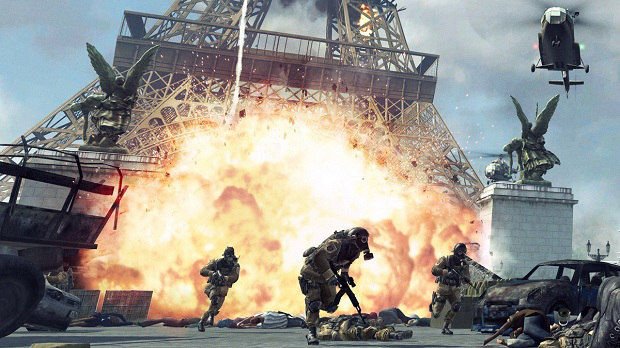 The good news is that Treyarch has once again produced a solid port of what must have been a difficult game to fit onto Nintendo’s underpowered console. The campaign is here in full (albeit with a fairly significant chunk of backstory missing, due to Modern Warfare 2‘s never getting a Wii port), even if you can hear the poor Wii straining at the bit to keep up, chugging away as though a miniature Montgomery Scott were hard at work behind that glowing disc drive, screaming, “She cannae take it no more, cap’n!” In visual terms, anyone coming over from the HD versions will admittedly have good reason to raise a Shatnerian eyebrow. Keeping the scale of the spectacle intact on a console significantly weaker than those for which the game was designed is a notable achievement, but a significant amount of detail has had to be sacrificed in the process.

At its best, the game looks like a high-end PS2 game, putting it somewhere in the middle ground of the Wii’s most visually appealing titles in the genre (Metroid Prime 3 and GoldenEye 007 representing the genre’s graphical top tier, for points of reference). Some of the levels look terrific — the New York set opener, despite not being recreated as fully as on the HD versions, captures the required size and spectacle to sell the scale of the conflict. The “Goalpost” mission is similarly effective, throwing enough action at the screen to distract from the visual cutbacks more apparent in slower-paced missions such as “Hunter Kill” and “Back on the Grid.” 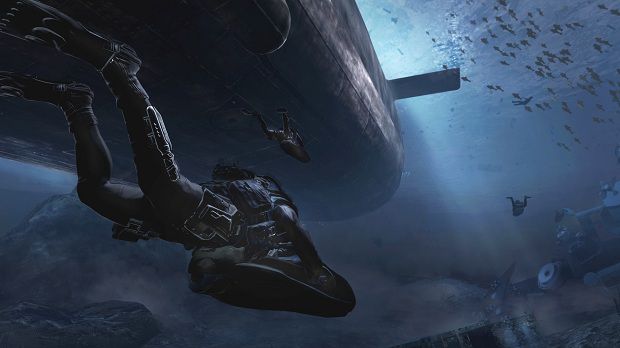 Although the visual inconsistency can be jarring (especially since the game seems to have been made noticeably darker to compensate, with no option to increase the brightness), it allows the framerate to be kept at a manageable level, dipping only occasionally and slightly below its 30 fps target. This is particularly important for the Wii, because the question of whether or not to pick up this version of the game over the HD ones boils down to your willingness to sacrifice graphical prowess in favor of a control system whose excellence depends on that stability.

Following the otherwise lackluster The Conduit, the Wii Call of Duty games took some of the biggest leaps in getting pointer aiming from its nascent teething problems in Red Steel to the dual analog-annihilating powerhouse it is now. That isn’t empty hyperbole — Modern Warfare 3 is compatible with the Classic Controller Pro, and despite Treyarch’s adding copious quantities of auto-aim to compensate for its shortcomings, it is immediately apparent when taking the game online who the dual analog players are by their slower turning and inability to match the precision and dexterity of those using the Wii Remote.

That isn’t to slight people who prefer analogs over the pointer nor that there isn’t room for both, but to suggest that once a player is used to its idiosyncrasies, pointer aiming can be devastatingly effective. Modern Warfare 3 once again isn’t at the top of the pile in terms of Wii FPS controls — Red Steel 2 and Conduit 2 both used Motion Plus to gain a little extra smoothness that made all the difference, while Metroid Prime 3 was locked at 60 fps. Regardless, anyone who has played a Wii COD before will immediately feel at home, where everything is as customizable as it needs to be for newcomers to make the transition as comfortable as possible, even if it means adapting to a new control vocabulary.

There are a few niggles that need to be pointed out (pun intended), however. Controlling turrets can be frustrating, as each seems to have its own sensitivity, despite the existence of a dedicated slider in the control options. Mounted guns tend to be stiff, meaning the slider needs to be pushed right up, yet a mortar in one mission is ridiculously over-reactive and near impossible to control unless the slider is pulled right back down again. For the gunplay that forms the bulk of the campaign, though, the pointer works superbly. 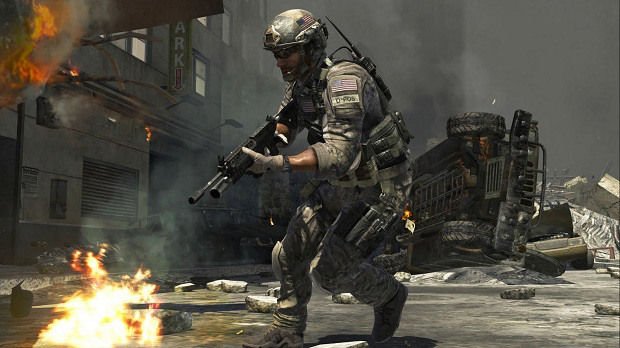 The online modes are where most players will be spending the majority of their time, and it is unfortunately mixed news on that front. On the plus side, “Spec Ops” makes its debut on the console. On the downside, “Survival” is the only mode available, with anyone hoping for “Missions” set to be disappointed. The standard online deathmatches have everything included, with the exception of some of the most intensive kill… sorry, pointstreaks — the AC-130, Predator missile, and Osprey are all kept in the hangar once again.

Before you roll your eyes, consider that their absence slightly changes the texture of the game, giving players less fear of the outdoors and making for a more run-and-gun experience than its HD counterpart (where combatants, in my experience, tend to move between indoor hiding places rather than roam constantly). The slightly lower player count also contributes to this, as it means even the best players take just a little longer to notch up the required number of kills to access the more powerful options. My personal view is that it also balances two of the pointstreak packages slightly better, with those choosing Support over Assault not having to endure three of the rewards that are most difficult to defend against.

Another downside is that, at present, the game suffers from some noticeable lag and graphical issues. If your internet connection isn’t too strong — I tested the game at my provider’s peak time (early evening) and then way off-peak (around 4am) — you have to anticipate where players will move in order to hit them, leading to entire magazines’ being emptied into thin air, even though your red dot sight was aimed squarely down an opponent’s nose. This was never a problem with Black Ops, even with weak internet speeds.

There is also a fair bit of pop-up and rare instances where graphics and subsequently clipping fail to load altogether, giving you the strange — though helpful — advantage of being able to wander through walls until the game gets its act together. Although it has yet to happen to me in about eight hours of play, there have also been reports of freezing and even data corruption in the worst cases. Fortunately, the game is patchable (not always a given on the Wii), and Treyarch has confirmed that it is aware of these issues and is actively working on a fix. The first Black Ops patch came after two weeks, so you should perhaps wait on handing over your cash until the update has been applied. And for the record, voice chat is included only for the Headbanger Headset (no Wii Speak compatibility) and there is no COD Elite integration and the ability to instantaneously exchange Ally/Friend Codes with people you have just played against appears to have been inexplicably removed. [You can still swap Ally/Friend codes.] 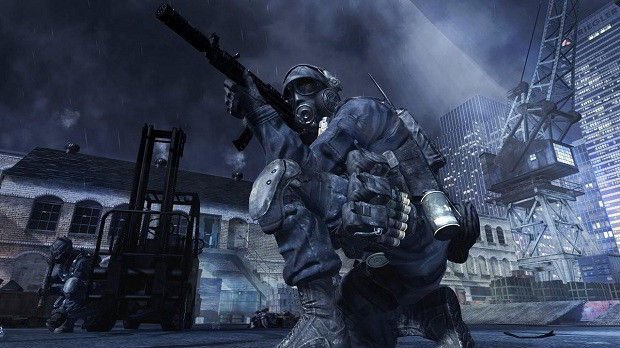 When the online multiplayer works, though, it is fantastically compelling and has a strong claim to being among the best of its kind on the console. That sums up the Modern Warfare 3 Wii package perfectly — rough around the edges and often trying to bite off more than it can chew, but with a solid enough core experience that few could have imagined on a console frequently written off as unable to provide the same spectacular experiences as its HD cousins.

Yes, you have to put up with missing Spec Ops missions, a lack of refinement in the online modes for now (add a point onto the final score should the lag issues be properly fixed), and some textures that look like they might have been drawn in Paint. On the other hand, you gain the thrilling speed and fluidity of pointer-based aiming (PlayStation owners ought to start petitioning Activision ASAP for Move integration in the next patch) and a slightly different, possibly better balanced, version of the acclaimed online multiplayer modes.

Activision may be treating the Wii port as the bastard child of the Modern Warfare 3 family, but I give the company credit for releasing the game at all, making it one of the few third-party publishers to show Wii gamers even that modicum of respect (sucks to be you, Capcom and Ubisoft). Even during this busy holiday software surge, Treyarch deserves some respect for doing a creditable job in bringing the series to an unlikely home.

[Xander Markham’s MW3 ‘Ally Code’ is 5167-4762-0921. Put yours in the comments if you own the game! When not playing with his Wii *cough*, he writes news and reviews for Flixist, the best goddamn film site in the universe, as well as television and game reviews on his personal blog.]