While Call of Duty is often regarded as the epitome of the annualized, cynically produced, lazily constructed videogame franchise, I’ve always maintained that both Infinity Ward and Treyarch expended much more effort than they were ever given credit for.

Whether it’s the underestimated storytelling prowess of Modern Warfare or the noble efforts to revitalize the COD formula with Black Ops, the overwhelmingly popular series is far more cognizant of its own criticisms than many like to believe.

My defense of the consistent quality of Call of Duty has certainly caught criticism of its own. Indeed, I am lauded as a hypocrite for daring to suggest that Modern Warfare 3 was not objectively, factually, a mediocre game. I still believe that, and I still have respect for Call of Duty as a series. However, I’ve always been mindful that the gravy train cannot last forever, and as “military shooters” are in 2013 what World War II shooters were in 2008, it’s high time Call of Duty underwent another dramatic transformation, the likes of which gave us the original Modern Warfare.

Black Ops II was a step forward in this regard, an earnest attempt to inject fresh life into a flagging idea. By comparison, Ghosts is not only a failure to capitalize on the goodwill Black Ops II earned, it’s a disappointing step backward. 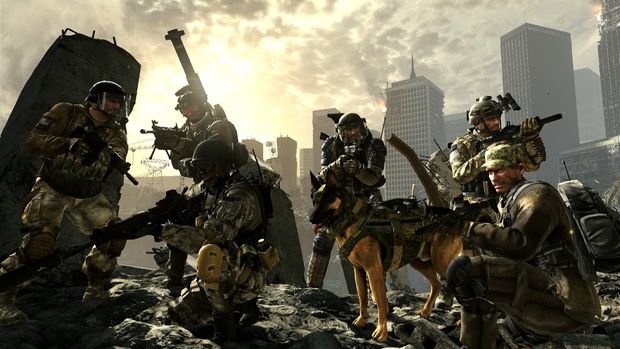 While most fans consider their Call of Duty campaigns to be little more than additional fluff, tacked onto the multiplayer, I’ve always found them a compelling draw. The stories aren’t the most engrossing, nor are they particularly deep, but they are at least energetic, explosive, and highly effective at drawing a reaction from the player, even if a few cheap tricks are employed the get it. Ghosts, by contrast, offers a startlingly lethargic solo experience, with a story lacking in character — or indeed, characters — and going through the expected motions with little evidenced enthusiasm.

The campaign isn’t exactly bad, but it is a banal shooting gallery without the remarkable setpieces or memorable moments to carry it. Very much a COD-by-numbers affair, players quickly blitz through the usual tasks with dutiful obligation. Indeed, “obligation” is a fitting word to use when talking about Ghosts‘ solo missions — the obligatory bit where a temporary player character dies, the obligatory aircraft sequence, the obligatory escape while shooting things from the back of a vehicle, the obligatory sniping part, the obligatory chapter where you’re walking quietly in grass. More than any other Call of Duty, there is an overwhelming sense of having been there many times, and having done that more than you can count. 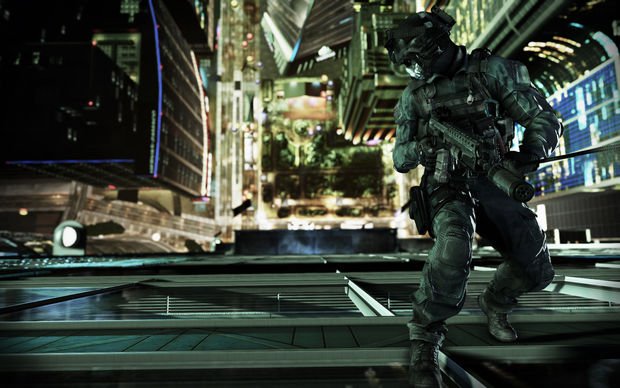 The combat is solid, but its solidarity is matched only by its tepidness. You move from small wall to small wall, shooting the enemies ducking behind their own walls, and avoiding their endless grenades. After the mission variety and unique optional objectives found in Black Ops II, it’s difficult to go back to “normal” Call of Duty, which feels comparatively dry and plodding. Without an interesting story (the American invasion plot feels like a rehash of Modern Warfare 2), and without the usual explosive pace I’ve come to expect, there’s really very little worth experiencing here.

Ghosts‘ one big attempt to stand out is the inclusion of Riley, a dog. It’s a dog. That’s what it is. In missions where Riley accompanies you, you can press a button to make the dog attack an enemy. Every now and then, you might get to control the dog and let it sneak around in grass to attack people. That’s about it. There’s something about the game industry that compels it to market dogs as massive, game changing inclusions in games. They never have been, and if Ghosts is a continuation of a trend, they probably never will. 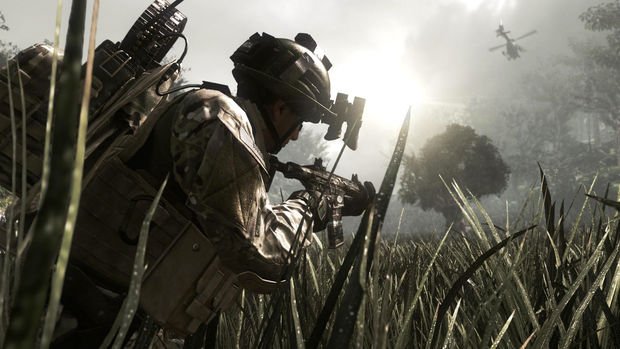 Without a campaign of note, Call of Duty hinges on multiplayer more than ever and … it’s okay. As always, various tweaks and refinements have been added, but Ghosts‘ online efforts suffer in the same way its campaign has — the previous installment added too much, and did too many things better, for this to be considered a worthy successor. While there are some new toys to play with, and you can even customize the look of your character (as well as play as a woman, finally), the core experience feels like business as usual, moreso since we’ve lost the near-future gadgets found in 2012’s installment.

A new mode, Squads, allows you to command your own team of characters in a multiplayer scenario, cooperating with friends and challenging others with AI-controlled teammates. I’ll be honest, I don’t really get the point. You’re not commanding anybody, or doing much more than experiencing an official simulation of a multiplayer match with half a lobby full. Its presence isn’t offensive, and it may be of use to total newcomers who aren’t ready to jump into full competition, but it failed to really excite me.

If one is to be diplomatic, one can say Ghosts is still better than a lot of cornball military shooter knock-offs, but formula and familiarity have won the day, as Infinity Ward finds itself too afraid to shake anything up in too dramatic a fashion. As with the campaign, a checklist of obligatory elements appears to have been steadily worked through, as the usual format of ranking, unlocking, and customization trundles along with methodical reliability.

And don’t get me wrong, it’s as reliable as it’s always been — if all you’ve ever really wanted is the same Call of Duty every single year, then you’re going to love this, because it’s as Call of Duty as Call of Duty gets. A few cute modes help break up the usual stable of gametypes, such as Infected (one player slowly turns the others into zombie-like creatures) and Cranked (chaining kills makes you tougher, faster, and able to score more points). These modes can make things less monotonous, but they riff on ideas seen in many other shooters, and really aren’t worth the buying the whole game for.

Except players can also have dogs now. Dogs make everything good. 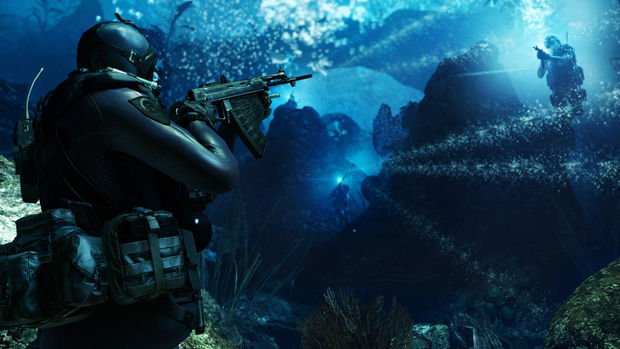 I’ve made no secret of my love for Call of Duty, and I’ve been avidly into the series up until last year, but this time around, I barely struggled to keep my eyes open for more than a handful of matches. I feel I’ve officially done this too many times to care anymore, and for as much as I’ve supported the series, this is the one that’s turned me off — at least as far as the Infinity Ward installments go. While Treyarch has steadily gotten better and braver with each new game, Ghosts sees Infinity Ward step into the role of pretender, of flagging inferior, one that doesn’t seem to care much about improving its status, not when it could churn out any old guff at this point and come out on top of the sales charts.

To that end, Infinity Ward takes a page directly of Treyarch’s book with Extinction, a wave-based cooperative mode that performs functionally similar to the ever popular Zombies mode. However, while Zombies always had a unique sense of humor and an amusing arcade quality, Extermination is a fairly bland slice of chaos, in which fairly uninteresting aliens are mowed through across blasted cities littered with quivering pustules.

As aliens are killed, one earns cash, which can be spent on new weapons, while skill points unlock temporary items that support the team. As with everything else in Ghosts, it performs its job adequately, and is not a terrible experience. It’s just not very exciting either, and yet again plays catch up to things done far better in previous installments. 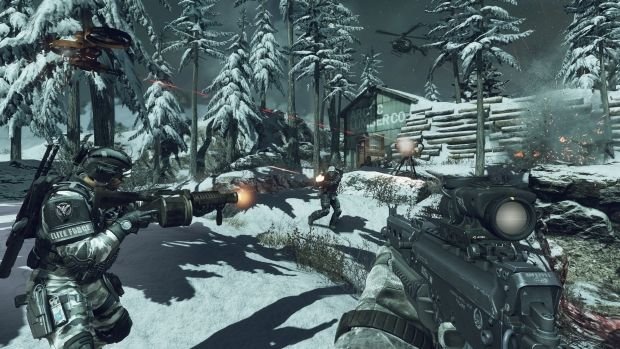 At the risk of sounding like a stuck record at this point, everything I’ve said can be said about the visuals as well — they’re not the worst, they’re far from the best, and yet again they feel highly lacking off the back of Black Ops II, which at least had cool futuristic designs to play around with. Ghosts‘ vision of a not-quite-post-apocalyptic America is bourgeois at best, an unremarkable representation that could have been eerie and unsettling, if it were presented with anything more than sociopathic carelessness. Audio is the same way — uninspired music, and the usual shooting noises, alongside bored voice actors.

A few buggy elements rear their heads too, such the audio frequently cutting out during campaign loading screens, and guns failing to switch properly when they run out of ammo. I also had to restart a checkpoint due to an event not triggering as it should. Nothing game breaking, but at this point, one doesn’t expect to see such silly little glitches in a game that’s not done a whole lot to reinvent itself.

Call of Duty may have picked up a reputation as one of the laziest, most callously developed cash cows in the business, but I’ve always believed that reputation was undeserved. Call of Duty: Ghosts, however, with its slapdash campaign and unambitious multiplayer, contains enough factory-standard cynicism to earn itself plenty of scorn. Nothing Ghosts does is especially bad, but nothing Ghosts does is worth paying any attention to. It exists to exist, a stopgap bit of filler spat out as the industry transitions from one generation of consoles to another. 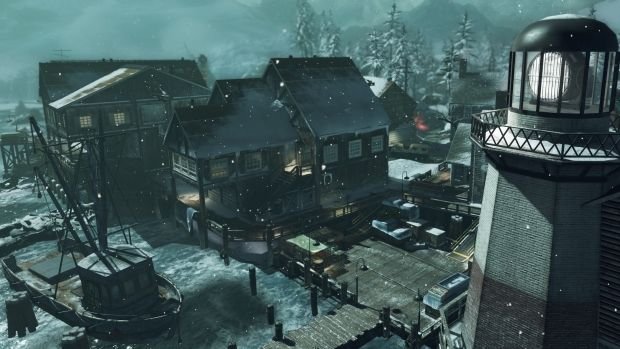 Contrary to the old saying, you can teach an old dog new tricks. Black Ops II demonstrated that with style. Ghosts, however, is a dog that simply doesn’t want to change. It knows what it is, and sticks with it. It would be a respectable endeavor, if it didn’t lead to such an underwhelming and predictable little product. What a sleepy, sleepy dog.