Treyarch has taken a unique approach to Call of Duty games that I’ve always admired. Essentially developing three games in one, their idea to meld campaigns, zombies, and multiplayer into one giant package in Black Ops II is intriguing, considering all three components feel fairly meaty in their own right.

That idea is even realized in their downloadable content, as their latest offering, Revolution, features four extra multiplayer maps, an extra zombie map, a new zombie mode, and for the first time in Call of Duty DLC history, an all new weapon.

I was surprised at the results, from both ends of the quality spectrum. 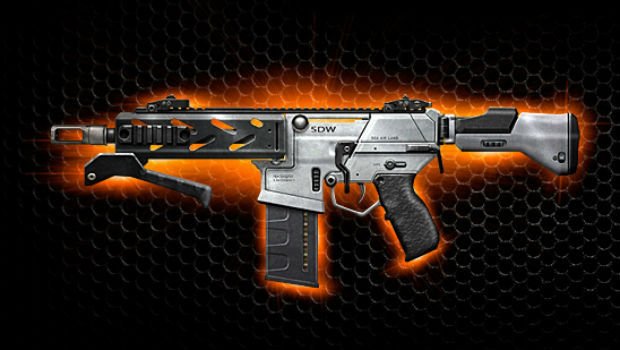 First things first, the Peacekeeper SMG is now part of the game’s meta. According to Treyarch, it’s a deadly combination of long and short range firepower. Of course, based on that description, it has the potential for extremely broken gameplay, but thankfully, I don’t think that’s the case. Although I’ve only Prestiged a scant few times, I have a decent handle on the game’s balance, and I think the Peacekeeper isn’t game-breaking in any way.

The best way to describe it is the “perfect intro gun” for rookie players who haven’t acclimated themselves to the game just yet, since you have it unlocked immediately. On the flipside, it’s not going to wow you in any way if you’re a series veteran. As a side note, you can pick this gun up in the wild even if you don’t own the DLC. 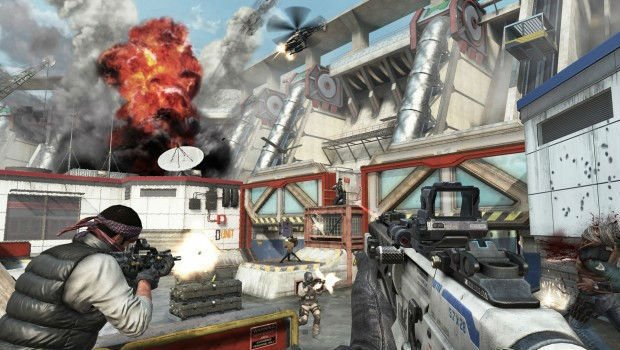 Naturally, there has to be at least one gimmick-heavy map, and that coveted spot is taken by Hydro. The main hook is that water will occasionally fill up in the core of the game, drowning any players caught in the mix, and washing their corpses off the face of the Earth. While this hazard only takes place on a small portion of the map (roughly a sixth of it), it’s relatively harmless, and doesn’t really ruin the experience in any way.

Hydro is also deceptively large. Although it may seem to only consist of a few corridors at ground level, there’s actually a few upper and lower areas that make themselves known after multiple playthroughs.

Hydro is a really fun map that should keep people busy for quite a while, as they’re learning the ins and outs of the various levels of elevation it features. 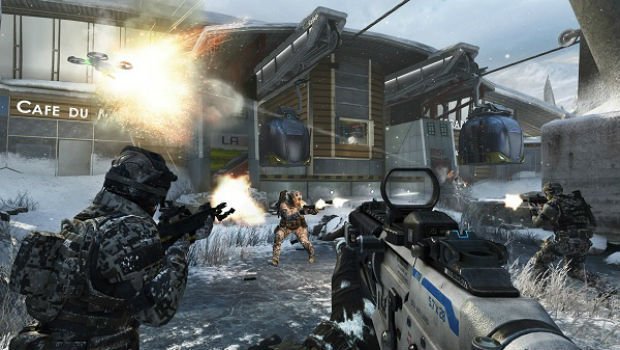 I’m kind of torn on another map, titled Downhill. On one hand, it’s a more compact version of Discovery, one of my favorite arctic stages from Black Ops‘ First Strike pack. On the other, it’s a less inspired, sometimes hokey, contrived snow map.

Tactically, Downhill is incredibly sound, and has a great mix of outdoor corridors and interesting, indoor ski lodges to keep you interested. The hokey aspect of the stage comes in with the introduction of automatic cable cars moving to and fro throughout the center of the level.

While it would have been cool if you could actually ride them, the reality is not nearly as fun — they just go back and forth, and if they touch you, you die — frequently in a comical fashion.

This is a real missed opportunity, as this gimmick could have been taken out entirely and made the map much stronger for it. Still, that’s really my only complaint, as this is one of the stronger entries in the series, and possibly the most balanced map overall. 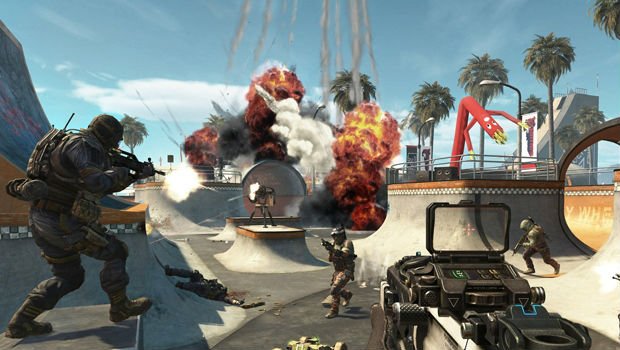 Grind is probably my favorite offering of the bunch, even if it’s not really one of the franchise’s strongest offerings. For starters, it’s a skatepark that features “Wacky Waving Inflatable Arm Flailing Tube Men” (YES!), which really adds to the character of the stage, and makes it stand out in its own unique way.

There’s also a ton of climbable skate park ramps that impair vision, including an indoor section with lots of places to hide and a large amount of windows to surprise people in — forcing you to always be on your toes.

The colors in Grind also pop, which is a nice contrast to most of the other drab maps in the game. Although the competitive crowd may not enjoy the map nearly as much, Grind is a really fun stage that’s frequently voted for in the first week of Revolution‘s launch. 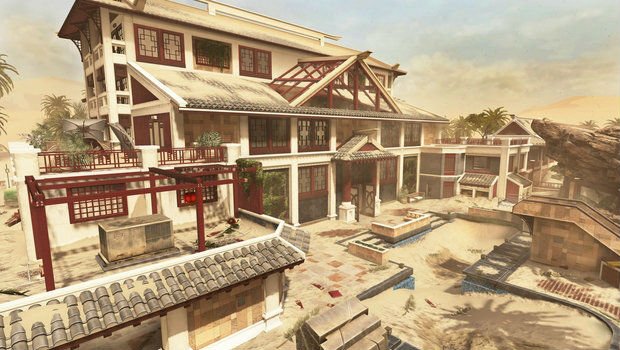 Mirage is basically the textbook definition of a “standard Call of Duty map.” It’s neither impressive or offensive, it just kind of exists. When it’s cycled into a normal playlist, you might go “oh, this map, OK” and that’s the biggest emotional reaction you’ll have to it.

The map itself is set in a portion of the Gobi desert that looks a tad war torn, but only occasionally so, due to the uneven design of the map. Sometimes it feels like the stage is incomplete, and sand was thrown over certain areas to hide that fact (among a few glitchy details, like floating stacks of bills). There are a few neat areas (like the drained swimming pool in the picture), but it’s basically just one big square with another square in the middle.

Whatever the case may be in terms of the layout though, it doesn’t feel organic, like some of my favorite DLC maps in the past — specifically the rainy Kowloon, from the first Black Ops. To be blunt, Mirage’s lack of “oomph” kind of sums up the DLC in general. 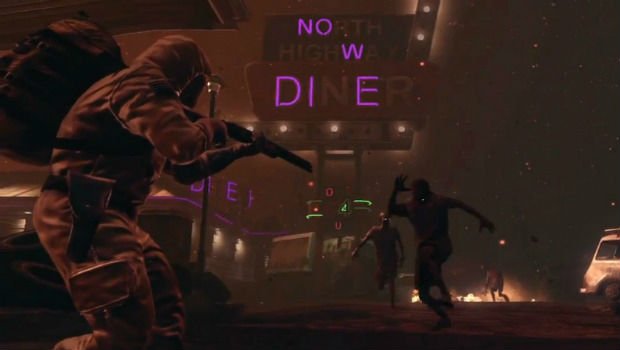 Of course, what would a Treyarch map pack be without zombies content? In Revolution, it’s a two-pronged operation: a new map, and a new mode called “Turned.” The hook for Turned Mode is pretty simple: for the first time ever, you can play as a zombie.

Sounds cool, right? Well, except it doesn’t really pan out as well as Treyarch probably hoped. Right off the bat, the mode allows for a paltry maximum of four players on one map only (Diner), which is an outright shame, and makes it feels like the content was published unfinished.

The point of Turned is to kill zombies as the one solitary human to wrack up points. As the human, it’s your job not to get eaten, and to shoot the undead. So basically, think “Infected” from the Halo series, but you constantly take turns playing a human.

It sounds neat on paper, but one of the big problems with Turned is that the zombies are just so fast that it looks goofy. I’m not even accounting for the fact that after you die as a human, you constantly respawn to the point of absurdity, only to rush like an idiot to the next kill.

Oh, and whenever the game arbitrarily ends, you get a huge “last man standing” bonus that can tip you over the edge at the last second. Horrible.

Since you can only play it on the one aforementioned map that it severely hurts the replay value of the mode. If you’re thinking of checking out Revolution just for Turned, don’t. 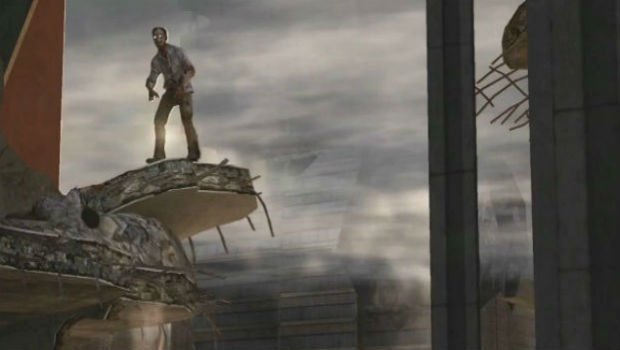 The new zombie story map, Die Rise, is a much nobler effort than Turned. Since the game only really has one story-centric map built-in (Nuketown Zombies doesn’t count), Die Rise is a welcome addition to keep the community going.

As you can probably tell, the map takes place on a ruined skyscraper, that can be incredibly hard to navigate. Unlike some of the other maps across the three Treyarch games, this one actually feels more like an apocalyptic setting than an idyllic hunting ground, which is neat.

There are a few hangups though that prevent it from being one of the better zombie maps across the three Treyarch games (like one instance where I respawned, bugged, outside of a door with no cash), but overall, I came away impressed, wanting to explore all the level’s secrets. To be clear, Die Rise is not a locale to locale giant epic quest like TranZit — it’s more inline with the original Black Ops‘ self contained stories.

All in all, Revolution is not the best way to start off one of the best selling games of all time’s $50 Season Pass. Although I don’t feel like I would have wasted my cash outright, I do feel a little disappointed that there wasn’t more bang for your buck here.

When Activision first made the decision to sell $15 map packs, despite the initial fan outcry, business was good because people just wanted more Call of Duty. The original Black Ops killed it in terms of quality map packs, including the well designed initial offering, First Strike.

But now, a little more effort is needed to satisfy the masses. Here’s hoping the rest of the season delivers.