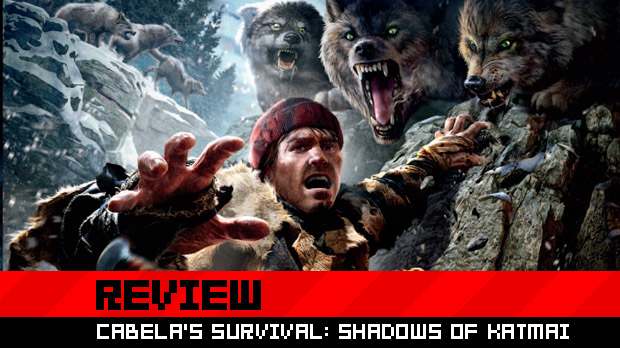 Not to be outdone by the harsh competition in the hunting game genre, Cabela’s has gone the way of the narratively driven videogame with Cabela’s Survival: Shadows of Katmai, supported by perhaps the greatest box art of 2011.

Nobody was expecting this to be the best game of 2011, of course, but it had all the potential of being this year’s Deadly Premonition — a campy and hilariously bad, but strangely enjoyable game. Too bad it doesn’t quite deliver.

Contrary to the other Cabela’s games with their first-person hunting mechanics, Shadows of Katmai takes the third-person action adventure approach à la Uncharted. It supports the Top Shot Elite gun peripheral that you can buy with it in a bundle, but it works fine with a controller even if PlayStation Move and Wii controls are perhaps the best alternative to the gun.

The Cabela’s games have always had that weirdly alien and intriguing ridiculousness factor to them if you are an outsider to the whole NRA/hunting theme, so it stands to reason that turning it into an Uncharted clone format would work great as long as the player can overlook the obvious and glaring faults that are so commonly found in a budget title.

It all starts rather promising. While flying a small plane caught in a storm over the snowy Alaskan wilderness, you’ll be exposed to dialogue like “We’ve lost engine power!” ‘Is that bad?’ “….Seriously?” followed by a crash. The first time you get to shoot something, you are instructed to pick up a flare gun and shoot flares at hungry wolves. The moment you find a bolt-action rifle, your character says: “Thank God for the second amendment.” Before long you encounter a bear, who breaks off a tree and starts assaulting you with it. It’s pretty amazing.

Whether the comedy is on purpose or not — and I laughed more in the opening hour of Shadows of Katmai than in any other game this year — it never continues this trend of providing hilarity to what is ultimately a very mediocre game. In the true Uncharted fashion, you’ll climb ledges and jump laughably large distances and you’ll run around shooting animals with various guns. The targeting reticule is very sensitive, although you get the hang of the controls soon enough. An optional ‘Focus Shot’ drains a meter and can be used to zoom in and shoot an animal’s vital organs in slow motion.

Platforming is a pretty dull affair, with some recycling of areas turning the supposed ‘adventure’ into a snore of going through the motions. Because the camera is fixed most of the time, it’s hard to steer away from the route that the game so blatantly insists you take and there is hardly ever any reward for exploring off the beaten path. Shadows of Katmai ends up guiding you through arena areas, where you are assaulted by wolves or bears and where you run around and dodge in circles, shooting at animals or bashing their heads in with a shovel, intertwined with mountain scaling sections where you get assaulted by deadly crows.

As mediocre as the game plays, it is arguably worse that Shadows of Katmai decides to stick with its realistic setting and story. The story allows for a great and nonsensical plot of the likes you find in SyFy original movies, but it never goes all the way to become truly campy and fun. You are supposed to find medical supplies to a remote research station that is infected by an incredibly dangerous virus, but the concept of a pandemic is never explored and all you’re supposed to care about are 18 researchers that would’ve contained the plague if they died in Alaska anyway. An odd character you meet along the way warns you of demons and Indian legends in the mountains, but the truth behind it is underwhelming to say the least.

It feels like either the developers didn’t get all the creative freedom to go nuts with the ridiculous concept of a Cabela’s action-adventure game, didn’t know that this concept is the stuff of cult hits when executed properly, or weren’t able to pull it off. With better writing, more self-referential jokes, more varied animal hunting encounters and a more ridiculous plot, Shadows of Katmai would still not have been a good game, but it would’ve been a lot more entertaining.

There is still some fun to be had with it, especially in the right setting (i.e., with a few friends and the right social lubricants). While you can blast through the story mode in under four hours — even on the Hard difficulty setting — you can provide some alcohol-fueled humor yourselves where the game fails to do so, as it offers plenty of ridiculous settings for comedy voice-over.

Aside from the story mode, there are the more traditional Cabela’s shooting galleries in which you try to eradicate entire species armed with a shotgun and semi-automatic rifle, while making your way through a handful of levels in first-person. However, these are not as good or as fun as the ones found in other Cabela’s games. ‘Trek’ sees you run and climb through a level on rails, trying to shoot as many animals as you can, while ‘Survival’ is a lot harder and requires you to survive the same level for as long as possible. Both modes spawn ‘perks’ (e.g., a 2x multiplier, rapid fire, or slow-motion) when killing animals, which can be activated for higher scores and better chances of survival. ‘Quick Draw’ on the other hand rewards you with weapon upgrades as you keep slaughtering animals until you max out your weapon and win the event.

All three modes can be challenging to perfect, but ‘Survival’ in particular can be a nightmare to get a gold medal in due to the sensitive controls — miss at the wrong time and you’ll need a reload to take down a bear. These shooting galleries are a fun enough distraction with co-op, but they are not strong enough to support the lacking story mode unless you are intent on getting gold medals in everything. If these shooting gallery of mini-games are what you play Cabela’s games for, you’re better off getting one of the older titles in the bargain bin.

The idea behind Cabela’s Survival is one that could be great, in time, if Activision will allow it to become the so-bad-it’s-good kind of series that would turn it into a top-of-the-list budget game for birthday gifts. Shadows of Katmai tries to be too serious with its approach and ends up becoming one of those horror movies that isn’t good or bad enough to recommend.

The one thing that it so desperately needs — entertainment value — is sorely lacking in areas where it shouldn’t, ultimately dragging the title down to the pit of forgotten titles. In the end, Cabela’s Survival: Shadows of Katmai is simply not good enough as a game or as a piece of drunken entertainment to reach the cult status it so desperately calls for.