The Burnout franchise is best known for its insane speeds and awesome crashes, so when a downloadable title that would center on its Crash mode was announced a while back, it made enough people curious as to what it would be. When Burnout Crash! was unveiled to essentially be a top-down physics puzzle game with Kinect support, a lot of that initial  interest deflated a bit, to say the least.

However, I was pleasantly surprised by the amount of ridiculousness, addictiveness, and sheer fun Criterion was able to fit into their new game. 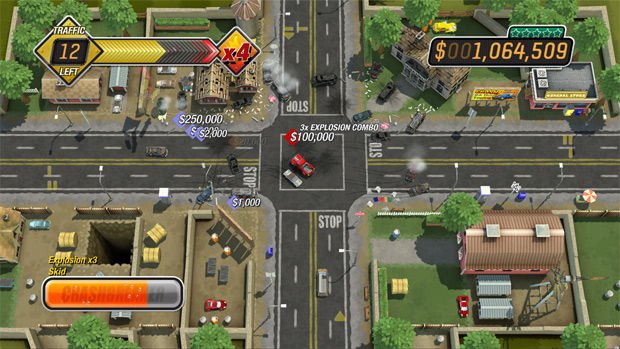 To enjoy Burnout Crash!, it’s best if you forget everything you know about the franchise except for Crashbreakers. It looks nothing like Burnout Paradise, plays nothing like any other game in the series, and besides a few familiar streets and the Crashbreaker name, it could’ve been titled anything and would’ve been the exact same game.

Half of the effort here is accepting Burnout Crash! for the puzzle game it is, and thankfully, the other half involves just having fun. With your vehicle of choice, you start barreling down a path towards an intersection where cars periodically appear from all directions. The goal is simple: make all cars crash without letting any of them escape, and try to score as many points as possible by destroying everything you can in the most effective way. 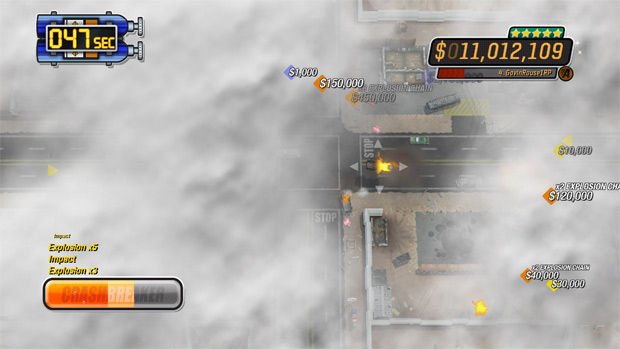 After hitting the first car in a level, you activate your continuously regenerating Crashbreaker to try and catch other cars in your explosion, or by exploding a wreck directly into them for a skillshot. Then you do the same thing on the opposite side of the road, hopefully resulting in a bunch of cars (and preferably, buses) piled up at intersections, which makes every approaching vehicle crash somewhere without requiring you to manually wreck them yourself.

So far this could’ve described the Crash Mode from Burnout 3 for the most part, but Burnout Crash! adds some ridiculous stuff to revel in its arcade destination. Crash enough cars in the game’s standard Road Trip mode, and different Features will take place. These include a sinkhole that eats traffic for points, a truck that will fire a “traffic-seeking missile” when exploded, an ice cream truck that freezes all traffic solid, a magnet modifier that attracts all traffic to your car so you can wreak havoc, and a thunderstorm that adds bonus lightning strikes to any car you explode. 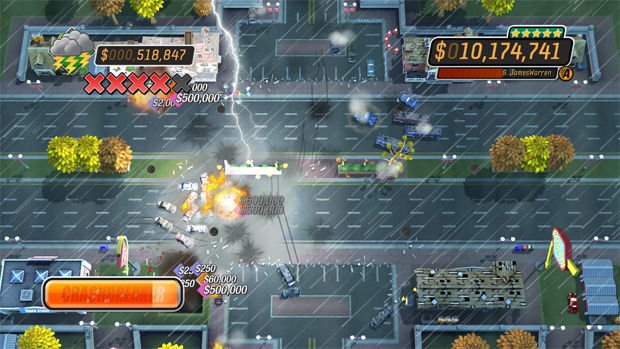 You’ll go through a few of these predetermined events, some of which will yield negative effects like “Bad Cops” who will try to bust you, until you finally reach the Super Feature — a level-ending disaster that will clear up anything you left standing, provided you didn’t let too many cars escape. Such catastrophies include an asteroid strike, a tidal wave with a ship riding it that gets eaten by a shark with a propeller, and a plane crash.

These Features and Super Features can be amazingly fun at first, although they do lose some of their novelty after you’ve seen them announced with a slightly annoying voice-over for the 50th time. Still, they add to all the craziness, and if you don’t have a smile on your face during the first 15 minutes you’re playing Burnout Crash!, either something is wrong with you or you are just terrible at physics puzzle games.

Someone at Criterion or EA’s marketing division must really love the ’80s as well, because hits from that period pop up all over the game. Hit the gold car, and you’ll hear Spandau Ballet’s “Gold!,” whereas the thunderstorm Feature makes your surround set blast “It’s Raining Men” to all your friends, regardless of their sexual preference. It doesn’t make that much sense in a game, but somehow it works. I’ll say this, though, you’ll probably enjoy it more if you are a child of the ’80s or ’90s.

Play Burnout Crash! for a few hours, however, and you might feel some frustration nibbling away at the fun here and there. 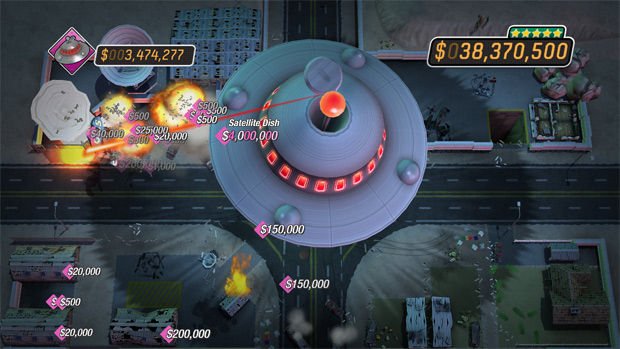 Part of this frustration comes from the game’s primary mode: Road Trip. This is the regular crash mode with all the bells and whistles, but it’s all too easy to lose by letting five cars slip through your exploding fingers of doom. If you carefully piled up a mess of wrecks at key intersections, they might explode after too much damage, thus clearing the path for future traffic to get away unscathed. This tends to come exactly at the moments when you are feeling safe, Crashbreaking your way through buildings and bonus vehicles hidden away in the level.

Then again, this is something that, while frustrating, is a matter of skill, patience, and retries. Less skill-oriented is Rush Hour mode, where you have to pile up as many cars as possible to go boom in a massive explosion when a 90-second timer hits zero. In this mode, a pizza truck can be destroyed for a “Pizza of Fortune” — a pizza wheel with positive and negative bonuses — which can give you a coveted 3x multiplier to score ridiculously big, or something that will ruin your run if you’re not careful. Because Burnout Crash! is a game all about scoring, the randomness of the Pizza of Fortune is a bit odd. To compete with your friends, you basically have to become good at a level and be lucky enough to get the right bonuses.

The game’s Pile Up mode feels a bit like a throwaway inclusion. While fun, this mode asks you to let no car escape lest an Inferno multiplier drop to zero and — like the Rush Hour mode — it wants you to work out your crashes for the end of the level, indicated by a number of total crashes. Hit this number, and you’ll have a few seconds to set something on fire during an “Inferno” section. It doesn’t matter what; just set something on fire, anything at all. In practice, you can end up with a nice pile of wrecks, have them explode by accident just before the Inferno section hits, and watch as your Crashbreaker bar regenerates just too slowly to hit anything before the time is up. 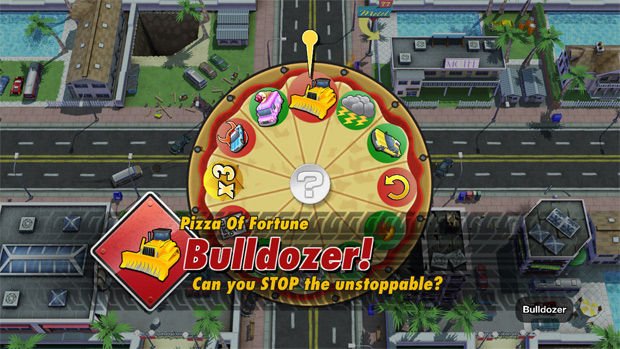 While these frustrations exist, they are secondary to the fun you can have with Burnout Crash! if you are willing to overlook them. As the game comes with EA’s Autolog for things like score comparisons and sending challenges to your friends, you’re likely going to play the three modes across 18 levels over and over anyway. Replaying a few minutes here and there just because you were unlucky is not going to be a dealbreaker.

It is, however, really odd that the game marks every in-game retry as an attempt. Score hunters will retry at the slightest mistake within the first 10 seconds, but the game makes you look as if you retried an entire crash mode dozens of times to get a paltry score. You can also easily lose track of where your car flew off to, especially after you unlock and use some of the lighter cars.

Finally there’s the Kinect functionality, which is only useful for the local multiplayer mode or to make a fool of yourself while your child looks at you and judges you. You don’t need it, and you’re not going to want to use it unless you desperately need something other than Dance Central to entertain those friends who question the soundness of your peripheral-purchasing behavior. (But it’s not going to convince them.)

If you can embrace Burnout Crash!‘s design with open arms and wave the few annoyances away in the scope of a thousand retries, submit to the Autolog addiction with a bunch of friends, and devote yourself to hours upon hours of fighting for that high score, I can’t recommend it enough. Still, Burnout Crash! can be entirely different things to different types of players. For those who are in it for the high scores and who have “Start, down, A, A” motions for restarting a race hardwired in their brain, it is pure arcade bliss. Those who prefer racing to physics-based puzzling with crashing cars might feel disappointed or let down by the Burnout name, but that’s what demos are for.