Burn it All is quite a departure from Pastagames’ previous game Pix’n Love Rush. Rather than creating another retro-themed platformer, the developer turned towards a creative take on tackling a puzzle game.

And creative is really the key word here, because Burn it All ranks up there with the most creativily designed puzzle games on the App Store.

Burn it All is all about — you never would’ve guessed it — burning things. All of it. Or well, all of the rope or wood material in a level that has to be burned away with cute little flames before a timer runs out. Easier said than done, because three different types of rope burn at a different pace.

When faster-burning pieces of rope remain inaccessible until you burn away various tougher kinds of rope, you start to understand how the puzzle elements come into play. It’s a race against the clock that requires some planning and thinking ahead, but without some finger dexterity your plans won’t result in any scores worth writing home about.

You control one of three different types of flames at a time, each with its own characteristics, to start fires that slowly consume whatever you touched. The red flame can only burn the tip of a rope and gets extinguished after passing its flame, returning to a volcano at the bottom of the screen to regenerate.

The blue flame can burn any surface it touches, but regerates more slowly after starting a fire. Finally, the green flame is like the blue flame but it can burn through multiple things in a row before it need to regenerate. It also takes the most time to regenerate, so look at it as a rapid fire flame with a slow reload. 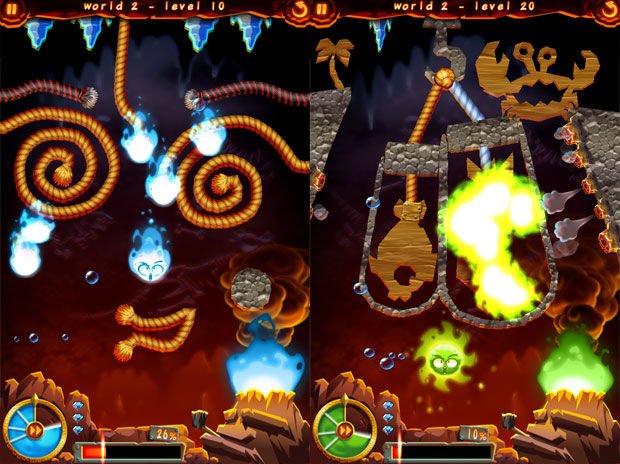 The game starts out relatively easy with only the red flame and increasingly complex mazes of rope at your disposal, but things become ever more complex as you progress.

After being introduced to all three flames and level features such as water drops that extinguish your flame, bats that fly around and need to be burned, gas vents that take your fire and blast it to whatever is behind you, and bombs that destroy a large chunk of scenery, everything starts coming together in a crazy mix.

Some of the later levels involve time travel, which is where you really have to plan your burning sequences. You start with one flame to burn what you can until the timer runs out, and then start from the start of the level with another colored flame. But at the same time a “ghost” of your actions with the previous flame starts burning away as well.

When these “time loop” levels have all three flames working together in a crazy parallel and serial fashion, forcing you to think about all of the game’s elements at once, it really becomes a joy to play around and experiment with different approaches.

While the gameplay itself is fresh, accessible and easy to grasp, the level designs are just as creative. Ropes form meandering mazes and designs of creatures and objects. Burnable wooden objects sometimes make you feel like you are vandalizing a child’s week-long art class project as you torch them. And occasionally burning away objects (wooden letters reading I L O V E U) can reveal hidden text popups in the levels (I love you too). 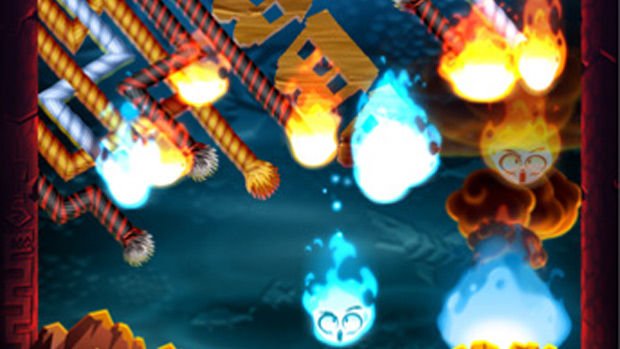 Moving your flames around is effortless as you simply drag them around with your finger, but you can touch anywhere on the screen to start moving a flame; not seeing what is below your finger is no problem here. You’ll be doing a lot of the latter when you try to evade water drops that extinguish your red and blue flames instantly.

With 100 diverse and creatively designed levels, and a very hard goal of reaching the maximum of three “gems” for passing a level under the set time, you’ll be required to both scratch your head and become good at moving your flames for quite some time.

A future chapter is still locked and the game’s story doesn’t really end when you finish it, which is kind of a shame. Then again, this is a puzzle type of game where the story is only there to frame the game’s aestethics and progression. Some more of the time loop levels that tie all the mechanics together would’ve been nice though, so here’s to hoping that Pastagames will release more of those in the future.

I can’t stress enough how hard some levels are if you take the slow and cautious approach. While it’s hardly a bad thing, and you can skip levels if you want, just make sure that your children won’t throw your device on the floor if they can’t pass one of the harder levels. Once you get the hang of evading water drops and saving time by moving flames around really quickly and accurately, it stops being much of a problem. But it might take you quite some time to get good at it.

Burn it All is a true gem of a game that shows just how you can mix creativity across many levels of mobile game design. Given how hard it can be to complete every level as fast as the game wants you to, prepare yourself to keep playing this on and off for quite some hours.