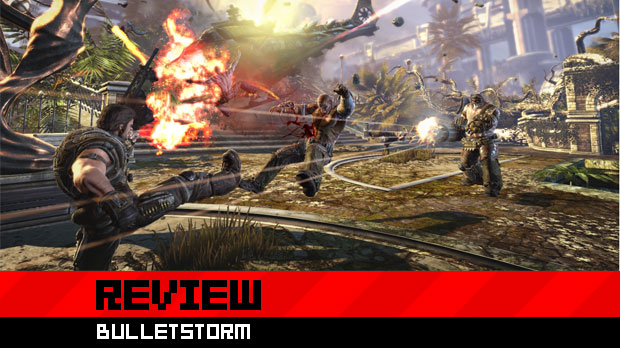 You can’t really play Bulletstorm wrong per se, but it’s a game in which “the point” is fairly easy to miss.

Sure, you can run through its eight-hour campaign, relying on your default military assault rifle to blast through inexhaustible crowds of the game’s punk mutants and bloodthirsty soldiers. As your typical first-person shooting gallery, Bulletstorm holds its own, with a wealth of scripted “oh, shit!” moments and solid base mechanics that just feel right. So if you want to dash from firefight to firefight, mindlessly unloading clips at anything that moves, go for it. You’ll probably have a blast.

But playing Bulletstorm like a standard first-person shooter would be a disservice to yourself, and the fastest way to miss the point. If every kill doesn’t feel like an entirely new, heart-pounding experience, you’re doing it wrong. Because beneath Bulletstorm‘s potty-mouthed, gore-drenched exterior, People Can Fly and Epic Games have delivered a remarkably sophisticated and original shooter.

First-person Shooter 101: you get guns, you shoot the guns at moving targets, the moving targets stop moving and then fall down. You also have a melee attack, so if you get close enough, you can hit your targets and they fall over. Repeat. Bells and whistles aside, most developers don’t stray too far from this fundamental formula. To be fair, to this day — almost 20 years after id Software shipped Wolfenstein 3D — those basics are still fun. But right off the bat, Bulletstorm expands that vocabulary with three basic expressions: an electric leash, a slide, and one of the biggest boots in first-person gaming.

By simply adding these three elements, Bulletstorm offers up more variety than most first-person shooters bother to even try to provide. Using the electric whip, you can pull enemies toward you in slow motion; slamming it down on the ground can cause area damage, sending enemies and objects flying toward the sky. Your boot, a close-range melee attack, sends enemies or objects flying backward through the air. With the simple double-tap of a button, you’ll briskly slide across the ground; nailing an enemy while doing so will trip them up, easily upending them.

On their own, these abilities already give Bulletstorm a decidedly different feel from from other shooters. But really, they’re the key ingredients for what the game is really all about: stylish, exaggerated ways to murder for points, affectionately known as “Skillshots.” Slide into an enemy, target their body in the air and end their life before they land for a “Bullet Slide” kill. Score points. Kick an enemy backward, sending them through the air in slow motion, letting you target and shatter their skull. Earn the “Headshot” and the “Bullet Kick” Skillshots; score points.

With Bulletstorm, this is just the tip of the iceberg; those are your “Skillshot Training Wheels,” if you will. They’re also the most basic examples of Skillshots, and therefore they’re really easy for an inexperienced player to rely on. It’s simple to let the “slide/kick/leash and then shoot” skills dominate your Bulletstorm experience, but it’s not advised — repeating the same Skillshots will decrease the score output. Since points earned can be used throughout your game to purchase and upgrade weapons (as well as buy ammunition), you’re encouraged to constantly expand your horizons.

With over 100 different single-player Skillshots, you’re going to want to slow things down and take time to experiment. Fortunately, the game has a Skillshot list that is accessible at any time, showing you which ones you’ve nailed and which ones you’ve yet to complete. It became an almost compulsive habit checking in on the kill catalog as I played, simply to see what new and unique Skillshots I had yet to execute. As new weapons and upgrades are purchased, even more types of kills become available, keeping things fresh even a few hours in.

Eight weapons are available at your disposal, each with an alternate fire and distinct Skillshots. You’ll need the Screamer pistol’s rocket-propelled flare to send an airborne enemy into the stratosphere to explode like a firework, for example. By shooting it up his ass, of course. Katy Perry would be proud.

Bulletstorm also features environment- and boss-based kills spread throughout the campaign. It is a bit disappointing that you can count these environmental kills on both hands: there’s a cactus, a piranha plant creature, and some toxic spores, among a few others that repeat across the game’s seven chapters. It would have been nice if there were a few more surprises thrown in as you progressed. Even still, with all the single-player Skillshots, it’s unlikely any player will discover or perform them all during their first playthrough of the campaign.

There’s been a lot of talk about the game’s potty-mouthed cast, and Bulletstorm certainly doesn’t disappoint on that front. Writer Rick Remender effortlessly strings together profanities in ways that are as imaginative as the game’s Skillshot index. The narrative itself isn’t anything to shout about, following the story of washed-up mercenary-turned-space-pirate Grayson Hunt on a quest for redemption with a shot of revenge. Considering his work on his Fear Agent comic series, Remender is right in his range with the whole alcoholic space adventurer shtick. He manages to support the game’s real star — its out-of-control gunplay — with a story that entertains, despite some pulp clichés and conspicuous plot twists.

Folks concerned about the game’s length can look towards its score-based single-player “Echoes” mode, and the online cooperative multiplayer “Anarchy” stages.

If you’ve hunkered down with the Bulletstorm demo, you’re familiar with “Echoes,” which takes slices of the game’s campaign and packages them into a mini score-based affair. Supported by leaderboards, this is really where attention to the game’s Skillshots comes into play. With the areas broken down into bite-sized chunks, it’s all about figuring out the best ways to maximize your scores through the use of various weapons, Skillshots, and the environment.

Echoes is as much about memorization of enemy placement as it is about twitch-based first-person shooter skill. If you’re all for score-based competition, constantly eyeing leaderboards, this is the mode for you. With some players still managing to eke out points from the game’s short, one-area demo weeks after its release, it’s not hard to imagine how much playtime one might get out of the 20 on-disc “Echoes” levels.

Bulletstorm’s online co-op mode, “Anarchy,” is Epic and People Can Fly’s take on what’s typically referred to as a “Horde Mode.” Here, up to four players team up to take on 20 waves of increasingly difficult enemies, the key being not just to survive, but to hit a target score in order to advance. “Anarchy” is all about communication, as the mode introduces cooperative Team Skillshots. While all of the game’s single-player Skillshots are accounted for (and you’ll get a nice chunk of points for performing them), there are plenty of kills specific to the co-op mode. Fancy pulling an enemy apart with an electric leash? Teaming up with a friend in “Anarchy” is the only place to do it. “Anarchy” is best enjoyed with pals who have headsets; playing it with voiceless nobodies can be a frustrating experience, making the game’s “Quick Match” option somewhat pointless.

Not surprisingly, killing the ever-loving shit out of enemies with your buddies online in Bulletstorm is delightful, with a few caveats. For starters, each “Anarchy” map is played across 20 waves. That’s a lot, and when you factor in the reality that most teams will have to restart a wave or five due to failure along the way, completing a full “Anarchy” round can be a remarkable time commitment.

All 20 waves are also played across one of the game’s six “Anarchy” maps, which means you’ll sometimes be spending upwards of two hours in a single tiny area. The small size of the arenas is disappointing, but also understandable — you’re going to want to stick close to your teammates to get the most scores out of team kills, anyhow. But it seems as if the potential monotony of 20 murderous waves could have been relieved a bit if the maps simply cycled as you progressed.

Regardless, there’s a lot of fun to be had in “Anarchy” with what you’re given. Along with character customization and leveling based on earned experience, you’re looking at a dozen hours of senseless-but-enjoyable bloodletting.

Bulletstorm is a surprisingly vibrant game, with rich hues of oranges, blues, and yellows throughout the game’s world. And, of course, a lot of crimson, if you’re doing your job right. It’s important to note the game’s use of color, because it’s yet another way Bulletstorm goes against the grain. While the game doesn’t shy away from browns and greens, staples of most first-person shooters on the market, it fortunately doesn’t lean on them too heavily.

While some muddy textures and questionable character design choices muck things up a bit, there are certainly some spectacular-looking moments. In particular, the sun-drenched skyline of the game’s exotic battleground of Stygia (highlighted on the title screen) is jaw-dropping from the proper angles.

The ink on the blueprints for the standard first-person shooter experience has dried. Developers seem to have mastered the art of delivering a solid and fun triple-A shooter experience, to the point where it almost seems effortless. It’s always about “bigger” and “more,” with little else to set games apart.

With Bulletstorm, Epic and People Can Fly not only succeed at delivering the “bigger” and the “more,” but bring with it a gameplay slant that makes it a one-of-a-kind experience. Yes, it may be brazenly outrageous and juvenile; be prepared to check your “Serious Business Adult” card at the door. But lurking underneath is a seriously fun, novel take on the first-person shooter genre that shouldn’t be ignored. Just make sure you don’t “play it wrong.”