When we bought into the promise of next-generation gaming in 2013 with the launch of the PS4 and Xbox One, I doubt any of us thought we’d be playing remasters of last-generation games four years later. Here we are, though, with yet another remaster of a game that failed to sell all that well upon its initial release.

Don’t get me wrong, I think Bulletstorm was treated poorly. The game was (and still is) a great example of how to take contrived elements of triple-A gaming (like scripted events and QTEs) and breathe life into them by turning the absurdity up to 11. Full Clip Edition, though, doesn’t really justify its $60 price tag, especially with how limited the conversion is. 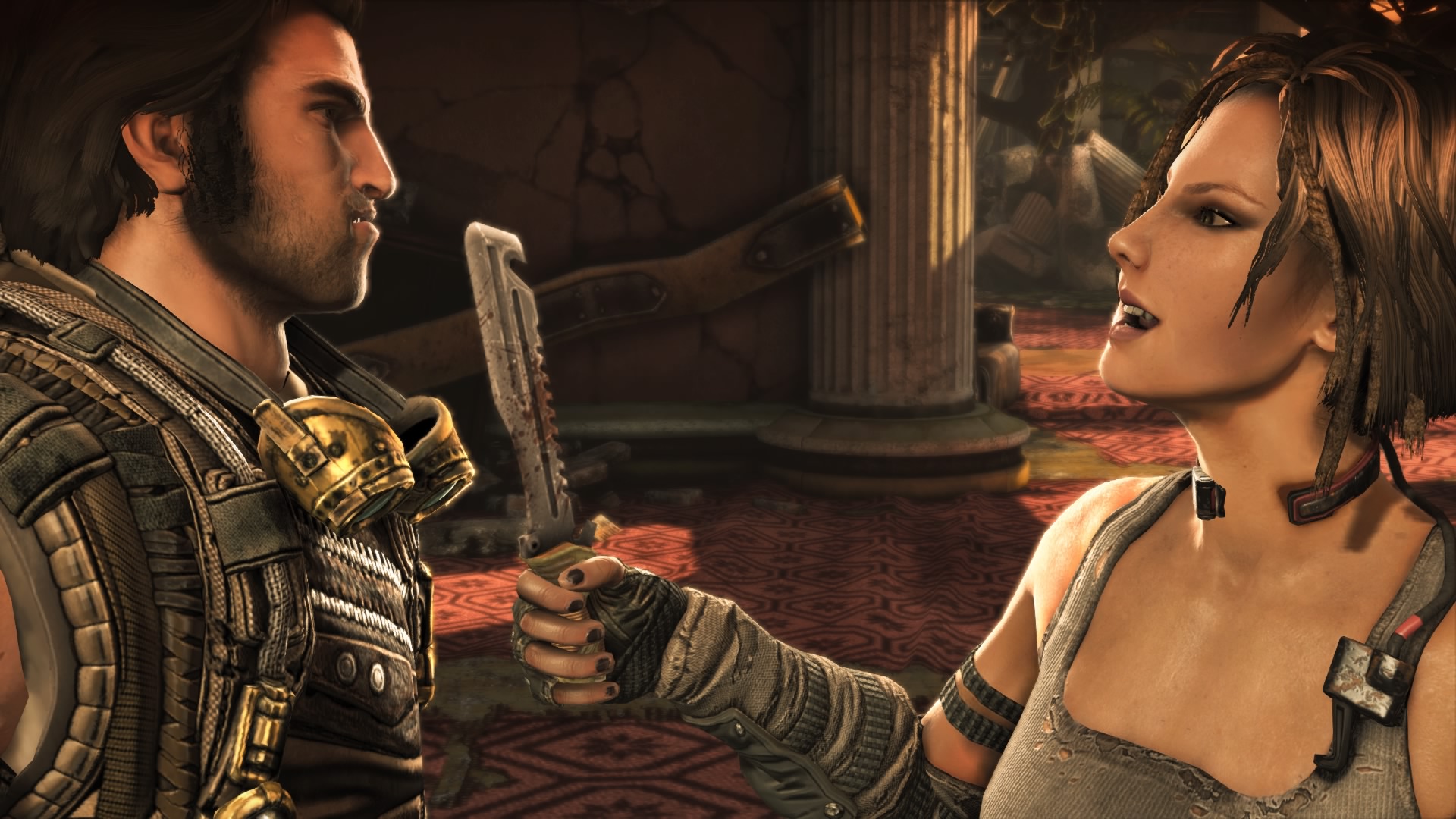 Fans of Bulletstorm will tell you that the best thing about the game is its sense of humor. Nothing is taken too seriously and it likes to play everything with a juvenile glee to counterbalance the ridiculous scenarios you’ll be going through. While that is true for the first half of the campaign, the game slowly morphs into a serious drama about redemption and bonding that feels tonally out of place.

Still, even with story mishaps and some basically on-rails moments, Bulletstorm puts a bigger emphasis on its gunplay and all the creative ways you can murder your foes. Regardless of me rolling my eyes at the stupid jokes or grinding my teeth at how checkpoints are poorly handled (dialog will replay each time you die!), the real joy is in how People Can Fly managed to craft a fully-fledged space opera around a score attack arcade game.

You don’t just rack up a useless high score, either; all of your skillshots (as the game calls them) act as currency to upgrade your weapons and unlock even more ridiculous abilities. A shooter is nothing without an interesting arsenal and Bulletstorm really delivers on that front. About the only weapon I don’t personally enjoy much is the sniper rifle, but mainly because I’ve always been a horrible shot with snipers in other first-person shooters.

Each weapon provides a unique opportunity for death dealing. Your standard (and ever present) assault rifle has a generic primary mode, but its secondary option shoots a blast that vaporizes any target unlucky enough to be in its radius. You eventually unlock a grenade launcher that has bouncing bombs and a drill weapon that shoots a pressurized spear through people, skewering them on impact.

The AI for your foes isn’t the brightest around, but I don’t believe that was the purpose. Even on “Very Hard” difficulty, Bulletstorm is a relatively easy game. Just blitzing through the campaign is missing the entire point of its structure, though. While levels are linear to a fault, the whole idea is that you’re scanning each environment for brutal methods of dispatching enemies.

You can kick people into fences, spikes, man-eating plants, or electrical currents and watch as their body parts and bodily fluids rain across the sky. With your leash weapon, you can whip people directly to you, slowing down their momentum due to some unexplained science, to setup the perfect kill (which, for me, is often kicking them off a building). That is where the replayability comes in. 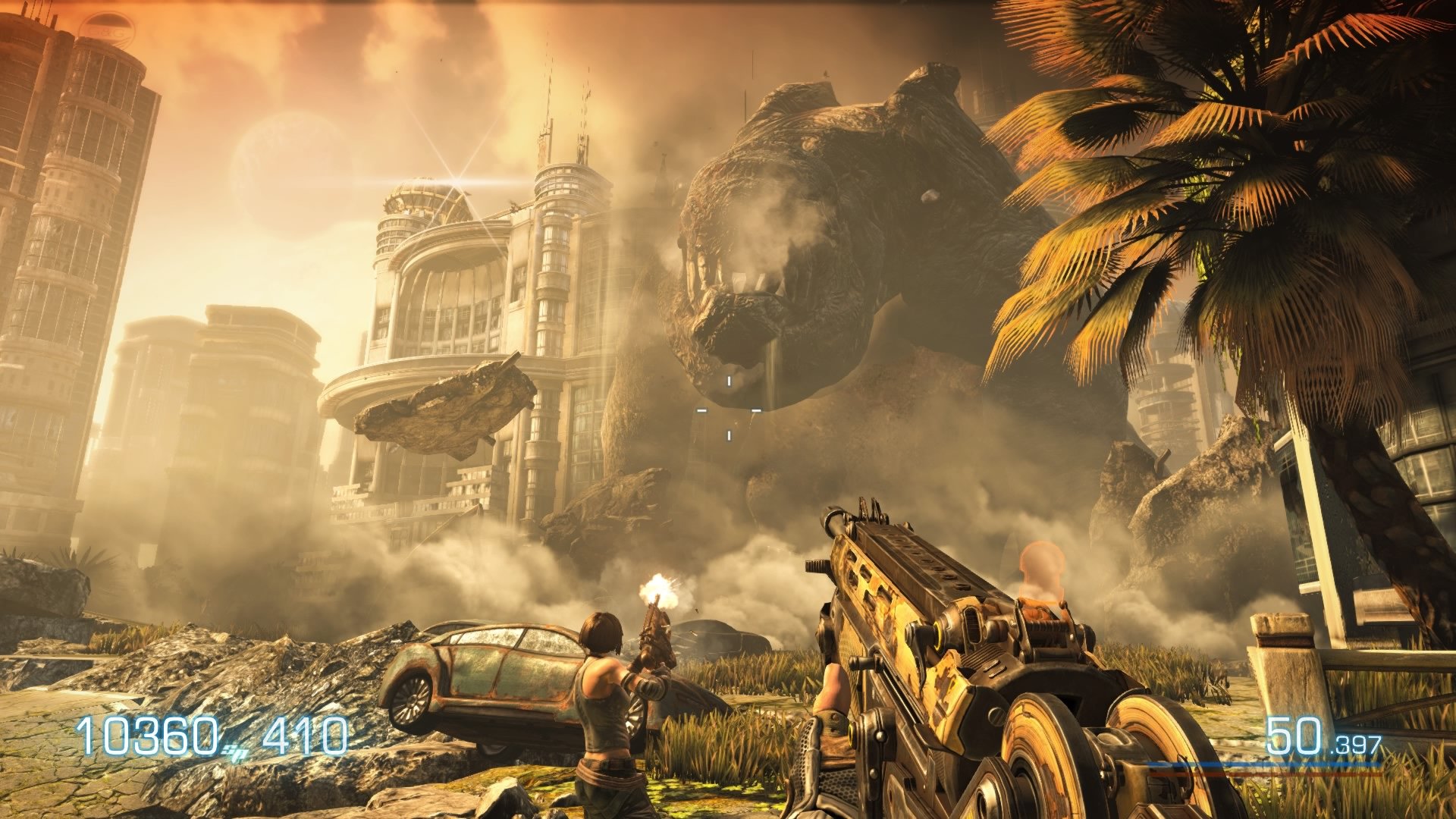 Towards the end, the main campaign begins to bog itself down too much with overly serious dialog, poor scripting, and obvious twists. The characters are archetypes from revenge films and the big villain is overly vulgar for even this game. He also appears really late into the campaign and is suddenly supposed to be this huge threat, despite going out like a chump.

Even the level design starts to get less creative with fewer opportunities to uniquely murder foes. I’m also not a fan of the scripted skillshots that are basically endcaps to interactive cutscenes. If I’m supposed to kill a boss with one specific move, that isn’t really a skillshot. Thankfully, you can completely skip the main story and not miss out on the main point of Bulletstorm.

The side mode, Echoes, takes some of the more memorable set-piece moments and just lets you fly through them with most guns available. It eschews cutscences entirely and even removes QTEs, making for a much smoother experience. Echoes grades your performance in each level based on how many skillshots you perform and how fast you finish each section. Once done, you’re given a star rating out of a possible three and are shipped off to the next level. The intensity never ramps down and you don’t have to deal with constant interruptions to the killing. 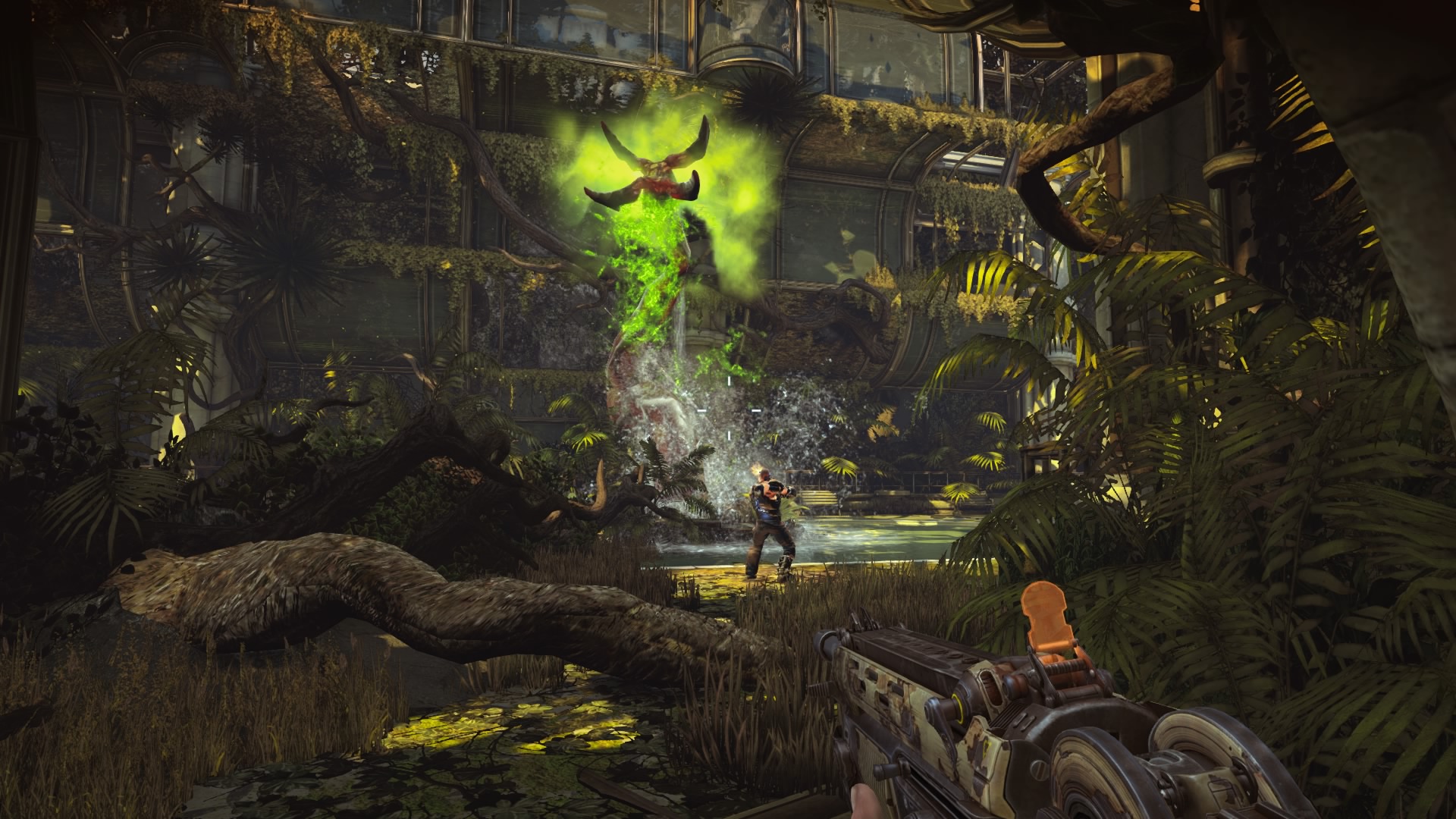 Since Full Clip Edition packs in the two DLC packs from the original release, you also get Ultimate Echoes mode which gives specific objectives for each Echoes map. While this isn’t as fun as being given the keys to a monster truck (like standard Echoes), it does provide yet another way to experience the gunplay that Bulletstorm nails so well.

In addition to that, upon beating the remaster, you’ll now have Overkill Mode for the campaign. This skips all character progression and lets you carry the full arsenal from the very beginning. If you manage to finish out the skillshot checklist, you’ll even earn unlimited ammo for each gun, providing basically a “cheat” mode for the game. If nothing else, it certainly can be nice for blowing off steam.

As for the graphical upgrade that Full Clip Edition is being touted for, I can’t say I’m that impressed. I originally experienced this game on PC back in 2012, so my memories are of a full 60 frames-per-second and a native 1080p presentation. While Full Clip Edition mostly nails that, it doesn’t look much different texture-wise. 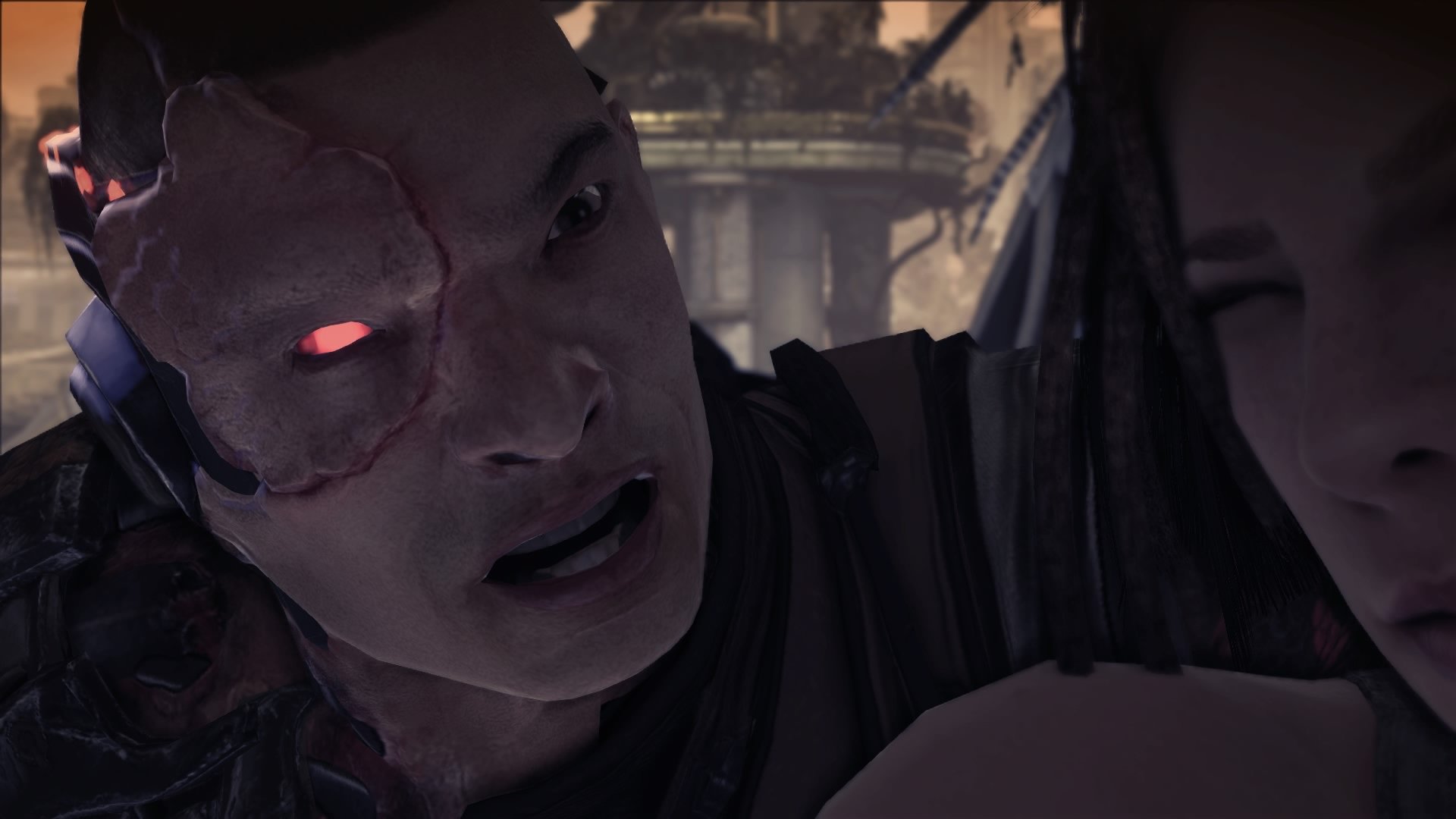 I suppose certain character models have been cleaned up and the audio is presented in 7.1 (if you have support for that), but the PS4 release features some slowdown and I’ve noticed instances where characters will glitch through walls, where my character got stuck in place or fell through the environment, and even some weird issue with character models stretching across level geometry.

There is also an odd issue where cutscene audio isn’t normalized with regular game audio. This leads to moments where a set-piece might have somewhat soft audio and the following cutscene will blow your walls down. I had to constantly fiddle with my volume levels, which is very distracting and annoying.

In a disappointing turn of events, Gearbox didn’t provide early access to the Duke Nukem pre-order bonus for review purposes. I was actually looking forward to trying that, but I can’t say whether or not it fixes any issues I had with the story or if Duke’s presence makes the game any funnier. Since it is a big selling point for this remaster, I’m a little shocked they didn’t send the code earlier. I’ll give my impressions of that add-on as soon as I can. 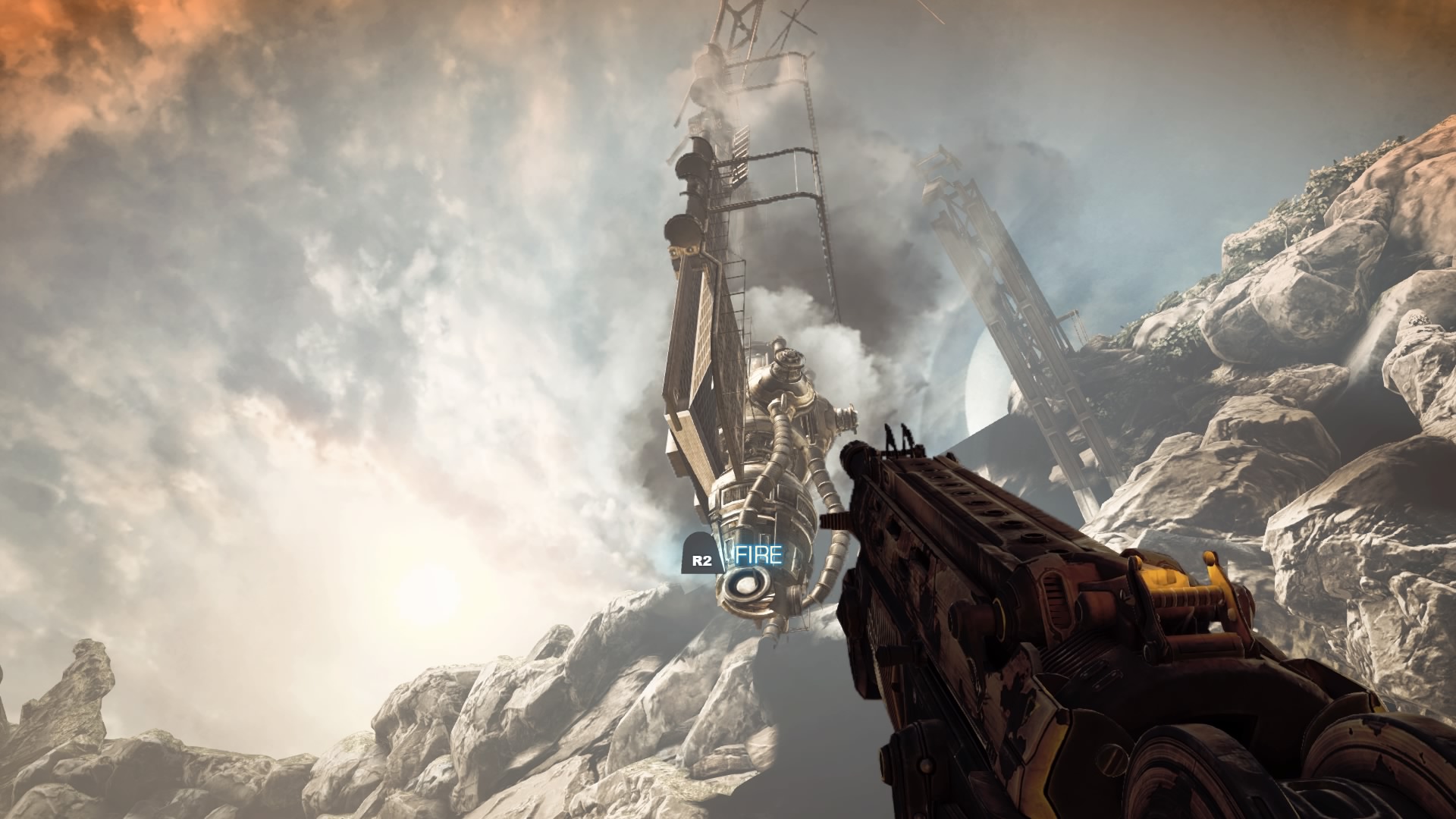 Thankfully this remaster doesn’t leave out the multiplayer from the original mode. I wasn’t able to test it out before release (since no one was playing it), but I do remember it from years ago. Anarchy is what the mode is called and it essentially amounts to a horde mode. You and up to three friends can team up and viciously murder enemies to unlock customization options and different weapons.

Anarchy isn’t the best thing around, but not ripping out the feature is a nice gesture. I can’t believe how many times we’ve seen developers invest in a multiplayer option for their campaign (BioShock 2, Assassin’s Creed Brotherhood/Revelations) only to have the remaster forego it in favor of barely updating the visuals. Even if Full Clip Edition isn’t the best upgrade around, at least it truly is the most definitive package.

Still, paying $60 for a now six-year-old game is ludicrous. There may definitely be people who never experienced this on their old consoles (or even never owned those consoles), but I don’t know that such a hefty entry fee is justified by the work done to this version. If we just had backwards compatibility on newer consoles, people who missed out on the original could have grabbed the title for under $15.

If you only ever experienced the original on consoles, though, Full Clip Edition might be more enticing. It speeds up the framerate, includes all the DLC, and even provides an insane new way to experience the campaign. Whether or not Duke adds to that is yet to be seen, but at least the main package lives up to its title.