I’ve been a big fan of shoot-em-ups ever since my mother bought me Silpheed for the Sega CD on my 13th birthday. It wasn’t my first experience with the genre — that honor goes to playing Galaga with my father at the local pizza place — but it was the one that made me fall in love with the intense, twitch gaming thrill that only shoot-em-ups can deliver.

CAVE’s shooters on the Xbox 360 reign supreme in the modern era, with Mushihimesama Futari (Bug Princess 2) being my personal favorite of the bunch. Sadly, not every shooter released is region-free, which means I’ve missed out on a bevy of classics, since this once-popular genre has become all but extinct in the West.

When CAVE announced that they were bringing their shoot-em-ups to iOS, I was somewhat hesitant. These games require precise movements to navigate screens filled with bullets and the size of an iPhone screen seems less than adequate to handle CAVE’s chaos. But Do-Don-Pachi Resurrection changed my mind. It was everything I looked for in a shoot-em-up experience. Could CAVE recapture the magic in their fourth iOS shooter release, Bug Princess? 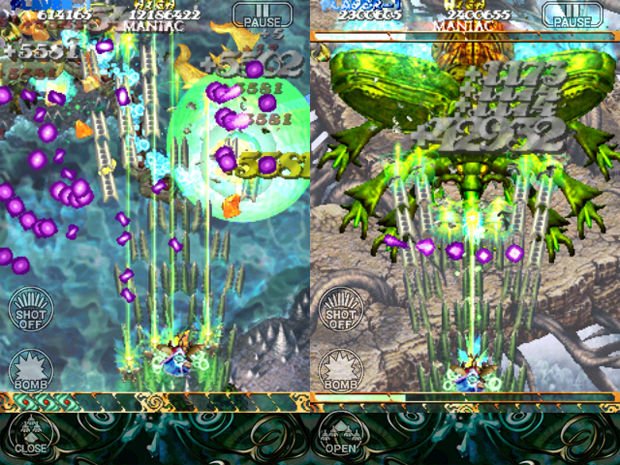 Bug Princess — known as Mushihimesama in the East — is the latest CAVE shooter to the grace the presence of iOS-enabled devices, and the predecessor to my favorite Xbox 360 shmup. It originally debuted seven years ago in Japanese arcades and then landed on PS2 a year later. Its transition to iOS appears as smooth as CAVE’s past endeavors. Granted, I don’t own the original import, so I can’t offer an exact comparison, but I’ve played a fair amount of CAVE shooters and I know this one has their classic feel down.

So what is the classic CAVE shooter feel? In terms of Bug Princess, it’s offering blissful vertical shooting action wrapped in a sleek and majestic package. What originally captivated me with the game’s sequel was its charming and well-designed fantasy world. Seeing where it all came from is just as much of an ocular treat. From giant bugs to magical forests, the art design is fantastic and holds up quite well considering its age. It’s always a pleasure to play a shoot-em-up that doesn’t contain an airplane or is set in the confines of space. There is a story behind Bug Princess for those wanting to understand the world CAVE created — one that can be accessed in the game’s handy history section — but really, it only serves to justify why a cute girl is riding a giant beetle that can shoot magic bullets out of its mouth.

The core experience of Bug Princess consists of blasting giant, hostile insects out the air while dodging everything that is sent your way. There is only one character to take to the lush forest skies, but she at least come equipped with three variable shot types: M-Power (all-around type), W-Power (wide shot), and S-Power (a concentrated head-on strike). Each weapon offers its own strengths, but honestly there isn’t really much difference in their variety at full power. When starting out, any of the three types can be selected, but when a power-up makes its way onto the screen, during the action, waiting long enough will change its type and thus change a player’s shot type.

The greatest amount of strategy comes into play with the support beetle attachments that are collected throughout. With a simple tap in the left corner, the proximity of up to four beetles can switched from an “open” to “close” arrangement. Also, depending on how long one waits to collect a beetle attachment, its tendencies will change from a trace type (following your every movement) to a formation type (imagine the Blue Angels in all their glory). I found the formation style the most useful, and depending on the situation, would switch between proximities. The open style is best used for quickly taking out large groups of enemies, while close packs a much more needed and concentrated punch for bosses. Over time, one develops a sweet rhythm from switching back and forth.

There are three modes to work through in Bug Princess, which unlock once the previous one has been completed: Original, Maniac, and Ultra. Each offers its own progressively more difficult challenges and scoring schemes, along with five difficulty settings. Original mode serves as the game’s starting point and is a great place to learn the ropes, but even on the Hell difficulty — the arcade version’s default bullet pattern layout — veterans of the genre will make short work of the five stages. 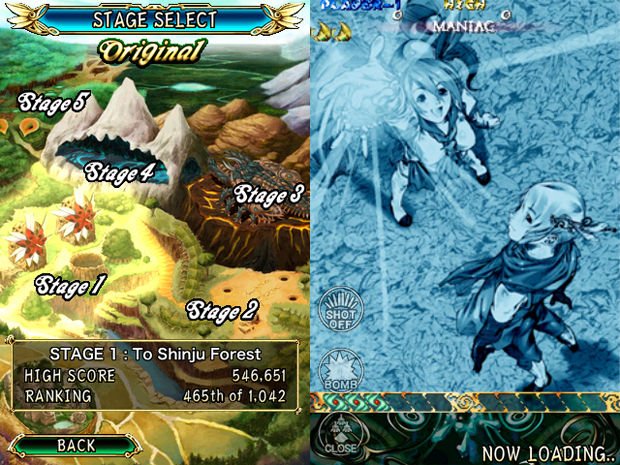 For me, Maniac Mode features the perfect balance of bullet-dodging nirvana. In Maniac Mode, the game ups the challenge considerably and also presents a fun scoring system that brings an extra layer of strategy to the game. A shot counter is added; it boosts a player’s score for consecutive enemy hits, which really tests one’s skill in both bullet dodging and enemy pattern memorization. Ultra mode is doable on the easiest setting, but only the most skilled or masochistic types will find enjoyment in playing Bug Princess’ most challenging mode at its hardest difficulty.

Regardless of the mode or difficulty, I’m still amazed at how well Bug Princess controls on a touch screen. I played the game using my iPhone 3GS and it handled the task flawlessly. The fidelity in moving swiftly from one side of the screen to tediously crawling though some of the most hellish bullet patterns later on is a testament to touch design. My only complaint comes from my thumb occasionally obscuring upward enemy spray from view — something I imagine is less of an issue on an iPad. To compensate for this, CAVE has implemented a few different screen sizes to chose from, with the smallest offering more finger space. 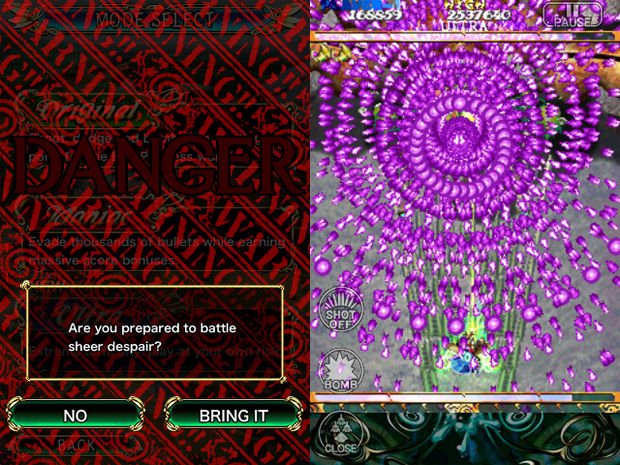 At its default settings, everything in Bug Princess is set to auto when it comes to delivering the action. Auto-fire is enabled, and bombs — which serve as a screen-clearing last line of defense — act more like a shield when a bullet connects by, detonating instantly. Strangely, taking these two actions out of a player’s hands doesn’t at all affect the skill needed to enjoy the genre. CAVE does allow players to enable a more traditional play style. But between dealing with the insane bullet patterns and organizing the tactics of the attachment beetles, there is more than enough going on to satisfy the most hardcore shoot-em-up enthusiast.

Bug Princess is another beautiful and fun CAVE shoot-em-up on the iOS platform. The music is charming, the controls are responsive, and there is enough care in this port — from translation to bonus menus — to really showcase CAVE’s love for the genre. Bug Princess is a great shoot-em-up and a great iOS game that truly captures the power of touch gaming. I’d gladly pay a ludicrous amount to import this game on my Xbox 360, but the fact that it’s roughly five bucks and goes anywhere on my phone goes is ultimately priceless.