[Disclosure: I backed the Kickstarter. A review copy was used for this verdict.]

The game formerly known as “Double Fine Adventure” has finally made its debut — or should I say, half-debut. Broken Age: Act 1 is the culmination of almost 100,000 backers, over 3.5 million dollars, and nearly two years of waiting. The project, once asking for a mere $400,000, broke Kickstarter history and subsequently forged high expectations for Tim Schafer and his team.

Broken Age follows the lives of Shay and Vella, two young teenagers yearning to escape from their predestined paths. Although the description sounds coming-of-age generic, the stories and puzzles are anything but. Broken Age follows its point-and-click adventure predecessors while forging its own path — and what a compelling path it is. 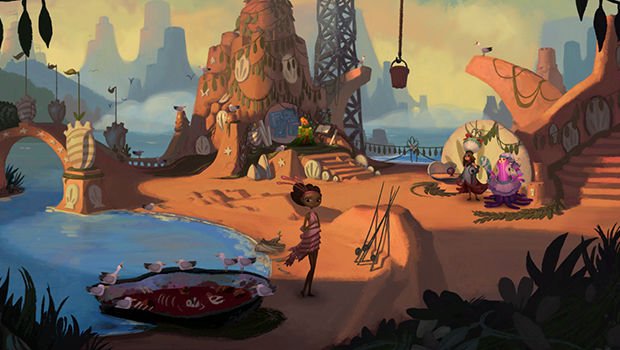 Shay has lived his entire existence on a spaceship designed for toddlers. Day after day he’s coddled by the ship’s “mother,” an overbearingly saccharine computer unwilling to allow him to take care of himself. Mother babies Shay in every way, including knitting sentient pals to keep him company and forcing him to take his daily nutrition paste. Shay’s unending routine consists of completing childlike “missions,” like saving his yarn pals from an ice cream avalanche or a hug-attack, which are designed to keep him occupied throughout his existence. Struggling with his confined life, Shay manages to discover a secret part of the ship and quickly experiences what it means to have real responsibility.

Vella wakes up on the last day of her life, preparing to uphold the long-standing tradition of being eaten by a giant abomination named Mog Chothra to keep her village safe. A town that once prided itself on raising fierce monster-fighting warriors, Sugar Bunting now concedes to offering up its finest maidens to Mog Chothra during what they call the “Maiden’s Feast.” While the other maidens are excited to be considered potential meals, Vella can’t help but wonder if there’s another way out. She rises up to fight against her supposed destiny of becoming a delectable treat for Mog Chothra and breaks free to search for a way to defeat the monster before it consumes her town. 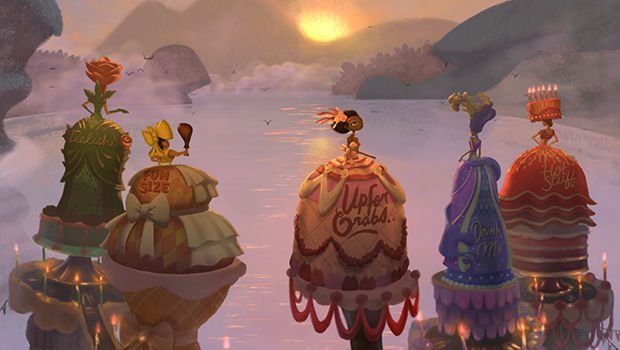 Both stories are engrossing and highlight a certain childish curiosity that I haven’t felt in a long time. I adored every second wandering through these worlds – the dialogue on all fronts is hilarious and crafty, the story elements thoughtful. Broken Age captures a style that is imaginative and expressive while still maintaining an environment that’s easy to interact with. Above all, the art is captivating so much so that at certain points in the game I found myself staring at scenes just to take it in.

Almost everything comes to life in Broken Age – characters range from charming to downright ingenious, all with spot-on humor and fantastic voice acting. One of my favorites is a needy spoon who regularly vies for the attention of Shay by shouting things like “It is my honor to be your training spoon today sir, I can’t wait to start MISSION NUTRITION!” Puzzles are integrated well into the character’s personalities – I found it amusing to discover what dialogue or actions would make characters give up an item or a piece of information. 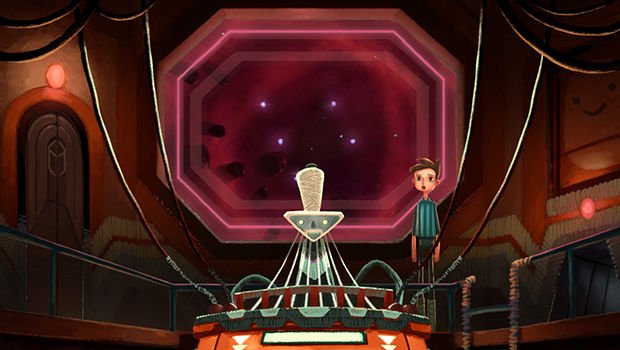 The game allows for switching between both stories seamlessly, which is not only creative, but a very useful feature. I enjoyed going back and forth regularly because it allowed for me to pace out the stories (for example, not getting too far on one side) and also gave me a chance to escape if a particular puzzle was stumping me. I also felt that Shay’s story involved more interactive gameplay elements while Vella’s focused more on dialogue and riddles, so being able to leave one story and hop to the other gave me a nice break.

The format of Broken Age is obviously very reminiscent of the older point-and-click adventure games, however there are a few interesting camera perspectives and design choices in the game that change up the formula a bit. For example, in one area of the game you can literally fall through clouds if you’re not careful where you step. Another section has the camera angle peering in through a window that’s being cleaned by an adorable spaceship minion. These details seem marginal, but they keep the gameplay fresh and original. 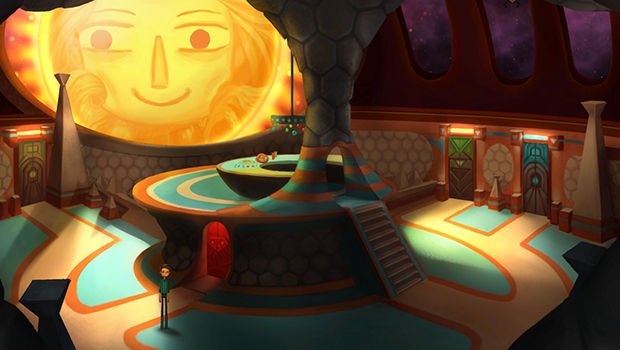 I found that the gameplay is so seamlessly integrated with the art that it’s sometimes hard to tell when you’re supposed to be viewing a scene and when you need to take action. For instance, it took me a while to solve one of the first puzzles in the game because the action I needed to take was during what I thought was a cinematic sequence. Although I appreciate that the game never took me out of the moment mentally, it did become frustrating after a while. My solution to this was to whip my mouse around the screen just in case the action circle appeared in future cinematics.

Broken Age manages to keep the hand-holding clues to a minimum without completely withholding answers from the player. However, as the game progressed I wasn’t entirely clear on what actions I could take. During one puzzle in particular, I had tried to combine and use every item possible to get past what I thought was the obstacle, but really all I had to do was move around it. The puzzles eventually make sense in time and are fairly thoughtful, although some of them could have stood to be a bit harder — because for the most part, they didn’t require a lot of brainpower. In the end this may not be a terrible thing but I would like to see a tad more complication thrown into the mix for Act 2. 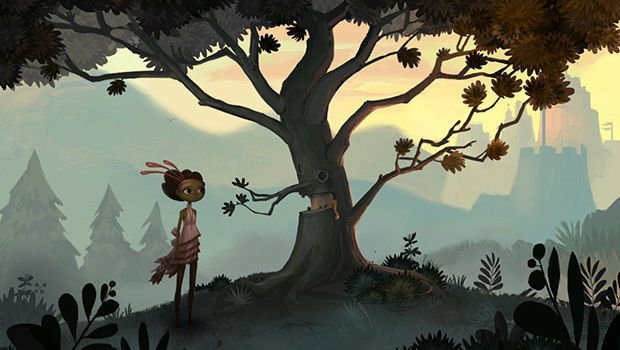 I haven’t felt this surge of nostalgia and excitement about a game in a long time, and I truly think Broken Age will be looked back fondly as one of the greats. That being said, the first Act is only a few short hours and ended on a nail-biting cliffhanger with no word on how long we’ll be waiting for the rest of the game. In some ways I feel cheated, but in the end it’s the heart of the game that matters – and that certainly isn’t broken.