Splash Damage has had a decent career working on various id Software properties over the years, but this is the first time that the lads from Bromley (respect) have struck out with an original IP of their own.

Brink has received a lot of attention for its unique visual style and energetic, run-and-gun gameplay. It’s certainly beautiful, and the energy cannot be argued against. However, there’s something … strange about Brink.

In fact, strange might not even begin to describe it. 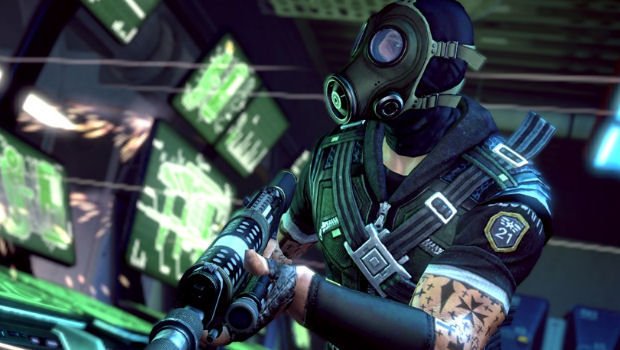 In many ways, Brink is an amalgamation of concepts from a variety of first-person shooters, but not the ones that usually get copied. There’s first-person parkour lifted from Mirror’s Edge; class-dependent, teamwork-heavy combat from Team Fortress; and campaign-based multiplayer from Left 4 Dead. Brink is a very familiar game, but in a way that feels uniquely refreshing.

Set aboard the Ark, Splash Damage’s colorful FPS presents a civil war between the Security and the Resistance, two forces with very different ideas on how to survive in a future Earth that’s been largely flooded. Cutscenes before and after each mission vaguely piece together the story of this struggle, although the only real way to get into the narrative is to listen to the huge amount of audio logs that unlock as you progress.

You may be fooled into thinking otherwise, but Brink has no true single-player feature. Its “Campaign” mode is a series of multiplayer matches that can simply be played offline against an incongruously oppressive AI. Even worse, the ally AI has apparently been scaled back, and never seem able to win against the enemy. In fact, Splash Damage’s campaign is so flimsy that you can even set it to “Versus,” which will allow other players to join and effectively turn it into an exact replica of the online mode. The campaign shouldn’t even exist, it’s so close to being an illusion. 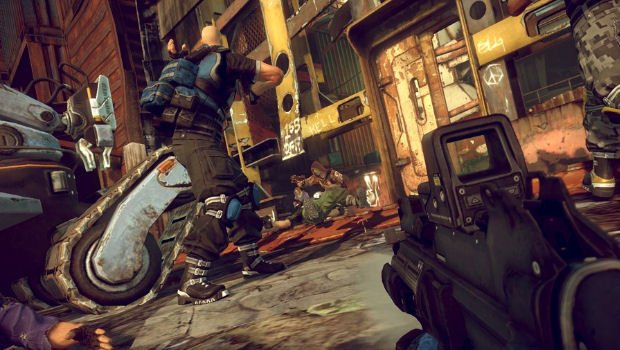 Make no mistake, this is an online shooter through-and-through, and should be treated solely as such. Fortunately, it’s one of the most rewarding online shooters you could ever hope to play, albeit one full of questionable — sometimes outright bad — design decisions.

Brink is all about customization. With hundreds of costume pieces to unlock and thousands of ways to combine them, players can create a stunning amount of diverse warriors. The character creator is simple, but boasts just enough choice to ensure that identical characters are statistically difficult to encounter. You’ll be able to pick facial types, masks, hats, jackets, shirts, pants and color schemes, as well as three different body types — light, normal and heavy — that have slightly different play styles.

The combat is objective-based, and objectives rely on classes. There are four classes to select — the destructive Soldier, the stealthy Operative, the productive Engineer and the healing Medic. Every class has its own set of abilities that can be unlocked using points earned with Rank increases. For example, the Engineer can earn increasingly powerful weapon turrets, while the Medic has access to different types of buffs — such as increased speed and invincibility — that can be bestowed upon teammates. 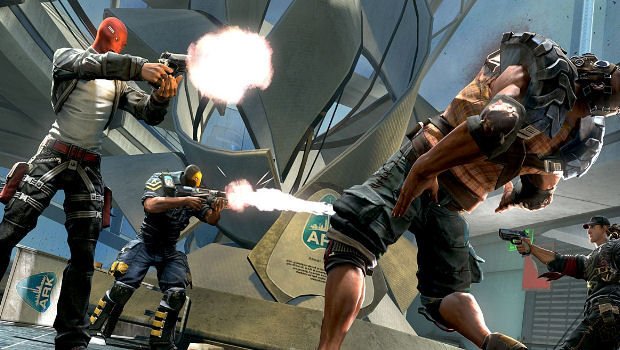 Classes can be switched at any time from Command Posts in-game, and sometimes this will be crucial to create an effective team. Objectives always need various classes to complete them, such as computers that must be hacked by Operatives or obstacles that require a Soldier to detonate them. Brink certainly has some great game types with a welcome focus on balanced teamwork. However, the game manages to stomp on this achievement by presenting the great gameplay in a way that could only be described as abnormal.

As stated earlier, the online matches of Brink are indistinguishable from the campaign, in a manner lifted directly from Left 4 Dead. What this means is that while one team has a distinct set of objectives in any given match, the opposing team’s goal is usually very simple — stop the enemy. While this is not a problem inherently, the game’s incredibly questionable map design and outright broken objectives completely screw it up.

For example, there’s one map where the Security have to escort a robot to a particular area. The robot, however, always passes through a choke point on the map with a convenient machine gun nest situated close to the Resistance’s spawn area. What invariably happens is that the majority of the match ends up stuck at this choke point. There are several maps with similar situations, some of which even reward the opposing team as one side gains the upper hand, bringing an objective closer to a spawn area in order to make the mission almost impossible. 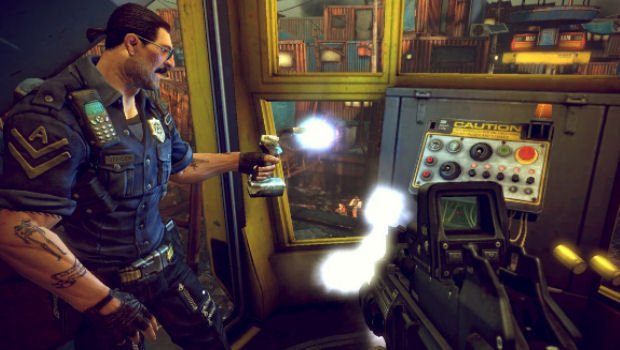 Every now and then, there are ways that the oppressed team can fight back, such as using Soldiers to open up shortcuts. Even with these minor advantages, however, there are still some maps that just don’t work properly.

While some of the levels have a more even chance of success for either side, I have a feeling there are certain stages that players are going to eventually refuse to play, rage-quitting should they find themselves on the wrong side. Had Brink employed something similar to Killzone 3 — where objectives constantly shift and are evenly split between teams — it might have worked. Instead, the game has a totally bizarre flow where even if a team is dominating an enemy and wins two objectives, they can still lose a hard-fought match because they failed the third imbalanced requirement.

This issue is partly mitigated by a “Stopwatch” mode, where teams take turns playing each side and compete to see who wins the fastest, but given the near-impossibility of some of these maps, the mode doesn’t offer much except both sides getting embittered, as opposed to just the one.

The true tragedy of this is that Brink is, by and large, utterly brilliant fun. The combat is tight, with impressive balance applied to the game’s many weapons and cool first-person parkour elements, which allow players to run frantically around some beautiful environments. The game’s objective system, with multiple missions that players can select at will, makes for a game that offers more choice than the average FPS. More importantly, Brink features incredibly fulfilling class-based gameplay that is a pleasure to sink one’s teeth into, with every class feeling important, effective, and perfectly tuned to fulfill its role on the battlefield. 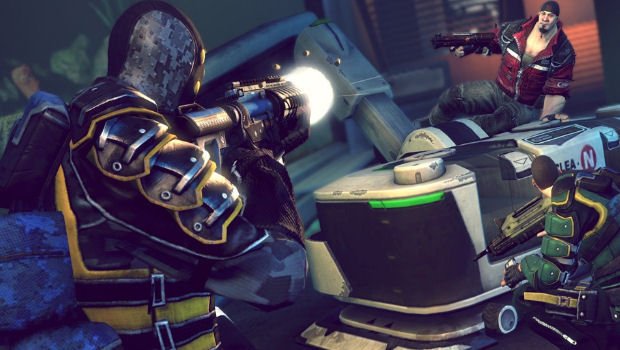 You earn XP for buffing allies, spotting enemy disguises, and capturing Command Posts. The game even recognizes kills that were earned by a group, rather than awarding all the points to the lucky guy who fired last. You’ll earn XP just for shooting at a guy, and the points multiply if you keep the offense going. Brink showers you with experience points from the outset, and ensures that every type of player has a chance to feel like they’re useful. If you’re not a fan of direct combat, you can heal your friends or capture territory. If you want to charge into the fray, you can arm yourself with Molotovs and chainguns. Alternately, you could just keep switching classes to efficiently finish the mission.

Splash Damage proudly embraces all styles of play with equal gusto, and I have to commend their efforts in this endeavor wholeheartedly.

It’s a shame (yes, another shame) that this rewarding experience feels all too brief. After only having the game in my possession for four days, I’d already maxed out my character and had nothing further to accomplish with it. Characters max out at rank 20, with no extra bragging ranks or unlocks beyond that. Any XP earned past this point is lost; suddenly, you find that Brink‘s rewarding embrace has abandoned you and the experience feels slightly hollow. Even the Achievement/Trophy for unlocking rank 20 says, “Time to make a new character,” acknowledging that there’s nothing further to achieve. 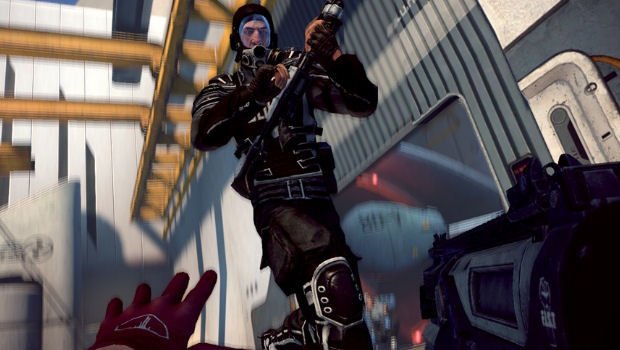 The same is true of the weapons and their attachments, all of which can be unlocked within half an hour after you’ve played a set of “Challenges” — little more than glorified tutorials that aren’t very fun due to the ludicrously aggressive AI and lack of equalizing support, even in co-op mode. Once the Challenges are beaten and rank 20 is unlocked, there’s little else to do unless you fancy re-speccing your character at the cost of ranks or starting again from scratch.

As much as I’m complaining, I want to stress just how much I have adored my time with Brink. Even among my favorite online games, I’ve not played one so intent on encouraging players to work together, have fun, and feel like they’re contributing. My frustration with this game lies within this very brilliance and how it’s juxtaposed with bizarre ideas such as grossly imbalanced multiplayer and the imparting of almost all content within the first few hours of play. I love this game, I truly do, but I have a list of agitated questions for the developers as long as my arm.

To return to the positive, it’s the little touches that really make this game stand out. The art style’s terrific, with a wide variety of clothing and masks that can’t help but look cool and a bright, distinct color palette that most modern shooters refuse to use. Even the characters, with their giant noses and sharp chins (they all look like Nosferatu), at least look unlike anything else in a modern videogame, with TimeSplitters providing the closest comparison. 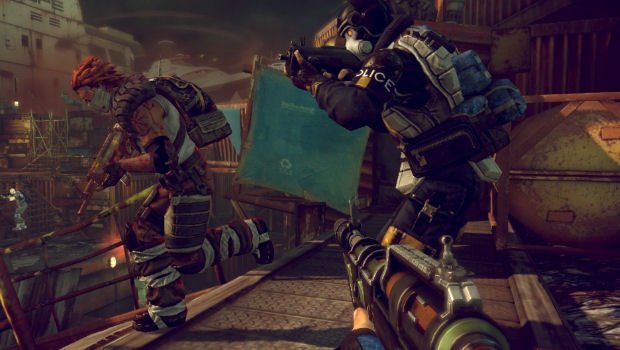 The parkour animations, especially the ability to kick enemies over with a well-aimed slide, are satisfying to pull off, even if the controls get a little confused about what you want them to do sometimes, and the range of abilities is staggering. A lot of work has gone into making Brink a cohesive and immersive experience. It’s just all got this permeating strain of straight-up bad design running through it.

It’s also worth noting that, at the time of writing, there are some issues with online lag. Most of the time it’s barely noticeable, but there have been instances where matches were unplayable and I had to come back later. A launch patch is arriving for consoles that should address this, while the PC version boasts dedicated servers.

Brink is a confusing beast. Inspired and engrossing, exasperating and chaotic. Putting my thoughts into words has been difficult, as a series of garbled, guttural noises are what I want to make whenever I try to describe this game. I want to excitedly shout about how happy it makes me, but I can’t do so without adding important, overbearing caveats. This is the type of game for which the phrase, “There’s always a but,” was made. There is always a “but” with Brink, some sort of unusual downside to every bright spot.

Yet this is the online game I may play more than any other this year. It’s a love/hate game of the highest degree, and I personally love it too much to hate it, despite understanding and accepting that anyone who does hate it will have every right and reason to do so.