Imagine, if you will, Syndicate as a shooter. No, not that one. A shooter from the older days, when console and consumer PC hardware lacked the power to render violence in the first-person. 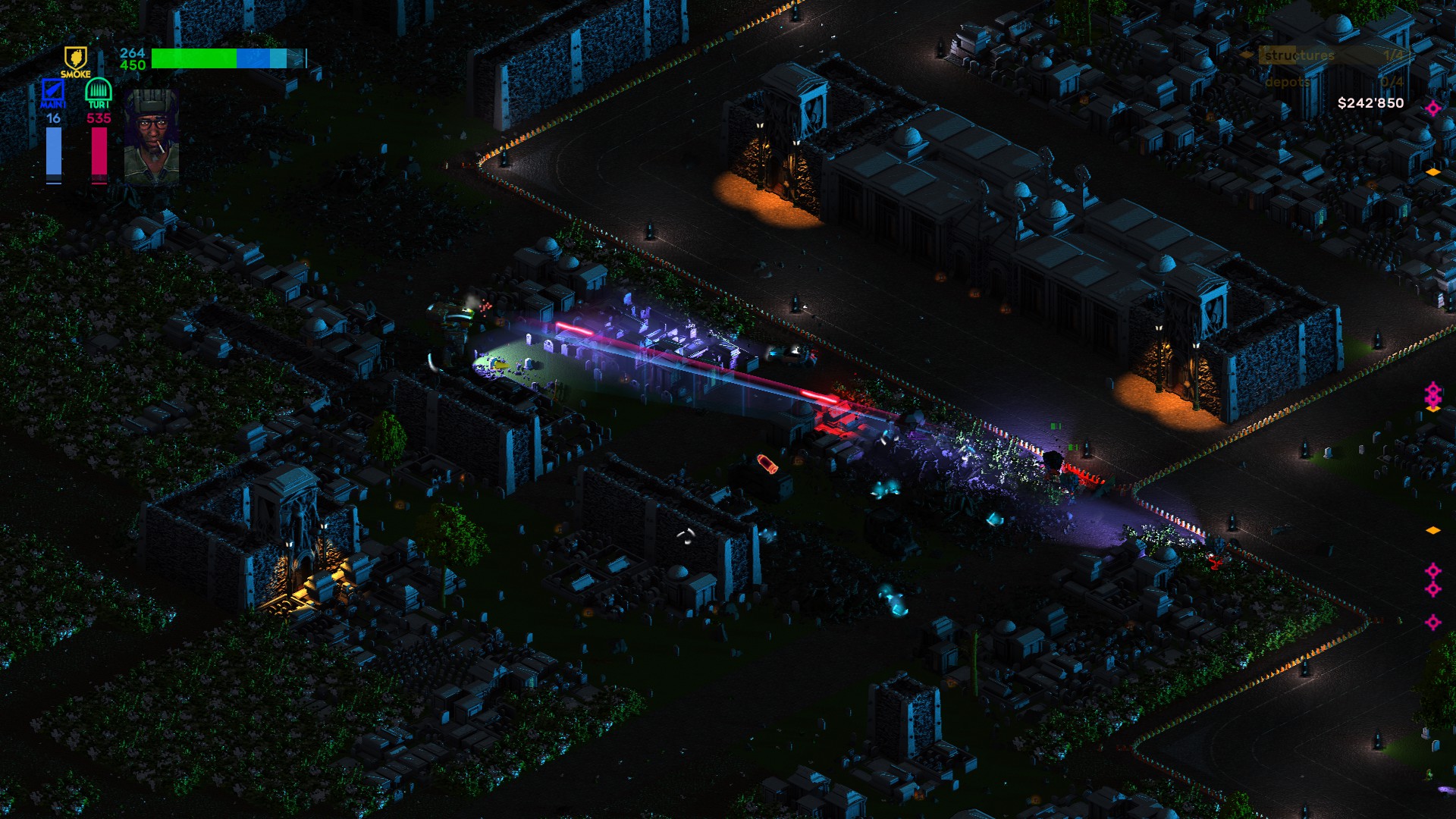 And it works well that way, promising absurd levels of explosive violence as players pilot a wide array of heavily armed tanks, hover-vehicles and mechs through Solo Nobre, a planet desperately in need of liberating/conquering. At first glance, Brigador promises a spectacular-but-shallow romp through fire and carnage.

That illusion is quickly shattered, though, and replaced with something altogether more interesting. For one, Brigador is hard as balls. Playing the game like one might play a standard shooter will quickly lead to numerous and repeated deaths. Even the toughest vehicles and mechs can go down quickly, and not every weapon is suited for every threat, which the game makes sure to mix up regularly.

Enemies are accurate, well-armed, and take advantage of their weapon and movement ranges to box players in and attack from flanking angles. Shields can only be recharged by killing certain enemies, and ammo is almost always scarce, as players scavenge for it among the wrecks of foes and nearby stationary-but-volatile ammo depots. Brigador is less a place to rampage carelessly and more a place where careful, precise play and mastery of movement is rewarded.

And movement is certainly something to be mastered. Mechs, tanks, and hovering Anti-grav vehicles all have unique movement characteristics, and every weapon has its own traits and qualities to be considered when facing threats. Ballistic trajectories and aiming play a major role in working with Brigador, a quality notably lacking in most older vehicle shooters, and one that may confuse some players at first.

There’s plenty of content to chew through, however. The campaign mode, consisting of a linear series of missions, helps introduce players to the variety of styles on offer by initially limiting the available vehicle and weapon setups, while offering unique conditions and challenges, ranging from having to kill everything on the map with nothing but a motorized, armed tricycle to outrunning a swarm of hovering kamikaze bombs long enough to scavenge some ammo and fight back. 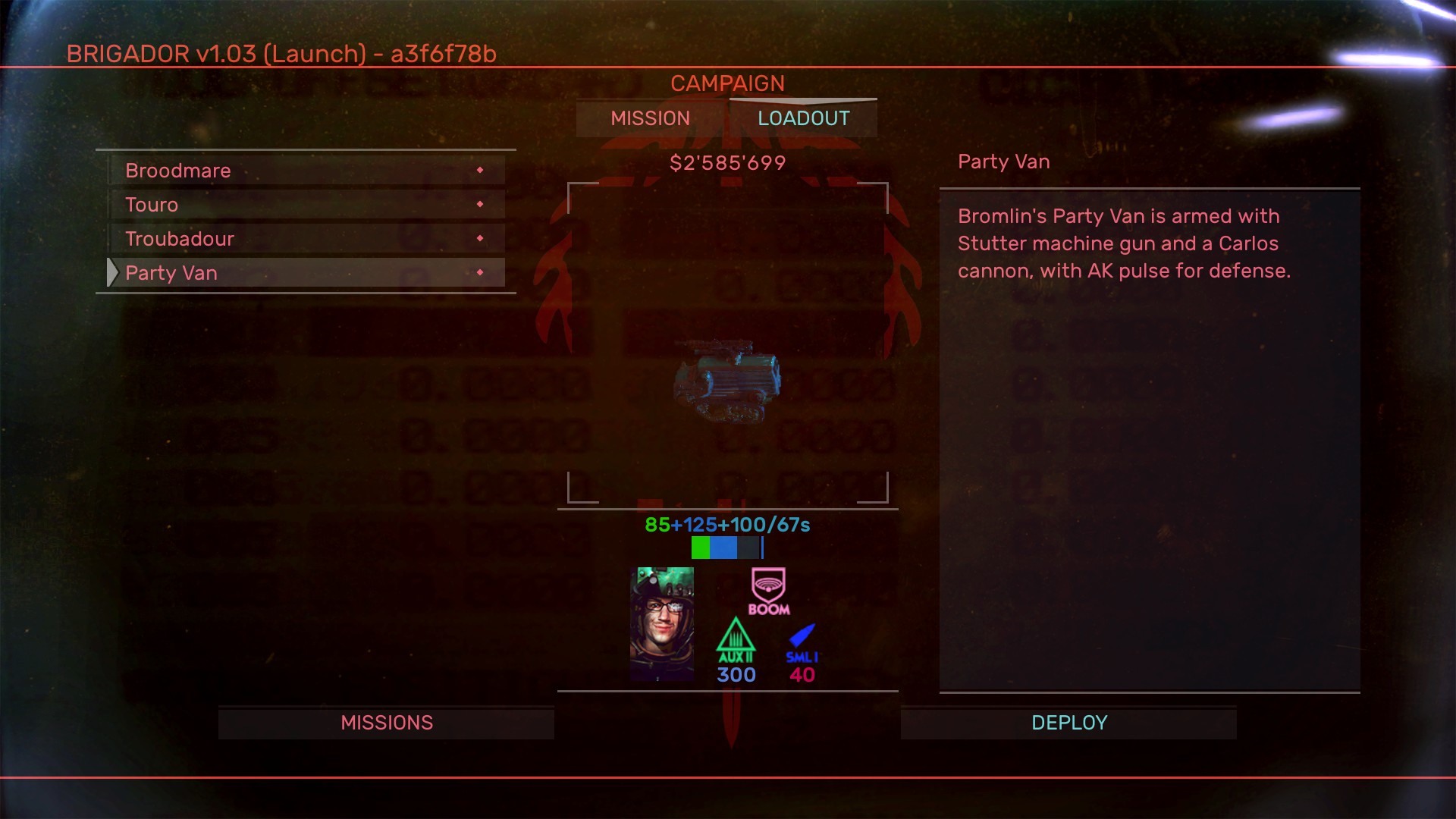 Beyond the campaign, a freelance mode generates environments procedurally, allowing for a single-session liberation of Solo Nobre, should players want, as well as allowing free choice of vehicle and weapon loadout. This is where the meat of the game lies, not least because all the vehicles and weapons need to be bought with proceeds earned in missions from both modes. Pilots that want to see everything and explore every option will have a lot of work ahead of them.

Where Brigador tends to fall short, though, is in narrative. Characters and plot are largely absent, and the game’s setting serves better to establish a chilly, dystopian future atmosphere than actually tell a story. It worked for me, but others expecting more dramatic motivations for their vehicular carnage may feel underserved.

Small interface frustrations also exist. While it’s a joy to practice movement and aiming (Tip: Shots land slightly ahead of a weapon’s “laser sight”, so to hit a target, make sure the aiming lines pass through it), the minimalist HUD clusters vital information – ammo counts and health/shield levels – in the corner of the screen. Given how much attention combat can demand, a more convenient way to be reminded of key data points would be welcome.

None of these niggles do much to detract from the overall experience, though, and despite them Brigador ends up a thrilling, hectic vehicle shooter that’s quite a bit deeper than the forebears that inspired it.