Amanita Design showed that there was definitely still legs in the point ‘n click adventure genre when they released the charming Machinarium in 2009. The tale of a small robot seeking his true love both looked and sounded great and the game was a really solid old school adventure title. However, Amanita’s new game Botanicula owes more to the slightly more abstract Samorost games, the last of which came out in 2005. Does Botanicula still fit into the point and click mold or is it more unique type of game?

If you’ve played either of the Samorost games, particularly Samorost 2, then you’ll have a good idea what you’re going to be playing with Botanicula; beautiful artwork, lovely sounds and a much more abstract approach to a point and click game. The game relies less on traditional point and click logic and relies instead on using the environment and the creatures that dwell there to proceed.

The game starts as a malevolent spider creature makes it’s way up a magical tree, consuming the life force out of the tree itself as well as the multitude of small creatures it finds on it’s way. At the top of the tree is are a trio of glowing orbs, the source of the tree’s life force but as the spider creature tries to take the final orb, it falls eventually being found and hidden inside a tiny acorn shaped creature. Realising the orb must be kept safe, the acorn creature summons four of it’s friends and they begin a journey down the tree in an attempt to keep their home safe. 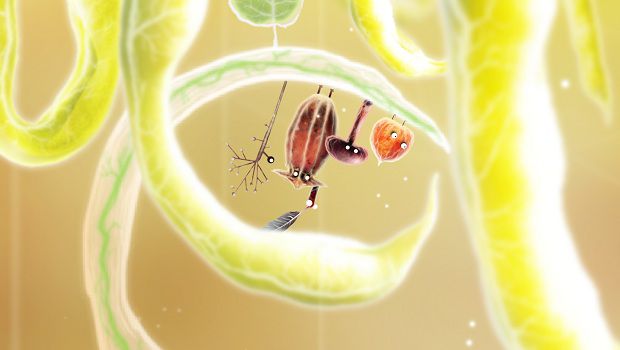 If you’re wondering why I’m using vague terms for things in Botanicula, it’s because there’s no written or verbal identifiers used for any characters in the game. None of your team are identified in any way and aside from the menu system, there is not text in the game nor is there any English voice acting. Creatures communicate either in unintelligible grunts and growls. However, Botanicula wouldn’t really be the game it strives to be with both voice acting (not needing any localisation team must be a boon for an indie developer) or big text bubbles. That being said, there’s a nagging feeling of disconnection and vagueness whilst playing Botanicula that was hard to shake.

Whenever you reach a challenge or an obstacle, more often than not your merry band of tree dwellers will simply stand there as your invisible hand either manipulates the environment or interacts with other creatures. The times when your creatures get involved certainly felt like they were in the minority and in those cases, it really felt like you were simply clicking on each member of your group to eventually find who was the “correct” answer to the puzzle. The problems in Botanicula may not seem obvious or even logical sometimes but they’re not unfair or overtly complicated. That being said it can feel a little frustrating when you complete a challenge and all you’ve really done is click three times on a random rock or leaf. 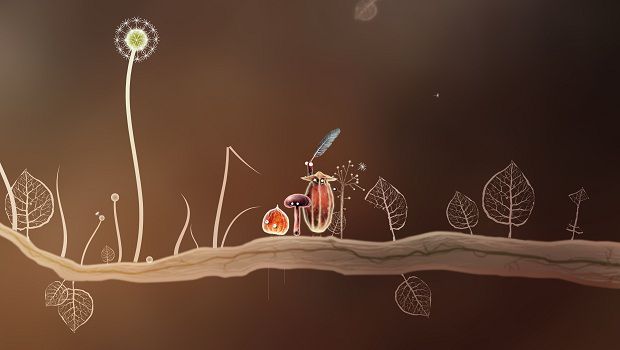 That being said, the puzzles themselves are a wonderful mix of interactive environmental puzzles and ones that rely on a combination of sound and reactions. The solution to many trials will reveal themselves with a burst of music and singing and all manner of crazy creatures dancing and celebrating. When this happens, it’s hard not to get swept up in Botanicula’s strange world. Almost every screen is buzzing with life with all manner of strange looking bugs and animals milling around, the branches of the tree itself almost look more like veins with tiny blood cells in them. Whilst I’m hesitant to push the visuals of a videogame too much, Botanicula is certainly beautiful.

Botanicula occupies this weird space where in many ways it’s a traditional adventure game and in many others it’s a more experimental art game. The fact that it straddles both sides so neatly is testament to Amanita Design’s focus here. There’s very little fluff or padding and while the game is not always focussed on guiding you down a certain path, it’s hard to get sidetracked and lose what your goal is. Whilst a little more exposition and narrative would have been welcome, it’s great to see the developers stick to their guns and make Botanicula a wonderful looking and sounding experience.