With Borderlands: The Pre-Sequel, I like and dislike different parts of it in almost equal measure. The combat is exciting and the characters are likable. On the other hand, the environments are a little dull and it suffers from a host of obnoxious bugs.

Claptastic Voyage, the first and only “big” piece of downloadable content had the opportunity to fix a lot of what was broken with the base game. For the most part it succeeds in that endeavor, but it still seems like 2K Australia has a bit to learn about making the loot-shooter truly great. 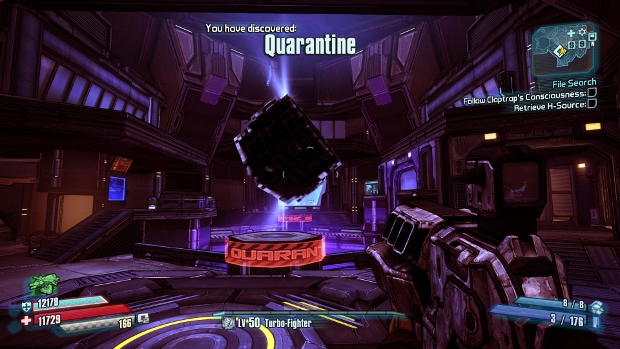 With the premise of entering the mind of Claptrap, The Pre-Sequel had a ton of freedom with where it could go and what it could do. As with the Dungeons and Dragons-esque setup for Tiny Tina’s Assault on Dragon Keep, the narrative hook allows Vault Hunters to leave the planet of Pandora (or its moon Elpis) in favor of even more fantastic locales. In practice, Claptastic Voyage takes players from the samey blue-gray moon surface and industrial complexes to samey blue-gray electronics (that look a lot like industrial complexes).

At least, that’s how the first half goes. It’s immediately disappointing that the limitless setting produces such uninteresting environments, but that changes further in. A little ways into the DLC the Vault Hunters can access Claptrap’s old memories, revisiting areas featured in previous titles like Fyrestone or Overlook. Eventually, the shooting goes deep enough into Claptrap’s mind to find wholly original, diverse environments. The Escherian temple of Claptrap’s subconscious is particularly fun to explore.

One thing that Claptastic Voyage does especially well is to fill in gaps in the overarching story that have only previously been hinted at. It does this with the memory exercise in Overlook, illustrating the town’s deterioration to the state players find it in Borderlands 2. It ends with a direct lead-in to BL2, showing how Claptrap meets Sir Hammerlock in the frozen tundra on Pandora. It even goes so far as to explain Claptrap’s penchant for dubstep where it wasn’t present in the original Borderlands.

All that said, while the details are cute for fans of the lore, the main plot in Claptastic Voyage has been done several times in the Borderlands series. Perhaps it’s intentionally self-referential, but the plot device that introduces the main villain early on as an ally who “unexpectedly” betrays the heroes is tired at this point. He is clearly designed to let the player know what’s up, so watching the characters go along and be flabbergasted by the betrayal creates a sort of disconnect between player and protagonist.

At a micro level, the writing follows what we have come to expect from the series. Though it isn’t as laugh-out-loud funny as Tales from the Borderlands has been, it hits the right notes of dark comedy. It manages to get through its eight-to-ten hour campaign without making nearly as many pop culture references as the last few games in the series have done.

Gameplay is largely unaltered from The Pre-Sequel‘s main campaign. It remains fast and frenetic to moon jump and butt slam between enemies. There are very few zero-atmosphere environments in Claptastic Voyage, so players are free to use the double jump without having to worry about running out of oxygen. 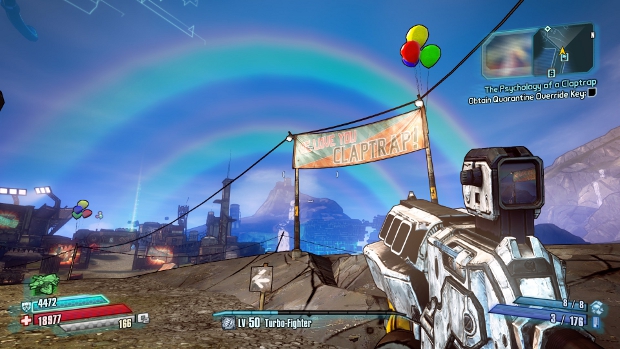 Almost all of the enemies are new in some way, with viruses, bugs, and protection software given physical manifestations to explode. Even the old standby enemies like bandits and psychos behave a bit differently, able to phase in and out of existence occasionally since they are computer projections generated by Claptrap’s memory. The theme of software given life extends to in-universe advertisement, with foes who do nothing but stream audio to the player until they are destroyed. There are also pop-up ads: chest-high walls that appear from the ground and can either be closed or serve as randomized mini stores for health or ammunition.

The final boss deserves special mention, though not necessarily for the best reasons. It begins as an interesting fight, with a lot of different tasks the player has to juggle. There are jump pads, helpful “volatile bits” to trigger, lava to avoid, small enemies to keep at bay and use for revives, and the main boss who can deal some serious damage if he is ignored. It’s exciting for the first 10 minutes. Then it keeps going. Then the boss transforms and recharges his shield. Then it keeps going. Then he transforms and recharges his shield again. I timed it; it took me 45 minutes to solo that one fight, and that was on my second try. (On the first try, I spent what felt like an hour, made it to his final form, died, and started back at the beginning of the fight. I quit for the night.)

It illustrates how 2K Australia can get some aspects of Borderlands so right, but just miss the mark in other ways that bring the whole experience down a bit. The boss just has too much health, and that one element turns it from an interesting fight into a slog. It’s almost as if it is intended to be a raid boss, except that it’s required in order to complete the story. In fact, there is no optional raid boss like there have been in past Borderlands DLC packs, which is a little disappointing considering how phoned in the raid boss in The Pre-Sequel‘s main game is. 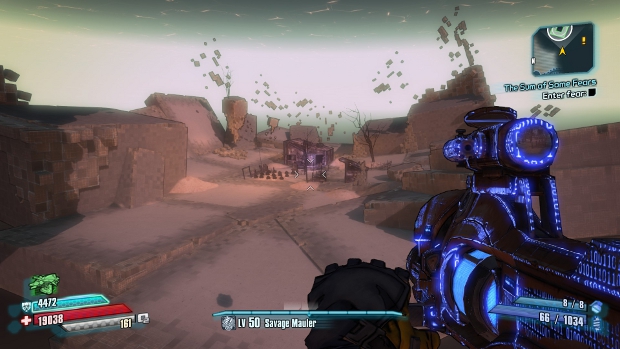 That said, 2K Australia does its own thing for high level content. In addition to farming the end boss for Legendary drops, a special arena unlocks after getting through the story. It boils down to fending off waves of enemies in an arena, but it allows parties to customize various aspects of the battle. Players can increase or decrease the difficulty and add “mutations,” like bonus damage for certain gun manufacturers or increased magazine size at the cost of decreased reload speed. Of course, more difficult settings yield more valuable loot. It’s an interesting idea that I’d like to see explored further in future installments.

Overall, Claptastic Voyage is an improvement to Borderlands: The Pre-Sequel. It seems like 2K Australia has been listening to a lot of the criticism of the base game. Aside from some invisible walls, I didn’t experience any of the bugs here that detracted from The Pre-Sequel. The environmental design starts off disappointingly unimaginative, but soon goes to unexpected places. The core gameplay is as fun as it has ever been.

However, Claptastic Voyage still suffers from some of the problems that plague the entire series. The main plot is average, lacking any real standout moments worth discussing. It exists as a vehicle to get players between gunfights or to the more entertaining optional missions. This won’t go down in history as an example of exceptional DLC, but it does what it does well and it’s worth the time to play through.