When Black was released in 2006, I found it a most frustrating experience. It was incredibly stylish and looked gorgeous for its time, featuring some amazing environmental destruction and a bold artistic approach. However, something about it just felt … second rate. The action was uninspired and the story might as well have not been there. When the time came for Black to stand up and be counted, it promptly sat on its ass.

With Bodycount, a number of Black‘s developers have returned to create a spiritual sequel, and they certainly kept a sense of tradition. The lifelessness and threadbare plot are back in full effect, but now the game doesn’t even have impressive visuals to fall back on. 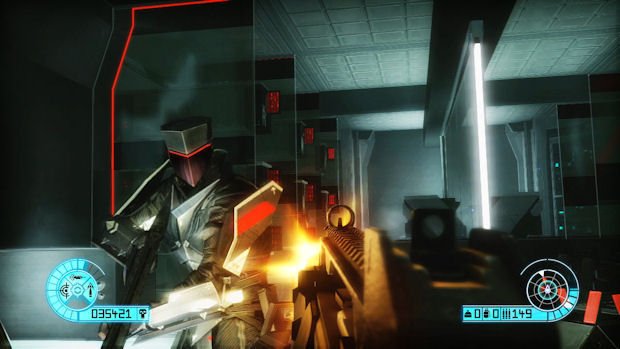 Bodycount places you in the shoes of a member of The Network, which bills itself as a “modern solution” to “modern problems.” Apparently, the “problem” in this game is an African civil war, and the “solution” is to encourage peace by decimating both sides with big guns. Eventually, some group called The Target shows up and you have to destroy it for no good reason by shooting more people with more guns.

That, in a nutshell is the plot of Bodycount. There’s almost literally nothing else to it. Africa has a war, and then some bad people are bad for reasons that are never explained. I hope you like your violence unjustified! 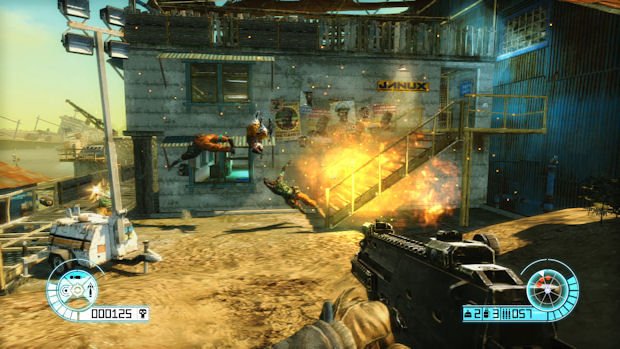 The one way in which Bodycount tries to appear unique is, itself, something we’ve already seen before. Players are graded and rewarded for performing “Skill Shots” during combat. Chaining together particularly impressive or accurate kills rack up a combo meter — the higher the combo, the better the score. It would be a very cool idea … if Bulletstorm hadn’t launched first, with a much better game.

Whereas Bulletstorm constantly rewarded players with all manner of exotic kills, ranging from groin shots to electrocutions and more, Bodycount‘s kills are so vanilla that it doesn’t even begin to compare. In Bulletstorm, you can lasso an enemy, kick him in the air, and shoot the poor victim in his throat. In Bodycount, you can … score headshots and shoot explosive barrels. The “Skill” shots in question are nothing we haven’t seen in every first-person-shooter over the past ten years, and to release in the same year as Bulletstorm only drives home how uninventive the developers were.

Enemies drop “Intel” upon defeat, which is used to initiate special abilities. The four abilities include temporary invulnerability, explosive bullets, the power to highlight enemies for better targeting, and a devastating airstrike. While useful in the game, it’s yet another case where Bodycount is doing things we’ve all seen before. 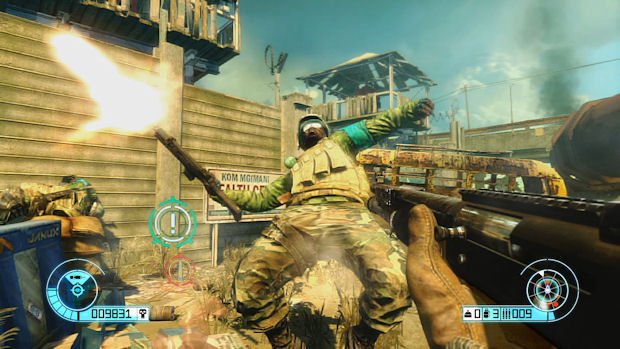 Outside of the Skill Shot system, we’re left with a mediocre first-person-shooter that doesn’t do anything to earn a player’s attention. Levels are little more than big arenas full of enemies that feature only the most rudimentary of A.I, guns consist only of shotgun, assault rifile and SMG variants, and even the destructible environments fail to stand out as particularly impressive in a generation that gave us Red Faction: Guerrilla.

Every mission is the same, and even when you’re given the interesting objective of negotiating or apprehending a target, that goal invariably changes halfway through, turning into the same old assassination mission. Don’t believe the game when it tells you to keep an enemy alive or simply talk to someone, because it never happens. Such objectives only exist to drive home how repetitive and monotonous the game actually is. I’m all for games where you just need to kill things, but if the killing in question is this flavorless, some mission variety is essential.

It’s not like the game’s four-hour campaign is crushingly unpleasant to play. It’s just so mundane that to play it feels like a chore. Repeating levels full of repeating missions, churning down clone armies of repeating enemies with a range of repeating firearms. Bodycount typifies the phrase “One trick pony,” with the added insult that the trick in question isn’t even a good one. 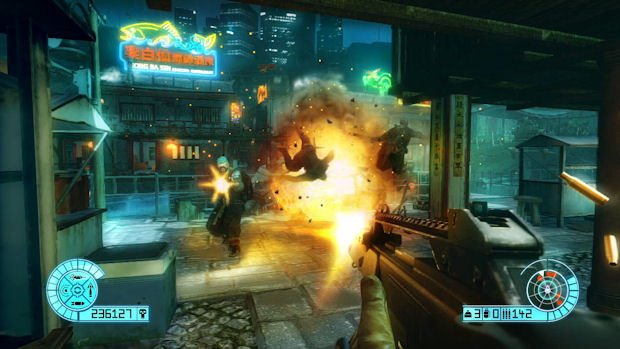 As if to truly emphasize how uncreative the game is, it features the kind of typical, cynical, shoehorned multiplayer that manages to be exceptional only due to my wondering why anybody would bother developing it. Multiplayer consists of Deathmatch and Team Deathmatch across a small range of maps, and about five people are playing it. Slightly more interesting is the game’s co-op feature, a fairly standard wave-based survival mode. Once again, however, it does only the bare minimum and there are simply better survival modes out there.

The game’s not ugly, but it’s definitely no stunner. If Bodycount does one commendable thing, it’s the presentation of a rather colorful visual style in an industry full of brown shooters. Environments are brightly lit, or at least feature strong color contrast, and there’s even some nice music to accompany them. Character design is from the science fiction bargain basement, however, and each level is rather flat and lifeless in spite of the color. Like so much about this game, it feels as if the developers only went far enough to make the graphics bearable, and went no further. 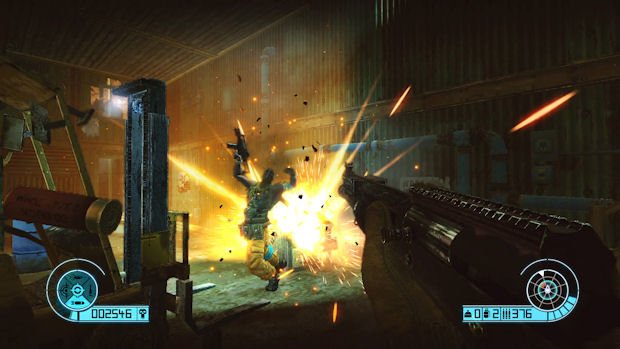 Bodycount might have gotten more attention five years ago, but even compared to Black, it’s unexceptional. The word “generic” has become quite overused in recent years, but if ever a game truly deserved it, Bodycount would definitely be a top contender. It’s about the only thing it could hope to contend in, because compared to the dozens of other, superior FPS titles on the market, Bodycount is just another shooter in a market that already has far too many of them.