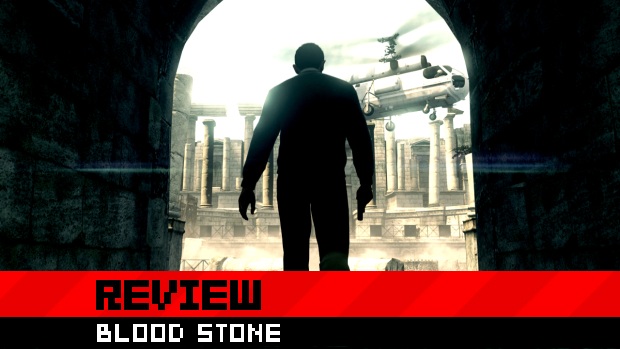 GoldenEye 007 for the Wii wasn’t the only Bond game to come out this holiday season. No, the Xbox 360 and PlayStation 3 also got their dose of Bond in the form of an original Bond adventure called Blood Stone. Since the day these two games were announced it was easy to find people excited for both. We know that GoldenEye turned out great, but not everyone has a Wii, and Blood Stone is a different take on the franchise anyway.

Does Blood Stone enter into the ranks of other quality Bond games like the aforementioned GoldenEye, or does it fall short of the high standards its protagonist conjures up? I finally got the time to charge through the game and can easily tell you that the only reason you would ever choose this game over GoldenEye is if you didn’t own a Wii.

So if you’re one of the five people in America in that boat, please read on to see if Blood Stone is for you. 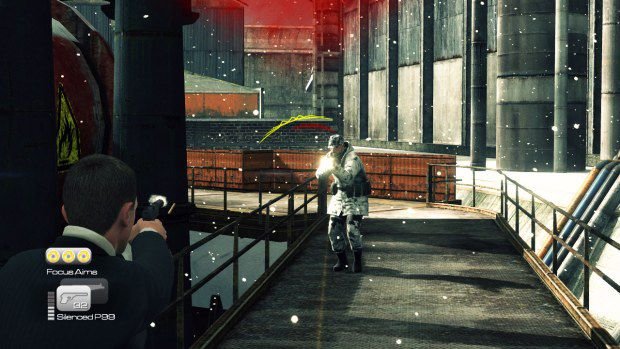 Blood Stone is not a bad game. It just isn’t a very original one. Everything it tries to do is done better somewhere else. Because of its liberal borrowing from other games, and a penchant to go too far over the top (we’re talking some Roger Moore era ridiculousness that doesn’t jive at all with Daniel Craig’s Bond), the game commits an even worse affront than not being original and that is not feeling very Bond-ian. The fun of playing as James Bond comes from playing as James Bond. When a Bond game makes you feel like you’re nothing more than a Bond knock-off, then it absolutely fails as a Bond game. In my mind, this is an unforgivable flaw, and I’m sorry to report that Blood Stone feels far more like a knock-off than the genuine article.

This issue is most apparent in the game’s plot, which so obviously mimics what a Bond game (book, movie, etc.) should have in it that it ends up feeling more like a bunch of Bond movies stuck together than an original storyline. Bond (after an action packed opening level) is thrust into a suspected bio-weapons ring that he must shut down. With the help of undercover MI6 agent Nicole Hunter he infiltrates the bad guys’ plot and then takes them down. There’s actually a bit of a twist at the end that desperately tries to make the story more than it actually is, but the whole thing is already so convoluted  that your ability to care is short lived. Sadly, it appears that the plot line was set up to flow over a series of games, so we may be seeing more of this ho-hum story. 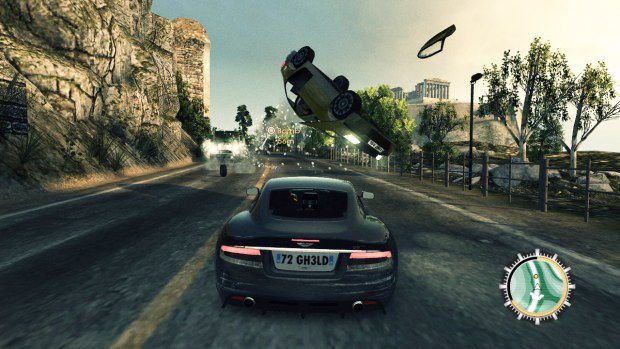 Caring about what is going on in a Bond vehicle isn’t always that important, though. The action, fights and set pieces are what really stand out. And Blood Stone does have a few very cool sections. The game is divided up into driving and shooting levels. The shooting levels use a cover system, which works well enough and can lead to some great take downs. Melees are actually very cool and trigger some of the cold-hearted kills that Craig’s Bond has practically trademarked. Every time you pull off a physical take down you get a “focus shot” that allows you to kill an enemy in a single shot while time slows down. You can chain up to three of these together, which allows for some solid strategic gameplay even if it is fundamentally useless on the whole. I found myself using it once in a blue moon on a normal difficulty setting, and only slightly more often on difficult.

In fact, “useless” sums up a lot of the fighting in Blood Stone. By the end of the third level, you’ve pretty much experienced every gun, and the challenges and layouts of levels start to repeat themselves. The enemies act almost the exact same way from level to level, and it’s nearly impossible to detect any real increase in difficulty as the game progresses. Bond runs from shootout to shootout without much drama or action in between. That’s not to say that the game is devoid of some fantastic Bond moments (running away from a giant drill in one early level is especially well done), but it lacks that certain something necessary to feel legitimately Bond. One of the best things EA did in their Bond games was insert tiny little Bond moments that gave the game a little character. Those moments are generally missing from Blood Stone. Instead, you get massive battles on giant gun ships that feel like they should be in Gears of War. Sadly, even if this wasn’t a Bond game and I wasn’t complaining about the lack of Bondness, Blood Stone still wouldn’t be that great of a cover shooter, especially because of the aforementioned repetitive levels and AI. 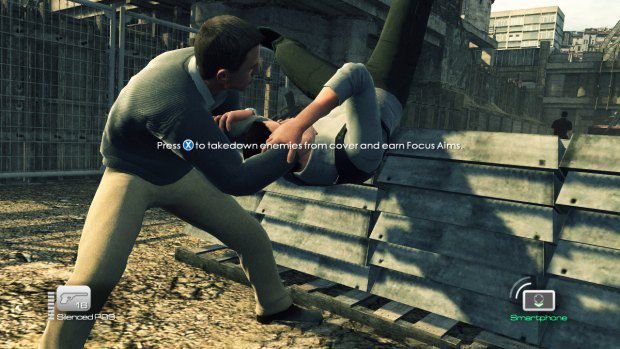 I’ve saved the worst for last, however. In an attempt to mimic Arkham Asylum’s  “bat-sense” mechanic, the game uses Bond’s smart phone — for everything. Whenever you want to get a look at where to go or how the bad guys are organized, you flip out your smart phone and the screen turns green and little icons pop up along with x-ray views of all the enemies. It’s supposed to help you plan your attacks, but thanks to the mediocre AI, it’s just annoying. And, like I said, they use the phone for everything. Locked door? Bust out your phone. Need a picture? Take your phone out. Crack a code? You guessed it. In an attempt to make Bond less gadget-y, they simply made him rely on one stupid gadget. Worst of all, Bond actually flips it out whenever he’s using it. This means if you’re using it in the middle of a gun fight you look like an idiot running through a battlefield staring at your cell phone. That might be a petty complaint if the mechanic was interesting at all, but since this “phone gameplay” mechanic has come to symbolize what I dislike the most about Blood Stone, having it crammed down my throat in such an overt way feels even worse than it should.

Bizarre Creations, the now defunct developer behind Blood Stone, is most known for their racing games and it clearly shows in Blood Stone. The racing levels stand out above the shooter sections of the game, not just because they’re designed better but because they actually feel like giant action set pieces that Bond might find himself in. Unfortunately, the quality of the driving levels range quite drastically from infinitely boring to incredibly clever. And while the “courses’” designs work sometimes, at other moments, they can be insanely frustrating. The better driving levels feel like something out of Split/Second, with explosions going off everywhere or, to be more specific, a giant dump truck bowling through Bangkok streets as Bond desperately chases it in a tow truck. However, it often seems that too much is going on, and the “courses” aren’t designed well enough to keep you from dying cheaply or falling into hard to see blind spots over and over. To add insult to injury, the final stage is a driving level so mundane that it feels like Bizarre Creations tacked it on simply because the game was too short (and it still is too short, even with this level). 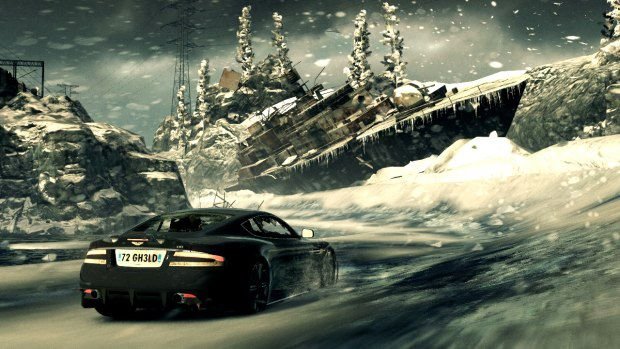 It’s also of note that Daniel Craig just looks plain terrible when rendered in this game. Any of the depth and hard edge to his face that I think make him a good Bond are gone. He actually looks a lot like a monkey. The other character renders aren’t too great either, with Dame Judi Dench looking especially frumpy in her digital self. Graphics are obviously not everything, but damn, they sure would have helped in this case. That’s compounded by the fact that the game’s voice acting is far below par. Craig clearly put a bit more effort into this than he did his GoldenEye performance (which was horrendous) but everything is still flat and careless. Combining a flat face with a flat performance leaves you out in the cold when it comes to story and caring about the game.

Surprisingly, the multi-player (which I assumed would just be tacked on because Bond games need multi-player) is pretty fun. This is mostly because it strips off all of the things that aren’t fun in the single-player campaign and delivers a solid cover shooter with some decently designed levels. There’s nothing too fancy about it, and it has all the standard accoutrement, like weapon load outs and a point system that lets you buy better things. Thanks to the lack of bad AI and the removal of the phone, it’s fun to play with some friends. There a few cool modes, like a “last man standing” one that gives the game a bit more spice. My only complaint is that, once again, there isn’t much Bond in it. There is some fun to be had, but unlike GoldenEye’s multiplayer it’s fun you can have with plenty of other games out there. Sadly, there is no split-screen, which is more of a norm nowadays. I had hoped, though, that because it was Bond they’d include it. 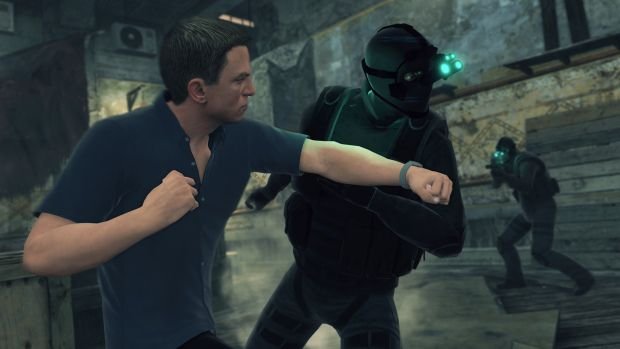 You may be thinking that I’m coming down hard on the game simply for not being Bond enough, and that’s entirely possible. However, I’d like to stress that even without my problems with the Bond-ness of it all, this is a relentlessly mediocre outing that simply aims to copy instead of improve at every turn.

It is strange that Eurocom could nail it so well with GoldenEye, and yet at the exact same time, Bizarre Creations misses the mark in so many ways. If you’re a Bond fan, you’ll be routinely disappointed by Blood Stone, but you’ll probably play it anyway. If you’re not one, then I can’t really stress enough that there are better games out there that don’t crush my hopes and dreams.