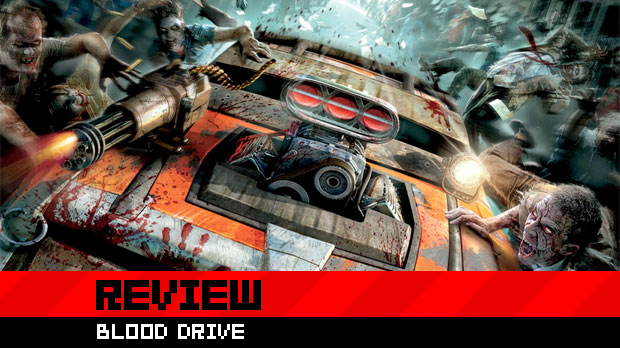 Sidhe Interactive’s Blood Drive welcomes players to Las Rulettas, a fictional Las Vegas-inspired setting for a vehicular homicide reality show that shares the game’s name. Bonus: Blood Drive’s arenas are littered with the undead, who contestants can plow into, for splattering gore all over the screen, but also for scoring points.

The box’s tagline reads “Brains, Stains & Automobiles,” and it’s seemingly the perfect set-up for what could be a b-movie-style guilty gaming pleasure. Unfortunately, it feels as if the developer went out of its way to sabotage its own title, making Blood Drive about as delightful as being stuck in an apocalyptic traffic jam. 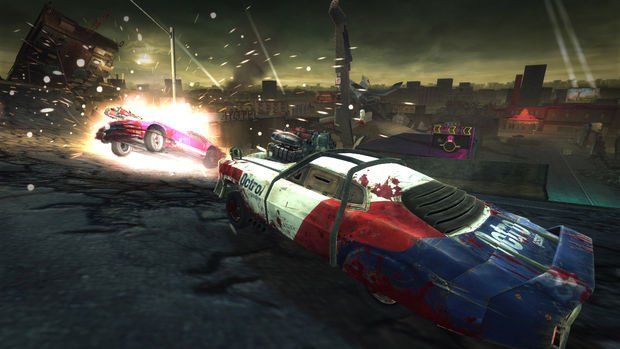 Blood Drive is an arena-based game, broken up into a number of event types, most of which boil down to one of two things — kill as many zombies as possible or destroy opponents’ vehicles. Sometimes it’s an amalgamation of both, or sometimes it’s an elimination-style affair. There’s also a “King of the Skull” mode where you’re tasked with grabbing and holding onto a golden skull for as long as possible. Finally, there’s a checkpoint-style race mode which turns out to be a horrible, frustrating ordeal in the game’s tiny battle areas. But at the end of the day, it’s mostly about destroying as much stuff as possible in an allotted amount of time, which in an idea world, should be fairly entertaining.

The zombie-killing events are straight forward, with the winner being the one who can massacre the most undead, either through the use of weapons or simply by running over them with a vehicle at top speeds. It’s strangely cathartic, and so utterly brainless that it’s enjoyable enough for what it is. The only real strategy here is to drive around to areas where you’ll find a large crowd of zombies and fire aimlessly at it as you barrel your vehicle in its direction. If there are any real complaints here (outside of the fact that many will find it completely mindless to the point of tedium), it’s that there simply aren’t enough zombies on the screen. The game appears to randomly spawn crowds of the ghouls, so even if you clear an area, you can always circle back later and find more. Even still, I spent far too much time driving around deserted areas than I would have liked, especially once the zombie-crushing bug had bit me. 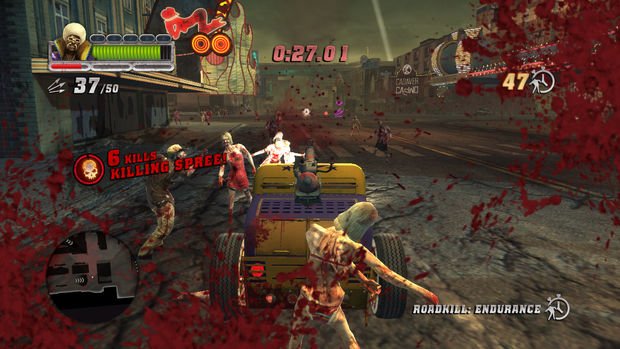 “Demolition Derby” is the game’s car combat-focused event, where players pepper other drivers with a variety of weapons — saw blades, machine gun fire, rockets, and more — and even smash right into them to drive the point home. The biggest problem here is that while most damage is done with weapons, they seem to be in short supply across all arenas. While power-ups like repair kits and speed boosts are plentiful (seriously, they’re all over the damned place), there are far fewer weapon pick-ups.

As you can imagine, this becomes an issue in a game where the focus is on car combat; the keyword here being “combat.” Hearing the sound of the clicking, empty barrel of a weapon as you drive around searching for replenishment (mostly finding the aforementioned speed boosts and repair kits) is beyond irritating. It certainly helps once you’ve learned the lay of the land, but the dearth of steady weapon access in a auto-combat game is bewildering to say the least.

Another of the game’s modes, “Checkpoint,” just serves to highlight the game’s other glaring issues — confusing, cluttered arenas and wonky, low-gravity car physics. In this mode, players are given a finite amount of time and asked to hit checkpoints, indicated by arrows and circles on a mini-map. The issue here is that maps are so uncomfortably confined and sometimes so confusing that it’s far too easy to miss checkpoints, or sometimes drive in the direction of a dead end instead of your destination. This issue is compounded by the fact that any time your car suffers a crash — whether it’s from another driver or a wall — it gets tossed in the air, and seems to slowly float back down to its wheels. All the while, the game’s AI (which knows exactly where it’s going at all times, of course) pulls ahead of you, and the chances of catching up in these cases are slim to none. 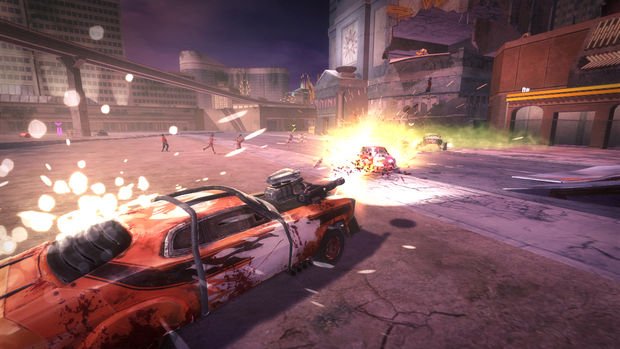 The game’s main single-player mode is a tournament that consists of various cups, all of which consist of repetitive variations of the game types I’ve already mentioned. That big issue, the monotonous nature of the events, is compounded by the fact that some of the later cups can last close to three hours a piece. While it’s possible to back out halfway through a cup and return to whatever event you left off at, this still doesn’t take into account the possibility of not qualifying at the cup’s conclusion.

In Blood Drive, it’s first place or nothing. Coming in second or even third place won’t open up the next area of the game, so it’s all the way back to square one. This is frustrating even in the game’s second cup, which consists of only four events. Consider how hard and far you’ll toss your controller when you realize at event 32 of 40 that there’s simply no way you’ll succeed. Simply put, Blood Drive doesn’t do anything interesting enough to justify monopolizing three hours of your time, and it’s almost insulting that the developer would ask the player to even consider it.

Now for all of these frustrations, Blood Drive isn’t without its “charms.” It seems intentionally schlocky enough that it works, with an announcer that shouts things like “Go fucking nuts!” and calm acoustic guitar that plays during the pause menu, a hilarious contradiction to the game’s cliche rock and metal soundtrack. Blood Drive’s premise of arena-based automobile combat meets zombies may seem passé, but the game wears its intentions on its sleeve, so there should be no confusion on the player’s part — they know exactly what they’re getting into. 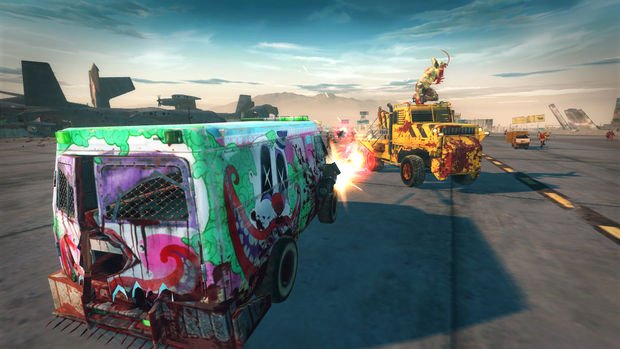 Blood Drive also features a basic online multiplayer mode that’s about as no-frills as it gets. Choose an arena, choose the game type, and have at it. It also only supports a meagerly four players online, but don’t concern yourself with that number, because chances are you won’t be able to find a single other person playing the game. I certainly wasn’t, and therefore wasn’t able to test this mode for the review. And given that there are fewer than 1000 people ranked on the game’s leaderboards for its “Challenge” mode, it’s probably safe to say finding other players is just going to get more and more difficult.

As a rental, Blood Drive might be a nice weekend diversion for folks whose ears might perk up at the very mention of “zombies” and “car combat.” Sure, its flaws can be frustrating and its tournament mode may be one of the most taxing endurance tests in gaming since Rock Band’s “Bladder of Steel” Achievement/Trophy.

Still, it’s not the worst thing on shelves right now, but its $49.99 price tag isn’t doing the game any favors, either. Maybe as a deep discount title or even a digital download with some of the game’s more frustrating modes stripped out (let me run over zombies for ten bucks!) Blood Drive might have been a more attractive proposition. As it stands, picking up copies of Twisted Metal and Dead Rising 2 is a better bet if you’re looking to scratch this particular itch.