There is a trend with a lot of modern puzzle games and platformers to have hectic gameplay, and to punch you in the balls while you play. This might seem awful to some, but most gamers gladly accept this extra challenge.

The feeling of beating something that is insanely hard is extremely satisfying. Super Meat Boy is a recent success that brutally murdered you and then laughed at you. Blocks That Matter also follows this trend with perfection, and it is a delightful exercise in how to enjoy masochism. 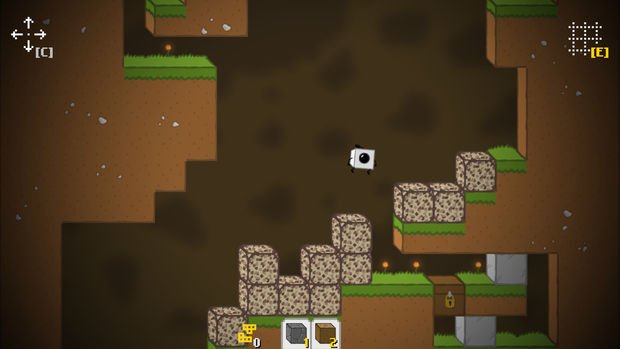 Blocks That Matter is a 2D platformer with adorable graphics, tight controls, and a fantastic soundtrack. It doesn’t start off hard. It eases you into the mechanics slowly and carefully. It’s all really simple: You are a tiny robot who must collect blocks, and then use those blocks to build things. Different blocks have varying characteristics: sand will always fall down, wood can burn, and you can’t drill through obsidian.

At first, you can only collect certain block types, and you’ll be able to drill more for collection as you progress through the story. Once collected, you have to place blocks four at a time, which can make progressing tough. You might have to destroy some of what you just built so you can reuse those blocks later.

It’s a beautiful hybrid of elements from Tetris, Minecraft, and Super Meat Boy, all blended together with perfect indie charm. While those might sound like weird games to combine, after playing it for five minutes you’ll definitely spot the resemblances. It’s all done in a way that doesn’t make it feel like a clone, but rather an homage to those great titles. 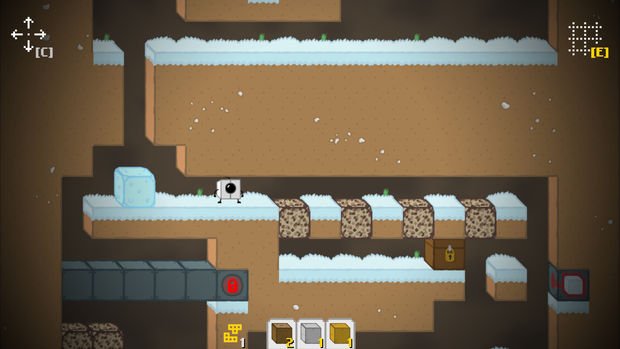 It’s mostly platforming, and you can collect blocks by drilling them. At any point, you can pause the game and enter a building mode, and anything you create will appear instantly after you unpause. The first half of the game is rather slow-paced, and you can take as long as you want. Later on, you’ll be running from flaming creatures, and jumping on blocks that collapse if you stand on them. Sometimes, you might have to jump into the air, and then build something to land on.

It’s not really story driven, but it’s written better than most games, and you’ll find yourself liking the few characters that the game has. You were created by a couple of indie game developers, Markus and Alexey. They were just kidnapped by a mysterious person known only as “The Boss,” and it’s up to you to save them. The two indie devs are based on Markus Persson and Alexey Pajitnov, the creators of Minecraft and Tetris, respectively.

The story mode lasts for about seven hours, and you can replay all of the levels to earn stars for completing it more efficiently, and each level has a collectible block that you can find. These blocks are from famous block-based games like Boulder Dash and other familiar titles. Once you’re done with the story, there are also bonus levels that you can play, which are extra challenging. 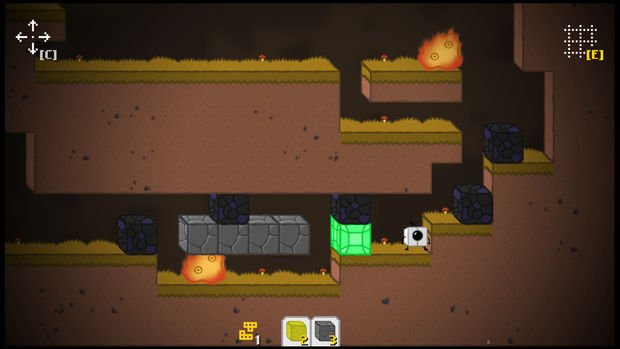 I found myself yelling at my screen in frustration, crying for mercy, and the entire time the game would not let me give up. The solution was always right there in front of me, dangled like a delicious carrot. It’s a difficult game, but not impossible. If you crave an insane challenge, there’s plenty of bonus content to test your nerve.

For five bucks on Steam, this is a hard one to pass up if you like puzzle games. I had a ball playing it, and seven hours passed without me noticing. I recommend Blocks That Matter to fans of blocks, and just about anyone who loves indie games.