As a four-on-four team fighter with limited content, Bleeding Edge has its work cut out for it.

Ninja Theory’s third-person PvP brawler has drawn a lot of comparisons – and also a lot of skepticism. It’s the kind of game you can download with Xbox Game Pass and enjoy for a week, without question, but does it stand any real chance of sticking around long-term? I’m already expecting the worst given the scope of the game, the release timing, and all the other projects Ninja Theory has coming up next.

In the meantime, though, it’s neat. The hero roster is surprisingly out-there and versatile, the melee focus is a pleasant change of pace for people who are burned out on Overwatch, and the hazard-filled maps can lead to brutal trap setups involving high-speed trains, electric walls, and missile barrages. 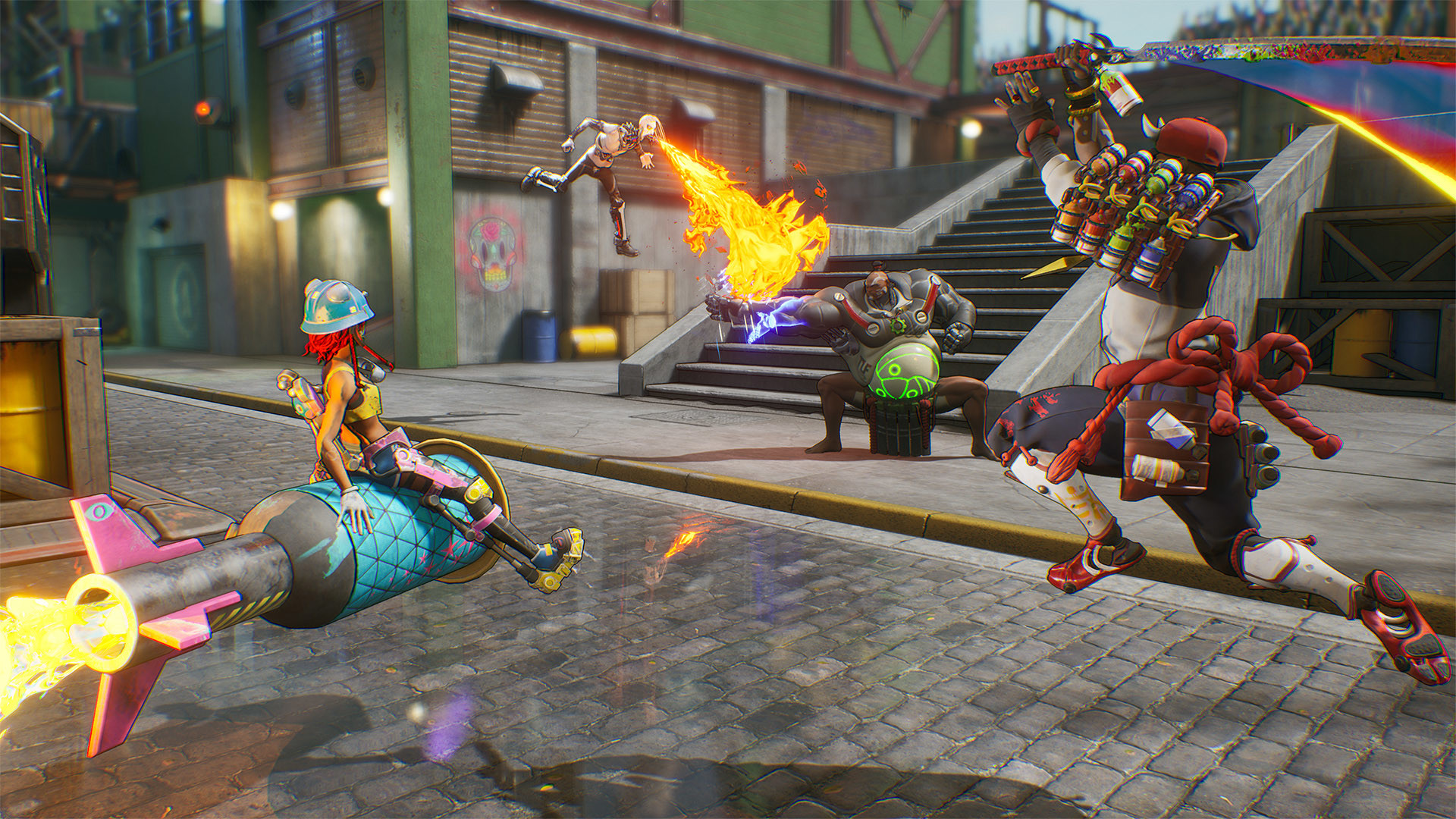 I’m in a weird place with Bleeding Edge. Many of you probably will be too.

I like this kooky game more than I expected given the premise (and my growing hero-shooter fatigue), yet I’m torn about the overall package. In some areas, the development team is clearly punching above its weight. In others, it feels like the creators had to scale back their vision. It’s pretty bare-bones.

Let me set the scene. You’re ideally going to play through a few quick but crucial tutorials to grasp the controls, watch a video that vaguely sets up Bleeding Edge‘s quirky cyberpunk world, maybe read a character bio or two, and then practice your bestie’s abilities against programmable AI bots in the dojo. After that, you’re looking at matchmaking with two modes across five maps, minor progression unlocks involving equippable mods that alter each hero’s ability stats, and rudimentary alternate outfits.

That’s the reality of the situation. You have to fall in love with at least a few characters on the eclectic roster, most if not all of the arcadey arenas, and both game modes if you’re ever going to stick with Bleeding Edge. There are 11 heroes at launch, with one more – Mekko the dolphin – coming soon.

My favorite character, Kulev, is a dead voodoo-loving Cambridge professor whose “soul was digitized” and inserted into a poisonous robot snake – or something like that. It’s a blast to toss last-second shields on a teammate (or myself), throw down an area-of-effect healing/damaging ward, and curse a high-priority foe so we can quickly take them out of the equation. Hey, someone’s gotta pick Support.

My next-favorite fighter – to play as, not to look at! – is El Bastardo. I can’t stand his aesthetic (a complaint that extends to a few other Bleeding Edge inhabitants), but it’s so much guilty fun to leap-stun and tornado spin with dual machetes to accumulate lots of self-shielding in a chaotic crowd.

Did I mention there’s a cyber-witch who can cage enemies and siphon their life force? Well, there is!

Bleeding Edge‘s brawler combat can be hit-or-(literally)-miss depending on the match-up, and I can’t over-stress how important synergies are to not only winning, but your enjoyment. If your team doesn’t work as a group, the opposition is going to wipe the floor with you. It’ll seem absurdly one-sided.

Both of the modes are objective-based. Objective Control involves capturing control points that activate and deactivate at regular intervals, and some of them are placed near devious environmental traps, which I adore. Power Collection is similar, to an extent, but it has a different flow and far more tense vibe. This mode is all about grabbing, hoarding, and finally depositing nodes on a strict timetable.

Generally speaking, you’ll need to stick with your group to survive at any given moment, and that goes double for contested objectives. Most of the melee-centric heroes have simple multi-tap combo strings, and ranged heroes rely on holding down the attack button to fire off shots. In both cases, there’s auto-aim (to the nearest opponent), though you can manually lock-on with the left trigger and swap targets.

If you aren’t the best shot in hero shooters but you enjoy juggling ability cooldowns, working out team positioning, and prioritizing threats, you might dig Bleeding Edge. In the heat of battle, I sometimes struggled to switch my lock-on target as intended or hit the wrong teammate with a life-saving support buff, so it’s not totally foolproof, but it works pretty well. Combat abilities are flashy and just chaotic enough that you can usually grasp exactly who’s doing what, and when, and who’s affected.

Movement also plays a major role. You can dodge using a stamina bar that refills its “charges” over time, and dodging – along with a very basic parry mechanic that I’m not super into – is the main way to escape combo attacks. You can also “mount up,” MOBA-style, and zip to objectives on a hoverboard.

The maps are reasonable – not too big, not too small – so there isn’t much downtime after respawns. 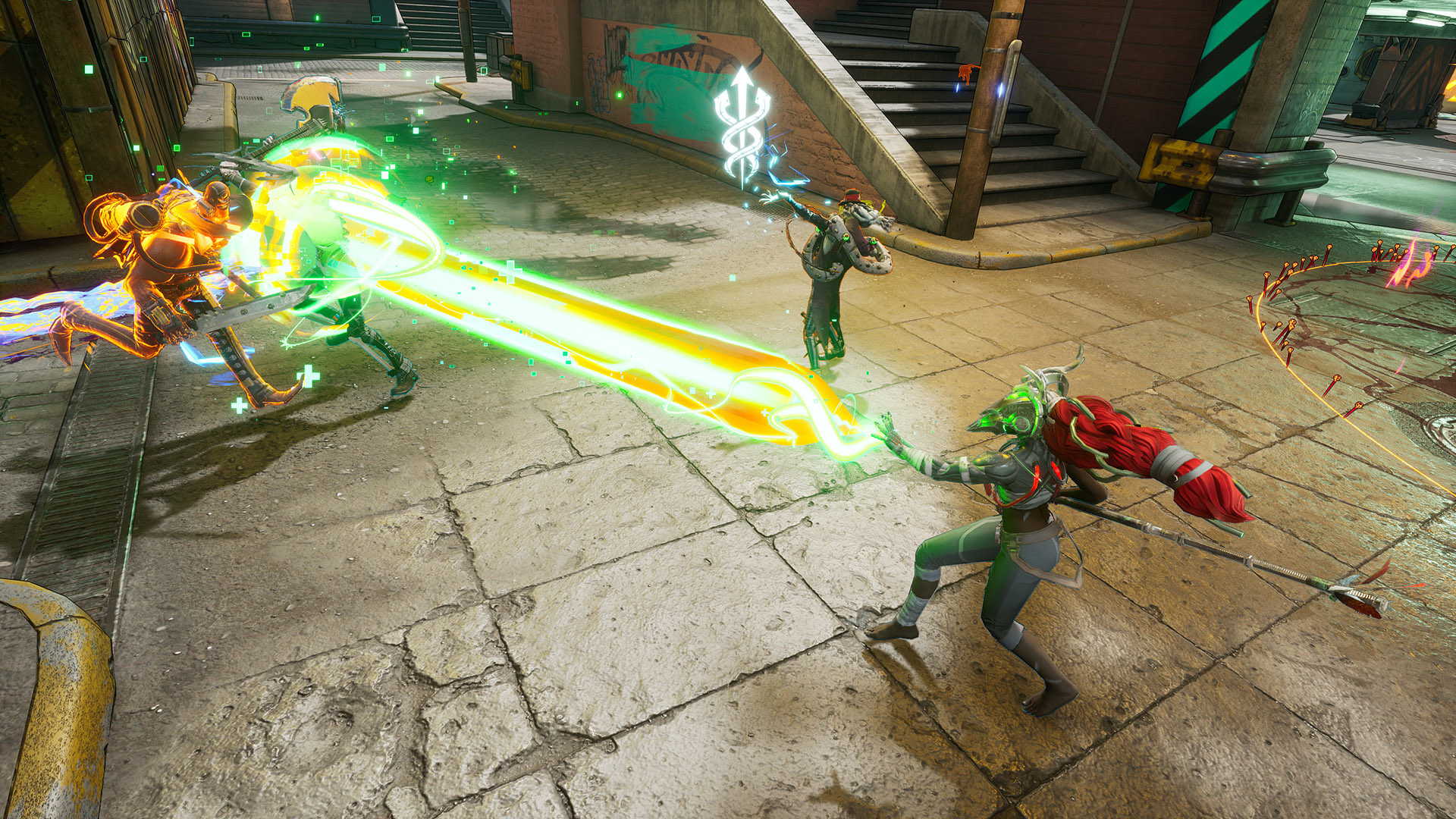 If anything I’m describing sounds cool, it is – or it can be. Bleeding Edge isn’t some throwaway game.

I just wish it had way more depth. I have nitpicks here and there with balancing, good-but-not-great netcode, uneven matchmaking, a lack of matchmaking options, a poor sense of progression, and wishy-washy targeting, but the main criticism – the thing that kills it for me – is a lack of longevity. I genuinely think most players are going to have their fill of the arena brawls in five hours or less. I know I have.

There’s a decent multiplayer action game concept buried in here, absolutely. Some of these characters deserve to live on in future projects. At the same time, it feels like there are only so many team dynamics to experience. It’s all too fleeting. Once you’ve hit that point of no return, there’s no real motivation to continue. I’d like to pick this back up one day, but realistically, I don’t see that happening.

If you’re even remotely interested in Bleeding Edge, play it now while the matchmaking is still lively.