My hands are tired. My right hand in particular is a numb, unresponsive mass of flesh and bone that refuses to do anything I tell it to. I blame Bleach: Soul Resurreccion, a new cut-’em-up that requires some serious button mashing. I have mashed those buttons for a couple of days now for this review. And now I have to type?

Soul Resurreccion is one part anime license and another part one of those 1-vs-100 action-adventures, something like the Dynasty Warriors series of games. There’s some solid gameplay and lovely art here. But what if you don’t know squat about the Bleach anime?

To be fair, I know a small bit about the Bleach anime. I watched about a season of this hugely popular manga-turned-anime, which aired on Cartoon Network. But I lost track some time ago. I know just enough to know who the game characters are and I know just enough to appreciate the game’s high-end graphics.

The rest of the story? I was totally lost from the very first story section in Story Mode. This game assumes that you’re current on the anime. If you’re not you’re going to get blasted with several paragraphs of Spanish-tinged proper nouns that will leave you scratching your head. Bleach: Soul Resurreccion makes no apologies and pushes further ahead in each Story Mode section, hitting you with text and narration each time. It only took about 5 or 6 missions before I was mashing the button to skip the narration to get to the gameplay. 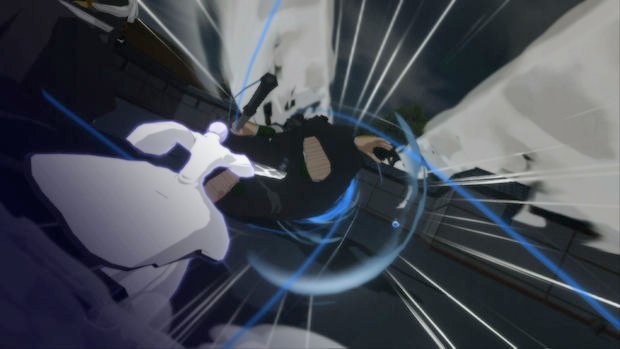 The gameplay is something that feels a lot like a Dynasty Warriors game, and that’s a good thing. You’ll jam on face buttons to perform weapon attacks and combos, and work up meters to blast out special attacks. Mowing through countless masses of enemies is just as fun in this game as it is in any other of its type. At first. This title is packed with several playable characters straight out of the anime. Some of them have varied types of attacks, like Ichigo’s sword, or Ishida’s bow and arrow, but that wasn’t enough to keep things fresh with all of the enemy mowing. I quickly fell into a rut of starting a new stage with a new character, mashing attack buttons to progress, fighting a boss, and then repeating. Slashing baddies looks and feels great at first, but when that’s all you do, it starts to wear on you.

There are a few things to break up the slashing, though. The boss battles provided a stiff challenge. Bosses of varying sizes, shapes and backgrounds come straight out of the anime to mix up the action for you. Unfortunately many of the smaller bosses are weak to the same exploit — simply mash your standard attacks when they’re down, timing them so that they’ll hit at the exact time they stand. Too easy. 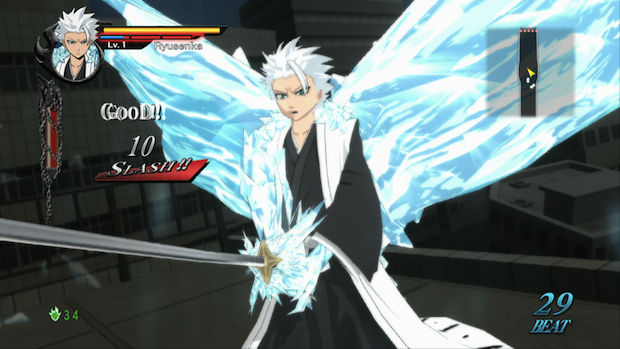 The game’s character leveling system is also nicely structured. While fighting normal enemies in the stages of story mode you’ll earn soul points that you can spend in character maps. In these maps you’ll add to stats, unlock abilities and add enhancements for the character that you choose. It’s too bad that these characters are overpowered to start with. Because they’re too powerful there’s almost no incentive to even bother leveling up for anything outside of being curious.

It all looks nice, though. Bleach: Soul Resurreccion is a very pretty game, packed with cel-shaded graphics that look so much like the anime that if you squint, you’ll swear you’re watching an episode. Even the most minor of enemies sported top-notch cel-shading and slick animation. Some of the bosses, especially the bigger ones, were very impressive in scale, design and animation. Cutscenes also looked very nice. Fans of the anime will definitely love how this game looks, that’s for sure. 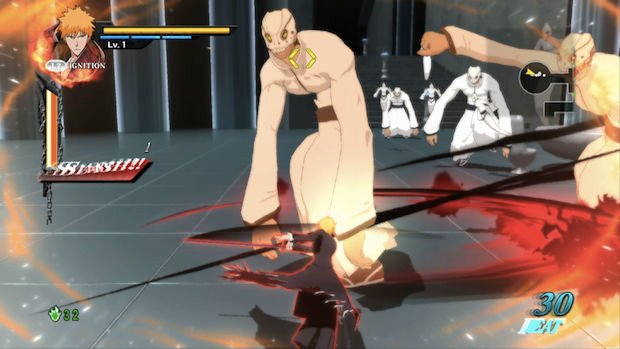 All this said, I had a fairly good time with Bleach: Soul Resurreccion. I never really knew what was going on in the story, and the button mashing destroyed my hands, but it was an enjoyable, mindless romp in a really pretty anime world. If you approach this game as a fun couple of afternoons of slashing through baddies and trying out special moves, you’ll likely enjoy it, but don’t expect much more than that from this title. Fans of the anime might want to give this a spin. If nothing else, they can see all the series characters cel-shaded in glorious HD. Beyond that there’s not much here.