Remember that classic racing game Ivan ‘Ironman’ Stewart’s Super Off Road? You know, the game where you race tiny trucks across dirt tracks while using turbo boosts to catch some sick air over bumps in the road.

BlazeRush is like that, only with slightly better controls, online multiplayer, and Oculus Rift support. Too bad it is just plain boring. 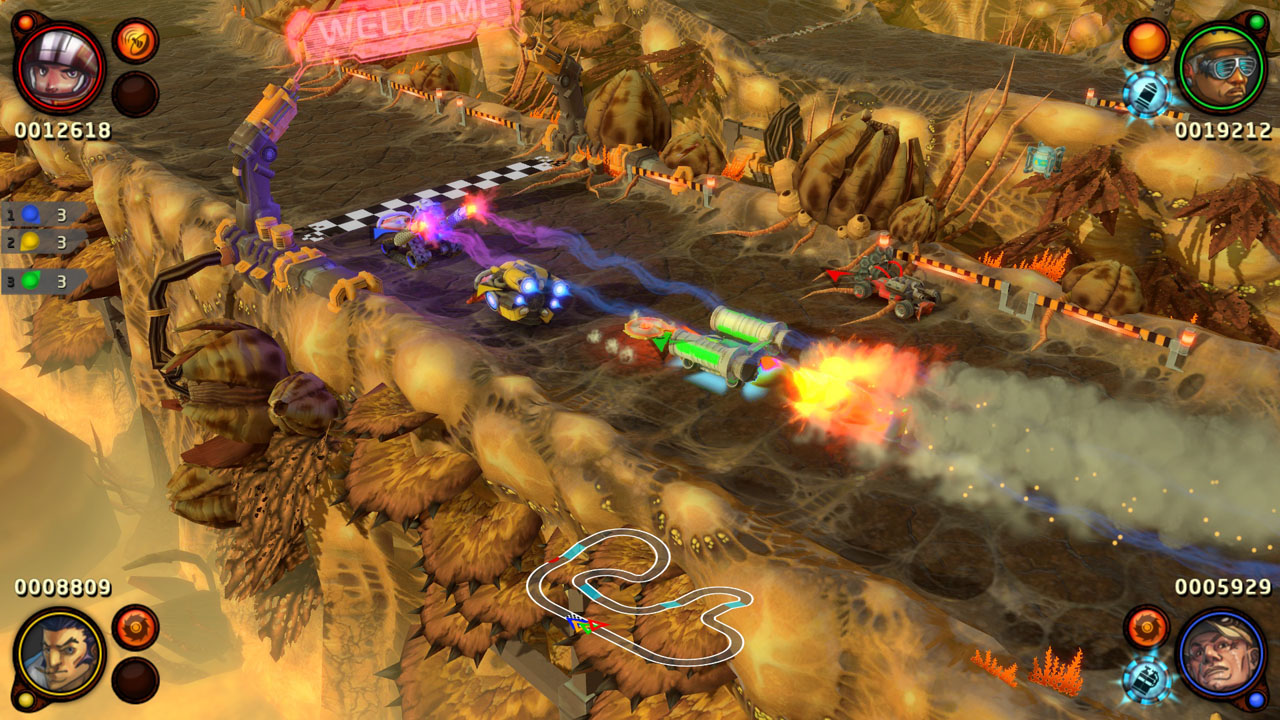 BlazeRush is an unremarkable combat racing game where you’ll be zipping around a track picking up boosts and weapons as they materialize from the sky to attempt to win the race. Weapons range from short bursts of machine gun fire to homing rockets, to ooze that slows cars down. If you fall too far behind in BlazeRush, you’ll either be automatically warped forward or crushed by a stream roller if in the death race mode.

Warping forward is easily one of my least favorite ways racing games create a challenge or keep players in the race. Not only do you get warped ahead when trailing, but so does the AI, meaning they are always right on your tail. While this keeps the races close and somewhat exciting, it also defeats any real purpose of skill. Much like Mario Kart a single hit with a weapon near the finish line means you’ll lose, but at least in Mario Kart, you have a chance to get far enough ahead that it doesn’t matter.

This randomness means that when playing the single-player mode, you’ll be playing the same races over and over again until you perform well enough to unlock the next set of races and move on. That wouldn’t be such a problem if the events weren’t all nearly identical. The story mode slowly, and I mean slowly, introduces you to each boost and weapon in the game through a series of tutorial and events. While these can be races, time trials, the King of the Hill mode, or Death Race, they all still feel like tutorials. A majority of the game ends up feelings like a tutorial in general.

Towards the final bit of story mode the difficulty ramps up because I guess that is what has to happen in every video game, or else it isn’t a video game. Once you perform well enough, you’ll come face to face with a final boss that you must take down in a race for an anti-climatic finish to a story I couldn’t be bothered to pay attention to, as it is told through one or two sentences of text at the start of races. All I know is it had something to do with taking down a galactic corporation. Not original or interesting.

The actual racing is not bad, but not great. Instead of something like the ridiculous tank controls you’d find in some classic top-down racing games, here your care moves in whatever direction you hold on your joystick, no need to press other buttons. Boosting over hills and attacking enemies with weapons is certainly fun, especially when you knock them off the track causing them to explode. King of the Hill has you racing to keep the lead for 50 seconds, which is fun but rarely a close race. Death Race is more of an elimination type race, where you’re awarded points for each person you outlive in a series of starts while running from a giant steam roller. Death Race is fun, but in the later races, the CPU will often get ahead pretty quickly which causes the steam roller to move faster crushing you unless you got lucky and grabbed a boost.

BlazeRush is the first game I’ve finished on my Oculus Rift virtual reality headset as it is one of the more simple experiences that came highly recommended from other owners. Suffice to say the game certainly benefits from VR, as it looks like the tracks and cars are right there in front of you. Turning your head to see the upcoming track or look at the racers behind you is something I’ve never experienced in a game till now. I did, however, have some issues with the VR integration such as the game always displaying too close to me causing me to have to move physically back a few more feet than other games would have me sit. I also found myself looking down at an angle a bit more than I’d have liked, which doesn’t feel great on the neck.

That said BlazeRush is easily recommendable as one of the experiences to show off your fancy new toy if you get a Rift. It certainly has that initial “wow factor” even though it isn’t the kind of game that comes to mind when most people think virtual reality. It just isn’t an experience I can recommend for gameplay as it leaves much to be desired; such as people to play with online, as there were none.