It’s been tough for me to get into BlazBlue.

My first ever Arc System Works fighter was the original Guilty Gear, and I’ve been a believer ever since. When BlazBlue rolled around 10 years later a lot of my crew was already invested in Sol and their crew, and didn’t have days to spend in the lab learning the ins and outs of his kinda-sorta counterpart, Ragna.

But ever since Central Fiction was announced, I vowed to give it a real shot and fully immerse myself in its world — replaying each story and learning the basics of every character. It paid off, because Fiction really is a big sendoff for fans. 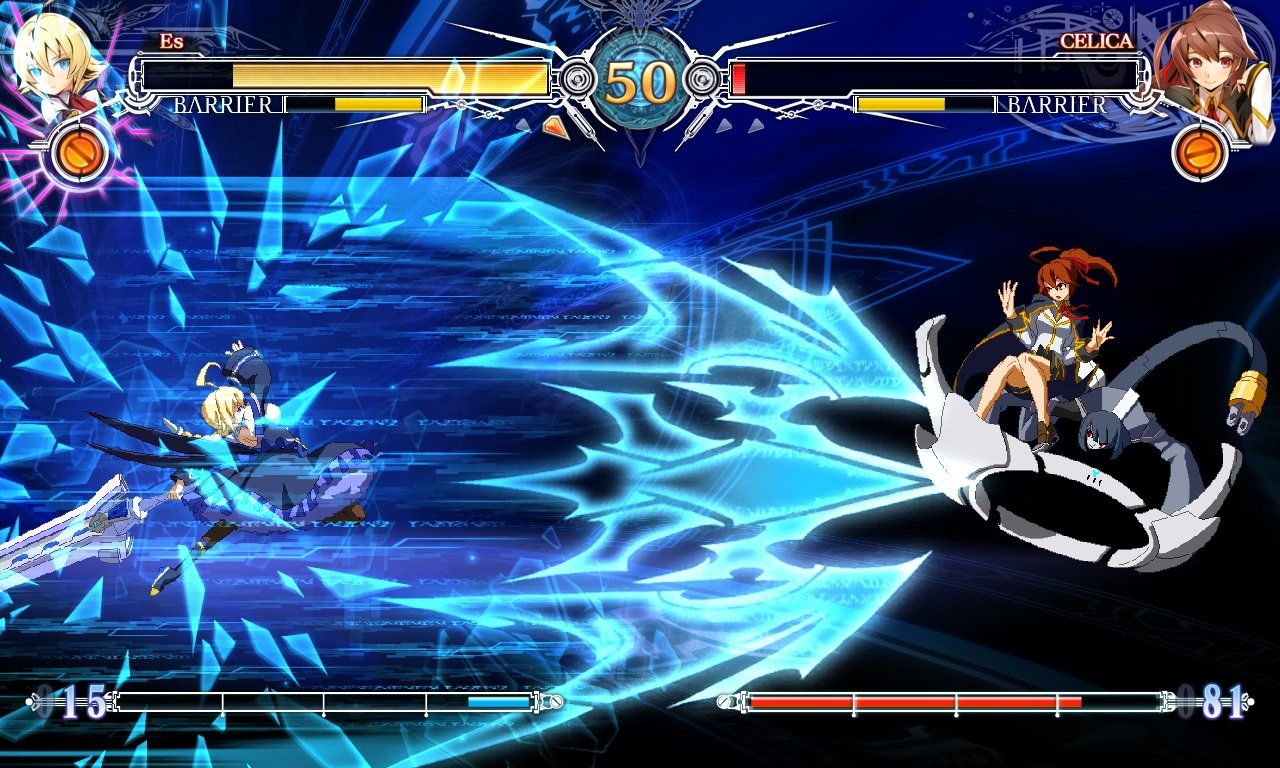 After all this fanfare the real question is whether or not Central Fiction delivers an end to the narrative, something fighting game franchises rarely, if ever do. And having played through it and the subsequent side missions, I’d say it does. Centering around Ragna the Bloodedge and a mysterious entity called “The Embryo,” Fiction relies a bit too heavily on the “amnesia” trope for my liking, but quickly turns it around with an appropriately juicy and action-packed, drama-filled arc.

Really, it has the added bonus of being an actual story mode and not just a glorified arcade gametype. There’s lots of character interaction, hours of dialogue, and plenty of real slice of life type scenarios beyond the relatively serious big picture. It can get dark or silly at the drop of a hat, and playing through it really is just like watching a fully fledged anime season. Note, however, that they never did settle that English dub situation, so all you’re getting is subtitles for the western edition.

But given that this is going to be a lot of folk’s first BlazBlue game, is it worth the investment? I’d say yes. I mean, you’re going to be lost — let’s not beat around the bush. In fact, if you want a recap of the story so far, the game even warns you with a separate menu prompt stating “warning: this will run at least 30 minutes in length, do you wish to proceed?” Fiction isn’t screwing around at all, and even with some over-the-top clarification, you’ll still probably be confused unless you read several recap efforts.

The good news is a lot of that is built in, including a dictionary with literal hundreds of entries to flip through. The delivery system is convenient too, since you can skip cutscenes, or alter the text scroll speed to “instant.” And all the while you’ll enjoy some incredible art, and a wonderful rockin’ and beautiful soundtrack that feels appropriately sci-fi.

Combat is as smooth as ever with its three-button system and the “Drive”concept. Not only is the Drive button conceptualized as the “soul” of a fighter for lore purposes, but it’s also a go-to move button that can be manipulated by directional inputs for more variation. Some characters are utterly defined by it (allowing one to cycle through elements for instance), and others are augmented by it. While there is an “Easy Automatic” setting for casual players that simplifies everything, the Drive moveset in general is a good middle ground that still provides a lot of complexities for hardcore fans to toy with.

Central Fiction also adds in the concept of doubly discouraging turtling, by enhancing your Burst Gauge and damage output with the Active Flow system. In other words, if you guard or run away a lot, your meters will drop, just like in the past (and in Guilty Gear). But if you’re overly aggressive, you’ll now reap the benefits in Fiction twofold. This funnels into the new Exceed Accel move (of which every character has one), which does extra damage if you’re in Active Flow. They’re small additions, but welcome ones that fit naturally within the confines of what BlazBlue is trying to accomplish. 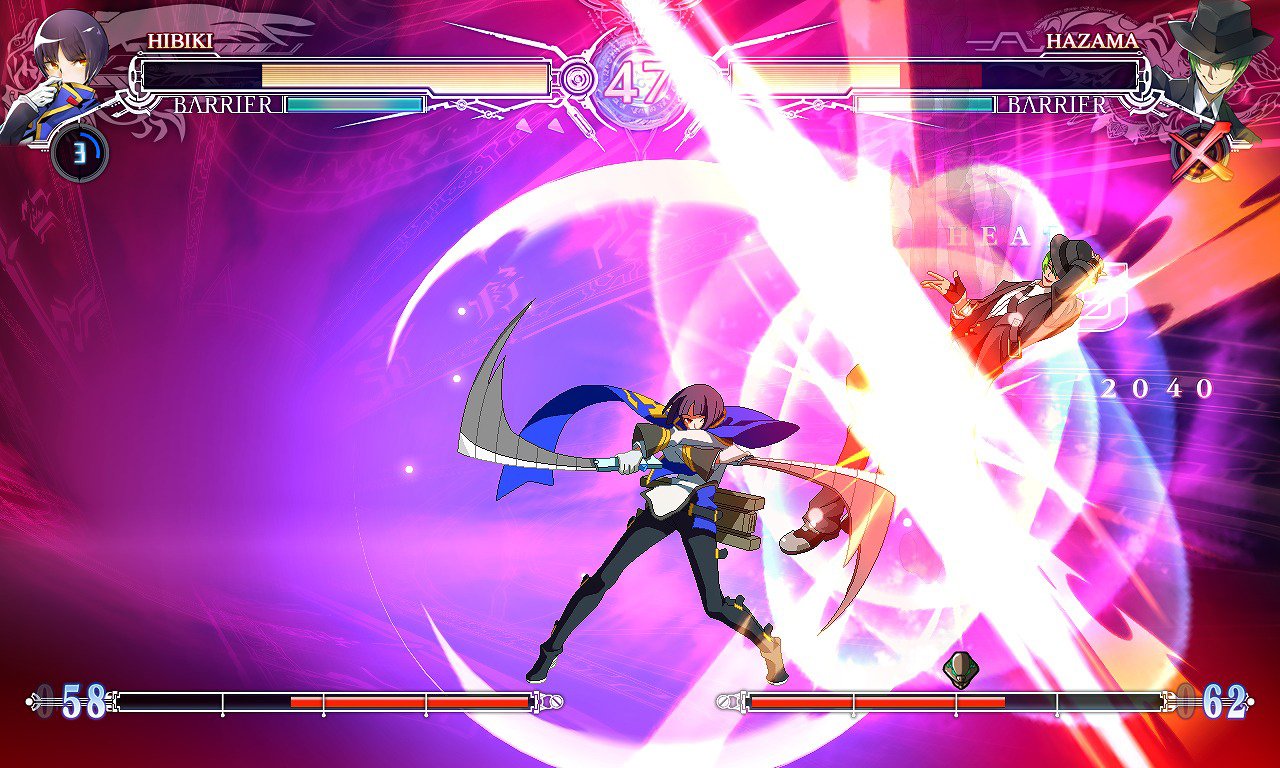 Beyond the already impressive campaign, there’s multiple challenge modes (including the multi-tiered Grim of the Abyss, which is reminiscent of the Bloody Palace from Devil May Cry or the Dark Realm from Onimusha), in-game cash to earn for new colors, and a little home-building system for online lobbies. It’s not nearly as cool as Revelator‘s world lobbies that sport the fishing mini-game, but it’s the next best thing, complete with adorable little chibi avatars and 32-person lobbies.

There’s also seven new characters (two are DLC and one is an unlock), my favorite of which is Hibiki. He’s a lightning-quick fighter that utilizes a clone-based Drive attack, allowing him to either swap places with the clone or send it off as a projectile of sorts, giving him a sick amount of mixup potential (plus I’m a sucker for characters with full-screen punishes for casual matches). Naoto’s fisticuff monk style and Hades’ zoning abilities are a little too familiar and fit nonetheless, but Nine’s witch design is classic Arc, and she comes equipped with an eye-opening elemental skillset — different stocks to use and micromanage out of the corner of your eye. She’s stylish as hell, all the way down to her teleport dash and witch hat.

If BlazBlue: Central Fiction is the end (and I don’t think it will be), it’s a fitting one. It packs in pretty much everything past games have offered, and then brings in several great new characters and one of the biggest stories in fighting game history.