Despite being only two games deep, the BlazBlue series has a rabid fanbase, and with every rabid fanbase comes spin-offs. That’s not necessarily a bad thing. If a top-notch series can branch out into new genres, while retaining its soul and original level of quality, it can work to expand brand awareness and strengthen the series as a whole. It can also be a lot of fun.

That’s what I was hoping to get out of BlayzBloo. That’s not really what I got. 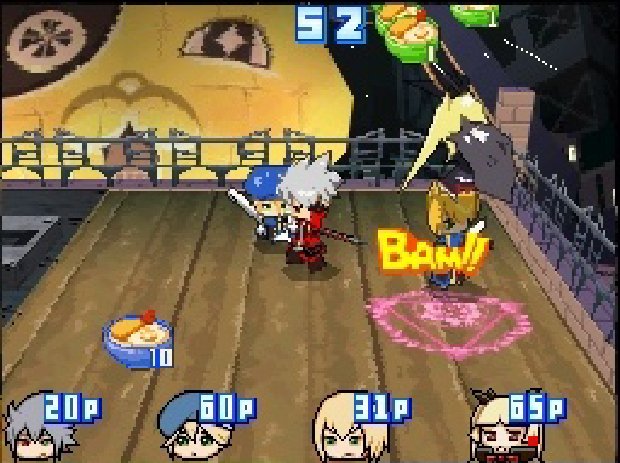 BlayzBloo is yet another game that suffers from a mismatch between player expectations and developer standards when it comes to a cheap, download-only title. It seems that Arc System Works figured that players wouldn’t be too let down if there wasn’t much to this $5 DSiWare title, and they’d be right. I was not horribly disappointed with BlayzBloo. In fact, in some ways, the game came as a pleasant surprise. Like a lot of DS games, it looks a lot better while you’re playing it than it does in screenshots, and it actually has a few inspired concepts.

That said, I’m still not sure I can recommend that you spend your money here. Just because a game is free doesn’t mean it gets to be small, shallow, and repetitive. DSiWare doesn’t have tons of great games, but there are still a few titles on the service that are cheaper and better than BlayzBloo.

But I’m getting ahead of myself. 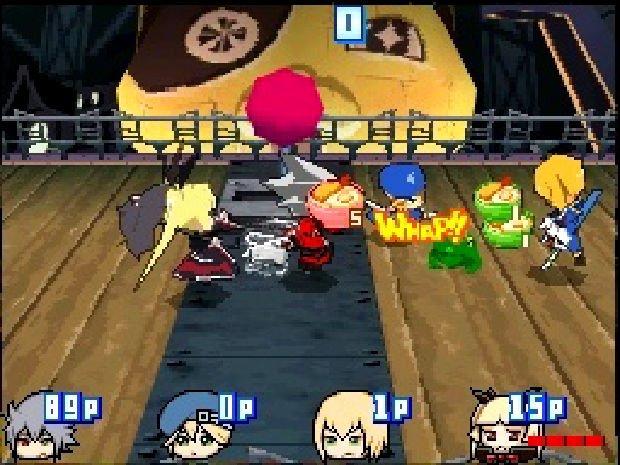 BlayzBloo is a simple 3D fighter that allows for up to four players to fight simultaneously. It reminds me a lot of Power Stone 2, but if that game were much more shallow. For the most part, BlayzBloo lacks Power Stone 2‘s better qualities, which include highly interactive backgrounds, a huge arsenal of weapons and items, and the “collect three stones to kick some ass” hook.

It’s the “for the most part” bit that makes the situation so painful. BlayzBloo has two cool interactive backgrounds (Rachel’s and Taokaka’s), but other than that, the stages don’t really affect how you fight. It has a handful of initially interesting and/or amusing weapons (Rachel’s frog and Mario’s Super Mushroom being particularly memorable), but they’re not enough to keep things interesting for long. It almost has a few interesting gameplay hooks (like its invisible capture-the-flag mode), but they only show up in single-player play, and only at random. The fact that the game rarely delivers something great makes the rest of the mediocrity found here all the more disappointing. 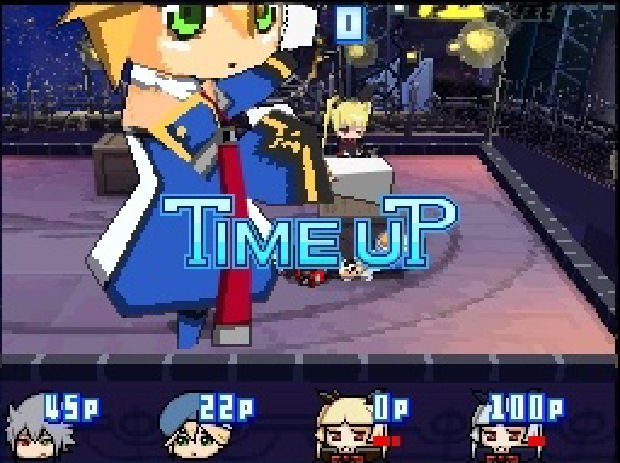 One thing I will say for the game is that they did put some effort into the game’s characters. Rachel, Jin, Ragna, Noel, and Taokaka all move, sound and play a lot like they do in BlazBlue. The game is played with the control pad and four buttons (attack, drive attack, jump, and item), and a lot of moves from BlazBlue have carried over pretty faithfully. Rachel has her wind attack, Taokaka has her dash-n-scratch, Jin can freeze you, and so forth. Although for the most part, these little guys are too small to move too much, I was impressed with the animation on Taokaka’s arm swing, which looks relatively close to its analog in the console BlazBlue games. I’m also 99% sure I heard Jin say “Brother?” while fighting Ragna, though I haven’t been able to get it to happen since.

In the end, I can definitely recommend BlayzBloo to BlazBlue diehards. It’s like buying five BlazBlue keychains for a dollar apiece, except they only exist in your DS, and you can make them fight each other. That will be enough for some people I know. For everyone else, I’m not so sure. If the game had wireless online play, I might be a little more quick to recommend it. Sadly, you can only play versus mode locally, and only with other people who have also downloaded BlayzBloo to their DSi consoles. That means that playing the game with other people could cost all of you up to $20. Suddenly, that cute little throwaway game you bought for $5 isn’t so cheap anymore. 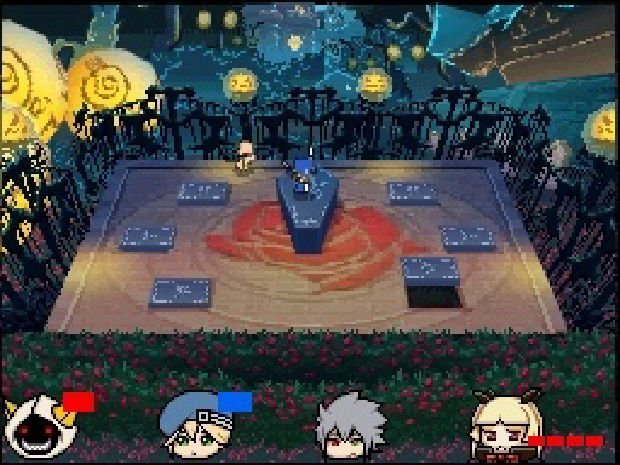 I understand that you can’t pack much content into a $5 DSiWare game, but it’s not a lack of content that’s the problem here. The problem is that the content here is generally uninspired. With a better gameplay hook and some more interesting variables, BlayzBloo could have been a contender. As it stands, the game will have to settle for a…