As a kid, I never owned Blaster Master. My only experience with it was watching my friend’s dad play it one night. It looked far too complicated for me to grasp, so I put it out of my mind and never thought about it again. Flash forward to 2017 and the launch of the Switch, Blaster Master Zero was released and I thought it looked neat. I love retro revivals, so I figured I would take a chance with Inti Creates’ reboot.

Once that music started, I was immediately taken back to that night in my friend’s den. It’s funny how effective certain things can be in our lives, but the music from Blaster Master reawakened that memory in me. I sat there and plowed through Zero in nearly one sitting, being utterly captivated by how faithful it was to its NES roots.

That’s not to say I didn’t have some complaints, but I thought Zero was a solid start to a potential new series. Having now finished Zero 2, I’m convinced this will be a series that sticks around for a long time. 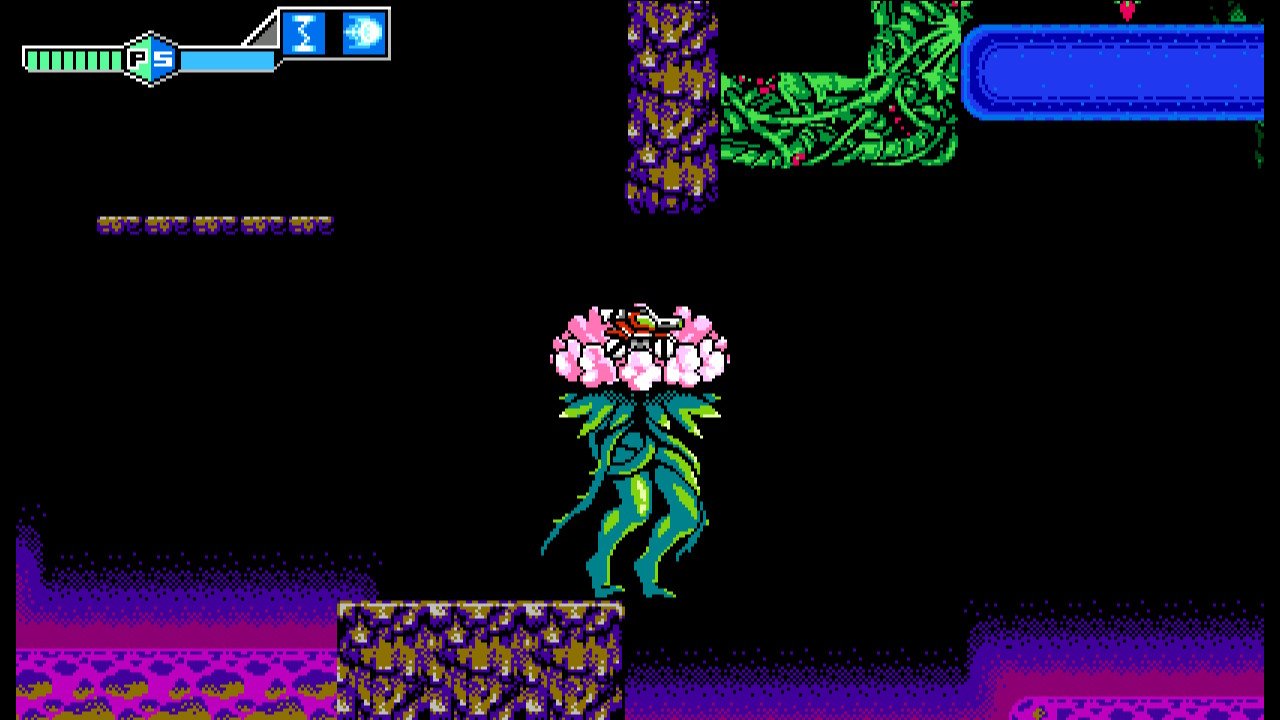 Picking up a few months after the events of Zero, Blaster Master Zero 2 (which is kind of an oxymoron of a name) sees protagonist Jason Frudnick, his pet frog Fred, and co-pilot Eve traveling to the planet Sophia to find a cure for Eve’s infection. During the final battle of the first game, Sophia-III was infected by the Overlord core and this disease was spreading throughout Eve. It’s a pretty dark opening for a game that is mostly full of anime flourishes and generally maintains a light-hearted atmosphere.

In an effort to stop the contamination, Jason was forced to destroy Sophia-III and begin work on a new tank. In comes Gaia-Sophia, which is basically the same model as the original with the ability to travel through space. Utilizing this function, Jason and Eve decide to head to the latter’s home planet and search for a remedy.

Since Jason can’t fly directly to Sophia unopposed, this necessitates him stopping off on various other planets to find upgrades for G-Sophia. Cue the regular formula from Blaster Master. You’ve got side-scrolling levels, top-down segments, and small bits where Jason will need to exit G-Sophia in the main levels.

Zero 2 doesn’t dramatically alter the basic structure from Zero, but it improves upon it with plenty of subtle tweaks. The biggest of these tweaks is that the game leans more into its Metroidvania influences. While you essentially progress linearly throughout the story, G-Sophia’s space travel ability is fully exploited by the devs. You’ll land on the main planetoid and retrieve various keys and maps, which then unlock smaller planetoids where you can search for upgrades.

Each “level,” so to speak, is actually an area that contains the main planet and sub-planets. At one point in the story, you unlock multiple paths that then let you tackle levels in differing orders. Like I said, not a radical tweak to the formula, but enough to give replays and speedruns their own personal flavor. It also gives completionists something to dig into with every area having some kind of item to collect.

The best change is that you’re not exploring the same terrain for the entire duration. Each planet has a different theme and, while that might be a little clichéd at this point, it gives each planet its own distinct style. It helps when backtracking across rooms for the side-quests that are now available (That’s right! Side-quests!). 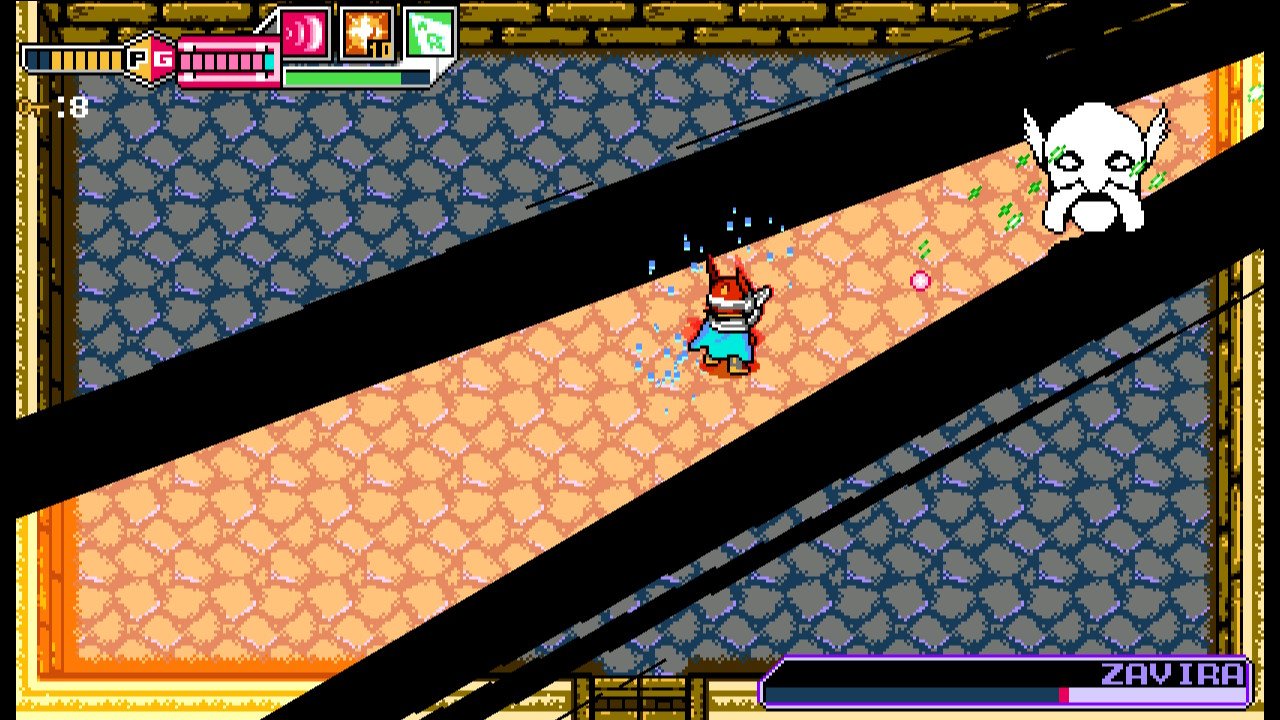 The tweaks don’t stop with level progression. The controls for G-Sophia receive some quality-of-life improvements with the option to map a few abilities to hotkeys. This also applies to when playing the top-down segments, granting Jason instant access to his different gun levels or sub-weapons. While swapping in Zero wasn’t a massive issue thanks to a drop-down menu (which is still here), it’s a huge boon to be able to bust out specific G-Sophia techniques or sub-weapons without freezing for a second.

Another interesting change is the way that G-Sophia’s special meter is handled. Instead of being segmented, the special bar is now a big meter that will deplete by varying amounts based on whatever ability you’re using. To recharge this meter, you have some options. You can grab some of those blue orbs that were in Zero, you can take damage from enemies, or you can land from a big fall. The bigger the fall, the more your meter will refill. This gets you thinking about the verticality of each area to keep your special items flowing. The level design even reflects this, with some areas being flooded and stopping G-Sophia from causing an impact on landing.

Jason isn’t without new options, either. During his top-down segments, Jason gets access to a counter maneuver that he can bust out to unleash massive damage. The game never actually explains how it is used, but you’ll see a reticle close in on an enemy as you get close. This is your cue to press X. As you progress, you’ll unlock different counters that allow you to dash, reflect enemy fire, or unleash a quick homing shot. It gives you a lot of options for tackling foes. 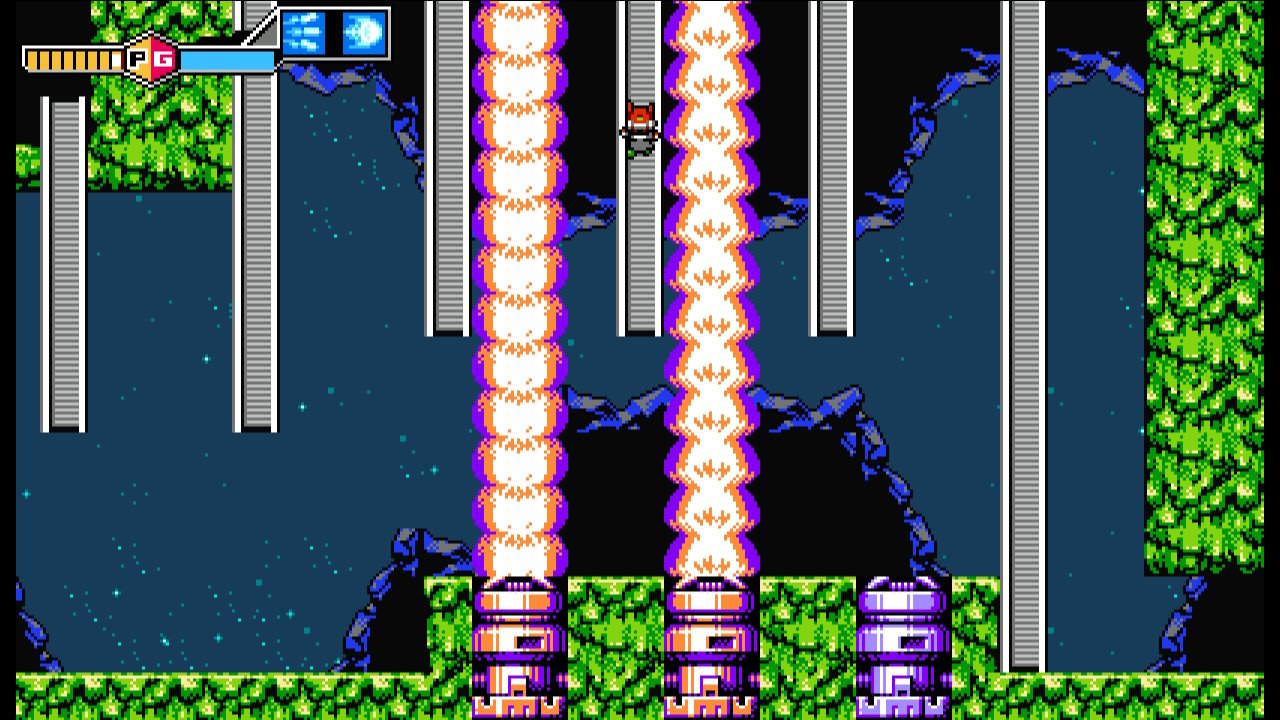 Jason’s extra techniques don’t get put to as much use as G-Sophia’s, though. You could run through every top-down level with the basic starting equipment and have basically the same experience. I do appreciate that the variations of Jason’s blaster aren’t simply “Better gun” like in Zero, but a few of the options seem a bit pointless. I have no idea who will be using the reflector shield, for instance, and the rapid-fire blaster seems too undercooked.

About the only area that Zero 2 doesn’t improve upon from its predecessor is with regards to difficulty. While I’d hesitate to call this an easy game, anyone with familiarity in retro platformers shouldn’t have a tough time making progress. The levels are pretty cleanly laid out, the enemies don’t have egregious amounts of health, and the boss fights are fairly generous with dropping health pick-ups. You’ll die, for sure, but it’s not very punishing thanks to modern conveniences like save points and infinite lives.

That will likely be very welcome to players because the story is actually quite good. While Zero introduced us to the main players, Zero 2 has a whole cast of various friends and goes that you’ll encounter along the journey. By the end, there are even shades of Blade Runner in here with characters talking about how their co-pilots have souls of their own. It doesn’t redefine gaming narratives, but it’s a story that most people will want to see through.

Blaster Master Zero 2 is a clear improvement on its predecessor. The graphics are slightly better, the story is better written, and the soundtrack is more diverse; I could go on and on. Maybe Zero 2 won’t make a convert out of you if you didn’t enjoy the first, but it is well worth exploring for fans of Inti Creates and Blaster Master.