In many ways, I’m very glad that Final Fantasy: Tactics had such a big influence on my tastes. It’s an incredibly well made game and put me on a path towards playing more games of its ilk like Phantom Brave or the more recent Expeditions: Conquistador. Now, it’s brought me to Blackguards.

Blackguards is fantasy, its tactics, and it’s difficult without being unfair. Boy am I glad I played FF:T. 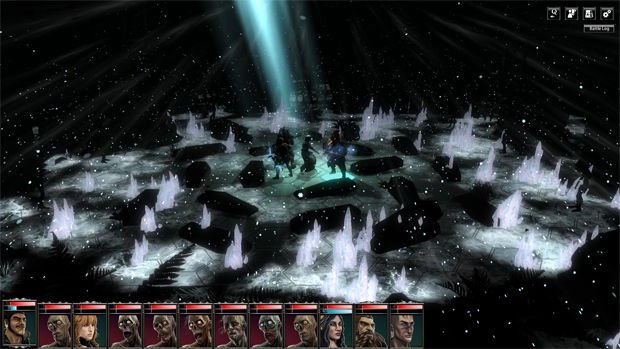 Blackguards puts the player into a fantasy world filled with knights, mages, and a whole assortment of monsters and intrigue. The player and their motley crew of vagabonds find themselves on a quest that is seemingly much bigger than they are. It’s more or less standard fare for a fantasy world, but that didn’t stop me from constantly being excited for what was around the corner. Perhaps it’s because I’m waist-deep in the Game of Thrones novels, but the story was wholly entertaining.

A large part of that is due to the game’s writing, which nails the tone of the game more often than not. Characters feel diverse and lively, even if they occasionally fall into fantasy stereotypes. The voice acting is shaky at times, but the main characters are done well enough to prevent any sort of constant cringing.

The gameplay is the true star of Blackguards. This is easily one of the most satisfying and enjoyable tactics games in recent memory. A lot of it boils down to just how customizable everything is. Regardless of class, every character can be so finely tuned to the player’s preferences that everything feels personal. Stats, weapons, abilities, and gear is completely customizable for every player-controlled character.

All character personalization uses AP, or Action Points. These points are acquired through battle, and can be spent on spells, stats, talents, and weapon proficiencies. Special abilities can also be learned by paying AP to various trainers interspersed throughout the game. Certain moves will only be available from certain trainers, so players will have to wait to get moves like Triple Shot and Hammer Blow, aka the best moves ever.

Battles take place on a hex-based grid. Each character has a certain amount of movement tiles they can travel, after which they can perform an action like attacking, using magic, or perception checks. Characters can also move further than their base movement range by sacrificing their action. It can be a little funky when trying to select characters at times, forcing the player to fidget with the camera just to actually click on someone. Other times, I’ve selected a completely incorrect tile on accident without even knowing it. 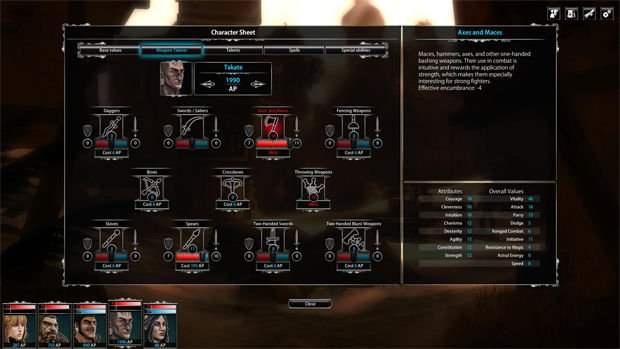 When attacking, the chance to hit will be displayed only if that character has the knowledge required for the enemy type. If a warrior doesn’t have the required skill for humans, for example, the player is in the dark as to how likely the warrior is to make contact. It’s a wonderful way to add some depth to the game while simultaneously making actual sense within the game world. In addition, ranged characters will need a line of sight in order to be able to attack, and their hit chance will go down if there is some sort of cover in the way.

Interactable objects are often scattered throughout the maps and often times are required to complete an objective, though this isn’t always made clear enough. I have had to restart maps a handful of times simply because I had little to no clue how certain objects would affect the fight. This forced me to be way too behind  in the fight by the time it all became clear, so I would just restart the fight instead of wasting time and energy trying to salvage what opportunities I had left. It’s always a good idea to hold the V key as a fight begins to highlight all interactable objects.

Blackguards is difficult, but not cheap or unfair. Just a heads up that players can expect to replay some battles here and there. As a reminder, it’s always good to keep a couple extra save slots when it feels like the plot is building up to something! It’s saved my butt more times than I care to admit. 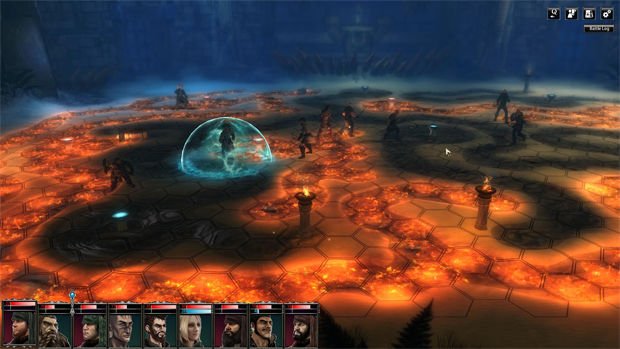 The visuals don’t do anything to stand out, though some of the character and monster designs are nice. That doesn’t prevent the game from throwing a lot of a single enemy type at the player at one time, though. The fights are often up and down; sometimes a fight feels very varied and interesting, while other times battles feel like a complete slog. Unfortunately, the majority seem to fall into the latter half. The arenas themselves, at least, tend to be changed up enough to keep them visually interesting.

The sound effects are often another story altogether. Especially the “ueWAAAHHs’ and “URGHs” that the human enemies make after being struck. They’re awfully loud and more often than not feel disjointed from the actual screaming character. Weapon effects are standard clink and clunks that tend to lack any real weight to them.

Blackguards is a wonderful tactics game with some rough edges. The core gameplay and character progression elements are easily some of the best in the genre, but as battles tend to drag on and more and more enemies scream “owAUGH,” the interest tends to fade. The story is easy enough to follow and interesting enough to keep players interested, so fantasy buffs should feel engaged the entire time. Even if the sound effects weren’t satisfying, the gameplay itself more than made up for that, and it’s easy to see that Daedalic Entertainment has a bright future ahead of them in the strategy sphere.