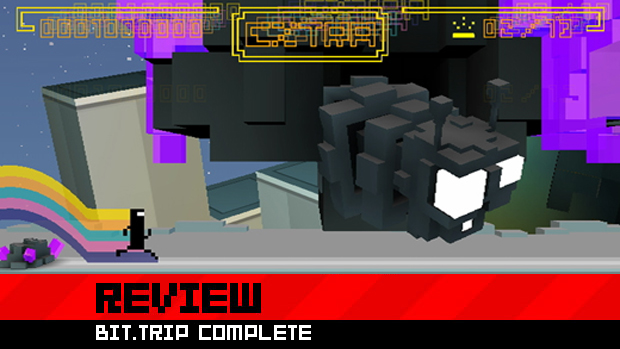 The Bit.Trip titles are some of my favorite games of this console generation. Sadly, the series still hasn’t truly found its audience. Sure, the games have a huge following, but I’m certain that the Bit.Trip series has what it takes to go beyond Katamari Damacy-level popularity to full-on blockbuster status.

The problem is that so much of what makes the series amazing can’t be conveyed with screenshots and videos. This is a series where gameplay is the true star of the show, something that’s becoming more and more of a rarity in today’s motion-capture-focused, Hollywood-chasing games industry. Sure the Bit.Trip series has incredible art direction and one of the most infectious, rhythm-focused soundtracks in recent memory, but it’s the way that the series seamlessly fuses every aspect of the game into the overall experience that makes it all work.

The way the game plays expresses ideas that carry over into the visuals, and those ideas are wholly unified with how the game sounds, with the sound coming full circle and informing how the game plays. Both a love letter to videogames and a bold experiment in gameplay as storytelling, the Bit.Trip series is a unique, expertly crafted force in gaming today.

I’m hoping that more people will find out for themselves how amazing Bit.Trip is now that all the games in the series have been compiled for the 3DS and Wii at retail. Like the title says, this review is for the Wii-specific compilation, Bit.Trip Complete. So without further ado, let’s get cracking!

OK, now that we’re done with all that, let’s get to the specific traits of this Wii compilation.

Getting Wii owners who have bought one or two (let alone all) of the Bit.Trip games on WiiWare to pay for them again at retail is a pretty tough sell. Maybe that’s why Gaijin and Aksys filled this compilation with so much additional content. Along with The Orange Box and the Metroid Prime Trilogy, Bit.Trip Complete offers one of the best deals in retail gaming today. It’s hard not to feel spoiled.

Of course, you get all six original Bit.Trip games in their entirety, but along with that comes a separate soundtrack disc that includes all eighteen main songs from the series. These tracks aren’t just quick, thirty-second samples, either. They are special remixes of each song: loyal to the original compositions, but with a slightly condensed arrangement (to keep each song from being fifteen minutes long) with the occasional in-game sound effect added to make things feel legit. I’d be willing to pay at least $15 for this CD alone, so to have it thrown in for free feels almost too good to be true.

Then you have the bonus content present on the game disc. First up, each stage from each game now has its own online leaderboard. On top of that, each game now has three selectable difficulty levels with individual leaderboards to make 100 in total. No matter who you are, you might have a chance at making it to the top 20 on at least one of them… with practice.

The difficulty levels don’t do much to change the games’ level designs or overall experiences. The five Bit.Trip games that involve some sort of life meter have had their damage scaled to fit the chosen level of challenge. You can take a lot of damage on Easy and still get by, whereas a few hits will kill you on Hard. As for RUNNER, it’s all about gold. Easy difficulty removes all gold from every level (causing less of a distraction and temptation), which also does away with the retro challenges. On Hard, you have to collect every piece of gold from every level just to progress. Seeing as I’ve never even come close to collecting all the gold in the harder stages of RUNNER, I don’t think I’ll be able to finish the game on Hard anytime soon. That said, I know some of you will pull it off, and I can’t wait to see you try.

The main reason to even attempt such a feat is to unlock some of the games’ bonus content. There are eight additional songs, twelve videos, eighteen pieces of concept art, and six letters to fans explaining the symbolism behind the games. It’s pretty standard stuff, but all essential for the true Bit.Trip fan. The letters are an especially nice touch, and thankfully, they are the easiest to unlock. More than just a personal thank-you, these write-ups reveal the intended meaning of each game. That’s something I’ve been waiting for since the series began in 2009, so it’s bittersweet to finally get the answers to the big questions. Thankfully, the guys at Gaijin still leave plenty of the specifics to player imagination, so if you’re determined to believe that Bit.Trip BEAT is all about sperm (like I am), then your illusions can remain intact.

All of those features are plenty nice, but the real stars of Bit.Trip Complete are the all-new challenges. Each game now features 20 new mini-levels, making for 120 new challenges in all. Each batch of 20 is about as long as one of the games’ standard “worlds,” which effectively means that about one-fourth of the level design on this compilation is new. Other companies would have made these challenges paid DLC, but with Bit.Trip Complete, you actually get to play the new stuff for free.

These mini-levels play like best-of-the-Bit.Trip-series stages; intense, concentrated blasts of Bit.Trip power that Gaijin didn’t dare put in the original games, lest they blow your mind for good. They range in difficulty from “yeah, I can do that in a couple of tries” to “I will dedicate the next few hours of my life to attempting to complete this minute-long level, and even then, I will probably fail.” Remember those evil bouncing orange beats from Bit.Trip BEAT? Well, get ready to bounce one of those bastards 50 times in a row, or die trying. Or remember those douchebag pink bullets from Bit.Trip FATE that tracked you wherever you went, forcing you to plan your escape three moves in advance? Well, get ready to navigate a screen full of them. Difficult or not, these levels will definitely quench the hunger that Bit.Trip fans have for new content. It will be a long time before the average person manages to unlock and complete them all.

Given that all of the Bit.Trip games are almost perfect as-is, and that this collection has so much new content — all of it top-notch — and that this is a $40 budget release at retail… well, I think I have to go whole hog on this one. It feels weird to finally go ahead and commit to this sacred, borderline magical number, but it’s the truest form of expression I have at my disposal to show you just how much enjoyment I’ve gotten from this compilation.

To quote an extremely charming man, “Bit.Trip. you complete me.”