Old world underground, where are you now?

The open-world genre gives me hesitation these days; it’s almost a bad word. I blame Ubisoft. Not another waypoint! Not another tower to climb! Not another cathedral to parkour through! I’ll get to the main plot soon, I promise! Just a few more collectibles!

It’s not that I’m entirely down on the genre. I’ll readily admit to enjoying it. Games like The Legend of Zelda: Breath of the Wild and Spider-Man have captured my attention and drawn me in, but to me, it’s like eating a bag of chips; my brain tells me I love it while it’s happening, but almost as soon as I’m done, I feel empty. The expanse of the vacuum varies, but I think even the best open-world games have given me this feeling.

What gave me further pause about Biomutant was its protracted development time. It was announced back in 2017, I pre-ordered it in 2019, and here is finally in 2021. Its feature list has always struck me as over-ambitious, especially for a small team like Experiment 101. It was billed as this fully adaptable game that let you make all the decisions in what you do and how you approach the game’s main objectives. I had my doubts that it would deliver, and now that it’s finally here, I can firmly say that no, it doesn’t quite make it. It’s a bag of chips. Delicious, delicious chips. 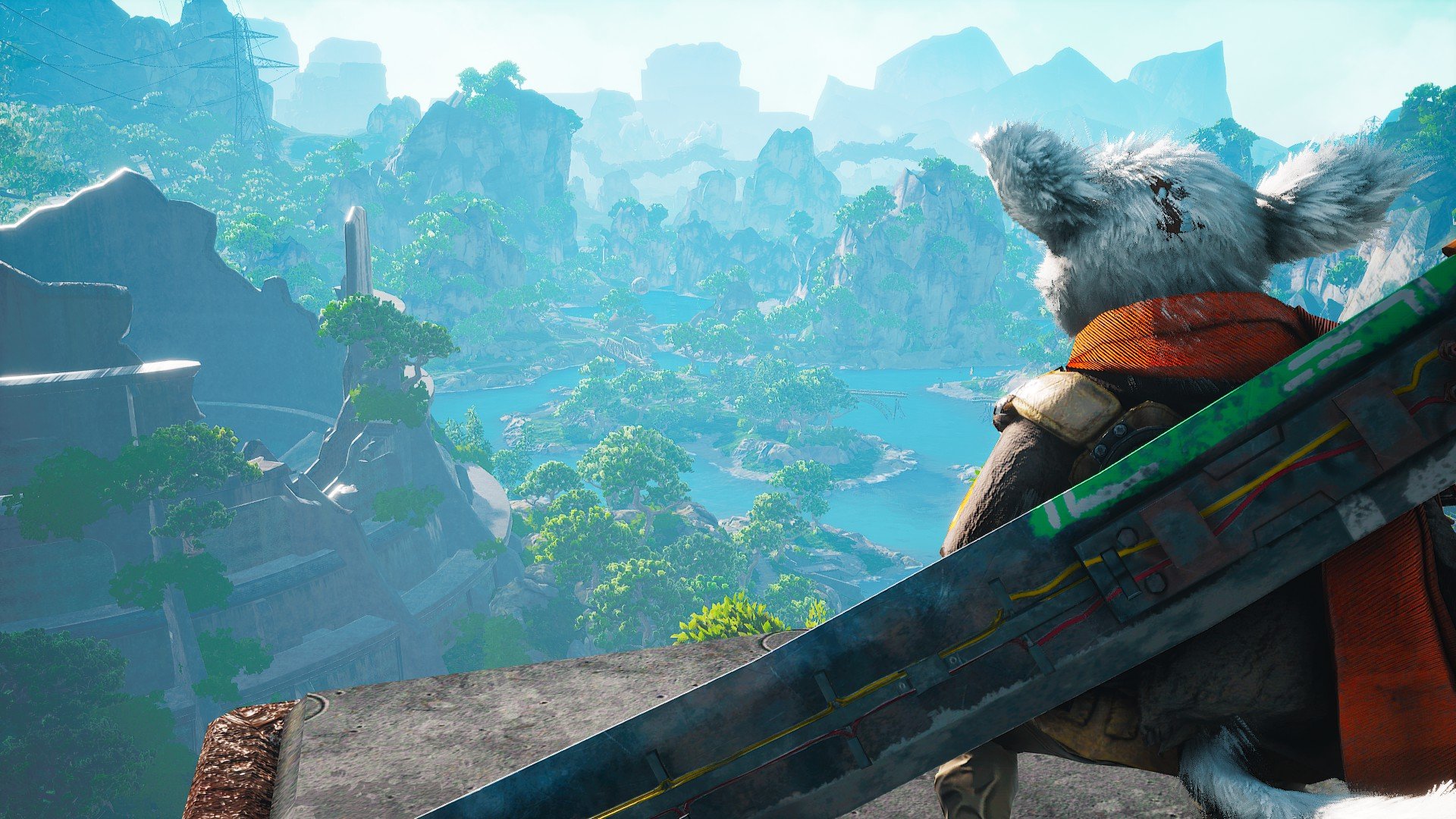 To be fair, Biomutant truly is a game with a lot of flexibility. You can be a complete jerk or a selfless hero, you can make the world worse off or try to save it, and a lot of the game’s activities are optional in the truest of senses. Success can be achieved, even if you want to partake in one of the game’s main mechanics or not.

It’s not true freedom, of course, just freedom within reason. The narrative in Biomutant centers around a post-apocalyptic world struggling for breath. Humanity screwed the environment badly, and the planet’s new inhabitants, the mutated predecessors of our wildlife, have been trying to keep things from getting worse. However, the Tree of Life is dying. A plague is spreading, and a quartet of munsters are eating at its roots. Which is where you come in.

You’re some sort of wandering ronin returning to their homeland after considerable time away. Finding the tribes splintered and in turmoil, the Tree of Life withering, and munsters taking over, you set to work getting things back in order. If this means crushing everyone and helping the tree on its way, then have at it, you munster.

Mutant is a pretty apt description of Biomutant. At times, it feels like a twisting or mutation of particular formulas. It’s also narratively a bit of an amalgamation. It’s hard not to get a whiff of Breath of the Wild, Fallout, or Far Cry. There’s four munsters divided into the four corners of the map that you can take out at your own pace or just whenever. There are tribes you can unite or destroy or just ignore. You know that territory system where your map has little blotches on it telling you what belongs to what tribe? It’s here.

It has RPG mechanics and crafting, there are zones that are hazardous unless you’ve gathered gear and upgraded your character to resist their inflictions. There are munsters to be honted and cosmetic stuff to find for your various vehicles. It’s a big, sloshing bucket full of stew.

Which isn’t to say it’s bad or even derivative. It has its own flow, the world has its own feel, it’s just a lot. It’s hard to complain about having so much content, especially in a game that is launching at a bargain price. Every time I’d start feeling like things were becoming routine, it would introduce something surprising that I hadn’t been expecting. I’d be going through a graveyard and suddenly be assaulted by skeletons or I’d find ruins that contain a gameplay mechanic I didn’t even know about. It tries to excite at every corner, and it largely succeeds.

There was even one particular moment where I got that feeling like I was playing through someone else’s fetish, which was a little discomforting. I don’t know, maybe it’s supposed to be innocuous and I’ve just spent too much time on the internet. 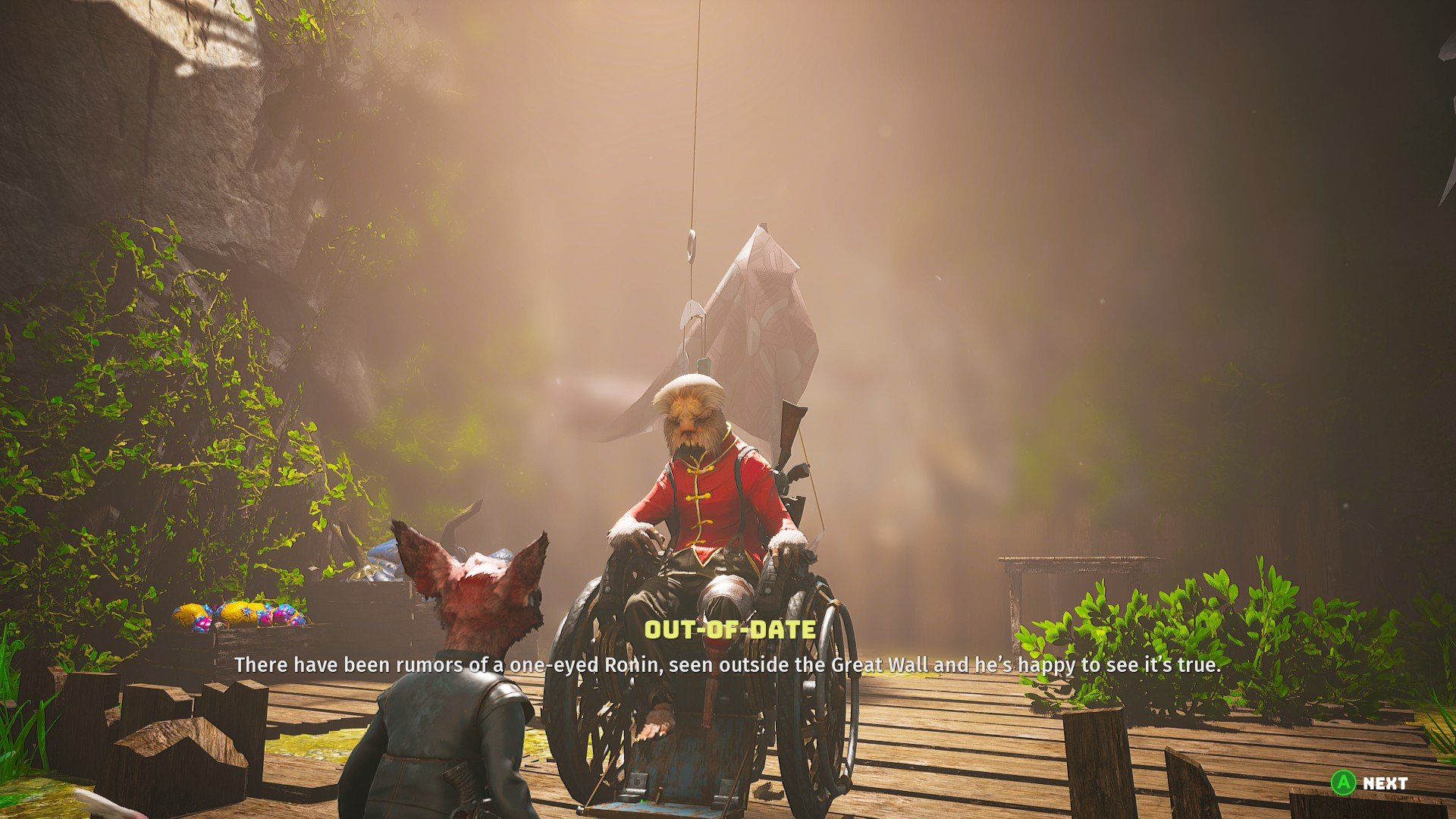 The mutation comes from the fact that not every facet got the same amount of love. The alignment system, for example, either needed to be cut or polished. On the surface, it’s pretty typical: release the prisoner or punch them in the face for no reason aside from the chance to be a dick. That’s disappointing in its own right, but the larger issue is that you’re mostly just collecting good and bad karma, and that’s it. Sure, characters will call you a dick if you’re a dick, but let me explain.

Most of the time in Biomutant you’re just deciding whether or not you want the good points or the bad points. Spare a tribe’s Sifu or lock them up. Destroy a tribe or bring them into the fold. Release prisoners or give a speech about something. It’s nothing meaningful. It could have been something like siege a tribe outpost until they starve or challenge the Sifu to single combat, but it’s not. And sometimes I’d trip across dick actions by accident. I walked up to boxes of food and got the “interact” prompt, and when I pressed it, my guy just burned the boxes for no reason. It would take a long time to upset my karma ratio, it’s just out of character for a hero character.

The tribes are another half-baked mechanic. Three want to unite the tribes and save the world, the other three want to destroy the tribes and end the world. There aren’t two in-betweens, those are your options. You’re also forced into joining one of two tribes at the beginning of Biomutant (even though advertising says the tribe war is optional), but you can then join another tribe at the cost of betraying your current one. I did this by accident. I just wanted to ask one of the other friendly tribes if they wanted to unite, and the next thing I knew, I had to retake territory I took for my previous tribe. 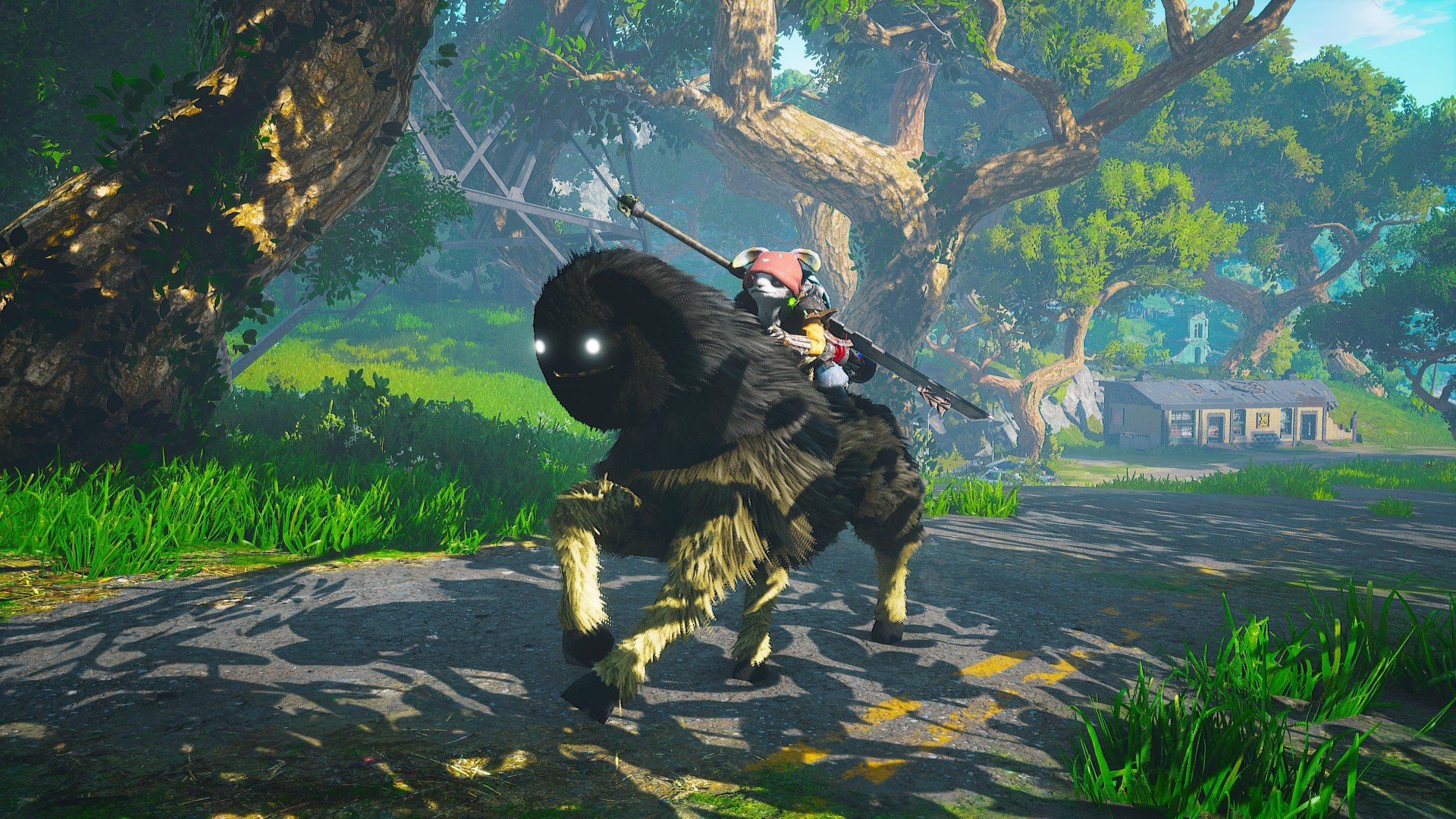 It’s a lot of open-world weirdness. I’d have difficulty naming one of these games that doesn’t have disappointingly raw mechanics floating around, I just kind of expect it at this point, but Biomutant is a game so crammed with content that you go from dizzying highs to nauseating lows pretty frequently.

It’s that pervasive smell of, “we eventually need to release this game.” At some point — and maybe this was dictated at a corporate level, but it had to happen — they had to take all the pieces they had and put it together into a complete, playable experience. That means some of it is extremely good, and some of it is barely worth doing, and the fact that it’s all stirred together means that you can’t have the good without tripping into the bad.

I could honestly write an essay on all the little ways that Biomutant disappointed me, but I’d lose even the bravest soul around the 4,000 word mark and everyone else would just scroll straight to the score anyway. I wish the narrator would shut up every once and a while. There’s actually a slider for his frequency, but I’d swear it didn’t do anything. He’d still remind me it’s night three times a night. It’s also stupid easy. I don’t play open-world games for their challenge, but after I realized I never used healing items, I kicked the difficulty up to hard. Then I created a gun that eliminated the remaining challenge. 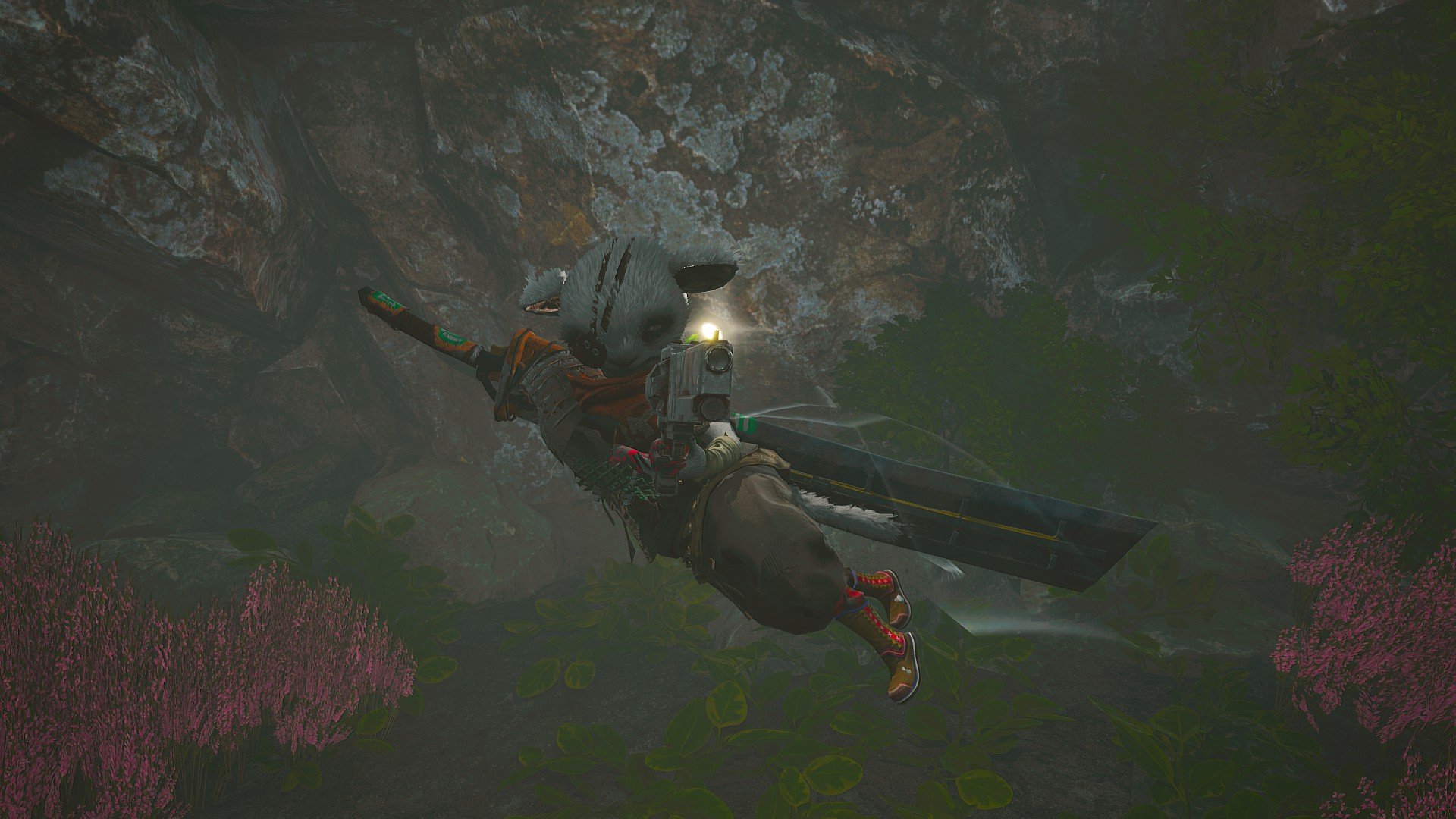 So, yeah, I can gripe about Biomutant’s shortcomings until the gnoats come home, but I feel that would give the impression that I didn’t like the game. On the contrary, I really enjoyed it. Exploring its world was a joy, finding a new “ultimate weapon” that I could take apart and turn into an even better weapon was always exciting, and it kept providing new experiences throughout its runtime. The combat is fun, allowing you to mix and match different abilities to find the best way to inflict pain. It also does a good job of leaving it up to you how you tackle the game, providing a bevy of options and just letting you choose what you want to do.

It’s just got a lot of loose screws, which is horrifying to see on a roller coaster, but not quite the same omen of death in a video game. I think the team did the best they could putting all the little pieces together, and the amount of content that resulted is dizzying for a bargain priced title developed by a small team. I honestly think that Biomutant’s potential isn’t going to be fully realized until a sequel, spiritual or otherwise, but what’s here is perfectly entertaining.

I had a lot of trouble tearing myself away from Biomutant, and a lot of my grievances didn’t really surface until I’d finished it and had time to digest. Before that, I was absorbed in exploring its well-designed world, plumbing ruins, collecting dopey looking mounts, and dressing like I just survived a landfill explosion. There are some unwanted mutations in its genes, but they’re covered in fur and easy to overlook.