It’s hard to divorce David Cage, the public figure, from the games Quantic Dream makes. He is, after all, a man who put himself in Indigo Prophecy‘s tutorial, immortalized as the movie director he’s always dreamed of being. The self-styled auteur fiercely believes in being the one man with the one vision, and gladly takes credit for his games’ success in doing so.

The auteur theory is all well and good, but it only really works out for a piece of art if the auteur in question is good enough to actually be an auteur. I’ve believed for years that Cage, while an undoubtedly talented man, is simply not a strong enough creator to be an unchallenged writer and director. If Beyond: Two Souls does anything right, it’s prove that belief.

It demonstrates, beyond doubt, that Hollywood actors, cutting edge-visual technology, and a decent budget mean nothing, if it’s all being piled onto a ship with an unsuitable captain. 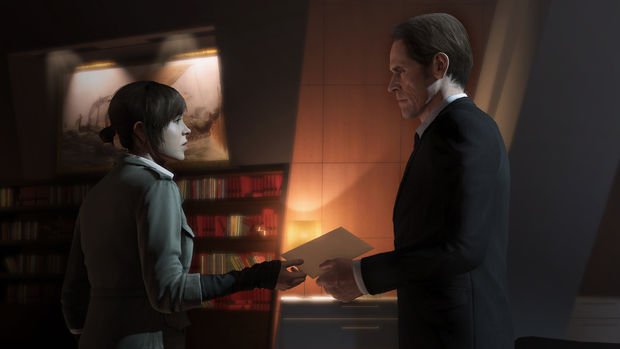 Beyond: Two Souls, is about a girl called Jodie, played by Ellen Page, which is important to note as Jodie is also every character Ellen Page is typecast into playing. She screams, and is sarcastic, and does that half-smile thing, and that’s more or less all there is to her personality. She also has more personality than almost every character combined, including the criminally misused Willem Dafoe, crammed as he is into the role of Jodie’s dreary paranormal doctor/caretaker, Nathan Dawkins.

Dawkins has charge of Jodie because she possesses dangerous powers — or rather, the invisible creature inextricably linked to her does. Jodie is bound to an otherworldly being called Aiden, over which she has limited control. He is unwieldy, fiercely protective of her, and is the reason Jodie spends most of her life in a laboratory, under constant surveillance.

While Beyond has a cast of archetypal and terminally uninteresting characters, it has to be said the writing is noticeably better than it was in Heavy Rain. Dialog is slightly more believable, scenes are less awkward, and there are fewer glaring plot holes or embarrassing pseudoscience. However, the story is presented awfully, in a nonlinear fashion contrived to evoke the movies of Godard, Altman, or Tarantino.

There’s nothing wrong with the use of disrupted narrative, but it’s a technique that requires more care than Beyond even comes to close to providing. One moment, Jodie’s a child in a secret lab, the next she’s a homeless adult, then a teenager, then a child again, then a member of the CIA. The narrative breaks seem arbitrary and deliver nothing of value to the actual story. Disjointed and only vaguely connected sequences occur without adequate lead-in, and regularly deliver moments that would have had far greater impact had they been presented in a linear story, where the appropriate amount of pacing and build could be achieved. Instead, we’re supposed to deeply care about characters who have been barely introduced, while following at least three stories, and a handful of non sequiturs, that have very little to do with each other.

Even worse, the application of the nonlinear narrative comes off as a lazy excuse to put Jodie in situations without having to adequately explain them, which gives the entire game a fractured, pointless atmosphere. Indeed, there seems no real point at all in having broken up the story, other than to mimic those films Quantic Dream perpetually crawls in the shadow of. As such, an attempt to look clever has come across as little more than clumsy pretentiousness. 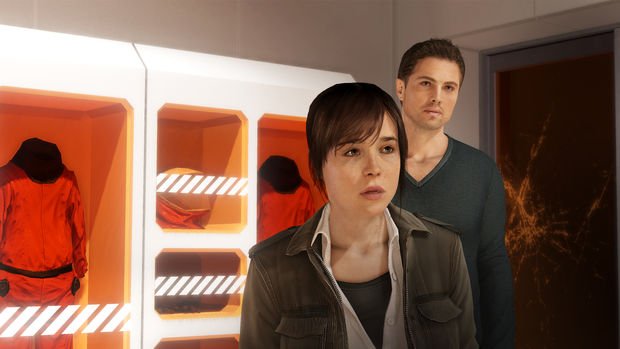 This is to say nothing of Beyond‘s total lack of character development. Its frequent time hopping does little to help the fact that there’s nobody to root for, and even less to remember. One character, for example, is introduced in an early scene as a cold, unlikable hardass, right before we skip to Jodie falling in love with him years later. She tells us — through Aiden — that he’s so funny, and great to be around, but we never see any evidence of this. The best he becomes is a generic love interest with no distinguishing features. If we have to be told what a character’s personality is, without the character ever exhibiting a single trait pertaining to its verbal description, the writing has failed completely.

Admittedly, there are some decent scenes, but those are mostly thanks to tried and tested narrative tropes seen dozens of times before. The scene in which Jodie is bullied at a party before Aiden wreaks violent revenge is stylishly done, but it’s nothing Carrie didn’t do better. Likewise, Jodie’s barely meaningful adventure in the Navajo Desert is Beyond‘s best sequence of events, but it leans heavily on well-worn and practically gauche Native American stereotypes to make it work. 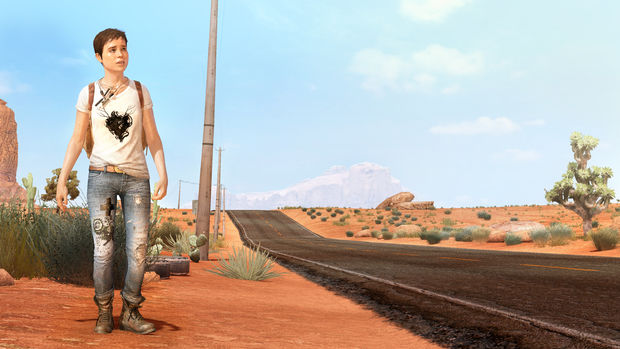 I’ve managed to go a long while before mentioning any gameplay, and one gets the feeling Quantic Dream would like it that way. Essentially following in Heavy Rain‘s footsteps, Beyond is another spiritual successor to Dragon’s Lair, with even less agency and some awkward controls thrown in for good measure. As Jodie, interactions are restricted mostly to walking around, opening doors, engaging in restrictive conversations, and indulging in the occasional quick-time-event sequence. For much of this, the player’s input is almost entirely optional. QTE action sequences can be completed without needing to even pick up the controller, as Jodie will survive all encounters if you fail every single button prompt. She’ll get hurt a bit, and the story might have a slight temporary diversion, but that’s about it. Even dialog, if you don’t choose a response, will eventually play itself out.

As with Heavy Rain, the potential for thrilling chase sequences and action scenes is mercilessly dashed against the rocks in favor of an experience so arrogant, it cannot bear to throw up a barrier between you and its allegedly brilliant story. Once you cotton on to the fact that your personal input is almost meaningless, and the impact of your inaction is frivolous, your only real incentive for “playing” is to humor the game, and it does indeed feel like you’re patronizing it when you decide to play along with the fantasy of player agency. Nowhere is this more typified than one sequence in which I could choose to speak up in order to stop something bad happening to another character … and I didn’t say a word. It didn’t really matter if the bad thing happened (there was only a cosmetic change) and I simply didn’t care about the bland, superficial plot vehicle whose lifeless idea of life was in my hands.

There’s no tension, no sense of investment, no pleasure to be derived from getting personally involved. Just a plodding, methodical march towards the game’s warbling conclusion. 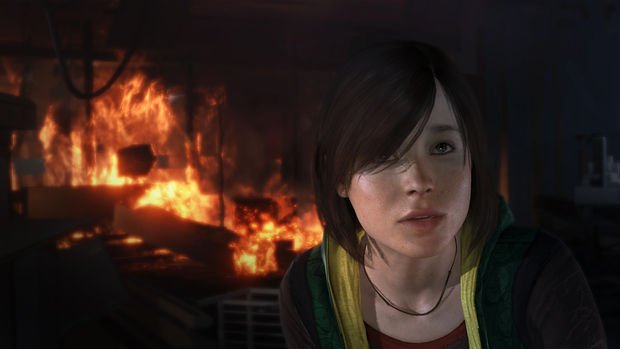 At almost any time, you can switch to Aiden with a press of the Triangle button, but like with everything in this game, any sense of choice and freedom is a mere illusion. As Aiden, you may move through walls, knock objects around, and possess or choke characters, but his skills all amount to one big waste of potential. You only need to be Aiden when the game specifically tells you (or forces you) to be him, and you only interact with the tiny handful of objects available — all helpfully labeled with bright blue dots. If, for example, Jodie is under siege by a SWAT Team, you can only possess one or two of the arbitrarily predetermined targets, as each scene has a specific way in which it wants to be played. This, of course, opens up a few plot holes, when you start wondering why Aiden only seems to possess certain characters, and why Aiden can only knock over a few objects, and seems to forget these useful powers when the plot decides to invent a sense of threat out of whole cloth.

It’s also not very enjoyable to play as Aiden, despite what promise he has. The floating controls are awkward, sluggish, and disorienting, while the way in which you interact with the world — holding down buttons and moving the analog sticks about — is ungainly and alienating. It shouldn’t feel boring or bumbling to be a wrathful poltergeist, but Aiden manages to be both. In fact, he may not even be the wrathful vandal he’s portrayed as. After five minutes in the steering wheel, one could reasonably assume he’s just drunk.

There’s really not much else to say about the way the game plays. Whatever it tries to throw at you — whether you’re avoiding beastly entities from the cringingly named Infraworld, taking cover to shoot at terrorists because of reasons, or delivering a baby in an abandoned building, you’re really just performing the same somber actions, pulling analog sticks and pressing buttons when commanded like some Pavlovian experiment gone wrong. This is not a game to be played, it’s an instructional video to be followed, in order to further unlock a story that isn’t very good, a story spat at the viewer in shattered, tattered pieces. 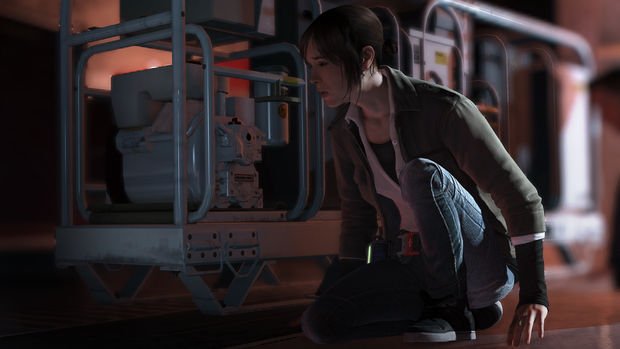 Visually, Two Souls is okay to look at. Yes, the uncanny valley faces are impressive on a technical level, but the frequent texture pop-in and robotic bodily animations swiftly defecate on the magic. The game is prone to brief freezing, and loading times are fairly dreadful. Environments are bland, and overall the visual quality fails to stand out in this day and age. Still, if you’re curious to know what Ellen Page would look like with every hairstyle ever, you’ll find yourself adequately sated.

At least the soundtrack is beautiful, and it does a good job of making certain scenes more compelling than they’d otherwise be, while the acting is a huge step up from Heavy Rain. Ellen Page and Willem Dafoe do fantastically, given the mediocrity they have to work with, while the supporting cast is fairly solid too. It’s a shame much of the dialog still makes me want to cover my eyes and scrunch my eyes up tight, but at least the delivery is convincing enough. 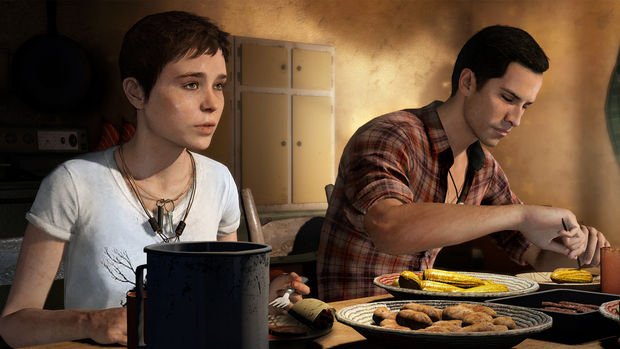 For all the complaints that can be leveled at Beyond — and they can be leveled in feckless abundance — the overwhelming problem with it is that it’s just plain boring. Like a sociopath, Beyond: Two Souls knows how to act like it has a heart, while providing nothing of the emotional depth required to connect with an audience. Its characters can smile, and cry, and tell us they’re feeling all of these feelings, but their paper-thin presentation and the frequent narrative dead ends prevent any of their pantomime from becoming too convincing.

And that’s all Beyond: Two Souls is — a pantomime. A childish play at being a meaningful journey, a vapid illusion of passion and poignancy. Nothing but a pantomime.