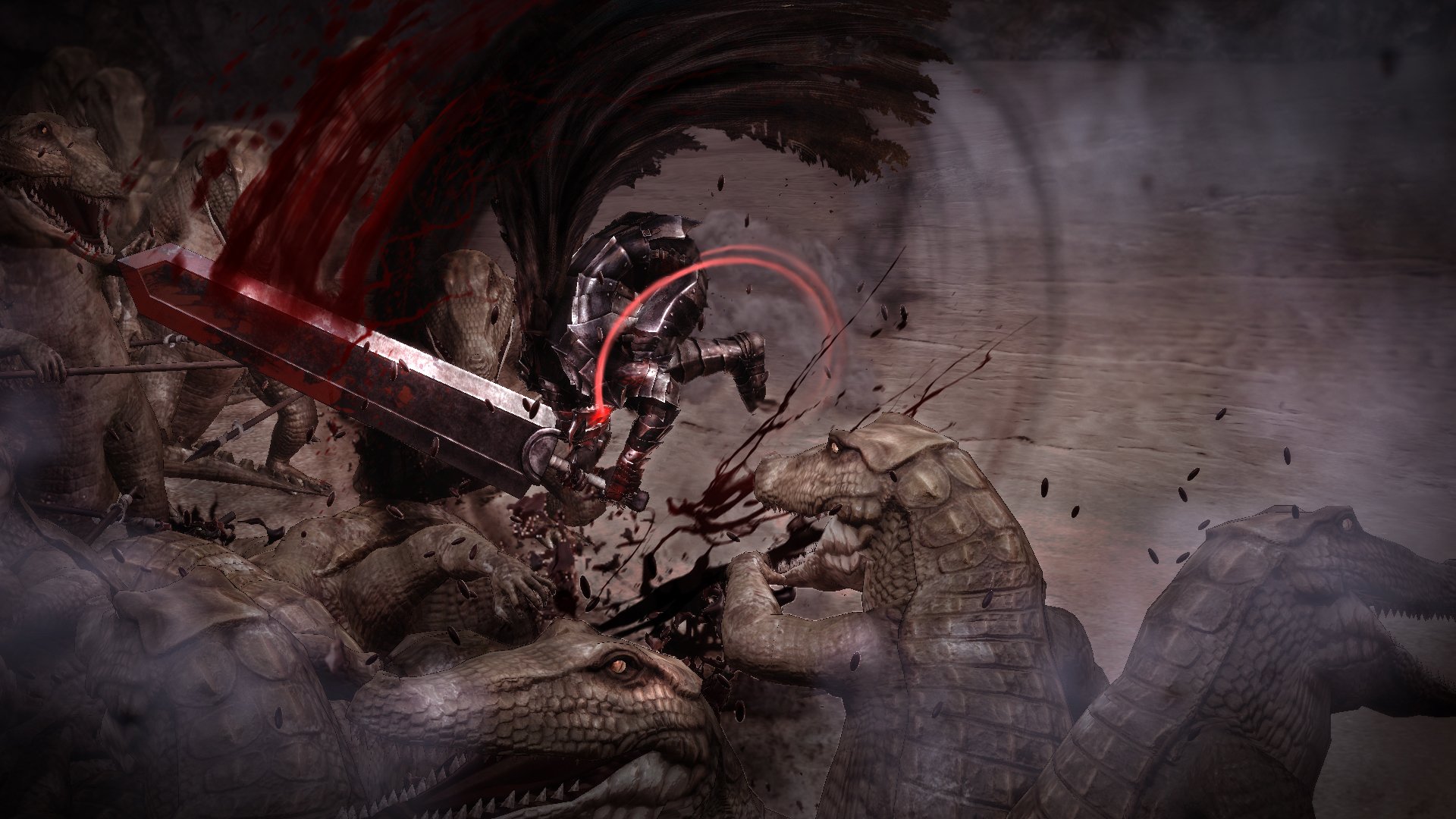 Watching the original Berserk anime for the first time had a profound impact on me. I had seen bleak or otherwise violent films like Starship Troopers before as a youngster, but gazing upon Berserk was the first time I had felt like I had been truly taken hold by a grimdark, hopeless world of despair.

Berserk and the Band of the Hawk misses out on some of that in its effort to provide a Warriors hack-and-slash power fantasy, but it succeeds all the same. 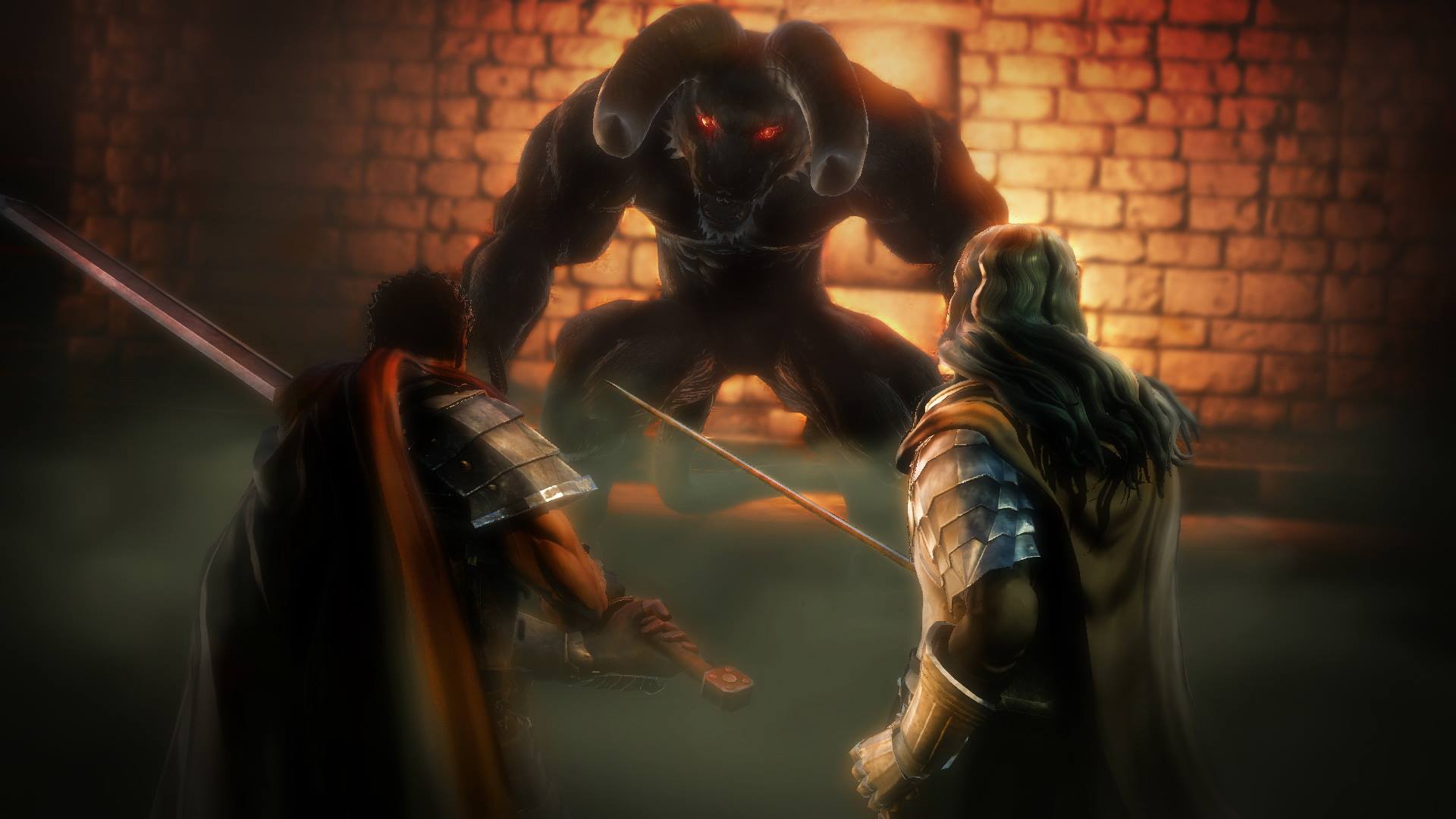 It’s really hard to confine Berserk‘s insanity to an interactive medium. Band of the Hawk does a good job of explaining the essence of the original manga, but there’s some naturally truncated character development and several jarring takes on poignant scenes so they work in game form. There’s a big focus on combat and hellish imagery, but without some of the lengthier emotional arcs, the narrative misses out on that extra spark that makes the story so special.

It’s such a small thing but I don’t like how the narrative starts in media res at the Eclipse, a major event of the most popular arc of the series, and spoils some major plotpoints for newcomers. It should have began with the Black Swordsman arc, after Guts is already a bonafide badass, dealing with side villains and mainly showcasing his talents. It would have been a great introduction to both the character and the mechanics of Band of the Hawk. I don’t particularly like it as a tutorial, either. We should have been introduced to a young Guts in training, perhaps getting beaten up by his superiors and adoptive father. It would have added a little depth and saved the culmination of one of two arcs featured in the game for later.

Still, it’s a great effort and mostly hits all the right notes without going into “Adults Only” rating territory. Guts is still a sympathetic character (perhaps more so with the omission of a few bits from the manga), and the score and visuals are authentic. I especially love the drastic splashes of blood when you’re swinging through hundreds of units at once. Berserk always felt like it would make a great Warriors/Musuo game, and Omega Force took the time to ensure that it would be appropriately bloody.

A lot of the same mechanics translate too. Frenzy Mode is like a Musuo super attack, but you level it up five times within a mission to make it stronger after each use. It’s a cool idea that encourages you to keep using it instead of saving it for the right moment, which is all very Berserk — encouraging constant combat and desperation, especially on higher difficulty levels. It’s also a traditional Omega Force joint in a lot of good ways. There are plenty of submissions to go for within each story level, including Behelit objectives, the collectibles of the game that unlock more gallery shots (and are frankly more fun when tied to challenges than chasing after the hidden Skulltulas in Hyrule Warriors, for example).

Once again, with a deep combo system (that feeds into Berserk‘s ultraviolent chopping up of bodies with specific moves to fuel your supers), this Musuo is more than a hack-and-slash. You have the opportunity to level up, gain new weapons and abilities, kit out your avatar with items to create specific builds, and try out new characters with vastly different styles. There’s also a morale gauge to worry about that impacts your side’s forces and the outcome of the battle, so you can’t just have tunnel vision from point A to point B. Each mission is capped off by a nice little moment at your camp (with Fire Emblem-esque chats from a menu screen) and multiple scenes from the Golden Age arc anime movies.

After playing through it, I went back and rewatched the old show, said movies, finished watching the new anime, and re-read some of the newer manga releases. Having done that, I was even happier with how the game turned out. Berserk‘s imposing foes translate well to boss fights, perhaps more than any other game in the Musuo series. The entire theme just works for a hack-and-slash, with bloody and brutal anime intros and close-up shots of blood on your face during super abilities. They somehow manage to get around the AO rating with several off-screen or out-of-focus shots from the anime (like executions) and the removal of some sex scenes, but limbs are being hacked off and blood is gushing everywhere, so I’m good. 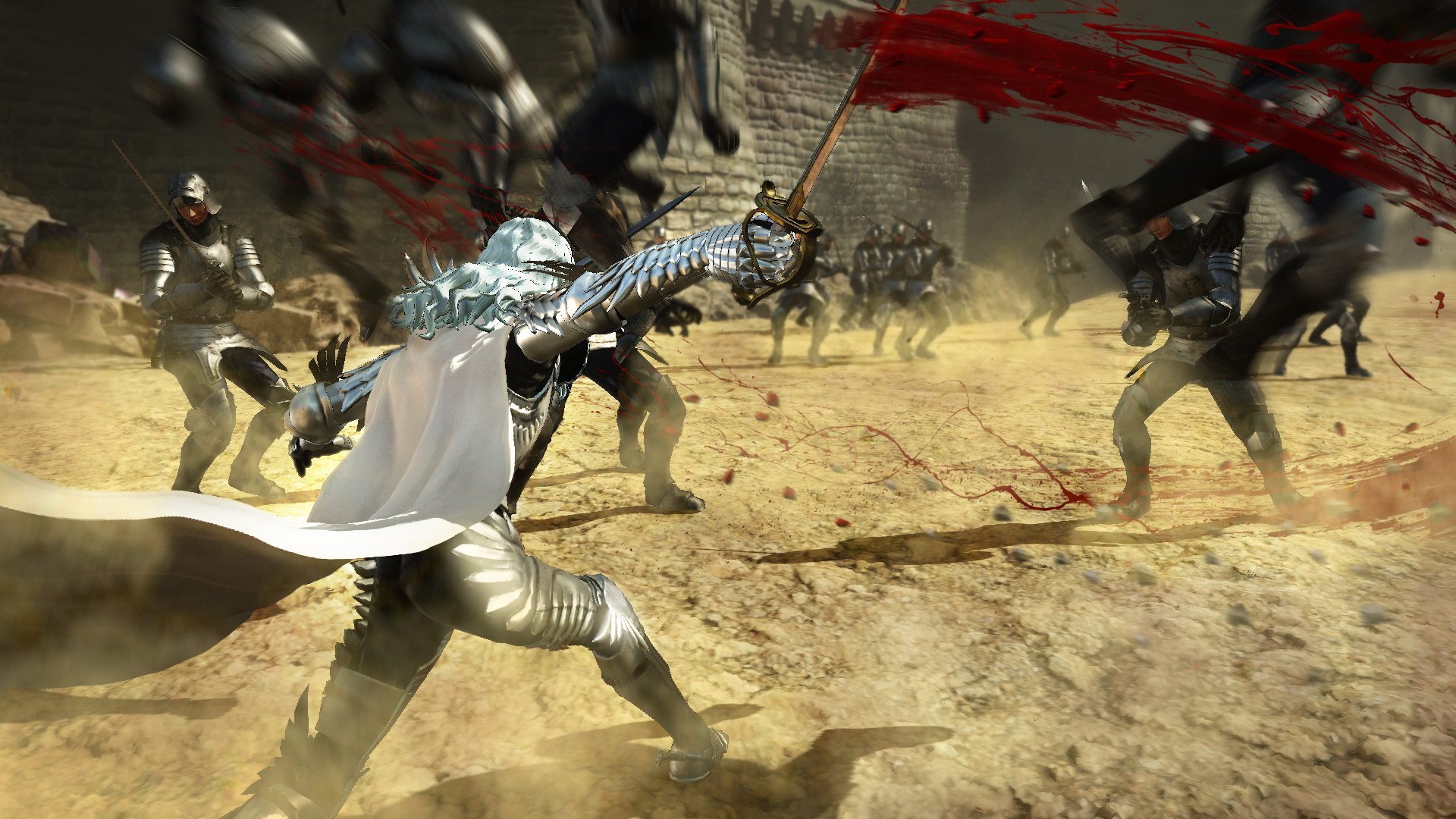 Band of the Hawk succeeds in fulfilling the fantasy of an interactive Berserk re-telling, just like the bit in the movies where he fights 100 men.Where it mainly falters is its efficacy as a Warriors game. From the get-go, all you have access to is the story mode. It’s an underwhelming menu for sure, but after the first mission you’ll unlock free mode and Endless Eclipse (which I’ll cover in a moment). What you can’t unlock, ever, is a multiplayer mode — and there’s no plans to add it, even as DLC. I have to say I don’t like this recent trend of Warriors games not having co-op, and Koei Tecmo is really weird about it. Hyrule Warriors had it (albeit with framerate drops), Dragon Quest Heroes didn’t have it, and Attack on Titan had it patched in.

Endless Eclipse — which for the sake of not spoiling the story for some — let’s say is an endless dungeon in a hellish world. It is basically your endgame. More floors are unlocked the more you play, and by playing as each character, you earn more story tidbits. It’s a gimmick, but it works, mostly because it’s so satisfying to continuously earn more ways to slice and dice some creepy-looking demons. Eight characters in all might seem like a crime, but by the end I was happy with how they all turned out.

Note that some (like Guts and his Berserk Armor) have variations, and they have all their bases covered here with purposeful, quick, balanced, magic, and ranged archetypes. I feel like 16 playable characters is the sweet spot (which is what Hyrule Warriors had pre-updates or DLC), and while Band of the Hawk teeters on the bare minimum, none of it feels like clone fat. Still, I can’t help but feel like the lack of a full roster is a missed opportunity, especially if there’s never another Berserk game. 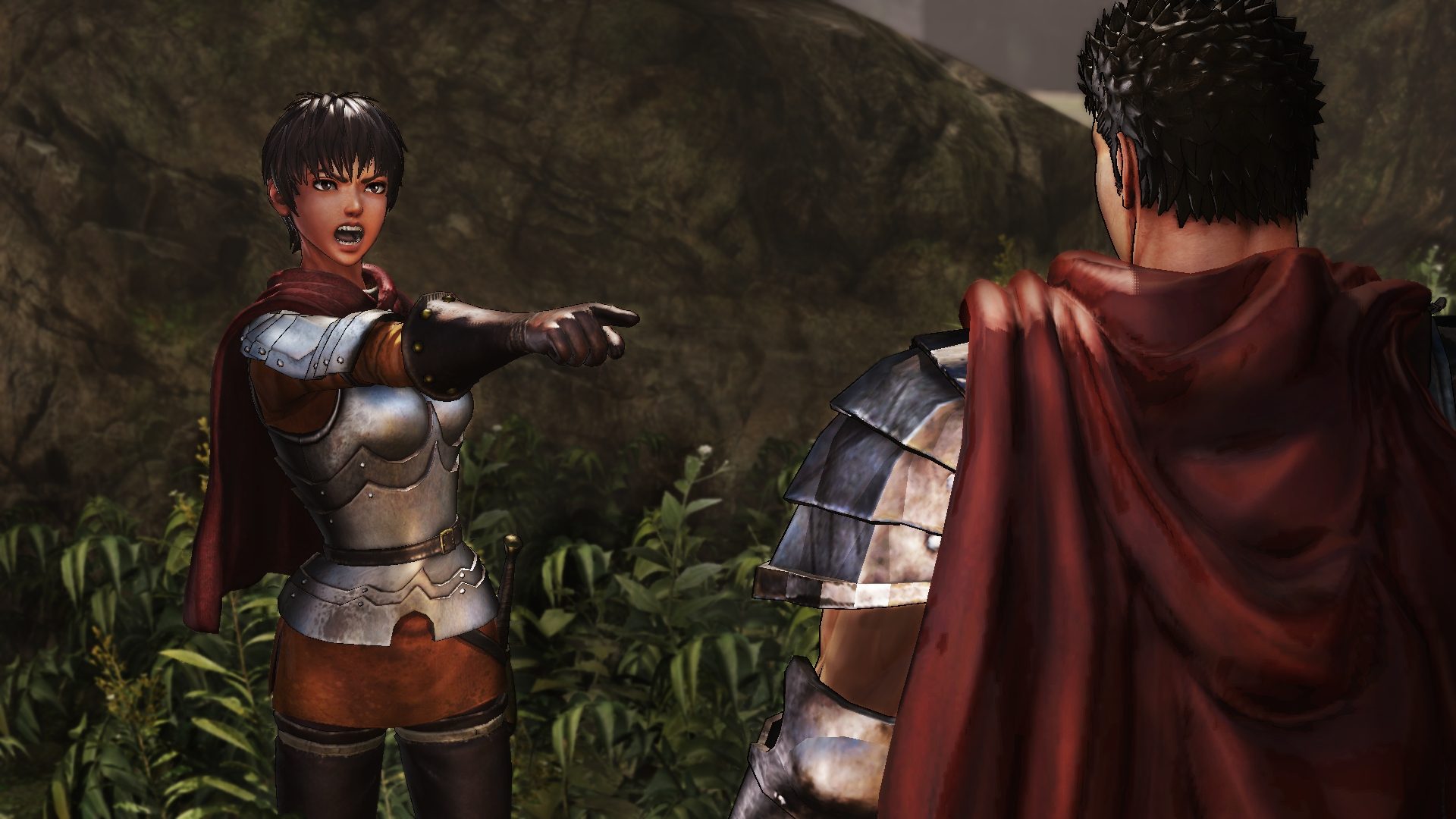 Do you want to slice some demons into little meat chunks as a troubled badass, and perhaps missed out on the great Dreamcast and PS2 renditions of Berserk? Get Band of the Hawk. Seeing the story continue past the Golden Age is enough for an enthusiast to buy in. Otherwise, wait for the price to match what’s being offered.