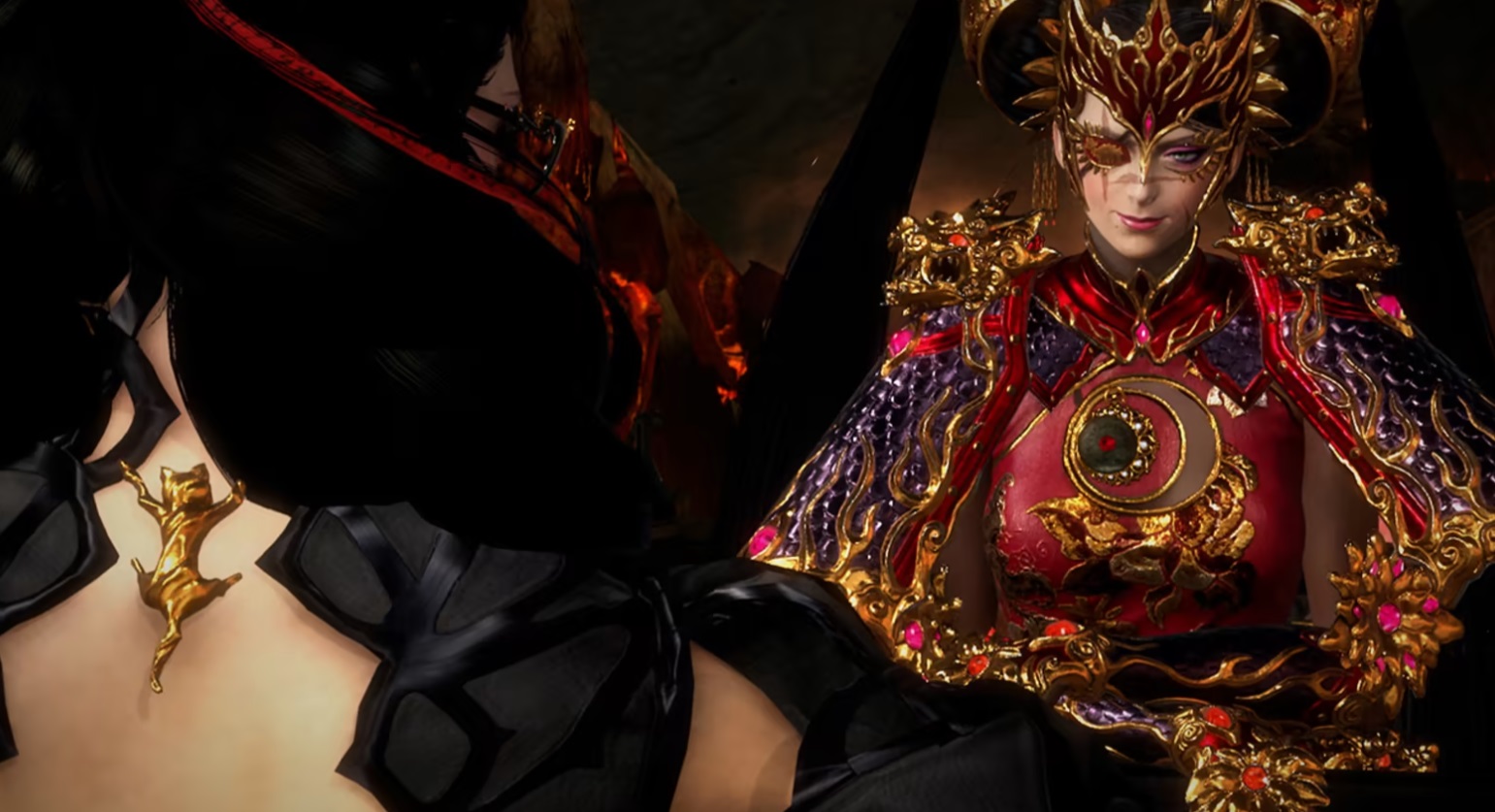 Bayonetta 1 and 2 are up there with Devil May Cry 3 and Ninja Gaiden Black as one of a select few all-time action greats. There’s a strong case that until Devil May Cry 5 came along, Platinum was practically peerless in the contemporary action space. Now, we have Bayonetta 3.

So how do you follow up on prior perfection? More of it. 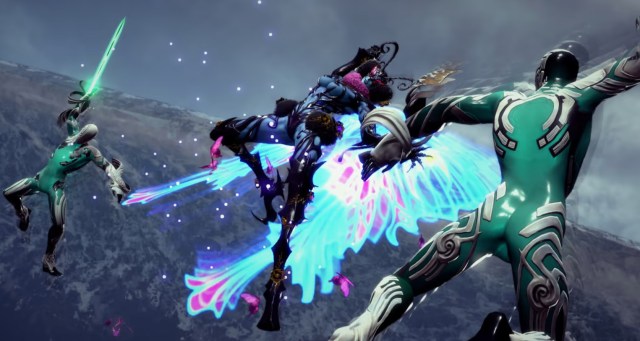 Bayonetta 3 starts with Bayonetta getting her ass kicked without context; which is a pretty great way to kick off an action game. We’re immediately introduced to newcomer Viola, who has an appropriate punk vibe, looking to make a name for herself and earn the respect of Bayonetta while saving the world.

The phrase “multiverse” is literally used early on, and that’s the heart of the rabbit hole that Bayonetta 3 takes us down. We’ll see multiple other incarnations of existing characters, which is a slick way to marry both the old and the new into one non-repetitive or cloying package. “Bayonetta nostalgia” is a thing at this point, given that it’s been 13 years and multiple generations since her debut, and most of it is executed in a tasteful fashion. Going big in terms of scope, while also keeping things personal, is a smart way to handle a game like this. The new stuff, thankfully, has the same amount of care put into it, so it doesn’t just feel like a retread.

Viola thankfully doesn’t fall into the trap of becoming an obnoxious “attitude-era” character. She’s relatable, she likes anime, and a lot of her physical comedy is to the tune of Trigun‘s Vash the Stampede. She sports separate mechanics that involve parrying at the perfect time instead of dodging (like Bayonetta), on top of her playful cat demon Cheshire (who can be summoned in combat) which immediately gives her a fresh playstyle. This isn’t the first game to have two distinct “young versus old” heroes that juggle different mechanical concepts, but it’s one of the better-handled ones over the years. While Viola’s voice lines can get repetitive, the actress (Anna Brisbin) gives it her all, with a wide variety of emotions in play by the time the curtain closes.

As far as Bayonetta’s performance goes, I’d be remiss not to mention the controversy with the original actor, as well as the complicated follow-up report. I’ll leave you to make your own decisions about how to handle this, but suffice to say that Jennifer Hale is once again a true professional in the booth, and does a fantastic job at voicing Bayonetta. Not only does she need to juggle the Bayonetta we’re actually playing and hearing on a constant basis, but Hale also voices many other characters, including the other multiversal incarnations of the titular witch. She has a ton of dialogue, but manages to give each version their own spin (even when it comes to their nuances or attitude).

Of course, the sleaze and impeccable sense of style is still present in the threequel, including a jazzy poppy soundtrack that I would listen to in my free time; and some crazy cutscenes that include a few of the most insane scenes I’ve seen all year in almost any medium. There’s a lot of tension to the story (as well as last-minute eucatastrophic saves that will make you smile), and Bayonetta gains access to an array of powers that allow for tons of different playstyles. Most of these are incorporated directly into the game’s cutscenes, albeit to an extreme degree.

“Kick, punch, shoot, dodge (with the time-slowing witch time mechanic)” is still the core of the gameplay but the combo system is even more detailed this time around with the addition of demon summoning. There’s a quick-swap system (toggled by L) for two weapons, which are tied to traversal, to give them even more personality. Now instead of whipping people with a yo-yo with a spider-inspired loadout, you can dash to actually turn into a spider, skitter around on walls, and flip around via webbing. Summoning a frog to dance and cause an acid rainfall and directing the course of a train with tank turrets on the side of it is just as fun to control. 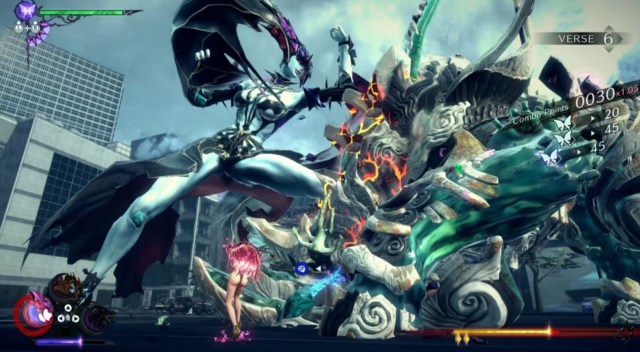 The d-pad is further tied to a trio of summons, which are ruled over by a magic meter/MP system. Demon summons generally put Bayonetta in place while they’re out, and have their own nuances, abilities, and combos. You can even work them into combos, and a few of the demons that I can’t spoil here allow for some insane possibilities. At first I found myself wanting more out of the demon summoning system, but once you start unlocking more and fleshing out their own skill trees (you can boost each weapon and summon separately), it all came together, and the power fantasy came across nicely.

It’s all so seamless. You can dodge, enter witch time, summon demons for a punish, swap mid-summon for an area-of-effect attack, then quickly cancel out of everything back into another dodge. It’s just as fun to punch someone across the room and slowly riddle them with bullets as it was in the original Devil May Cry. There are some extremely badass and tense boss fights to tackle, including a few of my favorites in recent memory.

Funnily enough, more so than perhaps any character action game before it, I found myself experimenting with everything. Typically there’s at least one weapon I leave behind, but I made a concerted effort to unlock the potential of all of the tools Bayonetta 3 provided, and reaped the benefits. I started finding what I meshed with, raising my end-of-level rankings as time went on. 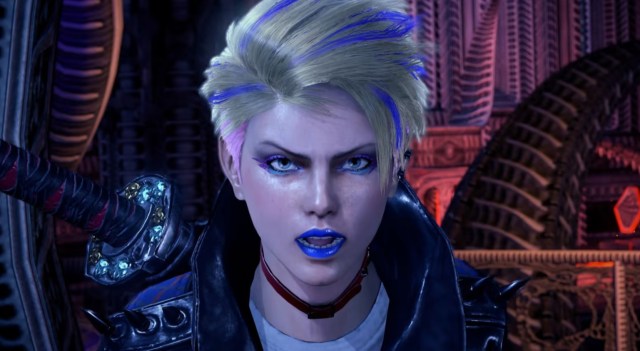 My one errant foundational complaint about Bayonetta 3 is that I wish some of the zones were a bit more expansive. Platinum is gifted at crafting dynamic areas that are fun to fight in, but some locales are cordoned off by an impassable mist too much for my liking. We’re given access to unprecedented access to unique traversal powers in this entry, and I wish there was more of a chance to use them. It’s not all bad though.

As far as side content goes, there’s a lot of it! Each stage has multiple optional arenas and secrets (which usually include some sort of combat challenge or twist, or gathering cubes on the map in a quick fashion), on top of multiple achievements to clear that are level-specific. There’s also a postgame of sorts that I can’t discuss here (but will once the game is out). It took me roughly 10 hours to finish, at an exploratory pace. A direct shot will no doubt make for a shorter run.

For everyone else, there’s a casual difficulty (plus, clicking the left stick will tell you where to go) as well as a “naive angel mode,” which alters the game’s character models. You can also continue from completed chapters (with checkpoints), peruse the art and music gallery, unlock items for Viola’s room, boost your skills, acquire new equipment/items, and go for cosmetic unlocks (which can be used to customize the look of the “main” Bayonetta of the game, as well as take on the visage of the multiverse versions). It’s refreshing, in 2022, to boot up a game and just hit “play,” with nothing else to juggle.

In an early tone-setter for the game, you’ll water ski as a giant demon dragon, and it only gets wackier from there. When playing Bayonetta 3, much to my delight, I had no clue what was going to happen next at all times. I was absorbed, and between the crazy story, the environments, and the action system that’s been refined through two prior games (and years of experience), I had very little downtime. It’s pretty much everything an action fan could want.