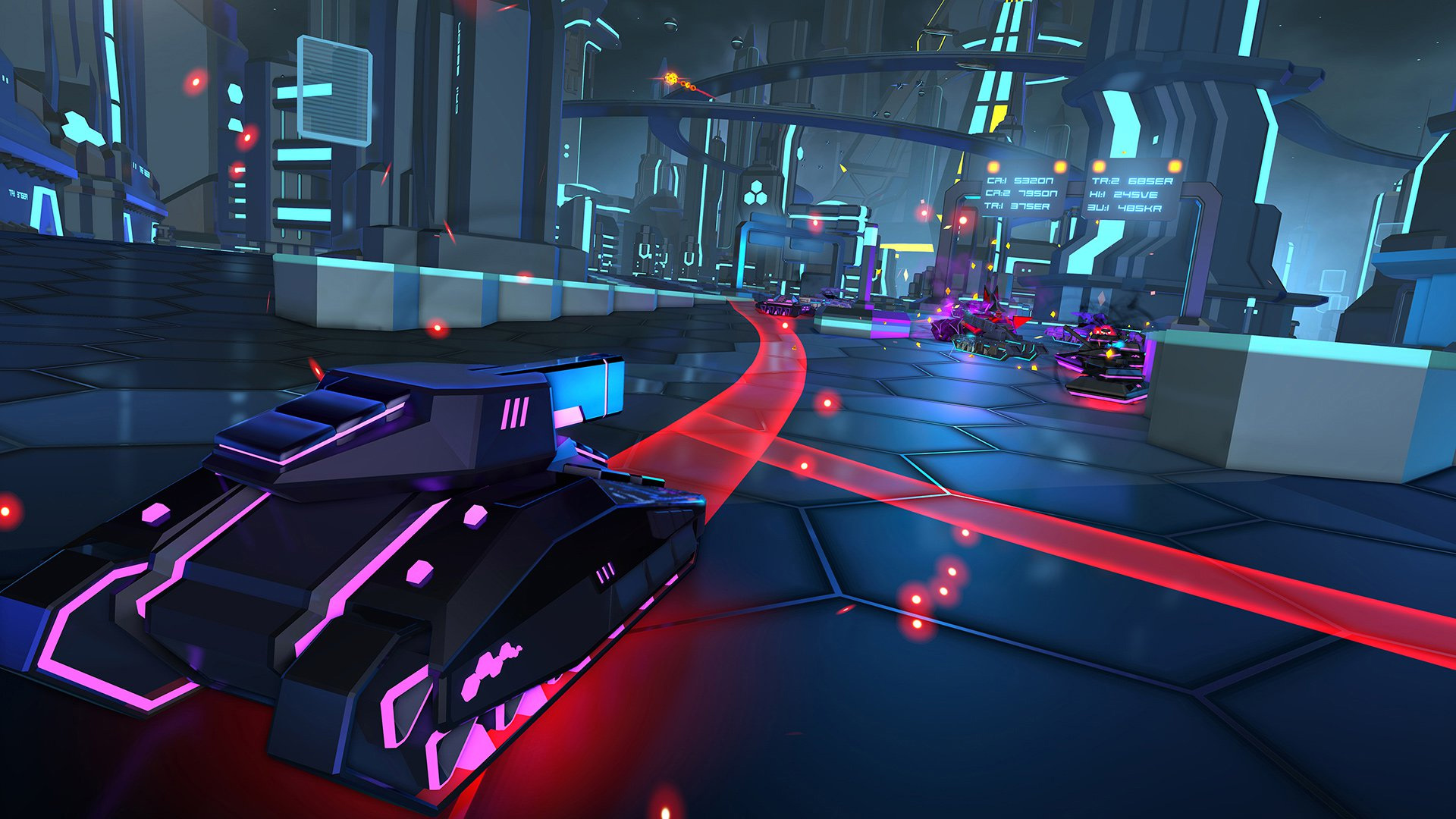 Out of all the PlayStation VR launch games, none was a bigger question mark for me than Battlezone.

Maybe I’m underestimating the appreciation and allegiance for this classic arcade property, but ever since hearing about Rebellion’s 2016 reboot, I wasn’t sure what to make of it. The more I learned about the game, the more intriguing it sounded. Four-player online VR co-op? “Neat!” A roguelike campaign design? “Oh… huh.” A full-on $60 price tag? “Gee, someone’s confident about our spending habits.” 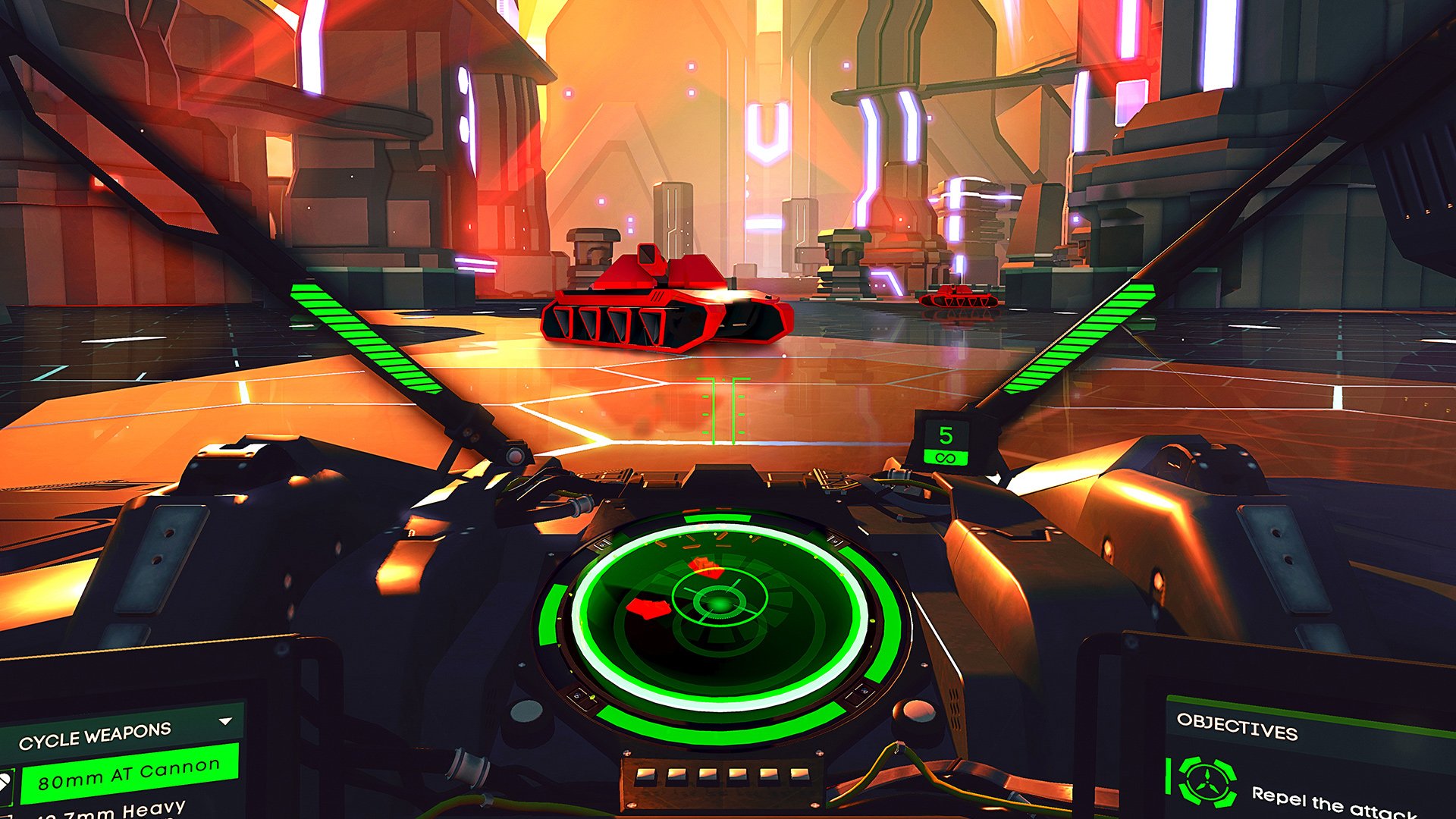 With all that said, Battlezone greatly exceeded my expectations — at least to start. Its first-person, in-cockpit view is undeniably cool to experience wrapped around your periphery, and it makes for a terrific early impression. Your tank feels like this beast of a machine. It seems so huge! And the simple but effective art direction lends itself well to the limitations of the PlayStation VR, where the picture quality is bound to take a hit in crispness compared to a high-def television. You get used to it.

Rebellion took a bit of a risk by placing its arcade-style tank combat game inside a permadeath, procedural shell. I’m still undecided about whether that was the right decision, but I’m leaning toward “Yeah, probably.” After picking your preferred tank (they have variable sizes and starter loadouts), Battlezone presents you with a board of tiles, with each one representing either a combat level, a text event, or a shop. As you clear them out en route to a final, dastardly volcano stage, the enemy forces — various types of tanks, mine-layers, aerial drones, and turrets — will grow stronger.

Assuming you pick up lots of currency from fallen foes and pump it into smart upgrade choices (e.g., active reloads, friendly healing, and shields) or superior weaponry (lock-on rockets are a must!), then you, too, will grow stronger in turn. But the balance grows way out of whack. Especially when pure-evil “Nemesis” boss tanks start prowling the map. In every game I played, whether alone or with a competent team, my run was destined to fail if there was any dilly-dallying whatsoever on the path to the final level. Even on so-called easy difficulty, it’s that tough. There are ways to tip the balance of power back in your favor, and if you have extra lives to spare, one slip-up doesn’t spell game over.

But it’s hard, if not impossible, to catch back up and actually win. In a lot of ways, I like these high stakes. I appreciate the heightened challenge for what is an otherwise straightforward game. That said, an entire mission category (base defense) feels unfair to the point of absurdity, and there’s not much point to a strategic board game-style world map if there’s seemingly only one strategy to employ.

Without this tough exterior, Battlezone would likely get real old, real fast. Its combat is satisfying in this chunky way that holds up across repeated playthroughs, but the missions themselves don’t do much to change how things flow. You’ll hit turrets from afar. You’ll boost to dodge stray fire and then promptly stop to recharge your shields when you’re about to be overwhelmed. With teammates — and so help you god if you don’t have teammates, particularly ones who communicate — you’ll huddle together to heal and perform revives as needed. You’ll get far, but it’ll likely be for naught. In my countless attempts, I’ve prevailed only once. I felt pure elation. But the oh-so-close, nearly-there failures are swift and brutal. It doesn’t help that most of Battlezone‘s permanent unlocks are the same weapons and abilities, but with better stats. You still have to buy them each run. Not much of a consolation prize.

While I would argue that Rigs: Mechanized Combat League is by far the superior online multiplayer game for PlayStation VR, if its frantic in-mech motion is too much to handle or you’re otherwise more interested in an engaging cooperative experience, this fits the bill nicely. There are some glaring balance issues for Rebellion to work out, and Battlezone is far less advisable as a solo game, but damn if it isn’t thrilling when everything comes together and your team perseveres against all odds.