The Kid types the intro to his review, knowing what must be done. He takes a pause to think of something devastatingly clever to say, but he’s a videogame reviewer, so he knows he’ll fail. He types another sentence. Another sentence still. The words flow from his fingertips like fine wine from a spilled jug at a party where everybody’s wearing something nice.

He pauses. He looks at his witty little lampoon of Bastion‘s narration. He wishes it was representative of what Bastion actually is. 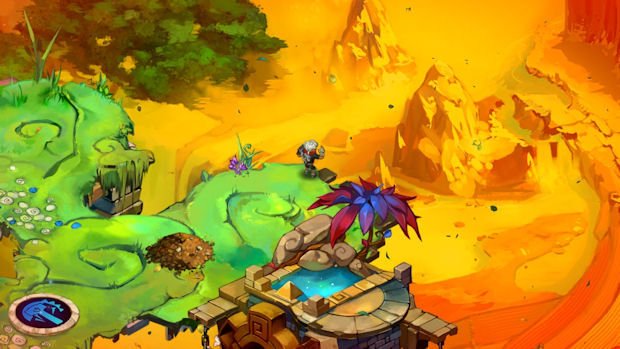 Bastion instantly endears itself to those who grew up with such titles as Secret of Mana, taking the form of a traditional action role-playing game with plenty of hack n’ slash combat and cool weapons to discover. Players step into the shoes of “The Kid” in a world torn apart by an event known only as The Calamity. The silent hero becomes embroiled in a quest to repair The Bastion, a safe haven that might be able to restore a world that has become utterly shattered.

The Kid has to fight his way through a variety of dungeons that float freely in the sky. Each dungeon builds itself around his footsteps, and a variety of monsters — who themselves are just trying to cope with the Calamity — stand in his way. Throughout the course of the adventure, The Kid’s movements are narrated by an old man who delivers the story with dry grittiness and evokes memories of old cowboy films.

As the game progresses, The Kid unlocks various melee and projectile weapons. These range from heavy mallets and flame-spewing billows, to repeater pistols and muskets. Every weapon can be upgraded — using crystals earned from fallen enemies and materials that are found or bought — with a variety of unique and interesting perks. For instance, you can choose to have your Billows do more damage, or create a wider spread of flame. With each perk tier, you can only choose one upgrade from a possible two, although if you find you’ve made a mistake, you can always swap upgrades later. 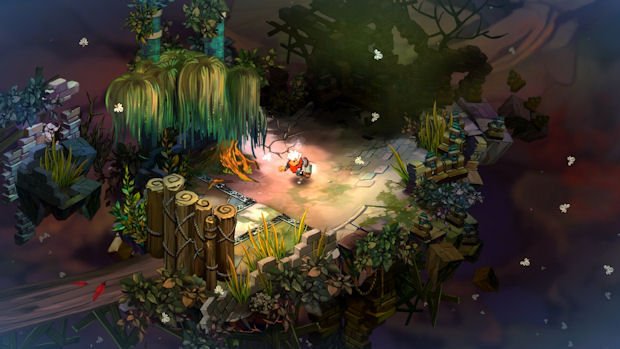 The Kid has access to Secret Techniques, which are found in the dungeons or bought in shops. These are often tied to specific weapons, although there are standalone skills, such as the power to summon a “Squirt” monster as a friendly accomplice. Passive abilities are equipped as various tonics, and allow The Kid to carry more health potions or withstand greater attacks. There is also a cool risk/reward system in place with Gods. Activating a God at the shrine creates effects in dungeons, such as making enemies tougher or quicker, but the reward is greater XP and cash. Any number of Gods can be activated once discovered, meaning players can fine-tune the level of challenge with an eye to gaining more loot.

Players get to choose two weapons (though if he discovers a new weapon in the field, one of his choices will automatically — annoyingly — get replaced), one secret technique, and his trusty shield, which can counter attacks when used to block at the right moment. Countering becomes a crucial way of dealing with projectiles later in the game, as sending a missile back to its owner is a quick way of dealing with annoying foes.

The core of the game revolves around visiting dungeons, finding an item required to restore The Bastion (these items change as the plot thickens) and rebuilding the hub area. As you complete dungeons, you’ll be able to build various establishments — a Forge to enhance weapons, a Shrine to activate Gods, a Distillery to equip tonics, and more besides. Rebuilding the Bastion becomes a strangely addictive and satisfying task, although your only real job is to place pre-set buildings on pre-set locations. 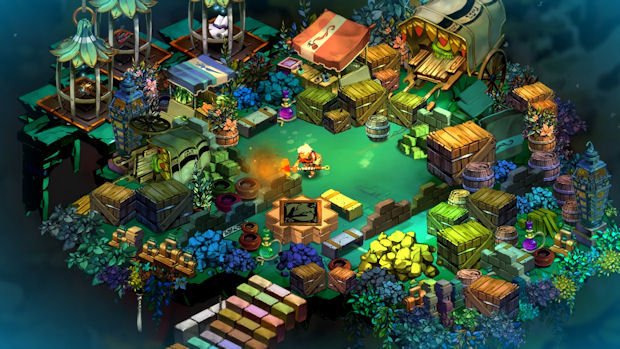 At its heart, Bastion is a collection of wonderful ideas with heaps of promise. Sadly, it also has some glaring problems and often fails to live up to the lofty goals it has set itself. For all its style and attempts at depth, Bastion plays no better than an average browser-based free-to-play MMORPG. Even the art style, as pretty as it is, makes one think of the types of casual RPGs you see advertised on Web site banner ads, a feeling enhanced by the rudimentary animation. Close-quarter combat consists of bare-bones button mashing, and the auto-targeting system barely works. Ranged attacks are just as likely to miss as to hit, while melee is often a total crapshoot.

The whole “floating dungeon” gimmick leads to frustration as well, despite looking incredibly cool. Thanks to the 2D art and isometric perspective, it’s all too easy to fall off the game’s many, many ledges and lose valuable hit points. The perspective and art also conspires with the targeting system to make combat doubly irritating. You only have a rough idea of where enemies are on the map thanks their 2D nature, so missing an opportunity is far from uncommon.

This is not to say the game is horrible, of course. The desire to unlock new weapons and loot is compelling, and a number of armaments, such as the aforementioned Billows, can be enjoyable to use (though just as many weapons feel ineffective and boring). There’s also a wide variety of content and extra challenges, all with their own useful rewards. The game’s story is promising, but the reliance on a single narrator often leads to an unpleasant alienation between player and plot. 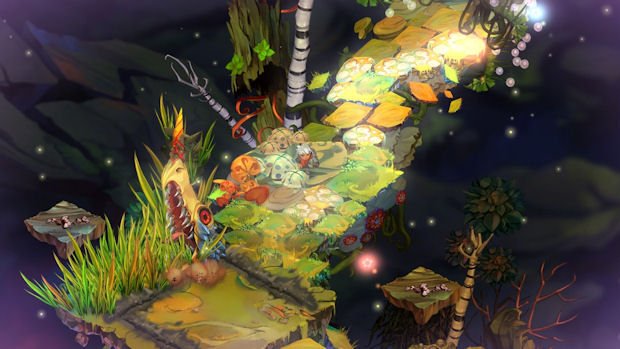 It’s worth noting that the narrator, despite all the hype surrounding his ability to dynamically commentate your progress, is mostly a case of smoke-and-mirrors. He’s not really that dynamic, only making a few token comments on fairly standard activities. Sometimes he’ll say things that don’t really gel with your actions (for instance, saying The Kid “doesn’t stop” even if you’ve not moved the character) and it’s made far, far too obvious just how blatantly scripted it is. I’d go as far as to say that Bastion‘s narrator does nothing that hasn’t been seen already in inXile’s A Bard’s Tale, which earns more credit due to the fact that it was more entertaining.

This is Bastion‘s main problem. It provides the illusion of depth and freshness, without really delivering any substance. There’s a gorgeous soundtrack and bright visuals, but they serve only to garnish an unfulfilling blend of oversimplified button mashing and disconnected narrative, too blandly delivered to draw one in, and too vaguely presented to gain an emotional edge.

There is fun to be had with Bastion, most certainly, but my advice is to keep one’s expectations low. If a player goes in expecting a simple dungeon crawler with little to offer besides mindless combat and the base joys of acquiring power, then one will leave quite satisfying. Expecting a revolutionary experience with dynamic narration and more than a few tugs on the heartstrings will, inevitably, lead to deflation. Bastion presents the idea of a dynamic, engaging roleplaying experience, but the product itself is a far cry from its ambition. 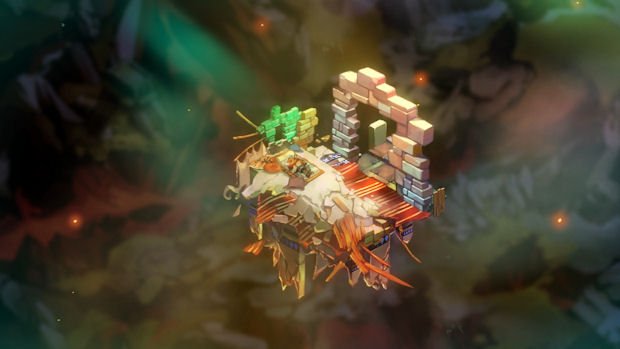 Is the game worth playing? Certainly. It’s a decent little adventure that will provide enough solid gameplay to be worth the money. Just make sure one expects no more than that, and it’ll be a most worthy purchase. Bastion is fun enough for what it is, but it does not transcend to the levels that it would like you to believe it does.