Back in January, I wrote up an impressions piece for my hands-on with the Balan Wonderworld demo, saying it was saving its best bits for the final game. That statement wasn’t really supported by any concrete evidence, it was more wishful thinking based on my memories of the wonderfully imaginative reveal trailer from last summer.

Now that I’ve played through the full game, I’m happy to say that I was right. Balan Wonderworld did indeed save its best levels, costumes, and ideas for the final game. However, if you hated that demo — and I know a lot of people did — nothing here is going to change your opinion of it. In fact, there’s a good chance you’ll actually end up hating it a whole lot more. 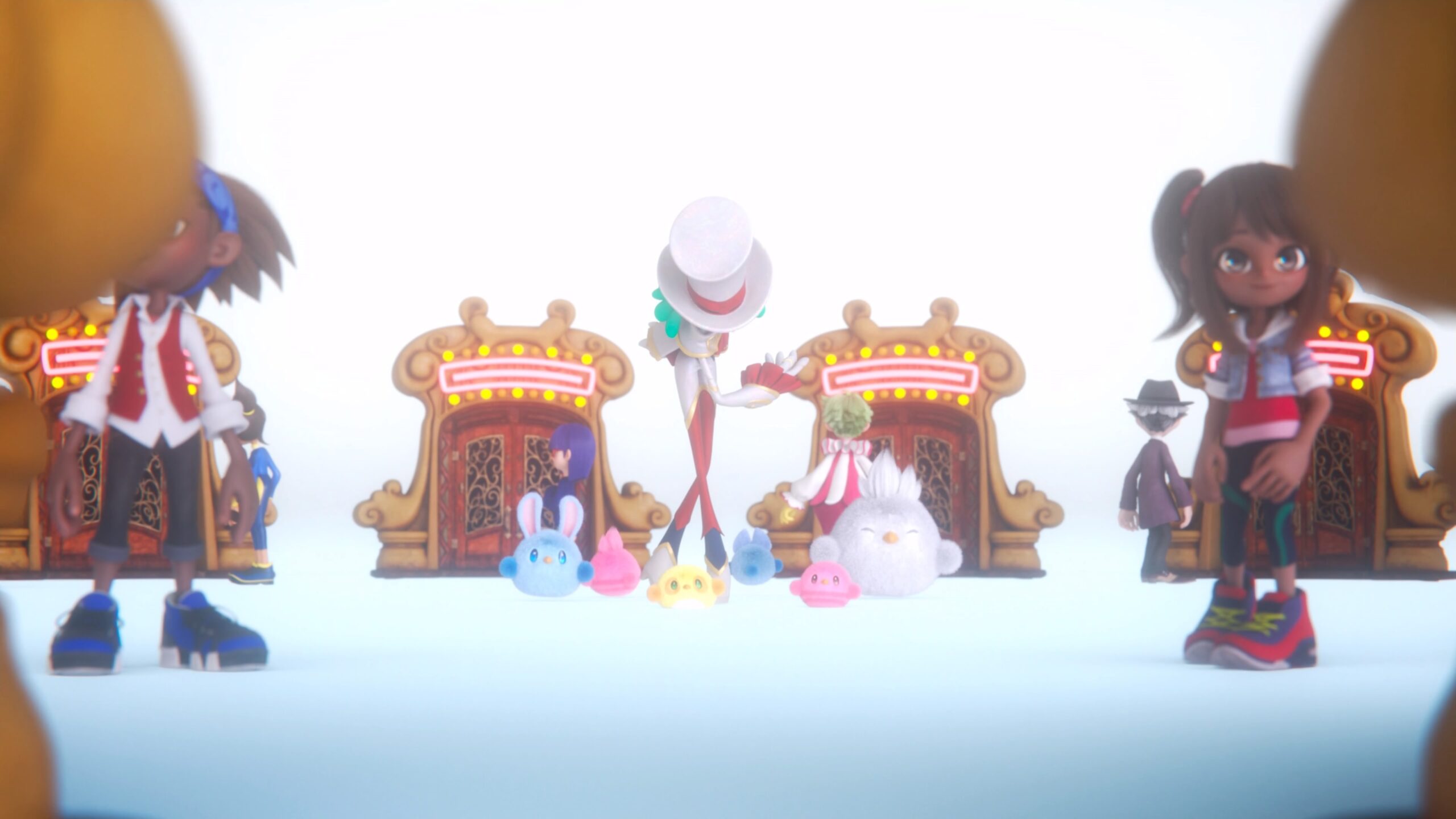 If I were to sum up Balan Wonderworld in a single word, that word would be antiquated. This is a new game that feels very, very old. It’s an artifact of the mid to late ‘90s, calling back to the golden era of the mascot platformer, a brief period when developers blessed the world with weird and experimental platform games like Bug or Croc: Legend of the Gobbos. If you were to tell me Balan Wonderworld was actually an HD remake of some 1997 Sega Saturn title, I’d probably believe you because from top to bottom, this feels like something I played back when I was 13 years old.

And hey, there is nothing wrong with feeling a bit old. Retro games are as big now as they’ve ever been, and we’re still getting Kickstarters for “spiritual successors” to those titles we deeply adored as kids.

But Balan Wonderworld doesn’t just feel old. It feels like Yuji Naka and his team at Balan Company have ignored the past 25 years of progress made in game development. Because while much of this title pulls at the parts of the brain that control nostalgia, some elements are stark reminders of just how far the medium has come.

The game tells the story of two loners, Emma and Leo, who are pulled into a mysterious theater by the even more mysterious Balan. They thrust the two of them into an adventure where they’ll help other people with their problems. There are a dozen people in total to help and their issues range from dealing with a dead cat to feeling invisible to one very bad dolphin. For each of them, Emma or Leo will venture through two levels that are kind of themed around their personalities before heading into a boss battle the anthropomorphizes the struggle they’re having.

I think most people’s enjoyment of this game is going to depend on their appreciation for the level design concepts of early 3D platformers. We’re talking about very tightly packaged, linear stages with small, off-the-beaten-path areas to explore. It’s the type of level design where a risky jump into the unknown can send you to your death or reward you with a new power-up you wouldn’t have otherwise been able to get. And each level has several golden Balan statues to collect, with some that hide in plain sight with no clear indication on how to reach them. Collecting those statues is the real goal for every level as you need to have a certain number of them in your possession to unlock more stages. That sounds like gatekeeping, but it was mostly a non-issue for me.

I know this level design isn’t going to mesh with a lot of people, but I really like about 90% of the stages in this game. First of all, some of them are quite beautiful with strikingly vivid and dream-like art direction. It is just plain pretty at times. Second, I think Balan Company and Arzest pulled some of the best design philosophies from the mascot platformer era and cobbled them into something unique and sundry. There is simply a lot of imagination in the makeup of some of these worlds, and that extends to the boss battles as well. 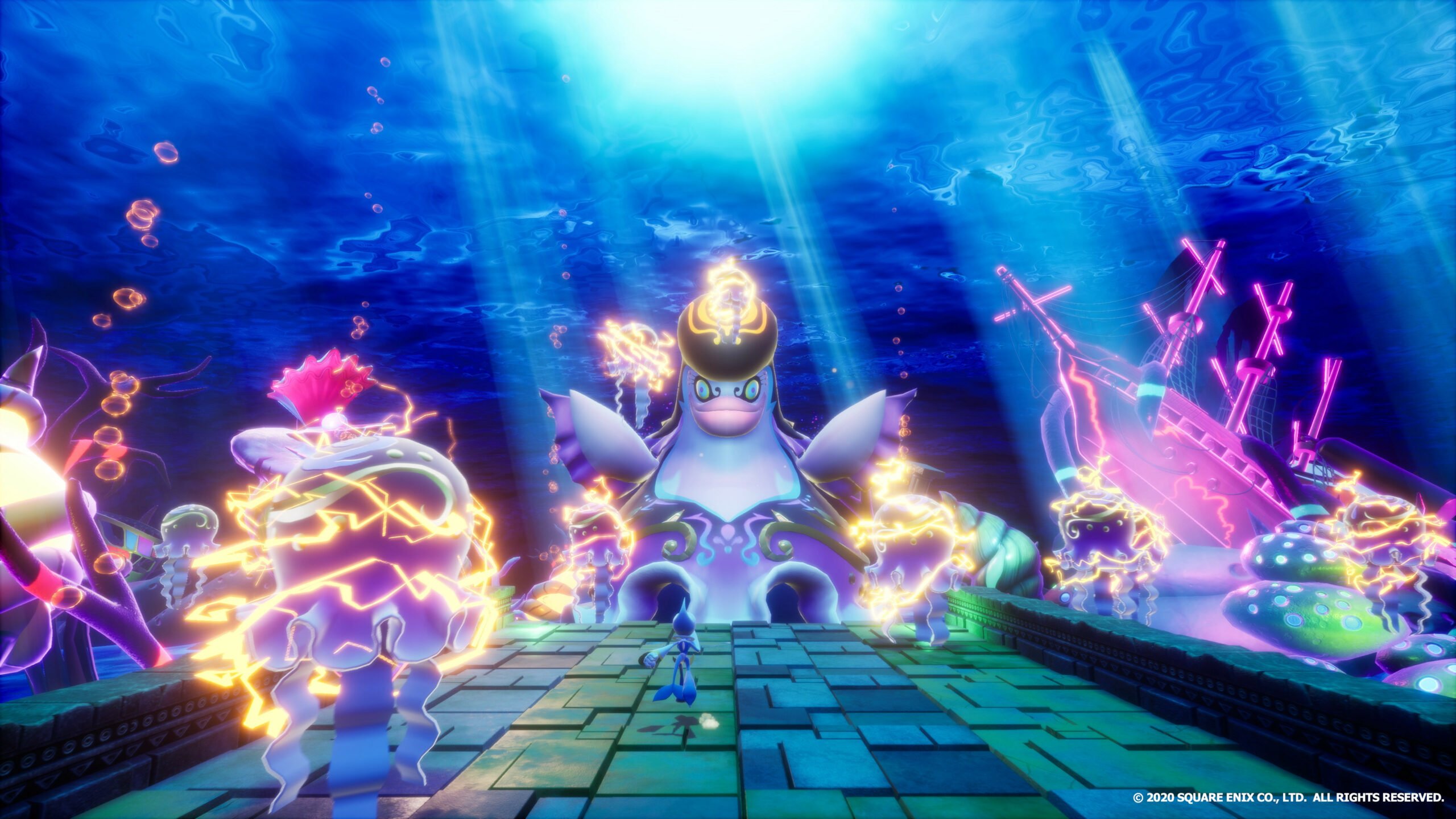 Easily the best part of the whole package, the boss battles of Balan Wonderworld ask players to take a step back and see the different ways in which they can be defeated. Boss battles grant three Balan statues upon completion, but only if you figure out the three different ways you can attack them. If you want to rush these battles, you can do that just fine. But if you want to master this game, you’re going to have to study them out. These boss fights absolutely drip with confidence from the developers, but they also put a spotlight on one of the biggest issues plaguing Balan Wonderworld: its atrocious and unacceptable costume system.

Similar to nearly every mascot platformer of the past, Balan Wonderworld has a gimmick it’s built around. Its gimmick is costumes. Each world will have a handful of costumes to collect, with three or four usually obtained organically and a few others you really have to search for. Like the original Sonic the Hedgehog, Balan Wonderworld has just one action button and it changes what your character does depending on the costume they’re wearing. Some costumes will let Emma or Leo jump, some won’t, so it’s important to have a good mix in the three you can carry at once.

What’s crucial to know is that once you unlock a costume, you don’t necessarily get to keep it. If you take any damage, you lose the suit you’re wearing and have to either go back to where you found it before or hope you happen upon it again. This means you might actually have to stock up on costumes. I certainly did, as some Balan statues are really tough to get. Not only that, but costume swaps are limited to checkpoints. So if the costumes you have equipped are not what you need but you know there is the perfect one in your wardrobe, you have to trek back to the last checkpoint to swap it out. 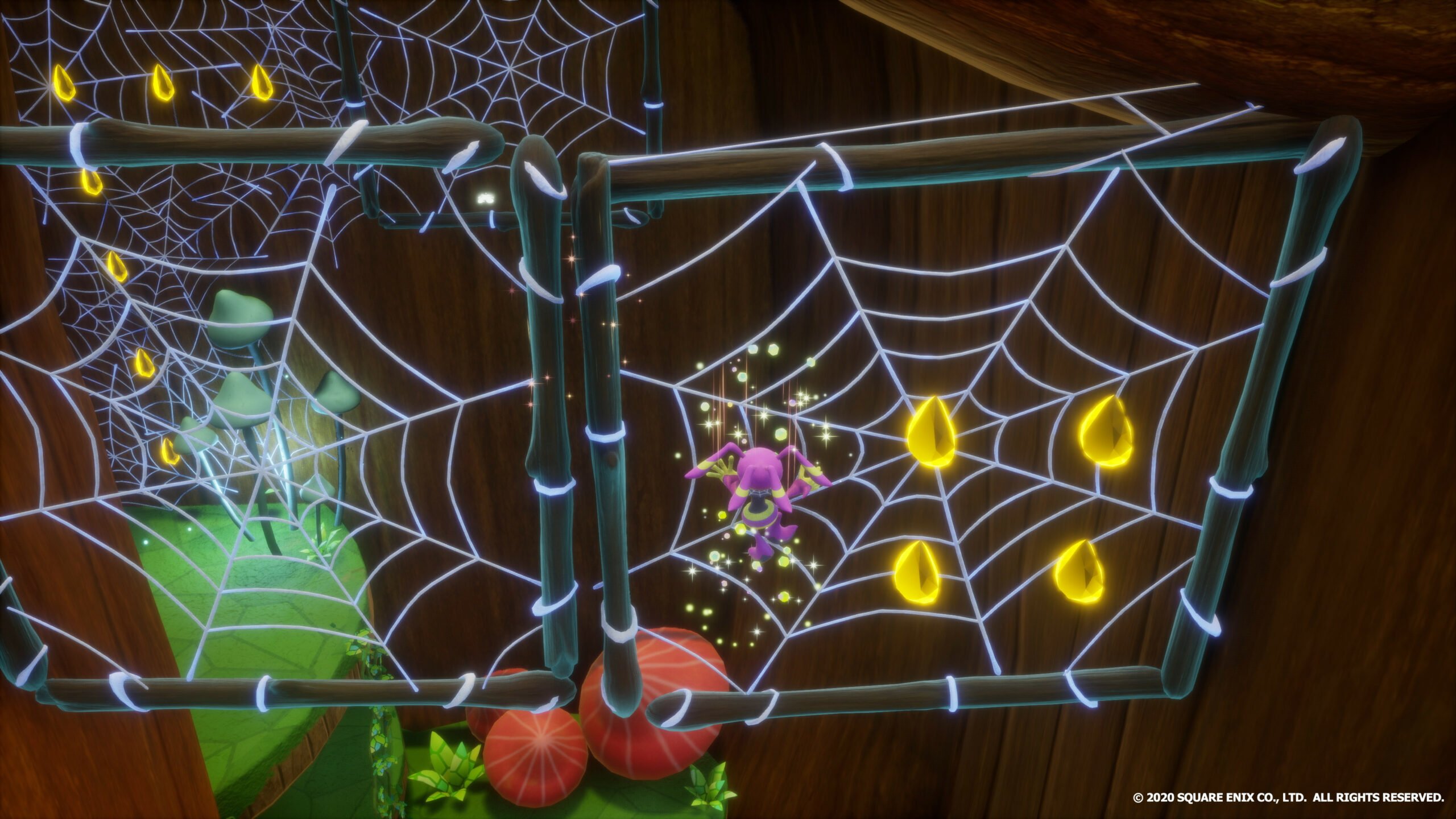 This really isn’t an issue early on, but it quickly becomes one as stages start to implement more concepts that are centered around these costumes’ abilities. What is a real shame about Balan Wonderworld is there is a wide breadth of costumes available, 80 in fact, but their depth is shallower than a shot glass. Some of them just repeat the abilities of costumes you collected earlier with a minor twist. Others exist simply to act as a standard element of gameplay most other titles wouldn’t require a special power-up for. Like, you can’t just carry a torch, you have to become a torch. You can’t just grind a rail, you have to dress up like a train.

And I cannot stress enough how dumb some of these costumes are. One of the early getups you unlock is Box Fox, which is a fox that will turn into a box. Players have no control of when the fox turns into a box, and if you happen to be moving when the transformation happens, that box will slide right off a cliff. I can see how that idea might be whimsical in theory, but in practice, it’s break-the-controller frustrating.

Had the number of costumes been whittled down and made more useful in how players can utilize them in the levels, it would easily make for a better experience. What’s here is clearly not the best possible execution of the concept, and it can be a bummer to reach a boss battle and realize you don’t have the appropriate costume for one of their attacks. But my appreciation for what Yuji Naka was trying to do with the gimmick buoys my feelings toward them. Unfortunately, there is a 10-ton anchor chained to that buoy that’s dragging it down, down, down into the deepest fathoms of contempt. It’s an anchor known as Balan’s Bout. 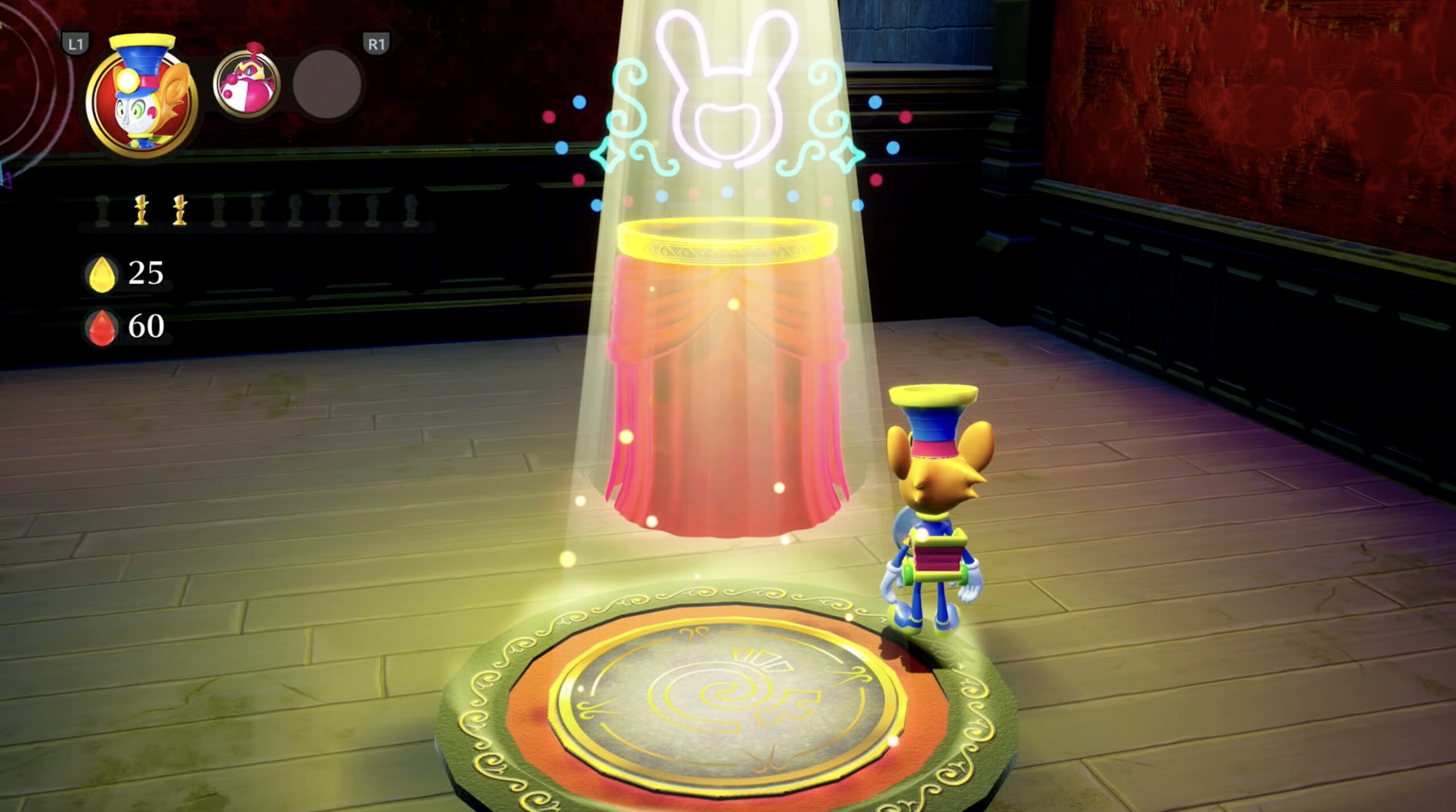 Kind-of-sort-of hidden on each stage is a big, gold top hat that’ll summon Balan for a series of quick-time events called Balan’s Bout. Here, you’ll need to rapidly press a button or time a single press of it as Balan lines up with a translucent image of themself. On paper, that doesn’t sound too bad, but it wears thin almost immediately.

First of all, it can be tricky to tell whether Balan has lined up with their image, creating the potential for getting a “great” rating for the QTE rather than an “excellent.” Anything less than the top rating is pretty much failing. While you will get an increase in the number of collectible drops you have with the completion of each Balan’s Bout, you need to get it perfect every time to get the Balan statue associated with it. Fail to do so, and you’ll have to return to the level to test your luck at it again.

Not only is there a Balan’s Bout in every stage, but later stages have multiple you need to find and complete. And while there is a variety of different QTEs within each Bout — like lining up Balan as they punch or lining them up as they blast whatever the name of the antagonist is — it’s more or less just you doing the same thing over and over again in every level, hoping to God you don’t accidentally press the button too early or too late to score the dreaded “great” rating. 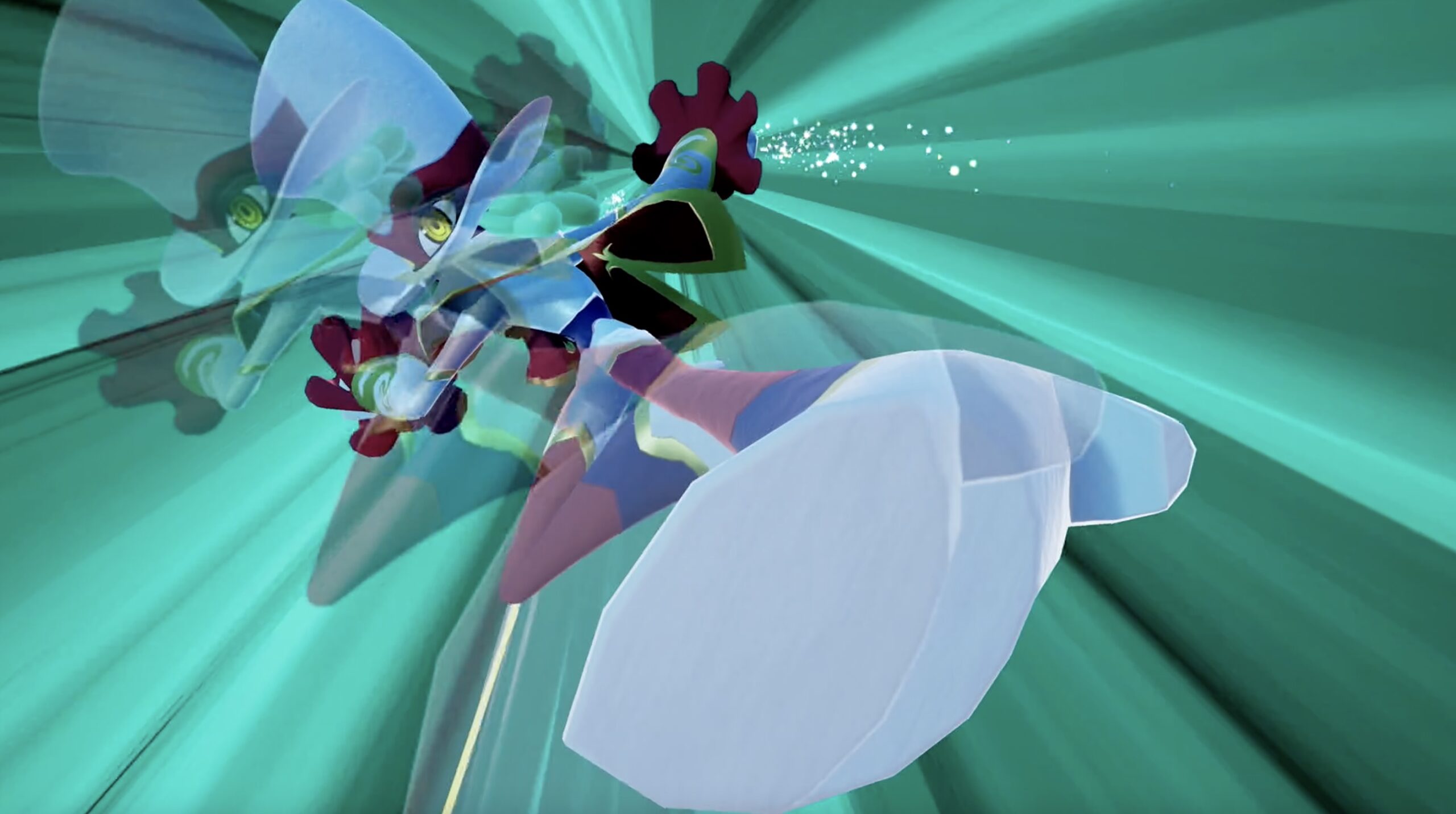 Let me be clear: I hate Balan’s Bout just as much as Roger Ebert hated the movie North. I hate it. I hate, hate, hate that somebody thought this was an activity players should have to do multiple times. Even if I had perfect runs of every Balan’s Bout I came across — never messing up, never failing — I would still hate the fucking thing.

None of the mini-games sewn throughout Balan Wonderworld are any good and, if anything, pull players away from the real joy of the classic platform fun. They’re begrudgingly necessary though as they do increase the number of drops you collect in each stage, drops that are needed to feed Tims, little chick-like rabbit dollops that join you on your journey. To be clear, I have no idea what the hell the Tims are for and why it is I’m helping them build their tower. Maybe that’s answered when the tower is complete, but I honestly don’t know how much I have left in me to further explore the post-game long enough to collect enough drops to build that thing.

Like I said at the top of this review, your enjoyment of Balan Wonderworld is going to depend on your tolerance for primitive 3D level design. Strip away the unnecessary costumes and their poorly implemented management system — and fire those Balan’s Bouts into the sun — and you might have a nice throwback to a more experimental time of platform gaming, one that would be easier to recommend. But sadly, you can’t just strip those elements away. They’re here, and they’re ruining what is otherwise an enjoyable rewind to the golden era of the mascot platformer.