The first Axiom Verge was a bit of a surprise to some people, myself included. I wasn’t a diehard fan of the Metroid-style genre before that, and by the time credits rolled, I was eager to dive as far into it as I could. It was something that had a little bit of new, a little bit of the old, and found just the right way to mix it all into an adventure that felt both familiar and fresh.

That’s my way of saying Axiom Verge 2 carries some expectations, I think. And that’s not necessarily to its detriment; not only do I think Axiom Verge 2 is a pretty good game, it also feels like a solid successor to the first, even if it does so in weird ways and takes some time to get there. Axiom Verge 2 follows Indra, a tech CEO who finds herself plunging into alternate worlds filled with biotech monsters and strange, godlike beings, much like Trace in the first Axiom Verge. As you explore the world, its structure will immediately start to feel familiar; some ledges are just out of reach, or some rocks look suspiciously fragile, and you’ll venture across this new plane to find the equipment—Arms—you’ll need to get through them.

One of the more noticeable differences in Axiom Verge 2, for me, was it felt like it put the story and universe building a little more at the forefront. This isn’t a bad thing, but at least early on, it feels like big names and references start getting chucked at you before you have time to really contextualize them. I’d have to flip back through various notes I’d made to myself to remember which character knew who and how, and how some names connected to others. I eventually had a good grasp of the world, especially as the story focused more on current events and some surprising, fun twists, but I felt a little out of my depth lore-wise early on. Axiom Verge 2‘s biggest difference, though, is how it approaches your equipment. Trace largely relied on firepower and various guns, while Axiom Verge 2‘s Indra uses a mix of melee weapons and a boomerang. For most of the early game, and even as you get later on, it’s going to feel pretty different from what you’d expect. You have to get closer to enemies, and your tactics will be considerably different.

There are vision cones, providing little opportunities for stealth, though I often ended up foregoing that and opting for direct combat instead. Hacking, though, became my bread-and-butter. Indra is, eventually, able to hack objects and enemies, altering their source codes to impede or control them. It might be as simple as rewriting a door switch to open instead of close, or as complex as disabling weapons systems on a big foe or turning a robot against its allies. 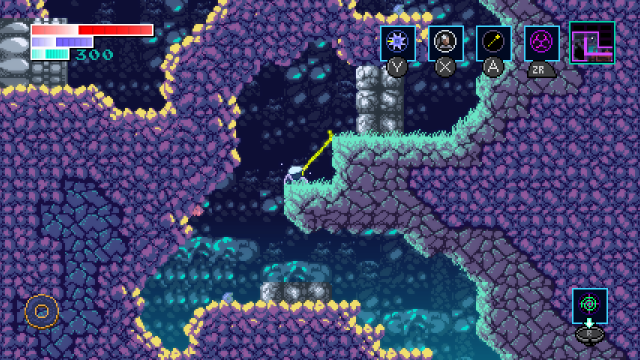 Then there’s the drone, returning once again to provide more movement options and alternate routes. I’ll say, without too many spoilers, that what Happ does with the drone in Axiom Verge 2 might be some of my favorite Axiom Verge content, period. It’s actually incorporated into the story in a very interesting way, and movement-wise, it feels incredibly fun to flit around as. This might be because, early on, Indra herself doesn’t have so many movement options; her big early-game upgrades are things like getting to climb up walls, but that ends up paling in comparison to later-game movement abilities.

Once you get to the latter-half of Axiom Verge 2 though, some really fun movement options begin to open up. The Grapple is the most familiar returning ability, while others feel either like fresh interpretations of old movement skills or completely new. As you explore this big, interconnected alternate Earth, it starts to feel really rewarding to have gained a mastery of how your character can move through it.

A big piece of that is the Breach, a recently revealed ability of Indra’s to send her drone in and out of the plane between worlds. It essentially acts as a second map, though a little more condensed and focused on the drone. At first, it’s just a way to “tunnel” from one area to another. By story’s end and after a few upgrades, it’s easy to use it as a way to slip in and out of the world, bypassing obstacles by moving through the rifts that allow passage between the overworld and the Breach.

It’s a great feeling to master the world of Axiom Verge 2, and uncover new routes for progress or secrets hidden within the dual-world layout. This also means its earlier hours are a little slower, and contain fewer moments of “a-ha” compared to later on in the narrative. It isn’t rough, just slow, and it’s hard to latch onto something to drive you forward.

A big reason for this, and another big design change from the first Axiom Verge, is that almost every boss in the game is optional. Rather than opponents with big, labelled boss doors and conveniently placed save rooms nearby, bosses just sort of inhabit the world. An early one, for example, resides in the general path of your progress, but it’s just as easy to avoid it as it is to kill it. One particular boss, an underwater worm-leviathan, hounded me whenever I ventured into its domain. It’s killable, yes, but you have to solve how to do it, and it’s not necessary to take it out to see the game through.

These giant beings ended up being more like optional bosses, hidden away in special rooms, or massive beasts who I had to learn to navigate around or deal with somehow. It made them feel a bit like colossi from Shadow of the Colossus in that respect, which is a cool variation on the idea of bosses in a Metroid-style game. But it also made combat feel a little less required for progression, and contributed to the fact that I spent a lot of the early game running away from enemies or avoiding them rather than fighting them. Ultimately choosing to take on those bosses—whether right away or later on, once you have some more tools and better weapons to work with—rewards you with Apocalypse Flasks, which can also be found littered around the map. These little bottles reward Indra with points to upgrade her various abilities, and there are a fair few to choose from, ranging from health and damage to expanding the search range of her hacking ability faster.

Outside of upgrading the level of your hacking skills, which I think is a must-have early on, it’s pretty much up to your playstyle how you advance. I started out putting points into hacking, but eventually explored other branches like Indra’s axe damage and the drone’s attack speed. Indra’s offensive options are a little limited compared to the wealth of guns Trace acquires over the course of the first Axiom Verge, but they also work well in concert, proving that sometimes less is more.

It also bears mentioning that the music and art of Axiom Verge 2 are both stellar. Happ does a great job of mixing old with the new in Axiom Verge 2‘s score, and the design of the world(s) Indra explores is fantastic. I ended up really enjoying how interconnected the world was, especially as the Breach opened up new ways to move through it, and every area has a very distinct layout and visual style to it. Axiom Verge 2 also just feels very different. If you’re looking for a fresh take on a Metroid-style game, one that uses more melee skills, optional bosses, and layered map exploration, that’s a good thing. If you’re looking more for a traditional Metroid inspiration, one with guns, boss rooms, and a host of weapons, this isn’t really that.

Even when Axiom Verge 2 wasn’t hitting perfectly for me, it feels different and very much its own. Things start out slow, but give it a little time and Axiom Verge 2 really gets going, playing off expectations with clever alterations of the original game’s conventions. It’s dense as ever lore-wise, and it’s got some good music and worlds to move through. It’s a follow-up to Axiom Verge that doesn’t content itself with a simple recitation of the first game’s high points, and if what’s detailed above sounds like your jam, you’ll probably have a good time with it.