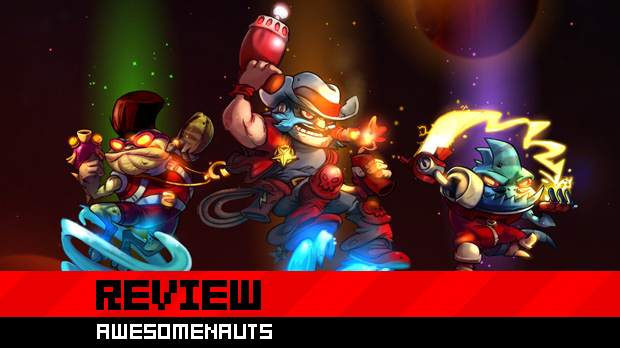 Multiplayer Online Battle Arena (MOBA) titles have seen an enormous surge in popularity in recent years, and for good reason, but to date they’ve been restricted to the PC. These highly skill-based, competitive games offer the joy of killing players and computer-controlled enemies, with that one-more-round addictive quality when it either goes well, or when you demand satisfaction after a loss.

Now it’s time for console owners to get a taste of the action in 2D with Awesomenauts, a title that marries MOBA tactics with the frantically competitive platforming action from the likes of Super Smash Bros.. 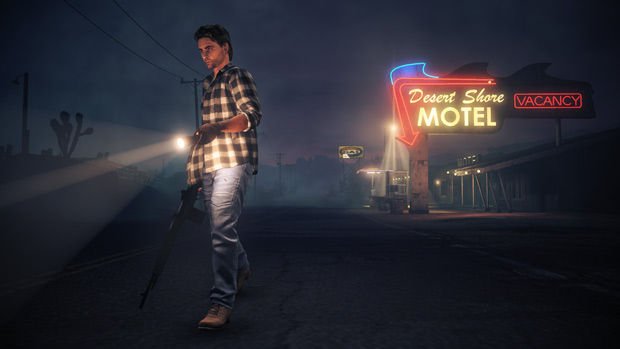 For those new to MOBA, or “action real-time strategy,” the concept in Awesomenauts is relatively simple. Two teams of three players start out on opposite sides of the map, while computer-controlled droid units (creeps) spawn at a regular interval and make their way to the other side through different paths (lanes). When left to their own devices, these similarly powered droids will meet the opposite team’s droids somewhere in the middle of a level, maintaining a balance when players don’t intervene.

When players start killing droids, a team can push to the other side with the intent to destroy a “drillcore” which wins you the match. Along the way, turrets block the path to the drillcore, and enemy players will aim to kill both you and your droids. It leads to a tug-of-war style of play where every player death on one team is an opportunity to push forwards for the other.

Awesomenauts offers six unique heroes to choose from. Each hero has a button dedicated to basic attack and jump actions, which vary in use between heroes. Some can float, other can double-jump, and a flying monkey can, well, fly. These basic attacks are supplemented by two special skills for each hero, which need to be unlocked with the money (Solar) you earn throughout the match.

While having only two skills per hero may sound a bit limited for MOBA veterans, they work extremely well with the fast-paced action and the platforming controls required to survive encounters and to score kills. For example, Leon Chameleon, an assassin DPS hero, can perform a single-jump and a slash attack at the start, and unlock clone and tongue-attack abilities as he progresses through a match.

Creating a clone cloaks you, leaving a clone dummy behind as a distraction for you to attack players from behind, or when they least expect it. Collecting more Solar lets you upgrade the clone to move, or even attack with actual damage per hit, and increase the damage you will inflict with your first attack upon decloaking. The tongue, on the other hand, pulls players towards you, and can be upgraded to have a longer range, lifesteal properties, deal more damage, etcetera. 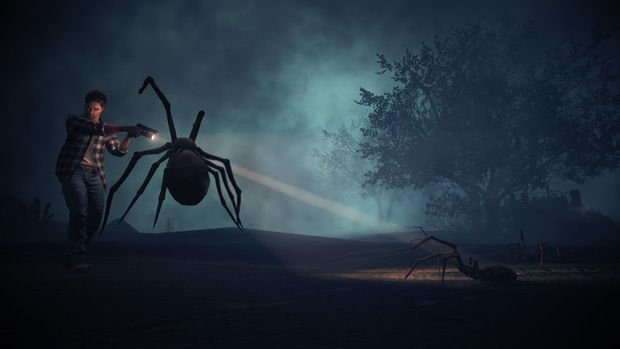 Choosing between the two skills and upgrading them to fit your style (in the case of Leon) allows you to either go for a moving clone very quickly, in order to score some early surprise kills, or to focus on upgrading health and basic damage potential to opt for an up-close-and-personal approach using his tongue pull. Or, once you know how and when each ability is best used, spread your Solar between the abilities to counter enemy tactics.

The Solar you require for all skill and stat upgrades is generated automatically at a very slow pace, while respawning one-Solar and five-Solar “coins” dot the map. Destroying an enemy droid nets you five Solar, and last-hitting a droid (a MOBA convention) pulls the coin directly towards you. Killing an enemy player is rewarded with a big Solar bonus for you, and half as much for your co-players. So even if you play a support role and don’t score as many kills, you’ll still benefit from your team’s performance. Should you be unfortunate enough to die at the hands of a droid or a turret, however, you’ll lose a bit of Solar and the kill reward is dropped on the ground for anyone to pick up.

As basic as the premise is — run in one direction and kill everything — Awesomenauts offers a vast amount of depth for those who are willing to look below the surface. In part this is due to the way you have to think about how you should spend Solar early in the game, and what kind of upgrades you want to end up with during mid-game. Becoming reasonably proficient with a single character takes a couple of rounds if you are familiar with this type of game, but mastery can still elude you after days of play. 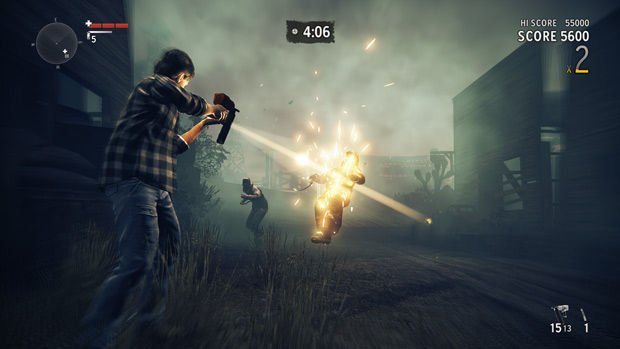 Another aspect which adds to replayability is the loadout system. As you play matches and collect experience points to level up, you’ll not only unlock new heroes and maps to choose from, but different ability modifiers to assign to your loadout, which can then be purchased and upgraded during a match. Some of these unlockable abilities offer different ways to increase the damage output of your skills, others add different properties (support hero Voltar’s heal ray can be turned into a damaging attack, for instance) and yet others offer more tactical offerings.

Even if you master one hero with one loadout build, which will take quite a while, you’ll always have different builds to try out and master. Better still, no one build is superior to any other, as player skill defines how effective they are. The same is true for the heroes themselves; the new heroes you unlock are in no way whatsoever better or worse than the two heroes you start out with, unless you are incapable of learning from your mistakes and blame a number of unfortunate deaths on the overpowered-ness of whoever killed you. The balancing is excellent, provided you can adapt to evolving situations and change your tactics — a basic aspect of any MOBA.

Although Awesomenauts is a multiplayer game at heart, it can be played in a solo mode with and against bots on each team. The online system in place is rather good, allowing you to start a match with up to three players in local split-screen, with the option to your local team online from the same lobby. Other players will take the place of any bots at any time during an online match, and jumping into a game already in progress gives you a variable amount of Solar to quickly catch up to the average level of heroes in the match, meaning you are never at a big disadvantage. 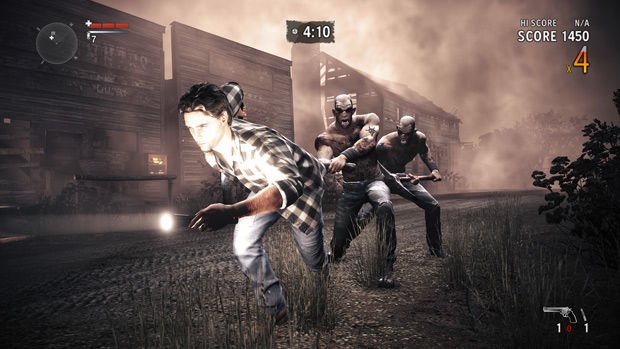 All the individual components in Awesomenauts are lovingly well-crafted and fun variations on typical MOBA games, but while platforming and killing stuff is always fun, the separate parts alone wouldn’t matter if the whole wasn’t fun enough to play for an extended period of time. Thankfully, it is. In fact, it’s ridiculously enjoyable. Whether you play against friends, with friends, or find yourself in a 1-on-1 online match with two bots on either side — which have an AI that rivals the skill of the average player — there’s a sense of sheer joy as you clasp your controller during heated battles, or curse a team when they work together in an effective way to punish your mistake with a quick kill.

The colorful clean artwork and the charm of the heroes, who each have their own theme song and who are inspired by ’80s-era cartoons, make sure there is always a smile on your face while you are transfixed on the often frantic action. That’s not to say there aren’t a few problems that can be found in other MOBA titles as well.

Health bars can become obscured when six players are duking it out in close range, the minimap only gives a rough indication of tower health, and sometimes a melee attack has a longer range than the animation would suggest. The AI is good, if predictable with its patterns for some heroes, but at times it is too good for a starting player. Having a few difficulty options for the bots would’ve helped to allow novice players to practice, although there’s something to be said for learning the hard way.

These are small issues that can occasionally be bothersome, but they are also mitigated as you become more experienced through the many matches required to hone your skill. Knowing your hero’s health level quickly becomes a second nature after you die a lot in the first rounds you play, until you’ll eventually know exactly how many hits you can incur before you have to move back. 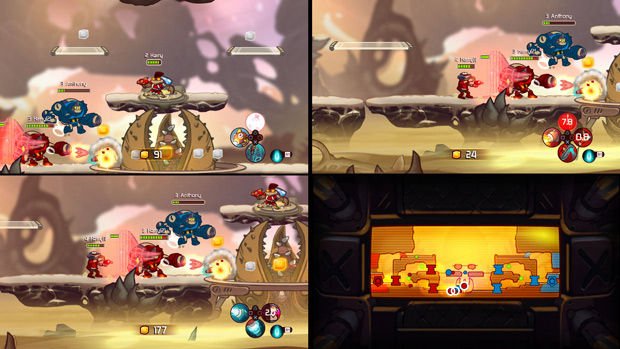 There have always been a few XBLA and PSN titles that come to mind instantly, whenever someone asks for a good game to play with friends. Castle Crashers was one, Dungeon Defenders was another, and Awesomenauts easily makes that list. Sometimes you might lose at the hands of a better team, but even if it makes you ragequit, you’ll always come back for another round or two and you’ll always learn some new tricks along the way. After playing it for a couple of days straight, I only reached a vague level of mastery over one hero with one specific build, and it will likely take me weeks before I can say I’m any good at all with any of them.

The six heroes offer something for everyone, and some people will probably dislike a few heroes that others will love. With more heroes to follow as future content, some may worry that Awesomenauts may suffer the same fate as Dungeon Defenders did on XBLA. However, any new hero content will fall well under the size restrictions imposed by Microsoft, so there is no reason to hold off and wait for a potential PC version down the line unless you don’t own either console. Perhaps the game would also benefit from a different mode down the line, such as a Domination/Dominion variant, but what is there in terms of content right now is well worth the price of admission alone.

Awesomenauts is one of the first great party games of the year, and it may well end up becoming the best. Get some friends together, try out the 30-minute online demo if you’re unconvinced, and you’ll have a blast whether the term MOBA frightens you or not.