I feel as if I’ve cooked more in video games than I ever have in real life or ever will.

There are so many compelling choices right now, from lighter arcade co-op experiences like Overcooked to more intricate simulation games like Cook, Serve, Delicious. One title I’ve been racking my brain over lately leans far more in the latter direction. Instead of testing your reflexes, Automachef challenges you to mentally break down intimidating logistical problems into smaller, more manageable chunks.

It’s a game entirely about building automated kitchens, and when I close my eyes now, all I see is an endless array of robot arms and conveyor belts. It’s like I’m back in the Incredible Machine days. 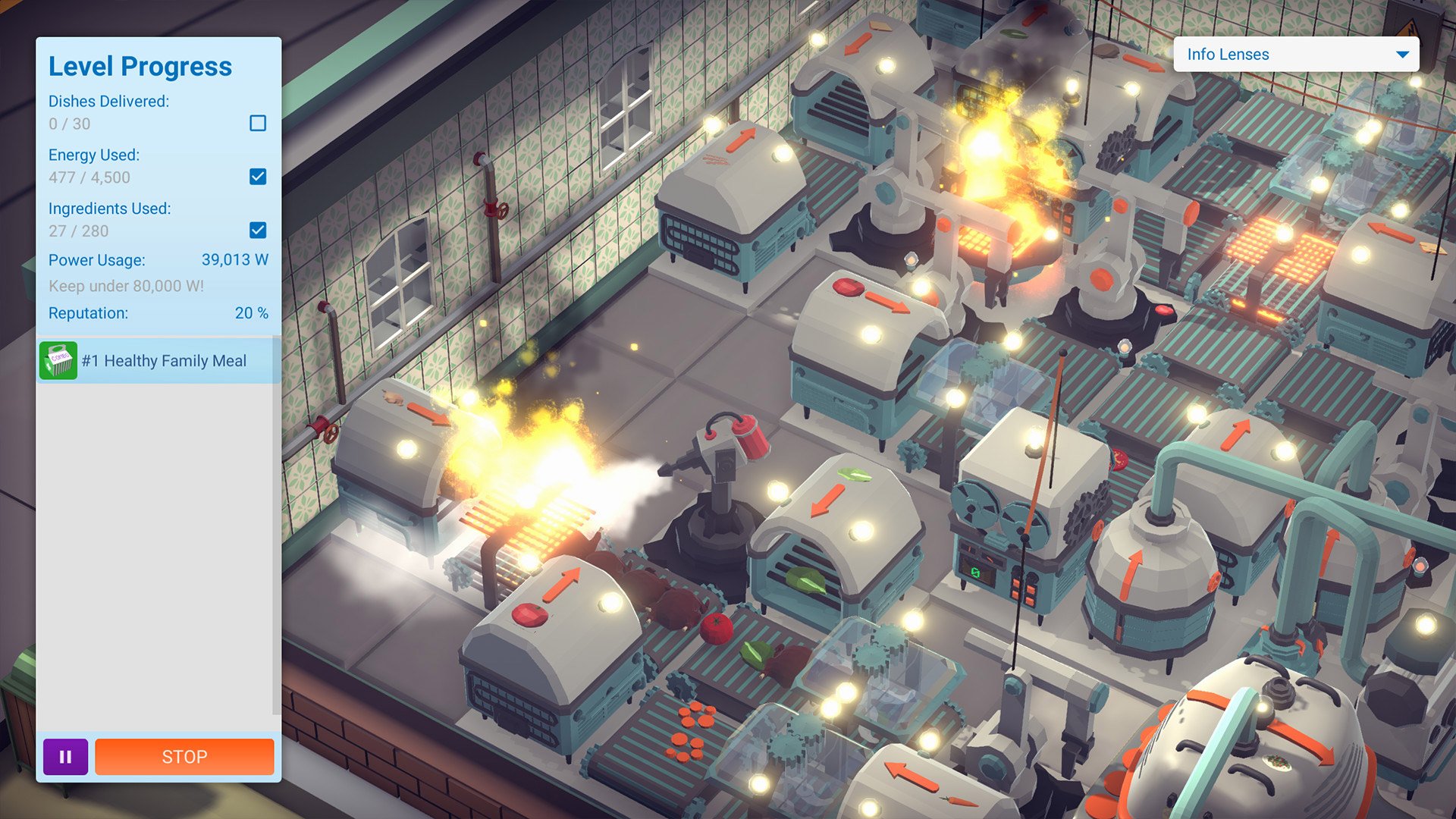 Automachef might look simple on the surface, and it does start out that way, but this is a long game, one that isn’t afraid to let you stew until you reach a moment of clarity and pull off the impossible.

During each level, you’re asked to deliver a certain amount of meals to hungry customers who can trickle in or bum-rush your fine establishment (which tends to happen at the worst time). The majority of Automachef is spent planning, creating, and tinkering to improve your kitchen design. There’s a ton of back-and-forth as you run simulations, watch your factory do its thing in real-time (or fast-forwarded), and return to fix any bottlenecks you just discovered. It’s not enough to follow the flow-chart recipes and get the correct food from point A to point B under budget – you have to do so efficiently.

While each level follows the same general structure, there are a slew of constraints – time, space, money, power consumption – to throw a wrench in your plans. That last factor is particularly devious.

You’ll plop down dispensers to dish out the necessary ingredients, use food processors, fryers, and grills to prep them, and assemble everything together in one magical machine that spits out a finished meal. Of course, you’ll need to use machinery like the aforementioned robo-arms and conveyor belts to transport this stuff. And did I mention that all of these machines need to be adjusted for the objective at hand? By default, dispensers create ingredients every five seconds, and without oversight, that’s going to lead to a clogged-up mess down the line. Thankfully, there are tools to give you proper control.

While you can tweak some of your machines’ values using quick, largely intuitive menus, the real MVP of Automachef is the Order Reader, a blessed contraption that can dictate the behavior of other devices.

Using Order Readers, you can tell machines to detect specific orders and then, for example, have them perform their action once, or twice, or however times you need. Maybe you have too many wasteful appliances. You could set them up to turn off after a certain amount of time has passed to conserve energy. Or – and this is where the game stops messing around – say you have to deliver restaurant and take-out orders. Food can spoil if it’s left unattended for too long. A flood of customers can arrive all at once. Your assembly line needs to be smartly laid-out and finely tuned to meet everyone’s needs.

Some levels took me 15 minutes or less to figure out and execute. Others took well over an hour. It’s worth pointing out that Automachef has a 30-level story campaign (with optional content) alongside a separate Contracts mode. The former revolves around a maniacal robot with grand plans, while the latter involves taking jobs, earning cash, and funneling it toward machine unlocks as you see fit.

Early on, the trick is to figure out which machines do what and how to get them to play nicely with one another in an elegant, cost-effective way. Further in, you’ll know how to create every meal, but you might not have enough physical space to comfortably pull them off. My biggest challenge was definitely the risk of blackouts. Basically, some missions will fail you if you go over a certain energy threshold, to the point where you’ll need bespoke logic for most of your machines so they aren’t firing on all cylinders (while still operating quickly enough to meet delivery deadlines). It’s a lot to wrap your head around. 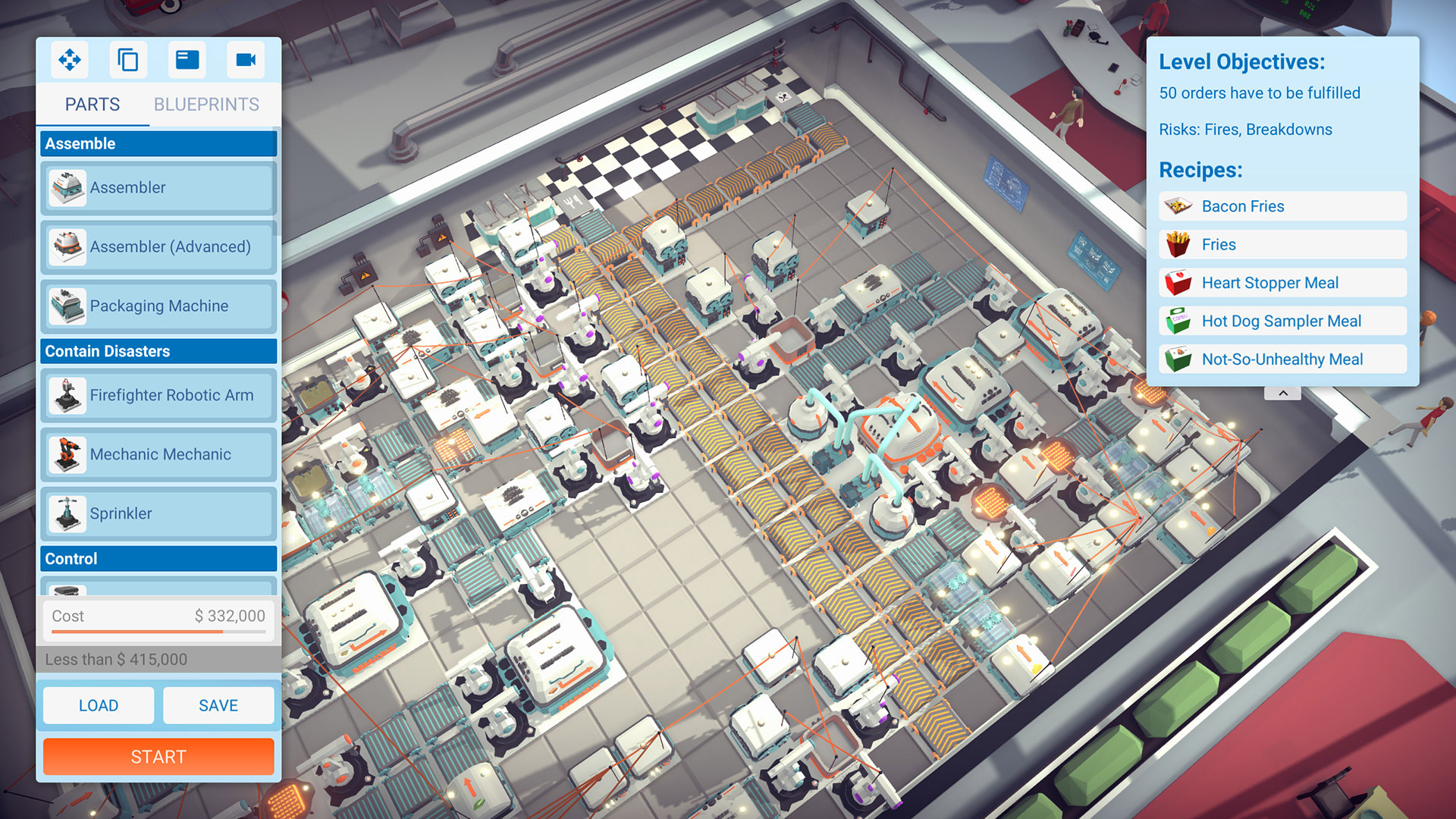 Automachef can be deeply satisfying and frustrating. It’s thrilling to run a bunch of tests, endlessly customize your kitchen layout and logic, and hit the “play” button knowing it’s going to run without a hitch. Then there are those moments of despair where you discover a fatal flaw and realize you’re better off starting from scratch. The highs are high and the lows are low, in other words.

I would’ve had a much smoother time if the campaign progression wasn’t quite so rigid. Every level has optional goals, and I would’ve appreciated a system where, say, clearing enough of those goals could let me bypass That One Tricky Mission I’m Losing My Mind Over Today. Whenever I got stuck in Automachef, I was really, truly, dreadfully stumped. It can be too unforgiving for its own good.

On the bright side, the Nintendo Switch version of the game handles better than I ever would’ve expected. While this type of game will be best played on a PC with a mouse and keyboard – it’s a grid-based sim game with a fair amount of menus, after all – the Switch controls work surprisingly great.

Automachef is home to some mind-melting challenges, but if you’re up to the task, you’re eventually in for blissful breakthroughs. Just don’t come in expecting to unwind after a long day at work.