Many people will tell you that Asura’s Wrath is unlike anything you’ve seen before, which is interesting because its components can all be compared to things we’ve seen for years. Elements of Dragon’s Lair, Heavy Rain, God of War and even Space Invaders make up this Frankenstein’s monster, with a sampling of every major anime to give the story that familiar flavor.

Nevertheless, there’s certainly something unique about a game that cannot decide whether it’s an interactive movie, a beat ’em up, a shooter or a pure anime. Yet while its resemblance to an untasted cocktail is tantalizing, its refusal to commit to any one concept proves to be its undoing. 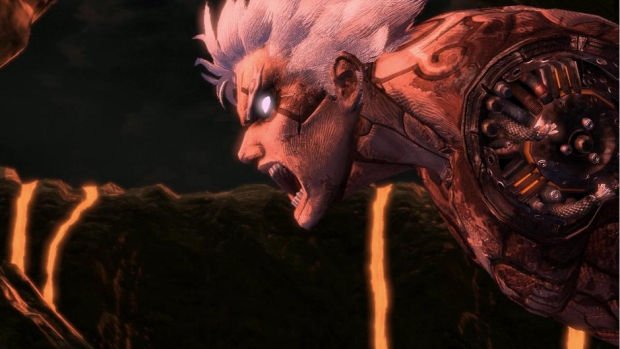 Asura is an angry, angry man. The personification of wrath, his temper makes him an able fighter as one of the eight guardians of the planet, tasked with defeating a cosmic horror that threatens the world. That’s enough to make Asura mad, but things get worse when his fellow guardians betray him — kidnapping his daughter, murdering his wife, and sending him to hell for 12,000 years. When he finally escapes, he’s just a little bit upset.

The plot of Asura’s Wrath will be familiar to any anime fan, telling the tale of a vengeful warrior who must fight his way through an army of eccentric and overpowered foes. Fist of the North Star blends with Ninja Scroll and everything else you remember watching on VHS in the nineties, producing a tale that comes off almost as a parody of Japanese storytelling. Smirking bishōnen and big-breasted women are surrounded by violently manly men who needlessly shout all the time with gritted teeth and pounding fists. It’s ludicrous, bombastic, and very loud. It’s both a love letter and a merciless pastiche of Japanese animation, through and through.

Now, had Asura’s Wrath been an anime, it would have been highly enjoyable. For much of the experience, CyberConnect2’s tale of love and revenge is an anime, with cutscenes that could rival even Metal Gear Solid in terms of length and silliness. So much of the game is spent simply watching, with pieces of cutscenes even repeating themselves shortly after having already been played. Pretentiously separated into episodes (with arrogant credit sequences thrown into each one), Asura’s Wrath seems to wish it was a television series as opposed to a videogame.

That isn’t to say the entire adventure is a hands-off experience. When it’s not shouting at you, Asura’s Wrath is being one of three things — a beat ’em up, a shooter, and a quick-time-event sequence. Much has been made of the fact that barely interactive QTEs comprise half the game, to the point where you might as well unplug the console and play Simon Says with real people. However, it’s not so much the frequency of the QTE segments that disappoints me, it’s the fact that not one of Asura’s Wrath‘s elements play off each other to create a unified game. Instead, it is a disjointed, segregated, spluttering fiasco, a game that never allows itself to build to a satisfying end because it can’t start anything without stopping first.

Most episodes follow a very predictable pattern. It starts with a simple beat ’em up section, in which Asura must take on either a group of monsters or a single, boss-like entity. These fights are theoretically indefinite, as regular enemies will continue to spawn and bosses have no health bars. Instead, Asura has a “burst” meter that fills whenever he gives or takes damage. The goal is to fill the burst meter without losing one’s health, so that Asura can unleash his rage and kick off the QTE sections. What will follow is a long-winded set of animations in which the player’s actions have very little influence. One is supposed to follow on-screen prompts to push buttons or move analog sticks, but even if one fails, Asura will often continue his work unhindered. Once finished, there will usually be another brawler section, followed by another set of QTEs.

At random junctures, there will be shoot ’em up sequences where Asura fires off magic energy balls with his fist. These sections are fast-paced, but overload the screen with information to the point where it’s difficult to see what’s happening. Dragging the reticule over targets will lock onto them, and once you’ve locked onto enough, you can send multiple strong projectiles into the opposing obstacles. Asura is moved around using the very same stick as the reticule, meaning that if you want to evade an incoming enemy, you have to stop aiming properly. Meanwhile, the right analog stick sits doing nothing. Still, this is a minor inconvenience, given how easy the shooting sections are. 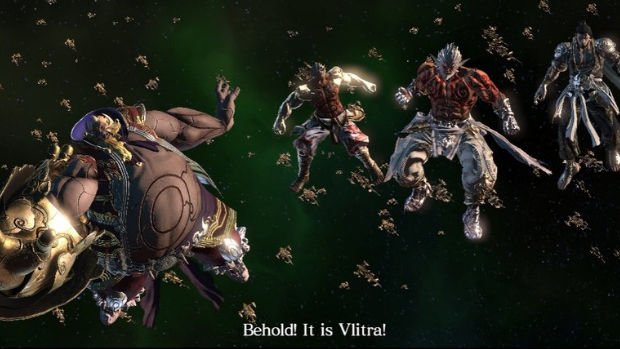 It would be easy to complain that there’s little hands-on gameplay compared to the amount of time spent watching semi-interactive movies. However, as I noted, that’s not the core issue. The issue is the lack of fluidity. Had Asura’s Wrath been able to blend the brawling, shooting and QTEs more efficiently, it would have been an exciting game that I’d proudly be able to rave about. Instead, the game won’t move onto one section without forcing you to watch a dull transition animation, or a static screen. The various gameplay elements never transition smoothly into one another to create a cohesive game, instead sectioning everything off. Not only that, but these segments are all so brief that it’s impossible to get invested in a single one. Just as you’ve gotten into the rhythm of a brawling section, you’re told to stop, wait a second, and then start with the quicktiming. Even the QTEs fail to excite at a most basic level, being very slow from an input perspective and giving you plenty of time between commands to sit and do nothing.

Ultimately, what happens is that you’re constantly being lifted up and suddenly dropped. Asura’s Wrath forever builds to crescendos that never happen. It is as close as gaming gets to that shuddering moment one spends before a sneeze, without the blessed, explosive relief at the end.

Only once does Asura’s Wrath bring its elements together, and it’s truly masterful stuff. After several hours in, Chapter 13 provides a level in which the player constantly moves from brawler to shooter to QTE and even throws in some speeding moments reminiscent of latter-day Sonic the Hedgehog. Furthermore, it does this all with such a beautifully liquid flow that it single-handedly proves the game’s entire concept. For this one chapter, all the things Wrath has to offer bleed into each other superbly, giving us a taste of the game that CyberConnect2 could have made. It doesn’t last, however, and then the game instantly subsides into the same old faltering routine. 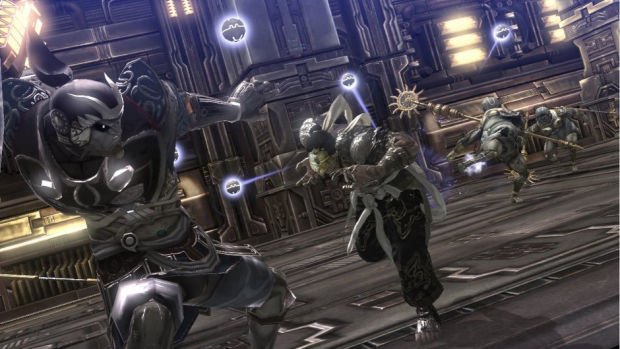 Quite why the developers chose to make it this way is a mystery, but it’s frustrating to a painful degree. Behind all the terrible implementation and gated content lies an incredibly solid combat system, based around counterattacking and performing devastating executions on downed foes. Although the core attacks consist of simple button mashing, every enemy has a unique moveset with patterns that require crucial recognition and swift exploitation. Punches have a real weight to them, and melee feels incredibly pleasurable. It just doesn’t last long enough before you’re watching movies of men shouting at each other and looking at hand-drawn screenshots. Nothing ever sticks around to satisfy, and it undermines what a good game actually lies underneath all the waffling crap.

Everything about Asura’s Wrath seems designed to waste time, which is especially egregious since it takes only a few hours to beat. Every chapter must be manually started, for example, and there’s a long-winded set of result screens at the end of each one. At one point, I started a chapter which made me move Asura slowly along a path. I did so for two or three seconds before the screen faded to black, then faded back up to show a little girl waving for less than a second, then faded back to black and returned to Asura. I then walked him forward for another three or four seconds before it went to a big cutscene. 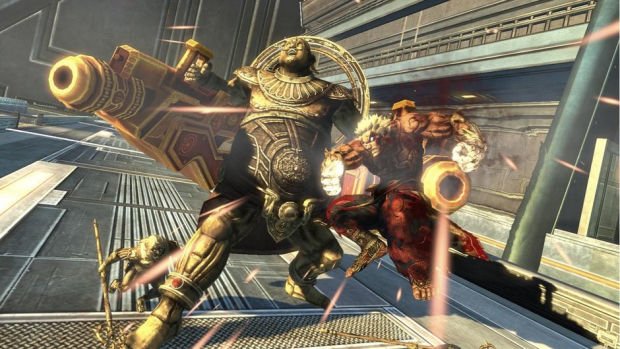 If you took out all the time spent doing nothing in Asura’s Wrath, you’d not have much of a game left. What you do play is solid, but you barely play anything. One spends ages waiting to play, then gets maybe a minute of interactivity, before being told to shut up again while the game sits on the lavatory and fiddles with itself. It’s a party that you’re not invited to, but have nevertheless been made to stand outside the house and look in from the window, hoping someone will toss you a scrap of food. Asura’s Wrath is having plenty of fun on its own and rarely notices the player is there.

With its gorgeous animation, wonderful soundtrack, and fantastic cast of audacious characters, Asura’s Wrath is a game everybody should want to love. I certainly wanted to love it. I desperately tried to tell myself I was enjoying the show, but no matter how many times I attempted to laugh at Asura’s overwrought screaming, no matter how many times I told myself Steve Blum’s voice acting (as the flamboyant Augus) was hilarious, I had to admit that I was being seduced by a game that had no intention of delivering on its honeyed promises. Any charm and amusement that Asura’s Wrath provides only serves to highlight what a wasted opportunity the entire affair is.

Asura’s Wrath would have been a superb anime or an excellent videogame. However, it couldn’t decide what it wanted to be and instead served up tiny slivers of both, pulled together in a fashion so clumsy that you can see the stitching from miles away. It’s not so much a game as it is a collection of concepts, roughly thrown into the same box and jumbled around in the vain hope that something good would come out at the end. Unfortunately, no one element is ever given enough time to shine, and for all its attempts to be something special and unique, Asura’s Wrath is nothing but a disappointing selection of inconclusive ideas.