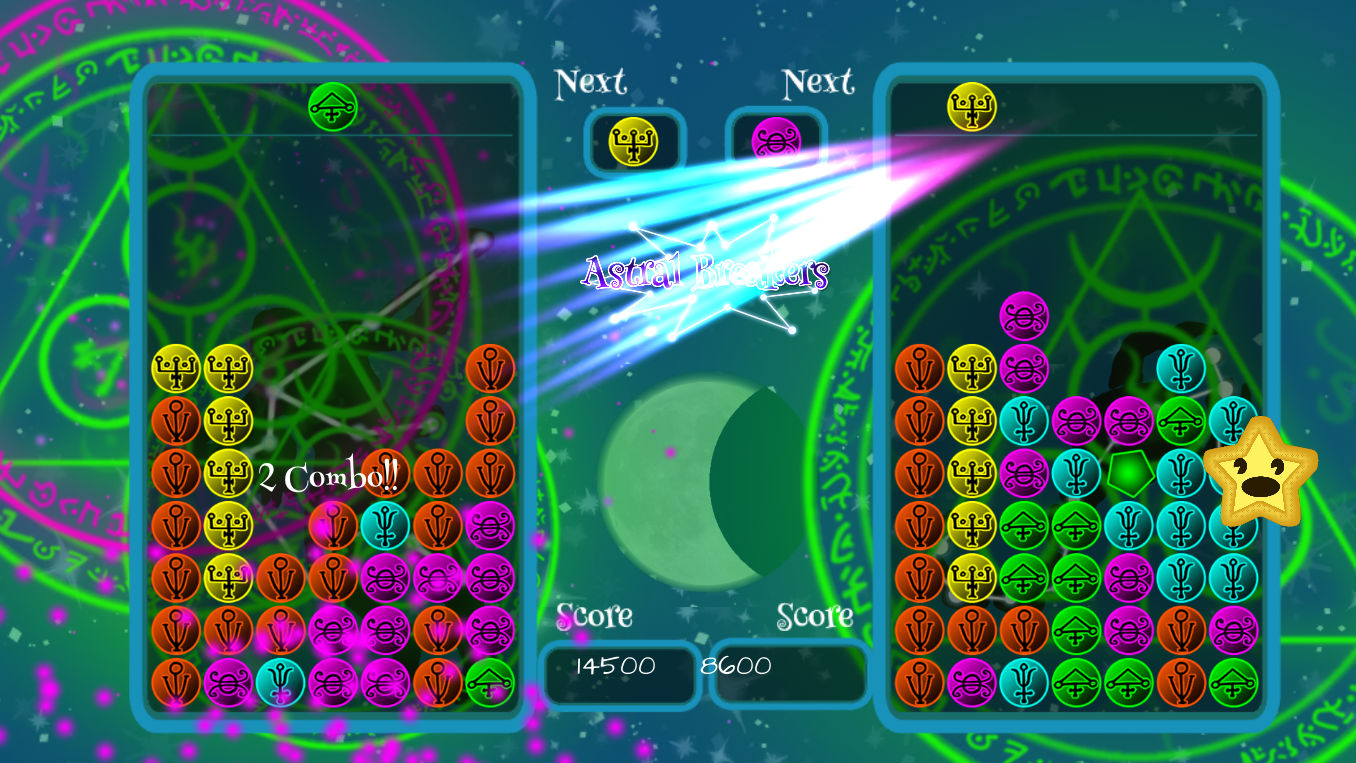 I’m lucky that I’ve had a number of friends to play games with growing up. Before the dawn of online play (I didn’t leave the house for a week when I discovered dial-up Diablo and Xbox Live), the only option was to pull up a chair and play locally.

Puzzle Fighter was the object of my obsession for many years with friends, especially the convenient Game Boy Advance version. Astral Breakers lets me relive those glory days somewhat, but the presentation leaves much to be desired.

The gist of the story is that a Big Bang-style event creates “Astral Spheres,” which the 12 Zodiac constellations then fight over as they vie for power over the universe. Kira, a helpful star, has tasked you with restoring order. It’s cute but shallow, with very little in the way of world-building or exposition. It also doesn’t help that the sidebar dialogue consists of uninspired meme-filled jokes.

By the time you actually start up the game though, things get much more exciting. In essence, you’re dropping orbs down in a straight line, trying to connect as many like-colored ones as possible. After dropping several orbs your cursor at the top of the screen will start glowing, which allows you to press a button to drop a “breaker,” which will blow up any connecting orbs of that color. Think Puzzle Fighter, but you get to choose when to drop breakers.

What’s really cool about this system is that you control your destiny. Players can set up chains by preloading breakers at all sides of structures, all of which are easy to see due to their bold color schemes. It’s fun to take risks and build massive combos (here’s an example), which will in turn drop more trash (the puzzle term for orbs dumped on the opposing side’s screen) on your enemy, screwing up their board. It’s fast, and the controls are responsive.

There’s also another layer of complexity involved with said trash drops, as each character has a different style denoted by an “intensity” rating. High intensity characters will drop easy to solve trash but at a faster rate, changing up the way you approach the game, and forcing players to act quickly and make lots of smaller moves. On the flipside, low intensity players will rely on meticulous big combos. After playing for a bit, you’ll also have the opportunity to design your own sign and style, which is neat.

Solo mode is very limited, because after you’ve defeated all the opposing zodiac signs in combat, it ends. Naturally the difficulty ramps up towards the end where the AI will start putting up more of a fight, but since it only takes roughly 30 minutes to complete, the good stuff is over before it starts. Thankfully there is a versus AI mode on top of the campaign, but it also has the same crescendoing difficulty scheme which can get boring during that initial climb.

To really enjoy Astral Breakers to the fullest, you’ll need a friend, especially since there’s no online play. To augment your standard versus mode there’s also a co-op setting, which can get really fun as you attempt to score as many points as possible. Like most versus puzzlers, if you can find someone to share it with, you’ll get a ton of leeway, especially given the strong foundation.

I wish Astral Breakers had a more involved single player component and a smoother visual style, but for the most part, there’s a serviceable core experience here. Just don’t dive in alone.